It is not generally known, but the Regatta has its very own GHOST STORY!
In 1869 Charles Dickens published "THE PHANTOM OF REGATTA ISLAND
Read this, and you will never be able to see the start and Temple Island in the same light again! 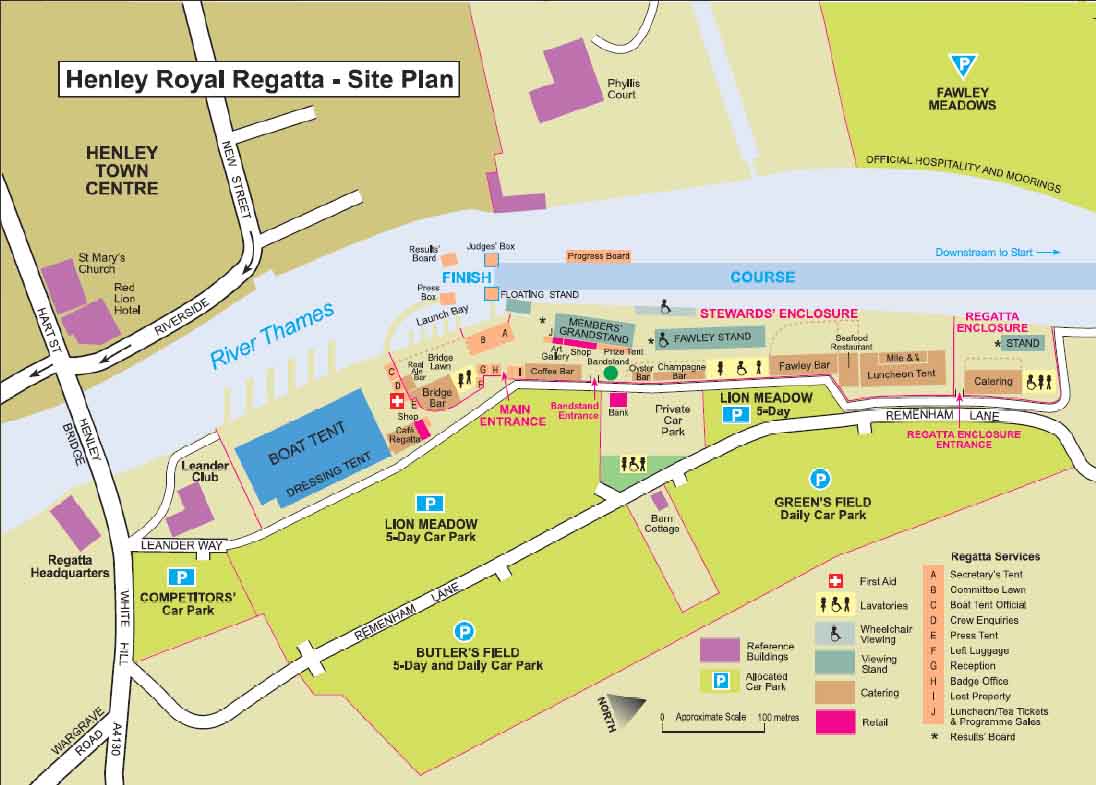 The Rabbit’s Guide to Henley Royal Regatta
History of Rowing

When all is said and done, however, Henley lives mainly for its regatta ...
Henley is only quite all there in the hectic regatta days ...
The town has that curious absent-minded air, shared by places like Epsom and Lourdes, of always getting over, or just preparing for, the great and rare event ...
Then its commercial waterfront, full of slap-and-tickle-girls, bursts into life ...

LONDON OF TODAY [1890] An Illustrated Handbook

HENLEY REGATTA
Since the old pageants of Venice, nothing has been produced to excel the beauty of the scene at Henley during the regatta. It is far and away the prettiest festival of the kind London, or indeed England, has to offer.
Formal aquatic procession on the Thames has dwindled to the "Fourth of June" celebration at Eton, for the Lord Mayor's pageant no longer returns by water to the City from Westminster.
Athleticism has taken the place of antique ceremonial; and we have now at Henley, apart from the cause of the gathering, such an assemblage of parti-coloured boats, awnings, flowers, and flags, not to mention pleasant company, as could hardly be matched anywhere. 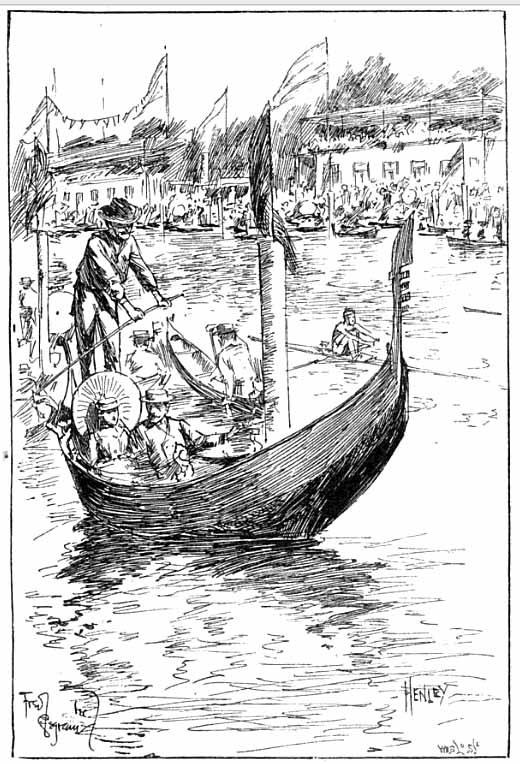 The River Carnival of July

Fine summer weather is indispensable to the full enjoyment of the regatta, for then the charming upper reaches of the Thames are seen at their best.
The visitor who can command the hospitalities of a "house-boat" is to be congratulated. At the annual season of festivity, all the hostelries and available ancillary lodgings of the little town are occupied. The only method left of enjoying the scene in reasonable comfort is that of having a home on the waters, a floating house of one's own (or a share of one with a friend), "a fluviatile analogue", as has been said, of the four-inhand at Ascot, and the family landau at "Lord's" during the Universities' or the Public Schools' cricket matches.
Excitement in the sport going forward is agreeably tempered by strawberries and cream, and "cups" and dainty drinks mingled and iced too wisely and too well. 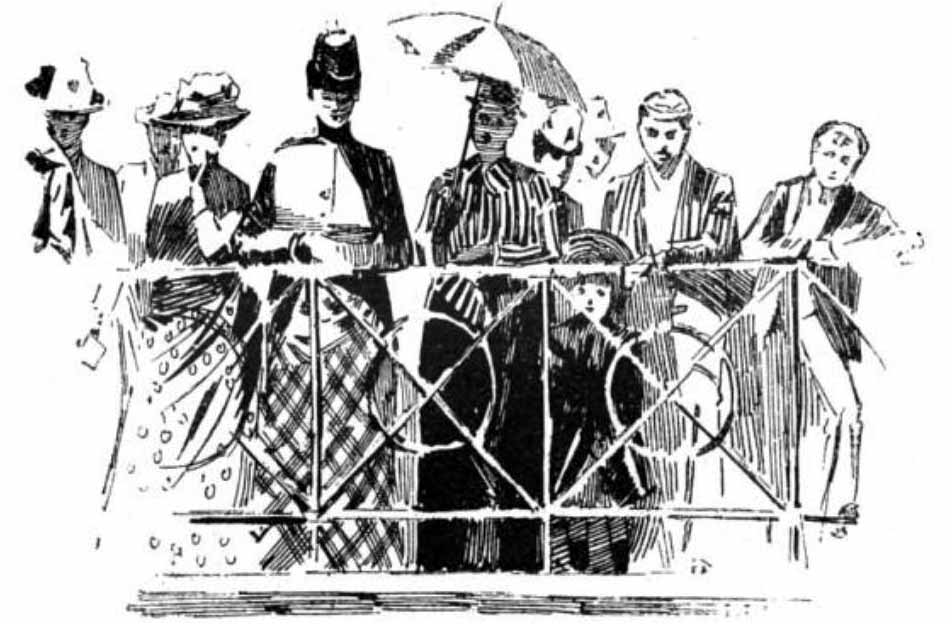 From a little country jollification, Henley Regatta has, like Ascot Races, been growing to the proportions of a national holiday, though, luckily, the distance from London and the absence of a betting-ring, keeps the rougher people away.
The competition of rival clubs and crews at Henley is fiercer than of yore. The absence of the representative University crews, which formerly met there, has been amply compensated by the presence of the numerous boating clubs which have grown into existence since the Oxford and Cambridge crews rowed their first race over the Henley course.
As watermen's regattas and rowing matches fell into discredit on the Lower Thames, clubs of amateurs increased and multiplied. Selected crews of the best of these clubs, from the Oxford and Cambridge Colleges and the Public Schools, and occasionally from America and France, combine to give a zest to the Henley Regatta, by exhibiting their "best form" in the several competitions. 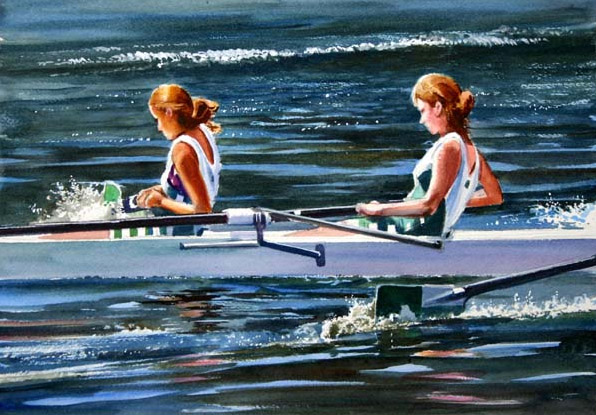 Regatta, Ashley Bryant
You can see the tension in the shoulders
- and the wash at the top of the picture confirms it -
they are being beaten!

All the world over, Henley is famous for its Regatta, which is the most important of all aquatic festivals, and is not less a trial of skill between the best oarsmen on the Thames, both of clubs and colleges - attracting besides, lovers of aquatic skill from every quarter - but at the same time, a fashionable gathering at the close of the London season, in some ways comparable to Ascot.
Nowhere can the life of the river be seen so brilliantly vivacious as during the Regatta at Henley. The hustling crowd of steam launches, skiffs, punts, dinghies and canoes, is diversified, at times, by every kind of imaginable craft that can be navigated on the river, and gondolas, and even sampans, and various half barbarous boats, sometimes add a touch of novelty to the scene.
Houseboats line the banks in stations carefully marked out, and vie with one another in their schemes of colour and their floral decorations, and some, well known to habitues of the river, are looked for year after year. There is indeed a certain prejudice against these floating dwellings. Unbounded pleasure is afforded to their occupants, and they add a good deal to the charm of the spectacle; but the riparian owner does not always relish their near neighbourhood, and, backed by the necessity of somewhat clearing the course at Henley, a recent edict has been issued, prescribing that the gay people who throng the boats at the Regatta must be owners or genuine guests, and not visitors turning the boats into floating hotels. A little heart burning results both from the stationing of the boats, and the fact that the owners, who add so much to river pleasure and river-side profits, paying besides a round sum to the Conservancy in fees, are not allowed to make a little hay while the sun shines at Henley.

The rise of Henley from an insignificant little meeting to the Royal Regatta of today is a notable illustration of the rapid development of public interest in athletics and out-door occupations during recent years.
[ I would point out that "the insignificant little meeting" which was the first boatrace in 1829 attracted an estimated 20,000 people - so perhaps it was a case of discovering an already existing public interest, rather than developing that interest? In evidence I show the 1853 regatta which has evidently an enormous public presence and organisation] 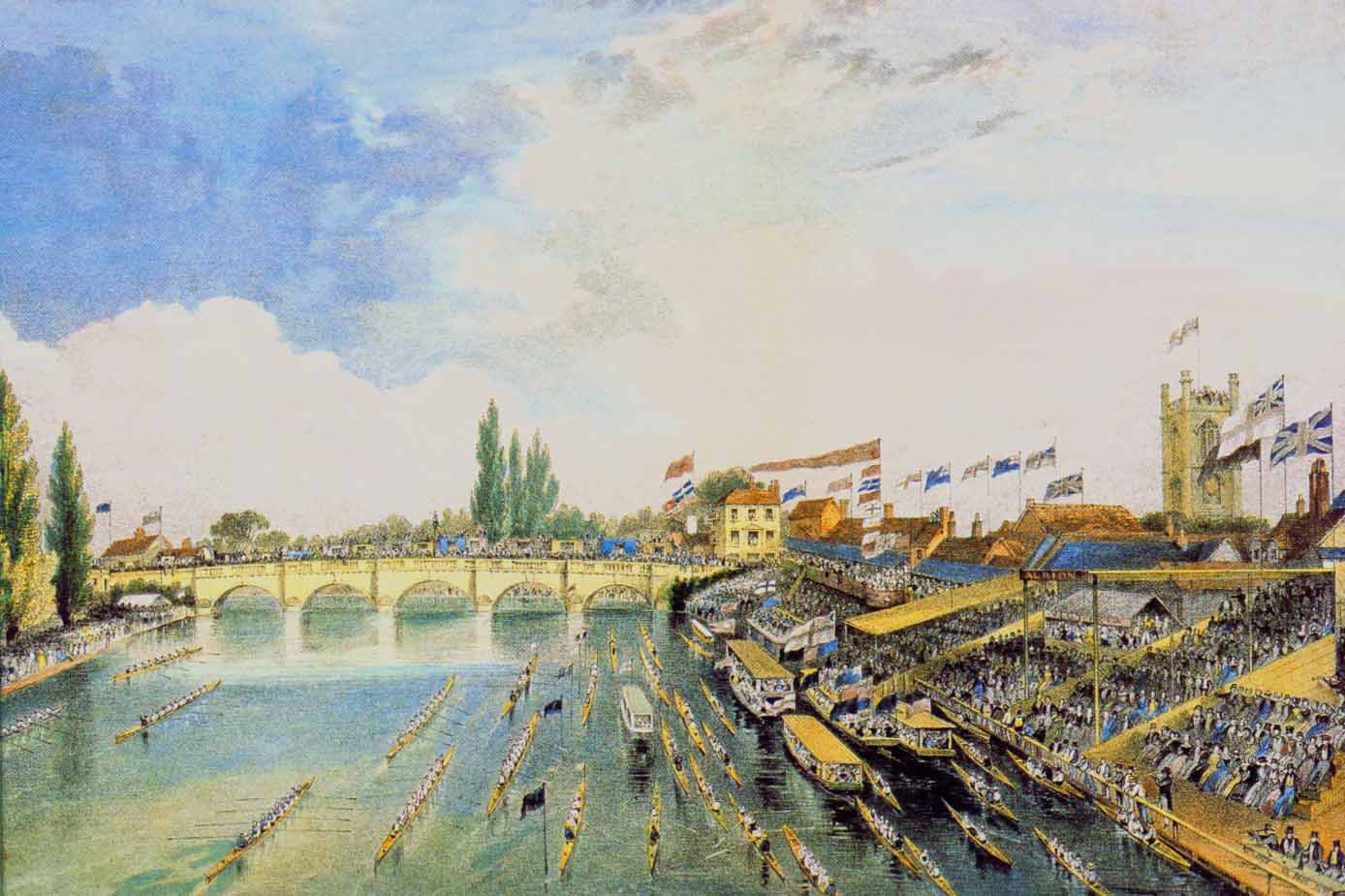 The University boatrace and the Regatta had a common origin. They date practically from the year 1829, when the Oxford and Cambridge crews met on what is now the Regatta Reach at Henley, and friends of the competitors and townspeople lined the banks, and gave themselves up to a limited degree of festivity.
Henley Regatta, proper, cannot be said to date earlier than 1839, when the First Trinity boat from Cambridge took the Grand Challenge Cup for Eight Oars, then the solitary trophy of the meeting.

On the Saturday evening, around 10pm, an unofficial part of the regatta are the fireworks let off on the right bank behind Fawley Meadow. Anywhere on the second half of the course (nearest Henley) is a good place to see them from. The river has in the past been very crowded with boats mooring several deep along the booms and banks. The crowd get quite carried away ... (And some of them have to be ...) I think some people must come for this alone and see nothing of the rest of the regatta. It used to look like this - 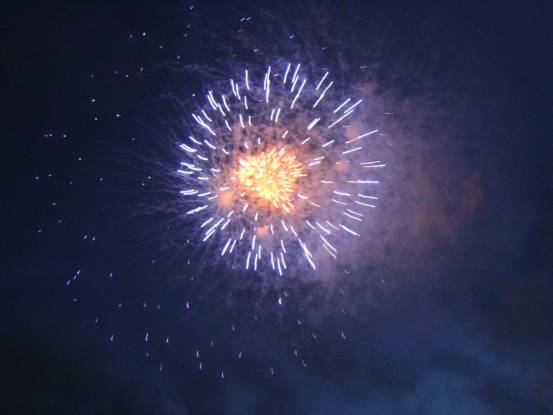 And the difference? In Victorian days it was people who illuminated themselves and showed off their beautiful clothes with coloured lanterns - and now its all flash and bang in the darkness - and the people are just passive spectators.

Henley Royal Regatta is the one great British sporting event which includes a Christian service on Sunday, (the finals day).
At 9.30am [always used to be 10am] in Henley Parish Church there occurs what I can only describe as “Rowing Matins”.  With a full church Anglican Chant is sung as lustily as it was fifty years previously in the chapels of the public schools by many of these very same people;  the chairman of the Stewards reads a lesson; the local choir sings beautifully; they dig out some rowing cleric to preach a sermon.  I am becoming a connoisseur of these sermons over the years.  They come in two flavours.  There is the rowing sermon and the “you are men of influence” sermon.  The rowing sermon largely centres around “we all swing together” or words to that effect.  We are reminded of the eight in the bible (St Paul talks of “the ark, wherein eight souls in all were saved” – and every rower knows coxes are damned – in the present if not in eternity).  Then there is the observation that the church is at the finish of the Henley Course.  The cox cannot see where he is going for all these hairy oars persons flailing about – but look above them and there is the church in the distance – aim for the church and you can’t go wrong.  One daring preacher used the parable of the Unrighteous Steward – but it was alright, it worked, they made him a Regatta Steward anyway.  [That was in 1986 - and he preached again to similar effect in 2011. One has to have sympathy for a preacher repeating himself when the gap was 25 years - but memories are long at Henley Regatta! ]
In 2005 we had - how to make progress seated facing backwards.  (This was, to my mind, a metaphor too far.  Christians ought to be radicals or they are nothing!)
Clearly somebody agreed because the reading on which the Bishop of Ely preached in 2006 had "Forgetting what is behind and straining toward what is ahead, I press on toward the finishing line to win the prize ..."
In 2007 Professor Gomes of Harvard preached a delightful and encouraging sermon on "Be not afraid" - the words of Christ to the oarsman on the lake in the storm when he walked on the water.
"Be not afraid" of losing or winning. "Be not afraid" in this world of fear.
In 2008 the Rector of Henley preached on that same text with a slightly different twist. His sermon was full of humour starting with the words of the Regatta Chairman (or was it God - hard to tell the difference in regatta week) - speaking of the poor painting of the regatta headquarters "Repaint, repaint and thin no more!". He ended with a splendid misquotation of the Psalm - "They that go down to the sea in boats - have gone too far and missed the start and will be disqualified by the stewards!"
Finally in the service a visiting crew (Harvard University in 2007, Stellenbosch University in 2008) takes the collection.
Never let it be said that there are no changes at the Regatta. The National Anthem has been moved to the end of the service! And so the service ends.  There is just time to get suitably refreshed for the first race at 11.30am [used to be 12 noon].