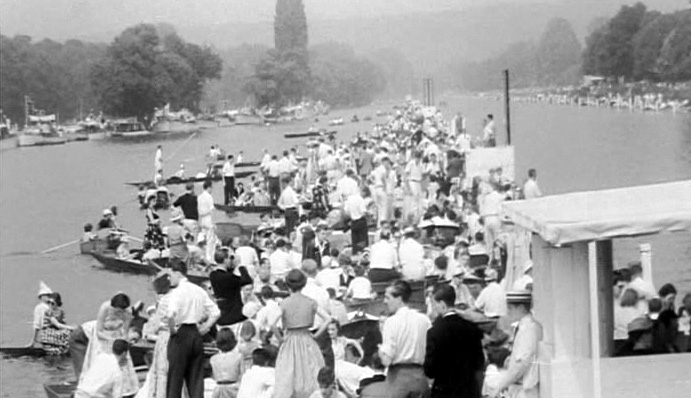 Spectators on punts and skiffs, 1953

BIG RED TAKES IT ALL
First the Russians, then Yale, fell before mighty Cornell's drive to victory at the Henley Regatta
John Lovesey
As cornell's crew moved its shell Spirit of '57 away from the landing stage on the last day of the Henley Royal Regatta, they passed Princeton's 150-pound eight on the water. Princeton had just won the Thames Challenge Cup, and one exuberant Tiger oarsman yelled across the Thames: "Go get them, Cornell!" Cornell's cox, Carl Schwarz, barked a crisp order, and his well-drilled, massive crew leaned into the oars and pulled to the start for their race against Yale, in the first all-American final of the Grand Challenge Cup. A becapped and blazered Henley veteran watching them go murmured: "Today they prove whether or not they really are the finest crew in the world."

The race between Yale and Cornell was to be the final bout of an intense-almost bitter-two-year rivalry. They were probably the finest crews in American rowing history. In 1956 Yale beat Cornell for the honor of representing the United States at the Melbourne Olympics. The Big Red had never got over that. This year, before coming to Henley, Cornell had beaten Yale twice, once by a length and once by a foot. Yale had never finished stomaching the two defeats.

The last time each university had sent eights to Henley was in the 1890s, Cornell in 1895 and Yale in 1896. In both cases the American crews lost.

As fate would have it, and Yale certainly would not admit otherwise, both crews turned up at Henley for the 1957 Royal Regatta. By a further coincidence, the draw for the Grand Challenge Cup, Henley's premier award for eights, put Yale and Cornell in opposite halves of the competition, meaning they could meet in the final. Of the four other crews in the contest only a Russian eight, Club Krasnoe Znamia, stood in the way of an ail-American ending, and a terrific climax to a rowing rivalry.

Yale arrived on the river a week before Cornell, and Yale's coach, Jim Rathschmidt, expressed confidence. His present crew, Rathschmidt said, minus four of the Melbourne eight, had not so far shown the speed of his Olympic combination. But Rathschmidt felt that they "might be capable of some really fast times now."

Both Rathschmidt and Cornell's quiet coach, Harrison (Stork) Sanford, had to adopt the Henley practice of coaching from the towpath. Astride a borrowed bike, coping with a megaphone and a stop watch, tall and lanky Sanford made a hilarious figure.

Sanford was worried. Although he considered it a sign of champions, his trouble with Cornell, he said, was inconsistency. "My big problem," he explained, "is bringing them to their peak at the right time on the right day."

Cornell soon proved their coach could do it. The Grand Challenge draw gave a bye to Cornell into the semifinals, where they met the Russian eight.

Club Krasnoe Znamia had been picked for Henley in national trials, so the race was virtually an America versus Russia match. On Friday throngs of spectators lined the banks and floated in punts. Even the elegant throng in the exclusive stewards' enclosure was impatiently excited.

As Cornell expected, their red-vested opponents put in a terrific burst at the start, and led for most of the race. At one point Club Krasnoe Znamia's tough, well-muscled and bronzed crew was just about three-quarters of a length ahead, but Cornell never let it get out of striking distance. When the Americans finally pulled out all the stops on the last section of the one-mile 550-yard course, the Russians had no answer to Cornell's amazing power. Cornell crossed the line a length ahead and clocked the astounding time of six minutes 30 seconds, eight seconds better than the previous best time in the Grand Challenge Cup. Since 1839 only three other races have been rowed in less than six minutes 50 seconds.

Soon after, Yale won its semifinal and set the scene for the climactic day.

On Saturday morning Jim Rathschmidt paced nervously, chain-smoking cigarets. He said he had planned for Yale to beat Cornell "in the body of the race." He added: "We're in great shape and ready to go."

Cornell's cox, Carl Schwarz, reckoned his crew's chances were better than ever and explained: "If we row like we did yesterday, we can beat Yale. Our only worry is what our race against the Russians did to us."

It started at midafternoon in scorching heat. The course was slow. In place of the tail wind, which had helped Cornell set their record the day before, there was a head wind.

Cornell started high, stroking 45. Yale pulled at 42. But at the quarter-mile neither crew had gained an advantage. Shortly after, however, Cornell drew ahead by a deck. Schwarz let Yale know about it. At the mile Cornell drew ahead a little more, increasing its lead to a quarter of a length. Yale stepped up its stroke, but to no avail. Near the end, Schwarz called for Cornell's full power in the last 30 strokes. Explained Cornell's Stroke Phil Gravink afterwards: "It's like doing a sprint." The burst sent the glistening cedar shell past the finish line half a length ahead of Yale. The time was six minutes 53 seconds.

Afterward, in the boathouse, Yale's oarsmen could hardly speak. Looking over at the happy Cornell men, Yale's sweat-stained captain, Don Beer, could only say: "That's a great crew there."

Jim Rathschmidt sadly explained, "We rowed as well as we could, but it wasn't good enough."

Stork Sanford cheerfully allowed himself to smile about his crew's great triumphs on two successive days. "Strange thing is," mused Sanford, "they seemed fresher after today's race than yesterday. We have a great deal of respect for Yale, but we reckoned if we could hold them over the first mile, they couldn't beat us on the finish. Our race worked out as planned."

The Big Red had won all the honors rowing had to give. But the final honor-the one the crew wanted most-came not from Henley, but from Sanford, a quiet man not given to superlatives. "This Cornell crew," he said deliberately, "is the greatest crew I've ever had."