THE opening salvos of the Ladies' Plate raised the temperature at Henley yesterday, not least with a highly controversial race between Rostock/Heidelberg and the prospective British lightweight eight, Leander/ Nottingham County.

The Germans, a selected crew and the national under-23 eight, with an advantage of over three stones a man, led all the way but were frequently warned from the Barrier onwards for their steering. In the closing stages, with umpire Micheal Johnston calling them repeatedly along the enclosures, they finished 1.25 lengths ahead with their blades washing the lightweights' blades. The lightweights appealed but there can be no appeal for interference.

The lightweights' coach, Maurice Hayes, claims the blades clashed when the Germans were being warned earlier and the cox raised his hand at the time, which was apparently ignored by the umpire.

The time was the equal fastest of the day and in the semi-final the Germans will meet Molesey, who scored over the Crabtree/Eton Vikings crew, comprised of several former Cambridge Blues. Molesey are the last home crew in the event.

The University of California, Berkeley, had to go a bit in their heat to overcome a spirited final burst at 42 from the South African quad crew, Trident, who, coming back from a deficit of .75 of a length at the .75 of a mile, lost by only a canvas.

The fourth semi-finalists, Brown University, had no problems in disposing of Tara from Ireland, equalling the Germans' time.

Ghent and Garda Siochana both came through their quarter-finals of the Thames Cup in opposite sides of the draw. Neither were unduly pressed, Garda putting out Cascade from Seattle. Garda's semi-final opponents will be Molesey, who were faster at the intermediate points when overwhelming Thames Tradesmen's.

The Prince Philip Cup also began today. London, with the pair defeated yesterday by Greg Searle and Ed Coode in the bow seats, proving far too strong for the 16.5st Mulheim four stroked by the former Cambridge Blue Tim Wooge.

The Leander/Brookes Prince Philip four, who finished third in Vienna and Munich in a coxless boat, looked unsteady but won comfortably against Neptune Belfast.

The surprise of the day was the defeat of the selected Sydney Britannia four, one of the favourites, by Cambridge University by one length.

In the Silver Goblets, Searle and Coode turned their four stone plus weight advantage to better use, easily defeating the Nottingham lightweight twins, Paul and John Stevens.

On yesterday's form the Australian and Dutch potential Olympic quads look set to meet in the final of the Queen Mother Cup.

In the Fawley Cup the boys from Marlow/Borlase's School can count themselves unlucky, having survived the qualifying races, to have drawn the top junior squad crew, Windsor Boys'/Burway, who were too good. However, for two of the losing crew it was a miracle that they were competing at all. Karl Offord had had cancer in the muscle of his right arm and lost its use for a year, while Liam Cairns had a serious accident in which he nearly lost his left arm. It is a tribute to the skill of their surgeons that these two were able to race.

2007: 4 - 8 July
Strong stream conditions added considerably to the 'length' of the course. It was being said that the flow was approximately ten times summer levels. (But note this does not imply ten times the speed of the current - presumably the weirs were managed to reduce the current as far as possible for the regatta.)
There was some question as to whether the stream at the finish favoured Berks. Certainly sitting in a punt on the boom at the finish the punt was actually making a slight wake and it appeared that the current might be slightly less on the Berks side. I can't imagine it making more than a few feet difference - but then the closest result was only one foot! It was noticeable throughout the regatta that the competitors on the Bucks side moved towards Berks whenever they could.
Between Hambleden and Marsh Locks it appeared to me that Henley Bridge is the most difficult point in high current situations.
2007: The Grand was won by Shawnigan Lake School and Victoria City R.C., Can. in 6:24
2007: The Diamonds was won by A.W. Campbell (The Tideway Scullers' School) in 8:04
2007: Full results 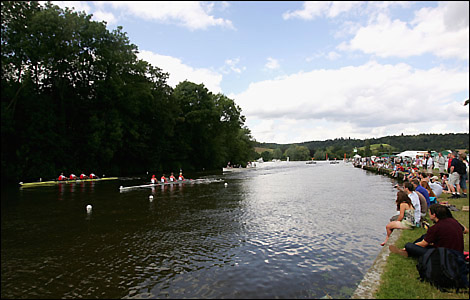 2008: 2 - 6 July
I got soaked four days out of five - and I was sunburnt - and I had to punt in a higher wind than I ever remember before. An unusual announcement was final races delayed because of weather. [ There was almost a cloudburst. ]
I wonder if this is global warming - or has Henley weather always been like that? On the Sunday there was almost no crowd at Remenham (which was very crowded the day before.)
Highlights of the week include Eton rating 22 leading Bedford Modern rating 34 by three lengths.

The Stewards' Charitable Trust was formally established by the governing body of the Regatta in June 1988. The principal objective of the Trust was to provide funds to encourage and support young people (still receiving education or undergoing training) to row or scull. In May 2003 (fifteen years after its inception) the Trust had given away over £1,000,000 in the pursuit of these aims. By the end of 2008 this figure had risen dramatically to £1,880,000.
2008: The Grand was won by Victoria City R.C. and Kingston R.C., Can. in 6:29
2008: The Diamonds was won by I.J. Lawson (Leander Club) in 8:10
2008: Full results

THE FLOATING GRANDSTAND
Members will have noticed a difference at the Finish Line this year. The old Floating Grandstand - the 'Floater' - was constructed in 1952 and served us well for nearly sixty years. Sadly an inspection by Marine Engineers has condemned the sub-structure and it will be consigned to the scrapyard in the Autumn.

As a temporary measure for this year's Regatta there is a double-decker tent unit mounted on a platform of interlocking pontoons. This offers slightly less room for Members but should only be with us for one year.

The Stewards are working with a firm of sports architects to design a suitable replacement for this iconic feature of the Royal Regatta. 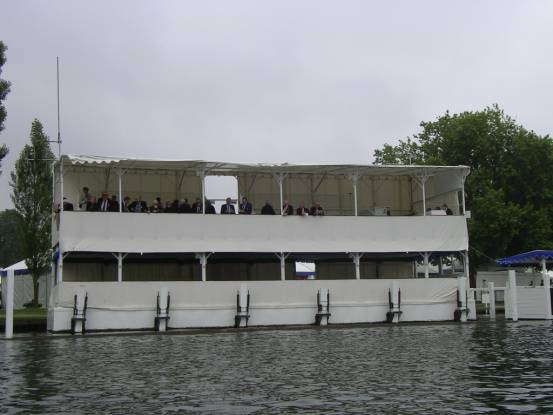 The temporary replacement used in 2009