Pre-war Eton [1937-] was a bit like Tom Brown's School Days. I was not academic. Eton had wet bobs and dry bobs, those who rowed on the river and those who played cricket. The river was grand. I enjoyed it hugely.

I finished by getting into the eight which rowed at Henley in a schools regatta in 1942 which we won. Being war time there was no official Henley regatta. Eton provided several of the boats. As no one had any petrol to take them by lorry, scratch crews rowed the boats up and came home by steam train.

After the race we were all hyped up after having won. We set off on the 25 mile journey downstream to Eton. If you have ever rowed a boat you must be able to remember the feeling when it is going well. The whole thing depends on absolute timing. Clonk-swish- pause-clonk-swish-pause. After 25 miles the boat sped. It was a beautiful moonlit evening.

We had our coach with us. He rode the whole way on a bumpy towpath on his bicycle. There were seven or eight locks for him to get his breath back. We stopped for dinner at Skindles Hotel in Maidenhead.

The final lap was two more locks and so home at about ten o’clock in the gloaming. I have never forgotten that evening and never will. The way to coach an eight is to take them on a twenty-ﬁve mile row but few people have the time today.


1945: 1st March, A boatrace between Oxford and Cambridge was held in Henley Reach. Cambridge won. Film 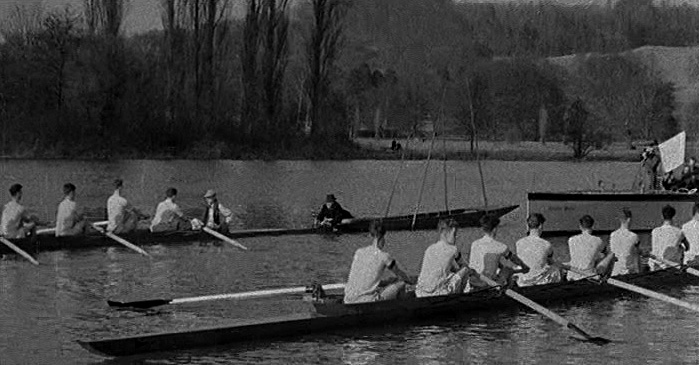 An American newspaper correspondent rang me up a few days before last week's Henley Royal Regatta. As two of his countrymen, A.A.Gallagher and J.B.Kelly[ see 1947 below ], had entered for the Diamond Sculls, he wanted to know something about the event.

"When did the first race take place?" he asked. "In 1844," I replied. This information was greeted with a long appreciative whistle. "And they've been competed for for every year since?" he queried. "With the exception of the gaps created by two world wars, they have."

He asked for a description of the trophy. I read him the contemporary account from Bell's Life. "The sculls are models of about six inches in length, formed of frosted and bright silver, the handles and fillet gold, the sculls crossed and corded gold, the cord appearing in the centre of a wreath of green enamel set with rubies and brilliants and tied with gold, the ends of the tie sustaining a brilliant drop."

This whetted his curiosity. "Can you give me an idea of their value?" he asked. Now frankly, beyond their being the most coveted prize of our rowing world, demanding of the winner qualities of skill, courage and quick decision, it had never occurred to me that they were worth anything at all. Just an unimportant piece of early Victorian fla-fla; that, I think, would describe the trophy, yet people come from the other side of the world in the hope of winning it.

The Diamonds, however, are not the oldest Henley event. For when the Regatta was instituted in 1839 with the aim "of producing the most beneficial reults to the town" and of being "a source of amusement and gratification to the neighbourhood and the public in general," it was agreed that a silver cup, value 100 guineas, to be called the Henley Grand Challenge Cup, be rowed for annually by amateur crews in eight-oared boats.

Yes, in those days they certainly had an idea of how to make a show of it. Those ancient crews undoubtedly and intentionally provided a rich, visual feast of colour and cohesion.

This may seem curious to us to-day, though it is not surprising when we realise that some time before our forefathers had appreciated the possibilities of racing in boats, they had come to the conclusion that a combination of oarsmen, boats and water offered unrivalled opportunities for gay gala and colourful spectatcle. Perhaps the most obvious illustration of this fact lies in the annual Procession of Boats at Eton on the fourth of June.

Since those days, oarsmen's attire has become increasingly "utility", although Henley regulations still require that an oarsman or sculler shall be clothed "from the knee to the elbow". This must seem pure Victorian prudery to competitors from other parts of the world who feel more at home in abbreviated trunks and scanty singlets. When rowing on Lake Ontario many years ago, I remember a local newspaper remarking on the modesty of our attire. Compared with our shorts and zephyrs they remarked that our Canadian pals "looked like debutantes at a Cuban ball."

If, however, the costume of the competitors has grown more prosaic with the passing of time, the fashions of the spectators shows no tendency in that direction. Henley is probably the only function where the brilliant plumage of the male vies with that of the female. And how glady does the male grasp the opportunity! Just think of what he can get away with at Henley! Headgear of exquisite glory - caps of every blue, panamas and boaters with the most fetching ribbons; blazers and coats of many colours; trousers with eccentric striping; not to mention the colour-clashing pandemonium he can attain with the aid of a few carefully-chosen socks, ties and scarves.

How much I enjoyed a recently published clerihew which ran:

Spats
Are very seldom seen with straw hats
Not even at a
Regatta.

However, qute apart from all the rather affectionate fun one can poke at Henley Regatta, it is most definitely a part of our English scene which establishes a wonderfully firm hold in the affections of competitors and spectators alike. Oarsmen from overseas, long after their active racing days are over, return time and again to this place of acquatic rivalry. Captains of ocean-going liners have been urged "to get a move on", because an old Blue, homeward-bound, counts his arrival at Henley on the first day of the Regatta as a matter of life and death. Without doubt, that one mile, five hundered and seventy yards of shimmering water, piled and boomed its entire length on either side and set in one of the loveliest and most lush valleys of our country, holds magic that is all its own. 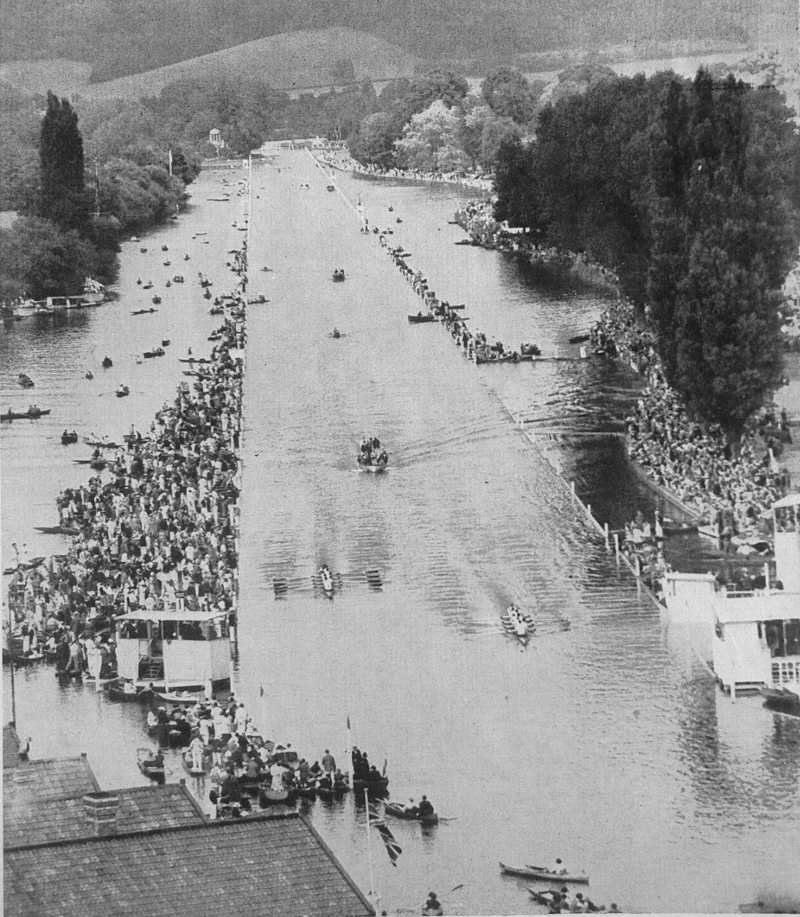 Our Royal Family has maintained in the event an interest which began in 1851, the year in which the Prince Consort became a patron and which has been exemplified this year by the support of Princess Elizabeth. 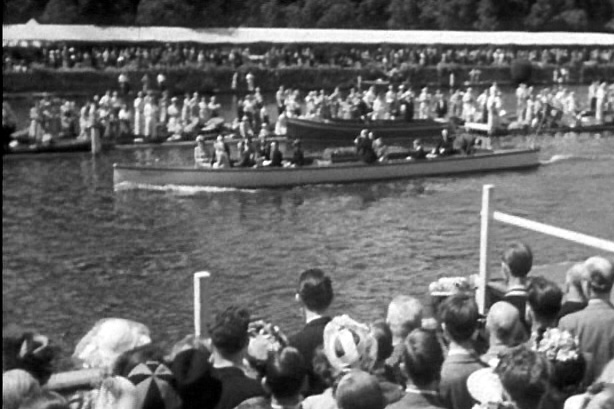 This year, excepting the Centenary Regatta of 1939, there was the greatest number of entries on record. This is remarkable when one considers how short a time clubs have had since the war in which to get going again; how hard to come by is suitable raw material for the making of oars and boats; and how cruel and crushing is the purchase-tax which the Chancellor still sees fit to impose on this very blameless sport. As someone wrote to me recently, "Can't he be made to realise that racing boats are not pleasure boats?"

Foreign entries, headed by the Swiss eight from Zurich, were encouragingly plentiful. There were entries for the pairs, the Double Sculls and the Diamonds from Latin America, while in this latter event competitors from the U.S.A., Australia, Norway and France took part.

That Henley is moving with the times was evident, not only from the introduction into the programme of two new events - the Princess Elizabeth cup, an eight-oared event open only to schools, and a Double sculls race - but from the installation of an elaborate system of local broadcasting, whereby the people in the enclosures heard through loudspeakers (sufficiently muted so as not to imperil the amenities) the progress of the races, broadcast from three selected sites on the bank. 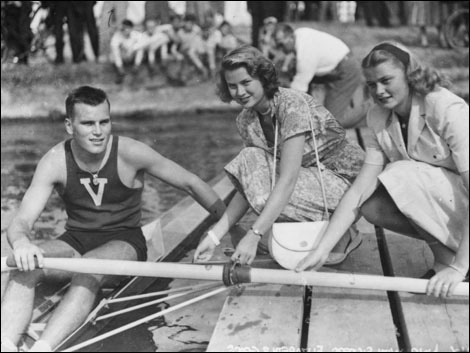 The future Princess Grace of Monaco, with her brother, John B. Kelly, who won the Diamonds

The future Princess Grace of Monaco, actress Grace Kelly in 1947, with her brother, John B. Kelly, Junior. who won the Diamonds Sculls in 1947 and in 1949. Princess Grace was the Regatta prizegiver in 1981.
John B Kelly's father was a great sculler and Olympic triple medallist who was not allowed to compete in the Diamonds in 1920 because he had done a little bricklaying (and was therefore deemed a tradesman not an amateur) and he was also a member of the Vesper club which in 1905 had been refused entry because they raised money for their trip from USA by public subscription( and therefore deemed professional). 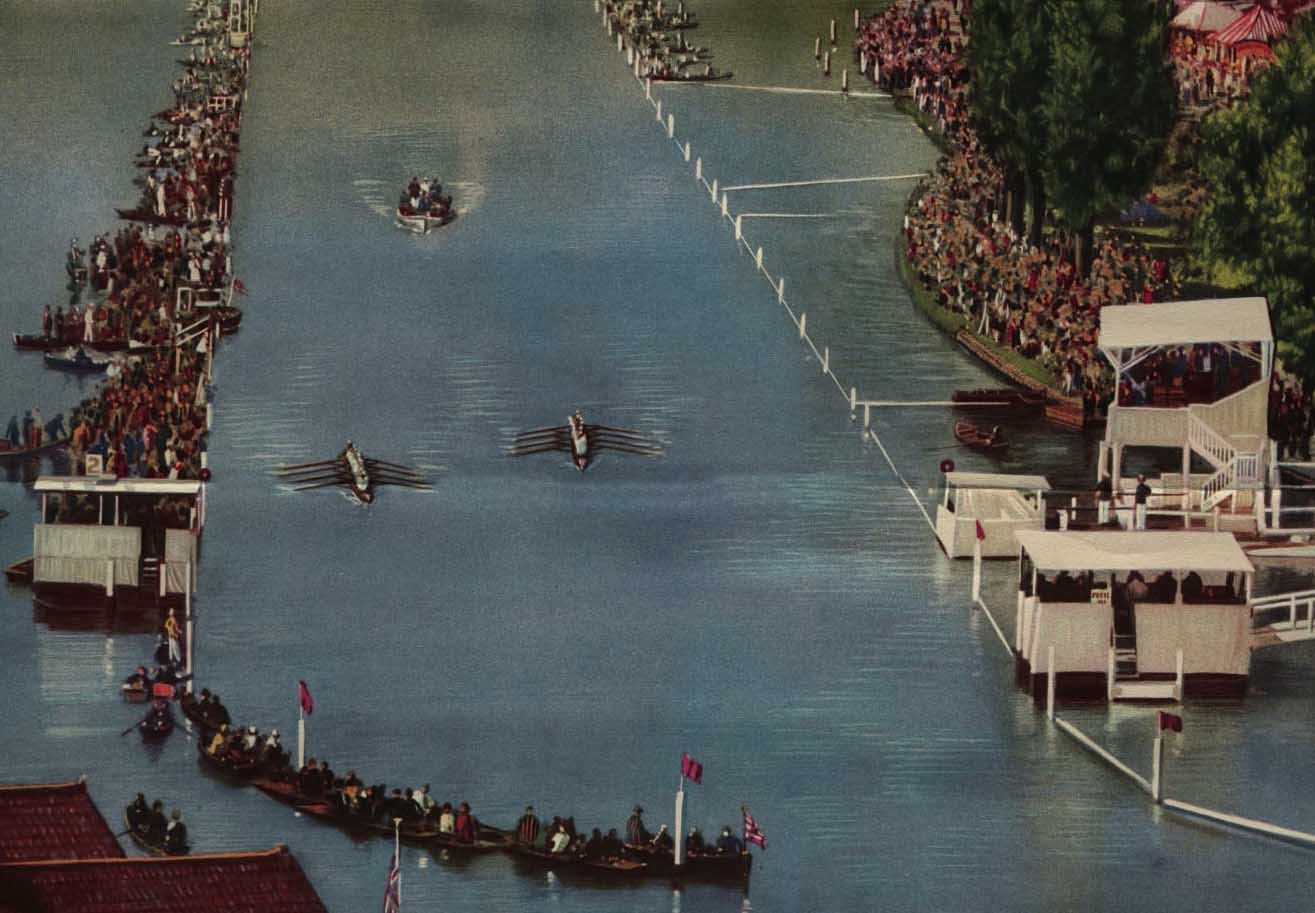 [ The curve of spectators boats above the finish must have given some fantastic views - however from a cox's point of view it was not a good idea - see how the Bucks crew are already turning to avoid them whilst still racing. ]