Many years have elapsed since the Henley Regatta produced such a large entry list or so much good sport as this season, and the frequenters of the Oxfordshire gathering had no reason to complain, either of the programme set before them each day, or of the performances of the competitors themselves. The rowing was excellent, some of the races being unusually well contested; and the form of the oarsmen, although perhaps not of the scullers, was quite up to the average: these latter showed a considerable falling off ...

Baily's Magazine of Sports and pastimes, 1870 -

Henley Regatta was this year up to the average in all respects unless we except weather, which on the second day was simply infernal, the rain pouring down just as we all wanted to see the final heat of the Grand Challenge. We prefer comfort to elegance, and have no sympathy to waste on those who don excessive war paint, and then get caught in a storm, in fact the spectacle is rather enjoyable than otherwise; but it was hard on ladies, who have a prescriptive right to appear on such occasions en grande tenue, that the Grand Stand, which would naturally be considered a harbour of refuge from the elements, was not watertight, in fact, very much the reverse.

The Grand Challenge entries were very good. The holders were perhaps not as well together as last year, but just as strong, as their opponents found to their cost; in fact, they were better than they looked. Kingston, on the other hand, looked better than they were, and from being a rough, strong lot a week before the regatta, had become the neatest crew of all. London were big and strong, but though a faster crew than Kingston, they were scarcely so taking in appearance. The Pitt Club, with several Cambridge blues, and Goldie for stroke, were fast, but not particularly well together. For pace over the course they were as near as possible the counterpart of Kingston, as in the trial heat they were dead level close to the corner, where the station of course gave Kingston the race. The Eton boys showed great pace in their heat with London, but had no chance against the steadier rowing of their seniors, who, as on many former occasions, achieved the barren honour of being the second-best crew there. Of the Dublin men we can scarcely say too much, for ten days before the regatta, only two out of the eight had ever sat in a proper racing boat; yet so well had they been worked in tubs, that on the day they made a very respectable appearance, the credit of which is mainly due to Tom Grant, who coached and trained them, and certainly managed to inoculate them with a very workmanlike style. The result of the heats showed that the holders were again the best crew, and London next, Kingston, Pitt, and Eton very close together.

In the Ladies' Plate the Dublin men disposed of Radley, but fell to Eton in the final, in which they showed a lack of judgment by starting at a tremendous pace, so as even to cut down Eton, who are themselves remarkable for getting away quickly. The Irishmen took a strong lead, but were unable to hold it, and Eton, reversing the traditional order of things, outrowed them, coming in very easily at the finish. As Dublin had the best station, they would have done better by just keeping on terms with their men so as to prevent their water being taken, and if they could hold them to the point, the station would have almost given them the race.

The Thames Cup again went to the Oscillators, who, however, lost the Wyfold, which the Thames Rowing Club won pretty easily.

The Stewards' Cup brought together some clinking fours. The Oxford Etonians, London, Kingston, Radleians, and Lancaster all showed great pace, and we reckon the first three nearly level, as the Etonians had the station each time, which is quite enough to account for the distance they won by. For the same reason we fancy the Radleians better than Lancaster, who station and all, won their heat by less than two feet.

The Visitors' Plate was the great surprise of the meeting, as University College, Oxford, were beaten by the Dublin men. The losers had two races in them, and the Irishmen but one; this, however, was not sufficient to account for the defeat of four tried men, and much credit is due to the Dubliners for the achievement.

In the pairs Ryan and Gulston came to grief through fouling, and Corrie and Hall won easily, though it was questionable whether the discretion of the umpire should not have been exercised, and the race rowed again, as at the time of the foul the three boats were pretty level. As it was, the Kingston men made short work of the final, and, having been allowed to row over at two or three regattas since, may fairly be reckoned the best pair out this season.

The Sculls, which last year produced so magnificent a race between Crofts and Long, was again a regular turn-up. The issue was generally expected to lie between Yarborough and Long; but the former, while going well in his heat, ran against a pleasure barge, and Long was disqualified for fouling. Close, who was probably next fancied, proved the winner. We trust, however, next year to see more watermanship among Henley competitors, who should be the best men of the day, and able to keep their boats pretty straight. 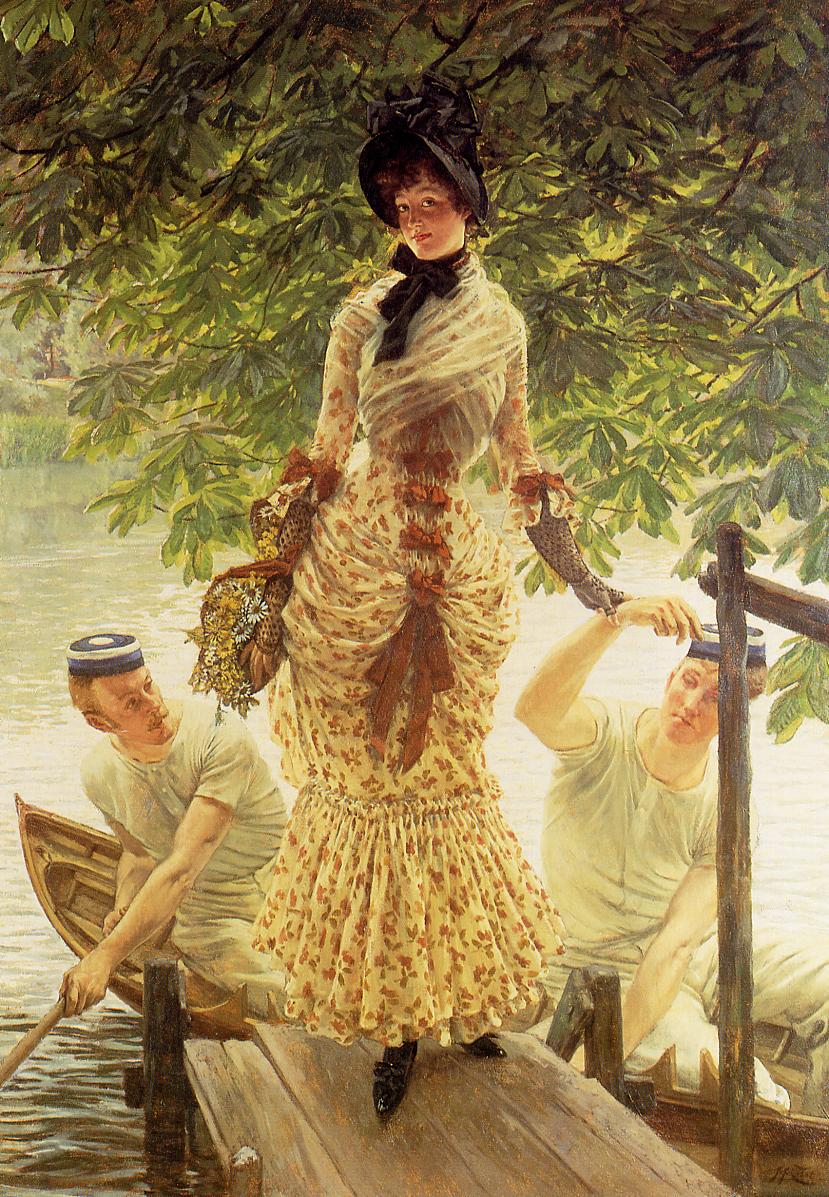 [ The thoughts of each of the three above are quite clear and not to be repeated! ]

Before 1886 there were often three competitors in each race. Here is a pre-1886 start - 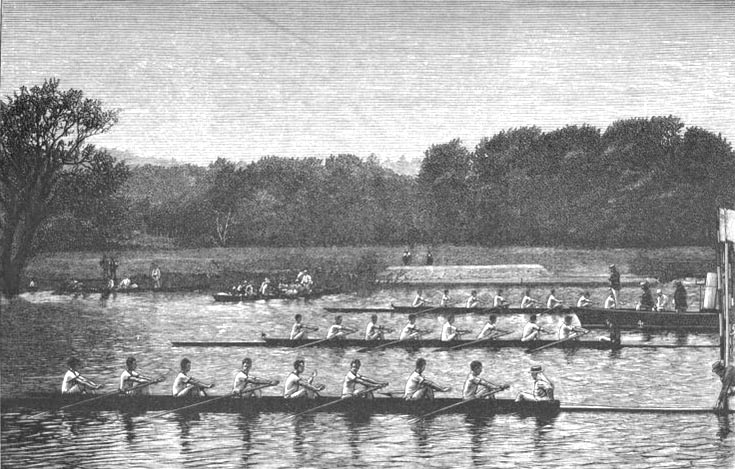 The final was between Thames, Jesus College Cambridge and a combined Brasenose and University College crew, rowing as Oxford University:
In that race, Hastie went off in a way that, I think, fairly paralysed the other strokes for the moment. What the rate was I do not know, but we took it up magically (of course by pure accident) and I never in my life, before or since, felt a boat jump under me like it.

We cleared the 'Mixture' in less than two hundred yards, crossed them, and after a sharp tussle, got the Jesus water... Then Cabby [Rhodes, the Jesus stroke] came at us with a rush. The yells of the Cantabs to 'bump' us, I shall never forget. Hastie jerked his head towards Bucks, and Safford, losing his nerve, lugged his right string so hard that he ran us across Oxford again, and nearly fouled the bushes just above the Fawley Court boathouse.

When we got straight, we buckled to, and came across gradually, got their water again a little before the corner, and won (easing down a bit, but mortal licked at the finish) by nearly two lengths...'

At this Henley there were entries from two American scullers. They were both named Lee. One being G. W. Lee of the Triton Boat Club, New York ; the other being G. Lee of the Union Boat Club, Boston. G. Lee was an amateur in the strictest sense of the word, but his rowing skill was not equal to the purity of his status, and he was soon disposed of. It may be doubted whether, even at this time, G. W. Lee could have substantiated his claim to rank as an amateur. Later on he openly joined the professionals and sculled for money. He was a formidable and skilful sculler.

England's hope on this occasion was T C Edwards-Moss, of Brasenose College, Oxford. He had rowed four times for his University, once (in 1876) as stroke, and three times as No. 7. In the previous year he had won the Diamond Sculls. His sculling had all the best points of his rowing - perfect watermanship, beautiful precision, and great power, but he had not devoted any great amount of time to it, and, compared with Lee, he was short of practice.

These two, then, came together in the final heat, Lee with the Berkshire station, Edwards-Moss with the centre. Lee at once began to lead, but he could not shake off his enemy. Still, he held his advantage to the Point, and as he showed no signs of exhaustion the race appeared to be over.

Rounding the comer, and with the station in his favour, he was a length ahead of Edwards-Moss. From here, however, the latter began one of the most marvellous spurts ever seen in a sculling race at Henley. Faster and faster he dug in his sculls, and faster and faster moved his boat in answer to his efforts.

So the two boats neared the finish, Edwards-Moss overhauling his rival at every stroke. Lee, however, still had his canvas in front. All he had to do was to put in half a dozen hard ones to make sure of his victory.

He was incapable of this effort. Dismayed by the rapid approach of his rivals he faltered and looked round. His boat lurched and he stopped sculling. In a flash Edwards-Moss was up to him and past him, and had won the race.