Moor around here on the left bank for The Trout Inn. Walk over bridge.

This section in The Stripling Thames by Fred Thacker
1645: The previous Godstow bridge was held by the Royalists against the Roundheads.
1692: Baskervile:

Between Witam & Woolvercot is a stone bridge.  yt has two Arches through which laden boats do pass, & here by ye help of foards & other bridges both horse and foot do pass into each County viz.  Barks & Oxfordshire.

1780:  Dredge says - the bridge over the lock cut was built?
1790:  Sketch by Ireland showing one blocked arch and one open for navigation.
1792:  The current bridge was built when the river was being prepared for the canal traffic.  It is everything a Thames Bridge should be - old, narrow, even perverse, and utterly delightful.

'And above Godstow Bridge, when hay-time's here
In June, and many a scythe in sunshine flames,
Men who through those wide fields of breezy grass,
Where black-winged swallows haunt the glittering Thames,
To bathe in the abandoned lasher pass,
Have often passed thee near,
Sitting upon the river bank o'ergrown:
Marked thy outlandish garb, thy figure spare,
Thy dark vague eyes, and soft abstracted air;
But, when they came from bathing, thou wert gone.'

[Not quite sure about "the abandoned lasher": it could be at what we now know as King's Lock - or possibly Clay Weir above King's, or maybe it was at what was then Medley Weir] 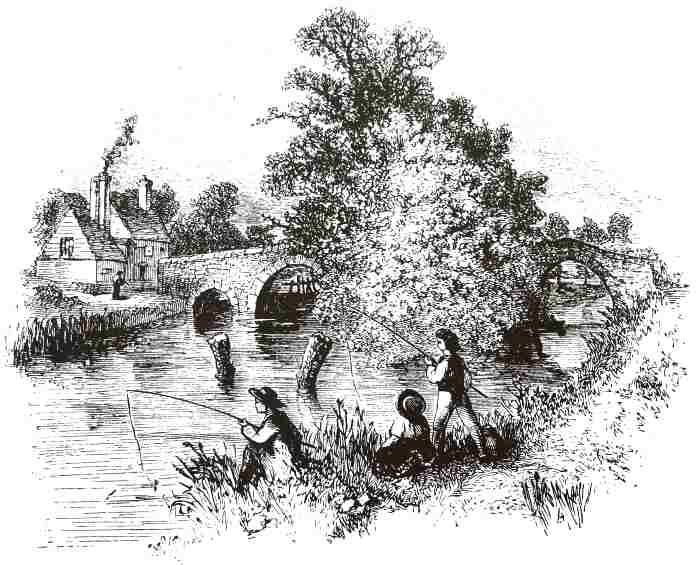 Godstow Bridge is highly picturesque; the river divides here, and at the brink of the older and more shallow channel is a pleasant inn — "The Trout", well known to anglers, but better to the "Oxford scholar", as a place accessible to the rower, who here seeks refreshment after toil, and finds the homeward voyage with the current an agreeable and easy evening task. 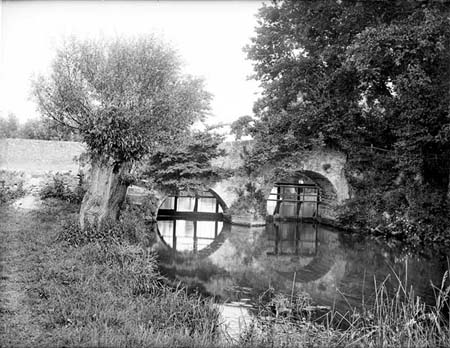 Of the upper part of the Thames at Oxford, Godstow is the farthest boundary ...
The ancient bridge, beneath which rushes down the clear stream, as yet unharmed by the pollutions of towns; the eddying pool, and in effective contrast, the calm channel of the lock; the old inn, with its trim water-side alleys; Port Meadow with its broad green expanse and grazing cattle, rich demesne of Oxford burgesses; and, rising in the near distance, the wooded slope of Wytham - these make such a picture of river beauty of the quieter sort as may not easily be surpassed.
Fair as it is at all times, except perhaps when the floods have changed all the green of the landscape into a turbid yellow, the visitor should come by reference at the beginning of July, when the summer is at its highest - the undergraduate, if I may be allowed to say so, not too frequent - and the strawberries of Wytham ripe.
When he has paid due respect to these, let him visit the one sight of Godstow - the nunnery ruins; though they are interesting more for what they recall than for what they have to show. Walls built too strongly or too roughly to tempt the cupidity of house-builders and church-restorers; a ruined roofless building, once St leonard's Chapel and the private oratory of the nuns; and perhaps the most interesting of all, or or two curious plants, once cultivated by the nuns in their garden, and now the only living survivors of a long-vanished past, are all that remain to be seen. 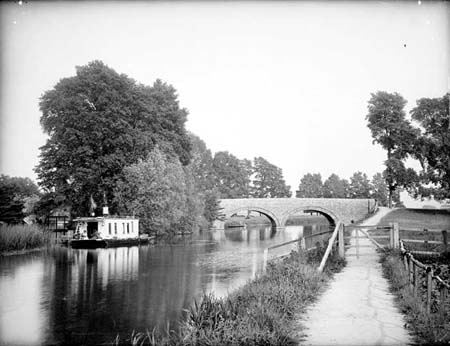 Godstow Bridge lies just above the ruins of the nunnery, spanning the navigation with two new brick arches, and the Trout backwater with two smaller arches of stone, the further of which is pointed and looks most ancient of all. Backwards through the bridge you get as in a frame a miniature of Christchurch spire.

Godstow Bridge carries local traffic between Wytham and Wolvercot, but under the Oxford Town Planning Scheme it will have the important function of being a link in the circumferential road by-passing Oxford on the west side of the city.
Godstow Bridge is described in the Baskervile MS. of 1692, but it had probably been in existence some time previous. It consists of two stone arches (the eastern one pointed and possibly of earlier date). The weir is under the bridge. The stone bridge over the lock cut, originally built in 1792, was rebuilt quite recently by the Thames Conservancy with two elliptical arches.
It is to be hoped that the new bridge, should one be constructed, capable of carrying an increased traffic load, will be congruous as to scale and material with the charming old seventeenth-century inn by the weir.

[ The above is what is known as a pious hope! See Thames Bridge to judge how far it was realised! ] 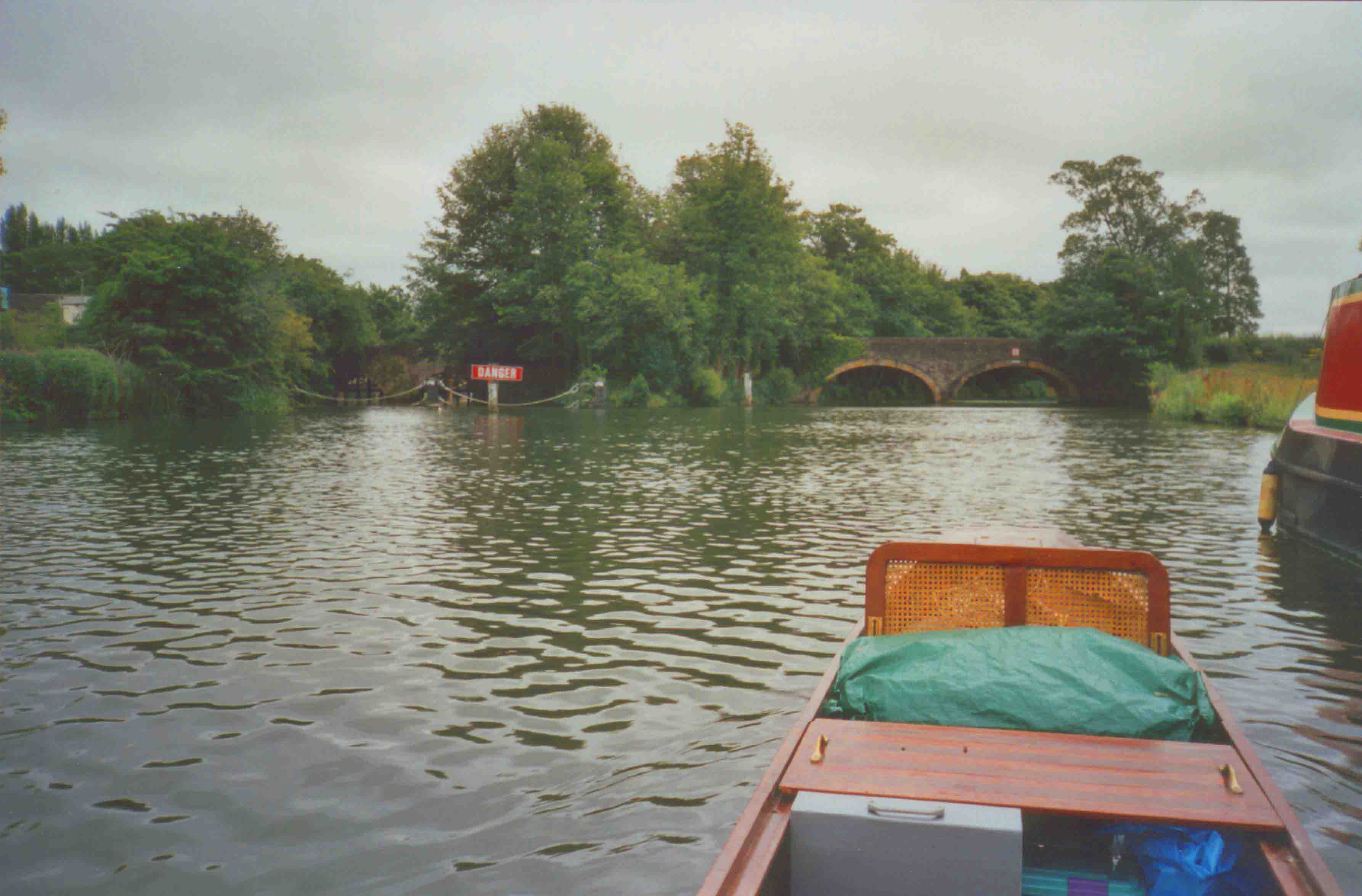 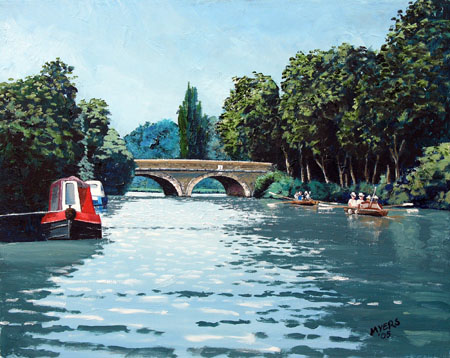 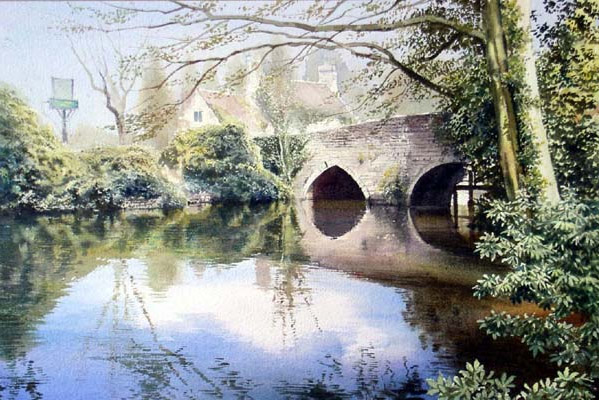