King's Weir in The Stripling Thames by Fred Thacker
[ In 1909 the pound lock was still 19 years in the future. ]

Duke's Cut to the Oxford Canal

Duke's Cut is reached above the lock via the Right bank mill stream going north west from above the weir at King's Lock. The actual cut which goes under the by-pass is then a turn to the north east on this weir stream. See Oxford Canal for the route from Oxford via the Canal.

The Junction of Duke's Cut and the Oxford Canal 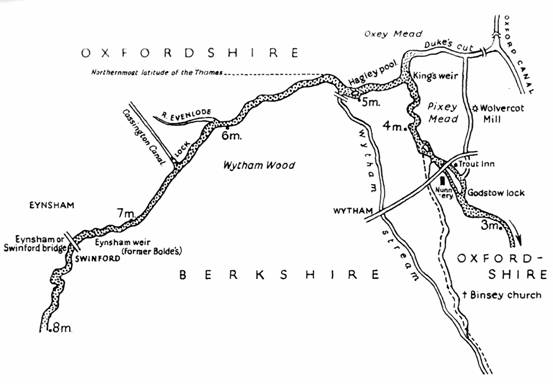 On 14th June water rose to high water mark.  Hart, the keeper of the weir, was called upon to draw up the sluices and let off the water, which he did not do, and thereby made the owner of the mill, his employer, liable to a penalty of £10.
Proceedings taken against him by Williams of Wolvercote.
Hart said Williams had come down to the weir and pelted him with stones;  that he suspected what he had come for and could swear that the water was only up to the crease and not above it.
Fine proved.  £5 given to the Navigation Company & Mr. Williams means to give £5 to the parish of Wolvercote.
Mr. Williams observed respecting the alleged throwing of stones that he had recourse to this mode of getting Hart to come out of his house to him, because he could not make him hear or at least make him attend to him by calling over the water.  Hart saw him but would not pay any attention, and it was not till he saw him retire to his basket-work in the house that he tried this way of making him attend to his call.

1817:  It was decided to construct a new pound lock as soon as funds were available.
1842:  Weir closed for repairs The miller tried to raise the weir 8 inches (to give more head of water for his wheel).
1845: Extra power is generally required to get boats up the weir.
1850:  Wood's Oarsman's Guide: When the sluice is up the gate flies over.
1861:  Ravenstein: open with a lever obtained at the adjoining cottage.
1872:  Ravenstein: boatslide lately put up.
1873:  University Paper Mills offered to share the expense of a modern lock, the Conservancy declined the offer.
1885: The Royal River -

King's Weir ... serves as much the purpose of a lock as a weir, its gates opening when necessary to admit the passage of larger craft than those which can be conveyed over the rollers supplied for pleasure-boats.
The river from the pool for some distance is almost choked with weeds, very narrow, and of hardly sufficient depth at low water to admit the passage of an ordinary pleasure-boat.

1893:  Ravenstein The Oarsman's and Angler's map:
King's Weir:  Falls 2ft 6in. A difficult weir to manage.  An inclined plane with rollers for light boats. 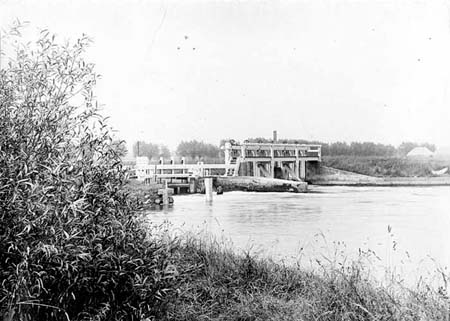 1928:  Modern Pound Lock finally constructed (111 years after it was first decided upon!) 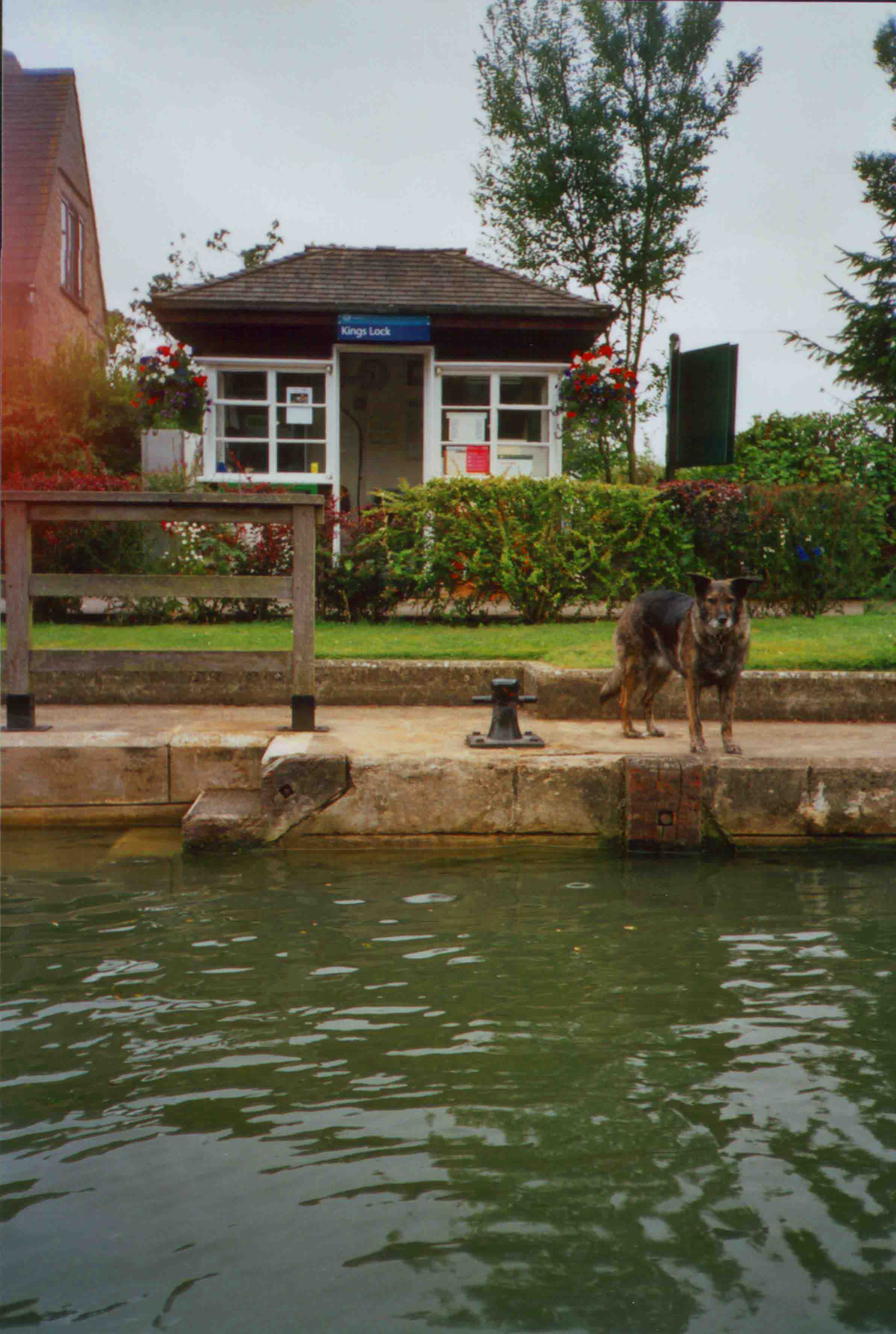 The lock office has been extended with an experimental building.
Designed to test carbon saving construction techniques it has car tyre foundations and straw bale walls. We intend to use some or all of these techniques and materials elsewhere on the Thames once we have evaluated the success of this project.
The building has been funded by the Environment Agency's Carbon Reduction Fund to offset some of the carbon we produce when carrying out our functions.

Above Kings Lock there is a Right bank (right as you go upstream) turning onto the Duke's Cut to the Oxford Canal.  This is the normal route for canal traffic rather than taking the turning at Four Rivers.
1920:  Fred Thatcher:

The lock connecting the River with the Oxford canal is interesting, being so constructed as to give a fall either way, according to whichever navigation has for the time being the higher level.

The picture from here is exceptionally interesting. A rustic bridge spans a backwater trending towards Witham Mill, and in the direction of Oxford. The thickset woods stand out in prominent relief, and another farmhouse of the higher class, surrounded by ricks, appears to the left.
Hagley Pool, which is merely a lake-like widening of the water at the bend, is covered with yellow water-lilies.

Weir Stream leaving on Left Bank.
The Seacourt Stream is probably an old course of the river which entirely by-passes Oxford, going through Hinksey and rejoining below Iffley Lock.  I think most of this can be canoed.
1610: Camden -

Isis, having now entertained Evenlode, divideth his chanell, and severing it selfe, maketh many and those most delectable Islands.

1794: Oxford from near King's Weir, Boydell's History of the Thames - 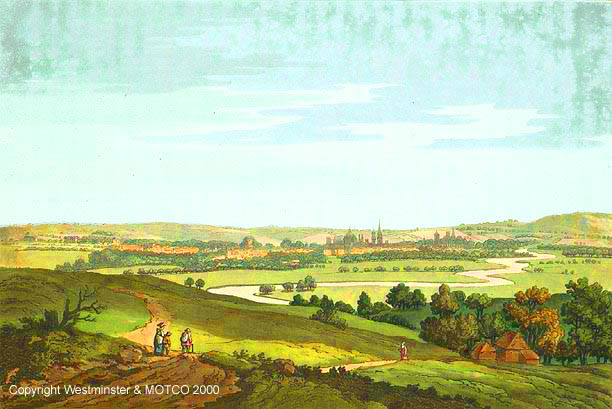 1796:  Charged 1s. per boat for shutting
(i.e. it was normally open, but when the depth above it was insufficient it could be shut to give more water above it).

On the Right bank of the river a building has been recently erected, which may be accepted as evidence of the progress of the age, in the midst of so much that is evidence of hoar antiquitie;

It is the new PAPER-MILL of the University.
All makers of books are well aware that of late years the manufacture of paper has not been what it was a century since, or, rather, three centuries ago;  while the leaves of our great-great-grandfathers are as fresh and fair as on the day they issued from press, modern books, and illustrated books especially, are often full of unsightly and diseased marks, that mar the beauty of the volumes.  The University, having experienced this evil, resolved to make its own paper; it is a boon which claims public gratitude.  The manufactory has a picturesque character seen from the Thames not the less valuable because of the purposes to which it is dedicated.

It is unfortunate, but true, that [coming downstream] the first glimpse we get of the spires of Oxford are in conjunction with the tall red-brick chimney and not elegant University paper mills.