The next land is Osney, an oval island very little less than a mile long, and about a third of a mile wide at its broadest part, containing both the railway stations of Oxford.
The second bridge is that of the Great Western Railway, which running north cuts Osney lengthwise into two unequal parts. 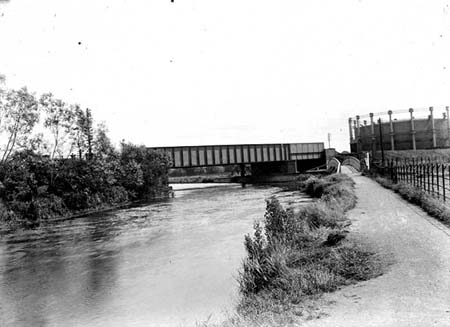 Above this point through to Medley Bridge above Osney Lock we are on what is probably an artificial cut made by the Monks of Osney; and if at times it feels like a back door to Oxford that might be because that is precisely what it is. It was the trade entrance and the front door was the old stream to Castle Mills.

LEFT Bank:Bullstake Stream (or Pot Stream)
Boney's Bridge, towpath bridge over Bullstake Stream
Actually there is some debate as to which is Boney's Bridge:
Unless someone can show me otherwise I shall continue to think that this towpath bridge was originally called Boney's - before the railway came.
(The name may refer to Napoleon Buonaparte).
My guess (and it is only a guess) is that this towpath bridge collapsed in around 1809, just when news of Bonaparte's defeat due to a collapsed bridge was the news of the moment. Local humour then began to call the footbridge "Boney's" -
ENGLISH CARICATURE AND SATIRE ON NAPOLEON I, Chapter XLVII by John Ashton -

... One incident in this campaign was seized upon by the caricaturist. There had been much fighting about Aspern and Essling, with pretty equal fortune, until the destruction of a bridge, caused by a sudden rise of the Danube, which brought down timber rafts, barges, &c., deprived Napoleon of all the advantage he had gained, and compelled him to retreat to the island of Lobau.
There is a caricature by Rowlandson (June 12, 1809) of 'Boney's Broken Bridge'. An aged general, cocked-hat in hand, is thus addressing Napoleon:
'With all due deference to your little Majesty - It was the Austrian Fire-boats that destroyed the Bridge.'
Napoleon, however, turns on him savagely, and, pointing to the broken bridge, says,
'Ah! who is it that dares contradict me, I say it was some floating timber, and the high swell of the river that caused the Shocking Accident.'
The Austrian army, on the opposite bank, are singing a version of 'London bridge is broken down' 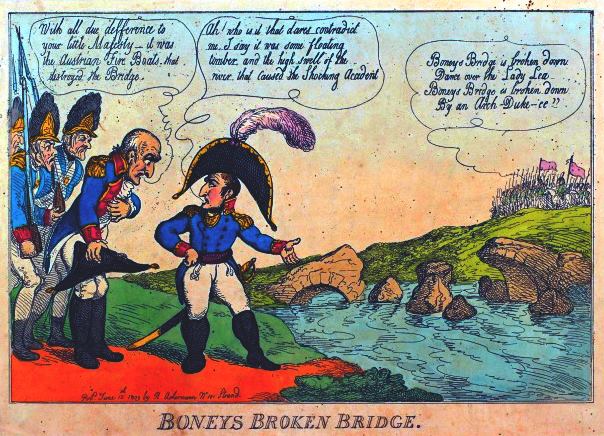 These "fords" probably included a crossing where the footbridge now stands. So there is evidence at least that the towpath bridge was rebuilt at the right moment to corroborate the above guess.
Fred Thacker also says that "the bridge over the Pot Stream was rebuilt in 1850". This would have been to facilitate the building of the railway bridge in that year. Somehow it seems the railway bridge then took over the name Boney's Bridge at least for a few years at the end of the nineteenth century.
But the name 'Boney's Bridge' was certainly applied to the Bridge over the Bullstake Stream:
Early Recollections of Oxford by Stephen Quelch, 1900 -

I occasionally take a walk from the New road to Folly Bridge, and about half-way round is Boney's Bridge, crossing the stream that leads to Ferry Hincksey

Also A register of the presidents, fellows, demies, instructors in grammar ... Page 381 -

They had arrived at the iron-bridge in course of construction for the railway over the Isis, close by Boney's bridge, when they heard a cry from Prentice, one of the party, who had preceded them down the river in a skiff, and they found that, in taking the arch, his skiff had got entangled with the piles of the bridge 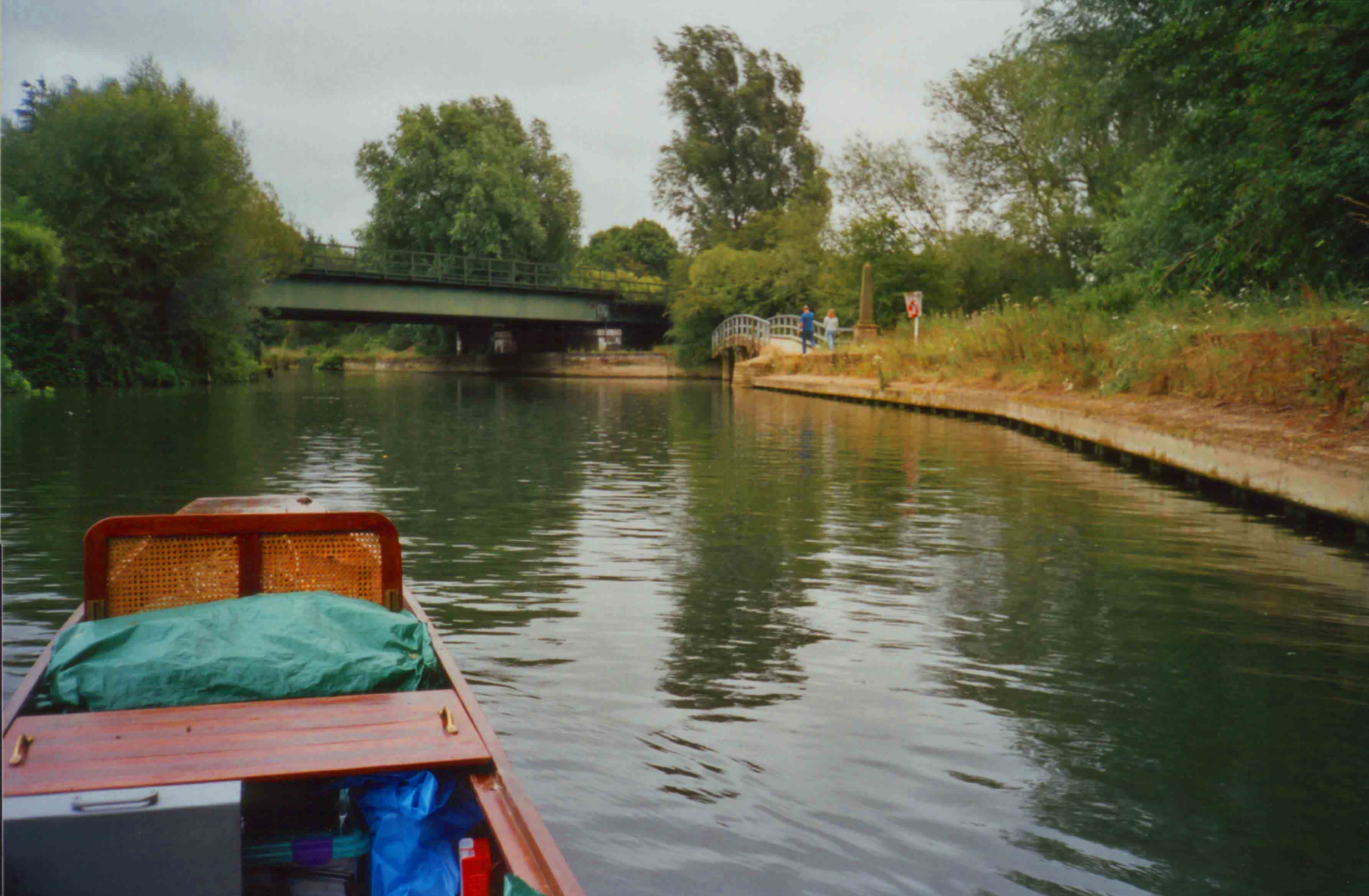 The Obelisk (visible in the photo above between the pedestrians on the footbridge and the life ring) on the riverbank by Boney's Bridge near Osney Railway Bridge, commemorates the bravery of 21 year old Edgar Wilson. Edgar, an assistant at Luffs the Chemist on Cornmarket, was returning from lunch at his home on Abbey Road, when he came across two boys, who, while fishing, had fallen into the river. Although a poor swimmer, he jumped in and saved them. He was immediately in difficulties himself. Two young men in a boat tried to reach him, to no avail. When Edgar's body was recovered, it was found that a fishing line, presumably that of one of the boys, had wrapped several times around his right wrist and his arm was pinned to his trousers by the fish hook. Already exhausted, he had gone under with this extra handicap.
The obelisk has a website of its own.
The Inquest report has the strongest evidence for the railway bridge being called Boney's at that time -

On Wednesday afternoon last a most deplorable fatality happened on the River Isis at Boney's Bridge, about mid way between Osney and Folly Bridge ... shortly after two o'clock Mr. Edgar George Wilson, ... chose the waterside via Osney to St. Aldate's as his walk. When near the foot-bridge which spans Hincksey Stream, at its junction with the main river near Boney's Bridge, he saw two boys ... in the water, and perceiving their imminent danger, he at once plunged in without removing any of his clothing, and after some difficulty succeeded in rescuing them. He then must have been exhausted, or have fainted, for he was seen to sink by two young men who were close by in a boat, and was apparently unable to save himself ... 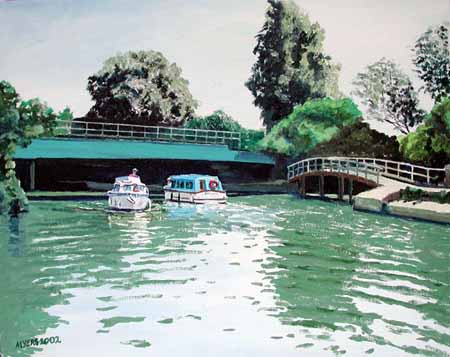