A punting / canoing trip in Oxford, from Folly Bridge, up the main river, and then left just above Osney Railway Bridges towards Hinksey. The challenge is - can you get to the Fishes? Take a saw! About the same distance as to the boat rollers up the Cherwell.
Countryside within the boundaries of Oxford. Kingfishers and meadowland.  Pylons and the noise of traffic but no boats at all. 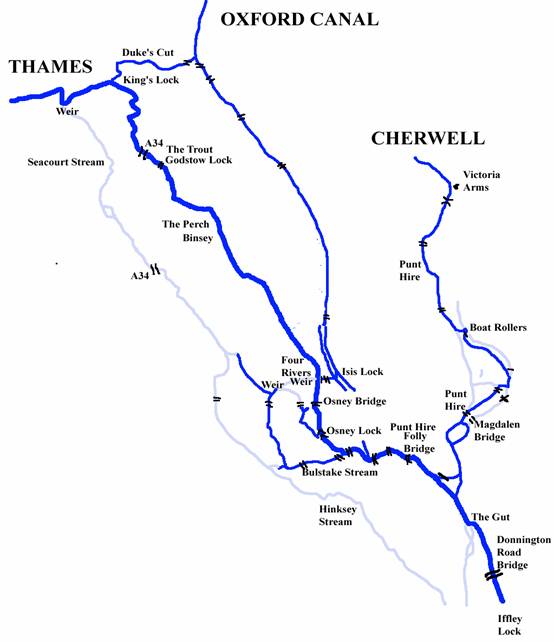 We all repaired to Magdalen Bridge and took Jenkin's canoe;  we went up the Thames, past Folly Bridge and the gas works, into a narrow stream, and finally to Ferry Hinksey.
Here we had a good tea (halfpenny a head) in the garden of the pub, which runs down to the water - nothing said all afternoon that's worth recording, but a very pleasant and cheery time.  Cool on the water and the river full of beauty - natural and human.

[ "Bullstake" is also elsewhere spelt "Bulstake" - I just had to pick one version  and decided for the one that made most sense.
I have also heard it known as Pott's Stream. ]

For Folly Bridge to Osney Railway Bridges see those sections. 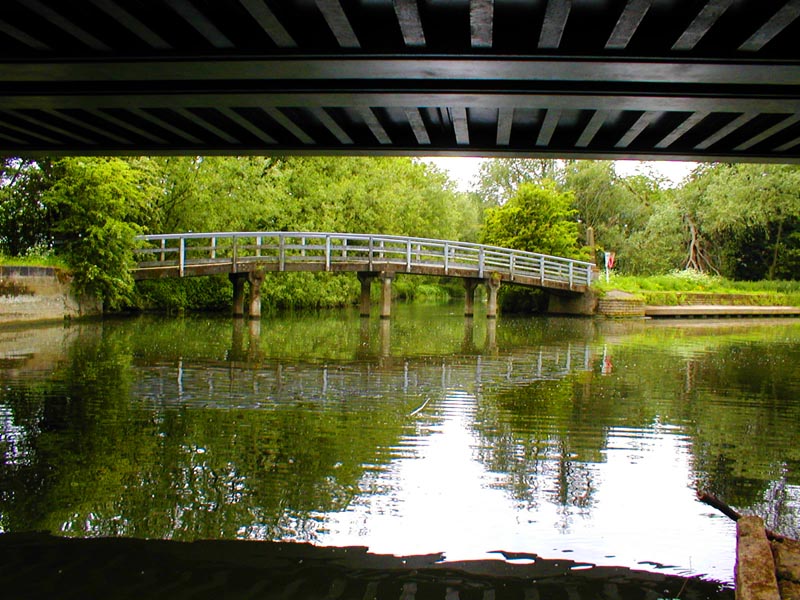 Unpowered boats only - enter the Bullstake Stream under Boney's Bridge, the footbridge straight ahead in above picture.

On the right are the modern, not unattractive, buildings of an industrial estate,
on the left countryside, meadows and woodland.

The current is probably slightly higher than on the main channel and you are going upstream. The water is coming from the Seacourt Stream which leaves the main river above Kings Lock and flows through Wytham and then becomes the Hinksey Stream. It is said that in flood conditions the current can reverse in the Bullstake Stream.

And then we loose the industrial estate and come into meadowland. 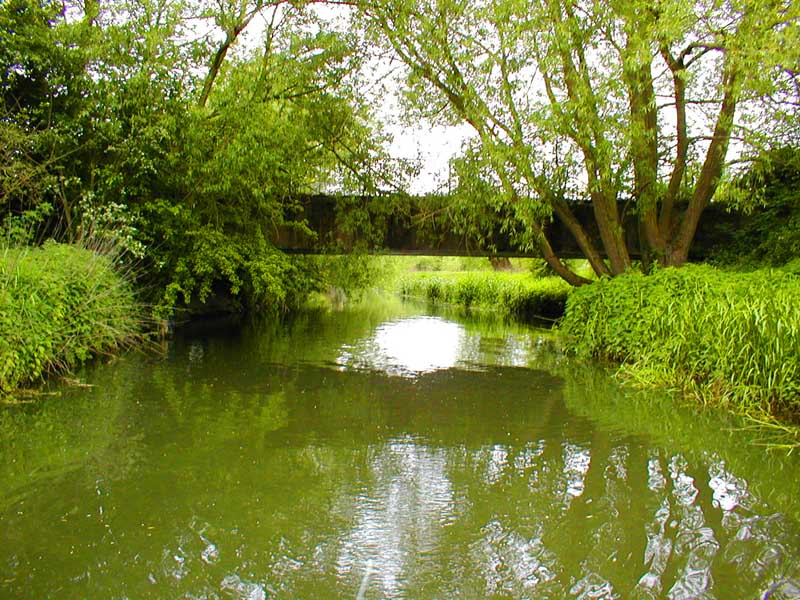 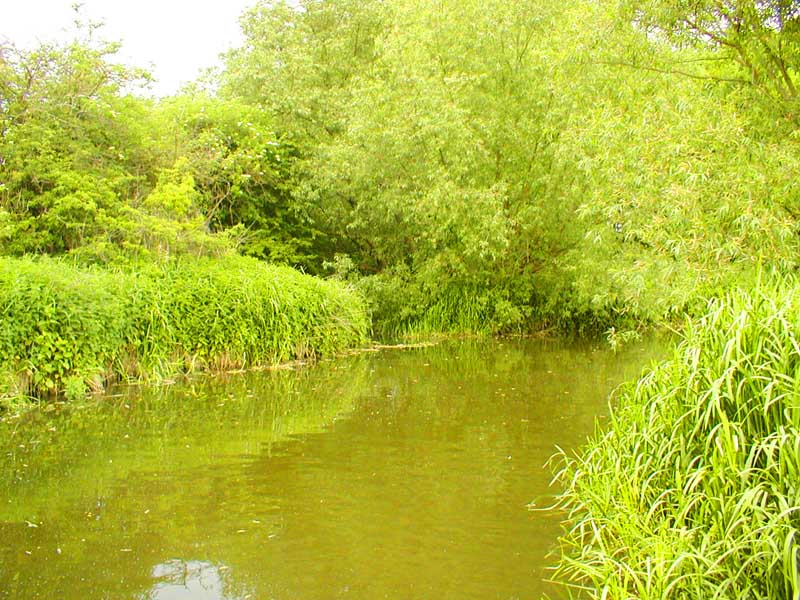 2000: Bullstake Streams junction (hidden)
In 2015 it is now more open and possible to get to the Fishes, Hinksey

At a right hand bend there is a tiny overgrown way straight on which  leads eventually into the main part of the Hinksey Stream, near the Fishes with a church and bridge to the left.  The village is North Hinksey Village.  The way through really is there in the middle of the above photo.
In 2015 it was a bit more obvious and some clearing work must have been done. I went through - it's a bit of a sort of "African Queen" exercise, dodging and ducking and pushing - but it can be done! You reach a junction: Straight on is the main Hinksey Stream downstream, (miniature rapids just around the corner); to your right is the main Hinksey Stream upstream. Most of the current is going down the Bullstake Stream. Go right and in a few yards the Fishes is on your left. Moor before the footbridge. Above the footbridge was too shallow to go further up there.

Back on the main Bullstake Stream, we proceed round the bend to the right - 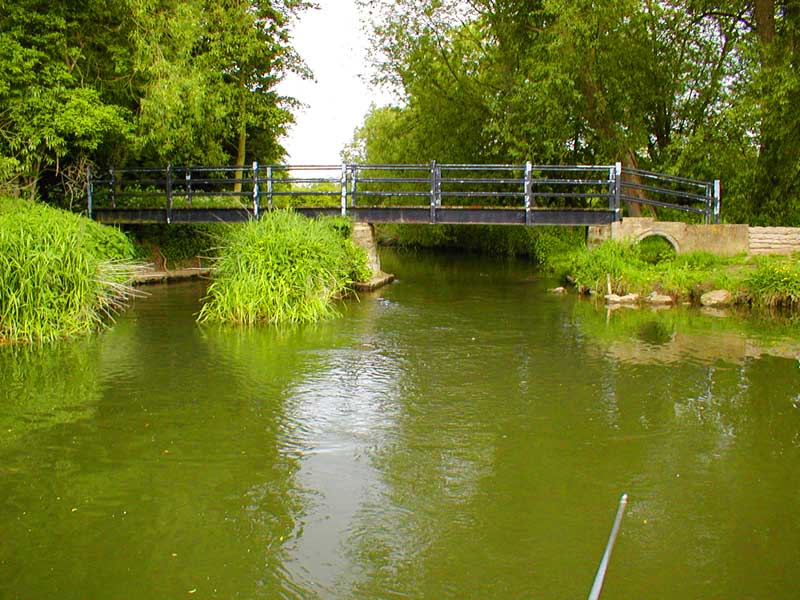 Children's Playground to the right.

And then we enter between houses into New Botley. 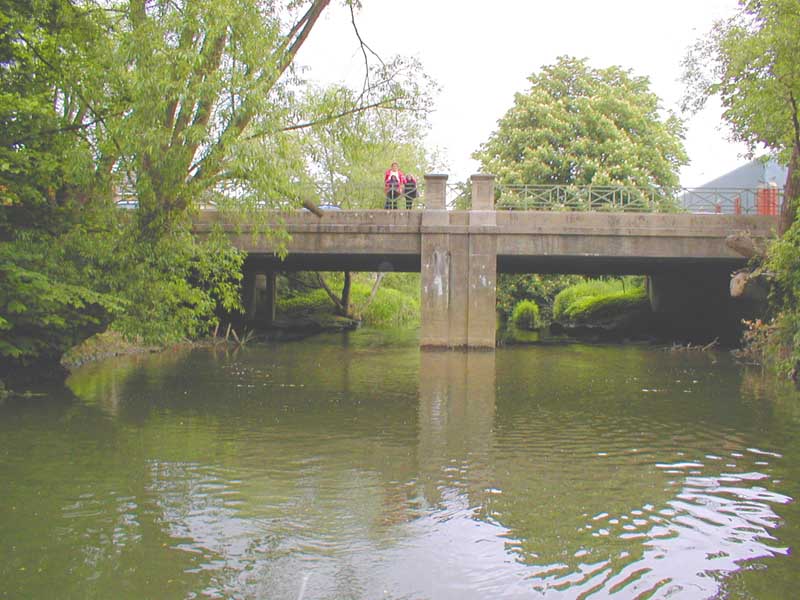 The A420 bridge has two arches: the right hand arch was blocked by debris; and the left hand arch swift and shallow. My punt grounded once or twice.
I think this is the A420 in New Botley, previously known as Seven Bridges Road. 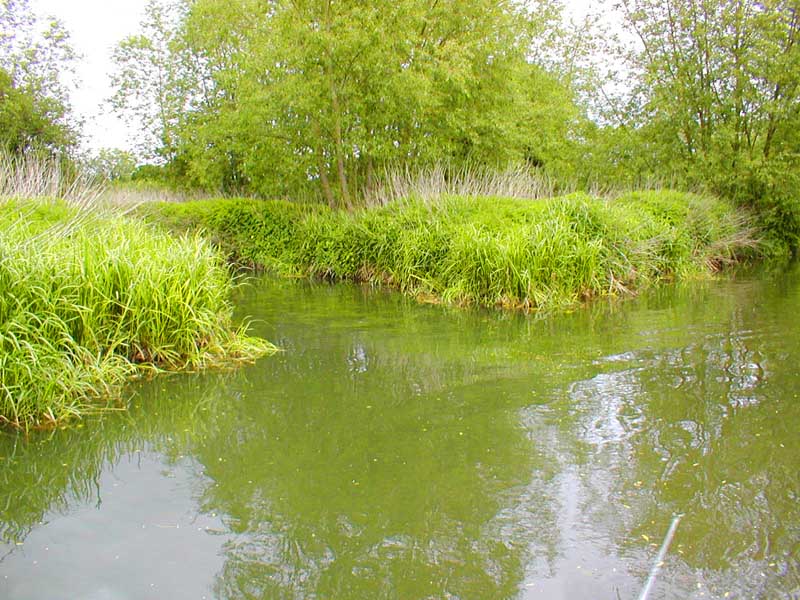 The stream to the right is Bullstake Stream, and to the left, Botley Stream.
Taking the right hand Bulstake Stream leads fairly shortly to Binsey Lane Bridge blocked by a small weir.  It would be quite easy to drag most small boats up there - it leads to Four Rivers after 500 yards via another weir and another branch into Osney Weir Pool that I was unable to follow up from Osney Weir Pool as it was too shallow. 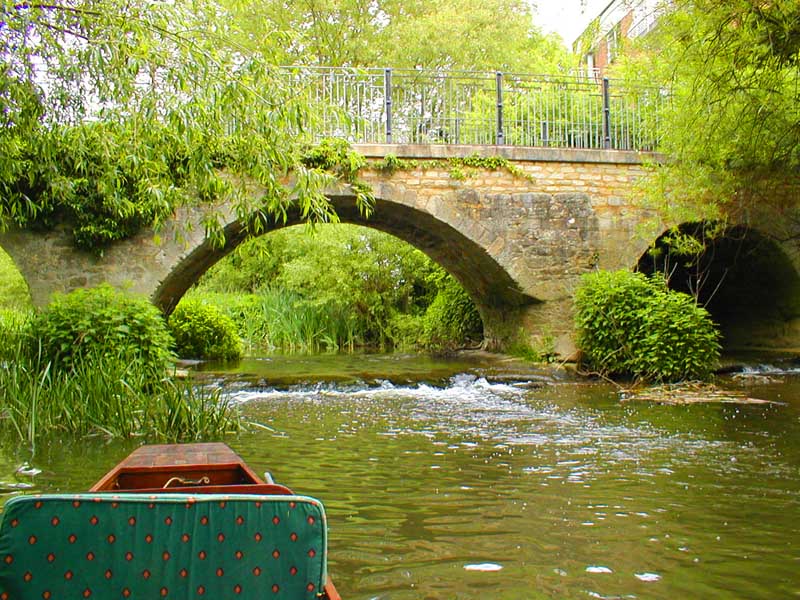 Turn and go back down.
Taking the other fork at the junction -
Allotments on left.

on right. I think it is probably safe, but don't stare that way too much!  If you can see it coming and its not moving it will hit you in the eye!

After about half a mile of varied and sometimes difficult punting you come once again to the main Hinksey Stream. To the left (downstream towards the Fishes) seemed unlikely (reeds). Turn right and you go upstream through a variety of obstacles until finally, most of the way to the Botley Bridge on the A420 (see Streetview above) we met a tree across the stream which proved conclusive.

From Thyrsis, a Monody, Matthew Arnold -

How changed is here each spot man makes or fills!
In the two Hinkseys nothing keeps the same;
The village street its haunted mansion lacks,
And from the sign is gone Sibylla's name,
And from the roofs the twisted chimney-stacks -
Are ye too changed, ye hills?
See, 'tis no foot of unfamiliar men
To-night from Oxford up your pathway strays!
Here came I often, often, in old days -
Thyrsis and I; we still had Thyrsis then.