1836:  When the Great Western Railway wished to cross the Thames at Maidenhead Mr. Brunel was inclined to have two arches to bridge the Right (east) bank channel. The Thames Commissioners however foresaw a small snag.  Two arches would probably mean that tow ropes would have to be let go above the bridge and re-attached below. They pleaded with the railway, and Isambard Kingdom Brunel kindly said he would do, what no one else had ever dared to do, he would design the flatest widest single arch ever seen.  And so he did.
1837: The Railway Magazine -

The bridge over the Thames at Maidenhead ... is to be of two arches, and constructed of brick.
The abutments are all raised above the water line, the centerings of both arches nearly fixed, and several courses of brick-work laid on the western arch.
The land arches on both sides are turned, and the brick-work generally is in a forward state.
The plank walls are also carried up to receive the embankment, which already reaches it on the eastern side, and in a few days will be quite finished.

The first stage of the railway opened from Paddington to a temporary terminus at Maidenhead Riverside, near the Bath Road at Taplow, as the bridge over the Thames was not complete. Many of the engines were delivered from Newcastle to Maidenhead by water, and then taken to Taplow. The terminus was built of wood, with platforms up on the embankment and offices down near the road, and access also possible from the road bridge. The first train ran on 31st May 1838. 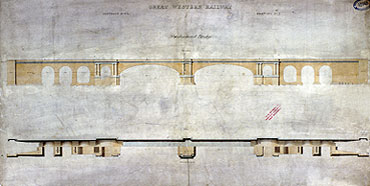 The Life of Isambard Kingdom Brunel, by Isambard Brunel, 1870 -

The great bridge over the Thames at Maidenhead contains two of the flattest, and probably the largest arches that have yet been constructed in brickwork. The river, which is about 290 feet wide, flows between low banks; in the middle of the stream there is a small shoal, of which Mr. Brunel took advantage in building the centre pier.
It was originally intended that the foundation of the bridge should be on the chalk, which was at a short distance below the surface; but it was found to be very soft, and Mr. Brunel therefore decided to place the foundations of the bridge on a hard gravel conglomerate overlying the chalk.
The main arches are semi-elliptical, each of 128 feet span and 24 feet 3 inches rise. They are flanked at each end by four semicircular arches, one of 21 feet span, and three of 28 feet span, intended to give additional water-way during floods. The radius of curvature at the crown of the large arches is 165 feet, and the horizontal thrust on the brickwork at that point is about 10 tons per square foot.
In the interior of the structure immediately landward of the large arches, Mr. Brunel constructed flat arches loaded with concrete. The centerings of these were struck, and an active thrust opposed to the main arches before their centerings were eased. The line of pressure of each main arch was diverted downwards by the thrust of the flat arch adjoining it without the necessity of employing a great mass of brickwork in the abutment.
( At the back of retaining walls, such as the abutments and wing walls of bridges which were subject to the pressure of earth behind them, Mr.Brunel introduced what were termed 'sailing courses,' projecting shelves corbelled out at the back of the wall. The weight of earth resting on these shelves virtually increased the weight of the back of the wall, and assisted it in resisting the forward pressure of the earth. )
The woodcut shows the form of the main arches and the flat arch referred to.

The Maidenhead bridge is remarkable not only for the boldness and ingenuity of its design, but also for the gracefulness of its appearance. If Mr. Brunel had erected this bridge at a later period, he would probably have employed timber or iron; but it cannot be a matter of regret that this part of the Thames, although subjected to the dreaded invasion of a railway, has been crossed by a structure which enhances the beauty of the scenery. 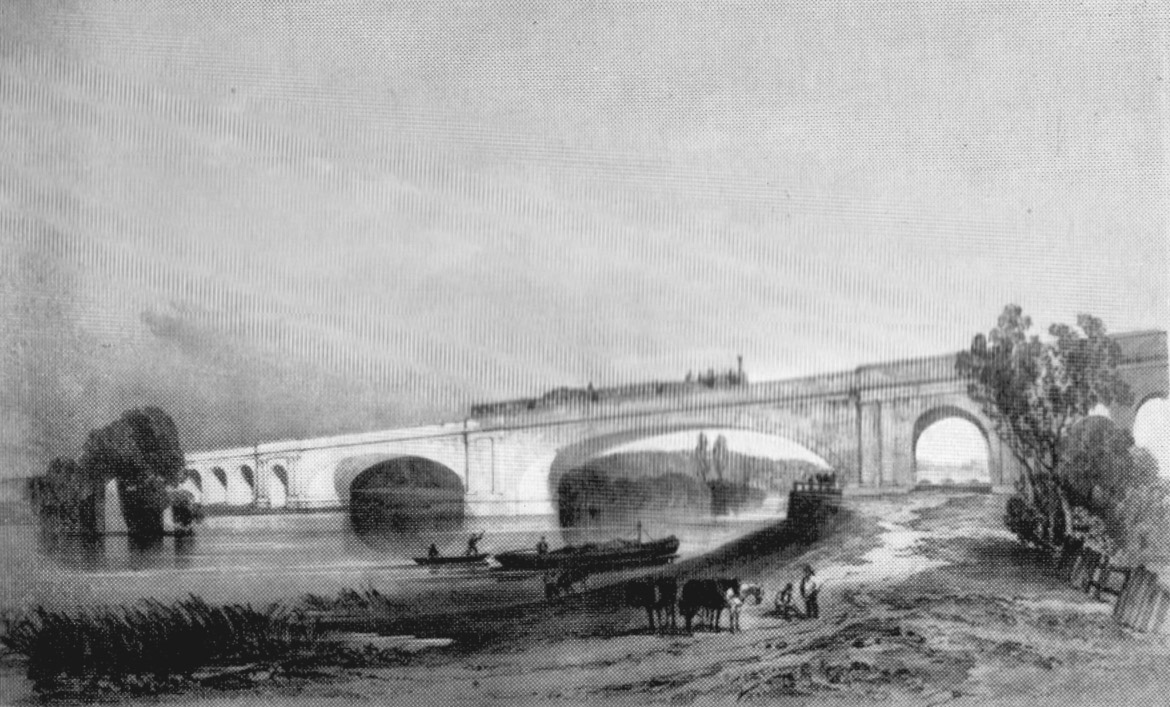 On the left of Turner's picture is Maidenhead Road Bridge with a boat on the river and to the right of that and just above three (four?) white marks that I would take to be the oarsmen of a four. The broad gauge of the railway for which the bridge was designed is evident.
However, if you have GOOGLE EARTH, try positioning the view to show that picture - and it cannot be done! The rail bridge in the picture is almost at right angles to the road bridge. I have tried all the other rail bridges on the Thames to see if any of them would fit better - but no. So we are left with Turner's imagination working overtime - which is perhaps no great surprise.

That this beautiful outline is wholly formed of insignificant little bricks, each course of which on this enormous span has not only to carry its own weight, but its proportion of the road and the train.  When he considers the strains to which these materials are exposed, and remembers that they are subject to a pressure that must approach very nearly to the limit of cohesion, he will sufficiently appreciate the courage and the capacity which have approached so near to the verge of possibility without transgressing its bounds.


A Rowing Race at Maidenhead Railway and Road Bridges, Postcard 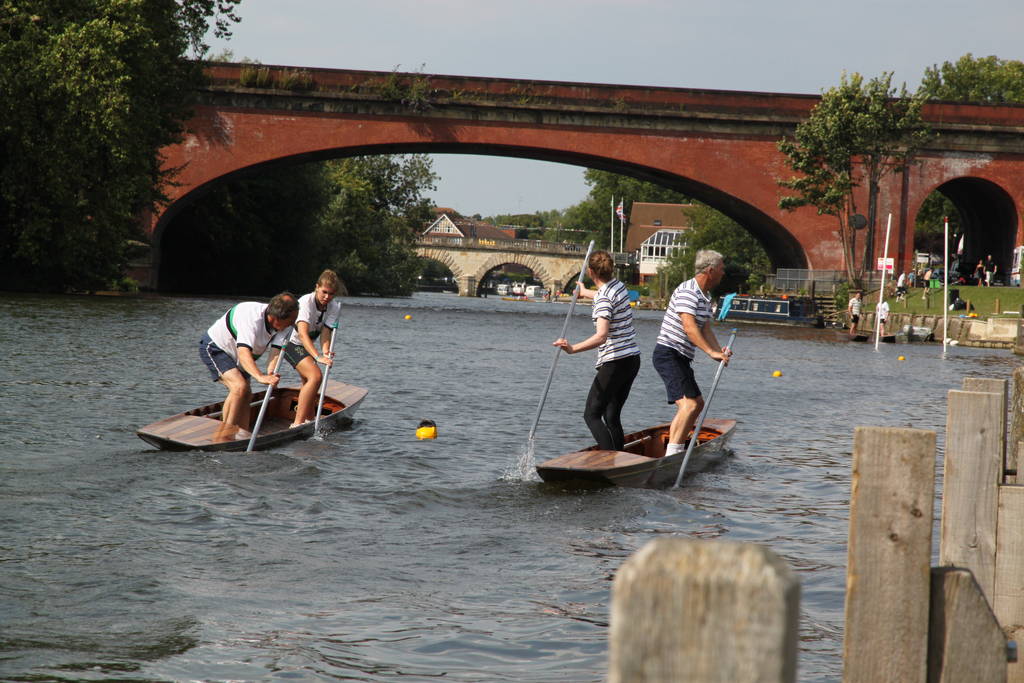 On the evening of Regatta day at Maidenhead I remember having just sat down to supper with Mr. Storey, who was staying with me at Mrs. Copeland's, when we were alarmed by hearing shrieks and cries for help; we ran out; it was getting very dark, and about nine o'clock, and according to my maxims no boat ought to have been moving on the water.
It appeared that some towns-people from Maidenhead were out on the water in a good-sized boat; there were nine persons altogether, amongst whom was a little girl, a stranger to the rest of the party, who had been take aboard from the bank, and they had just turned to the shore for the purpose of landing her, when their boat was struck amidships by an Eton eight, which was returning home at a great rate after a long day's row with its coach. The eight made a large hole in the other boat, which rapidly filled; some of the people in it tried to climb into the outrigger, and in the end the eighteen persons were all immersed.
We heard the screams from our cottage; the Eton boys soon swam ashore, and were hurried off to Skindles by their master, and taken safely home in a carriage; one of them had saved two lives before he left the river bank. The night was very dark, and no one seemed to know who was missing.
Six of the persons in the heavy boat were saved by different means, but the poor little girl was drowned, and a sailor who hired the boat, after saving one life, was found the next morning drowned, with a dead woman clinging round his neck.
There was a curious reason given at the coroner's inquest for not allowing any recompense to the boatman who had let the boat, for the damage done, and it was that as the sailor who hired it was a well-known bad character in the town, the boatman should have known better than to let a boat to him. Now as to the sailor's character one thing is certain, his end was heroic, and proved that the reputations held by us in this world may sometimes be far from the right ones.
Underneath the railway-bridge, if you get near one side of the long elliptical arch, there is a very remarkable echo, every sound being repeated a great many times, so that if you shout a single "ha", the echo replies with a wild peal of laughter, "ha-ha-ha-ha", &c., dying away fainter and fainter. As the fatal accident above narrated took place just above this bridge, and the bodies were found just below, the sounds beneath this arch that night must have been awful indeed. 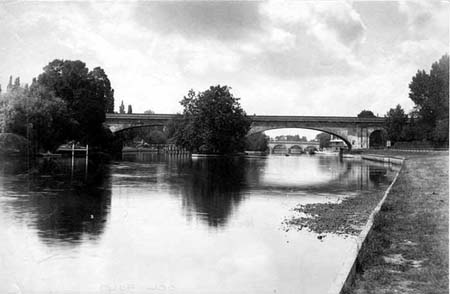 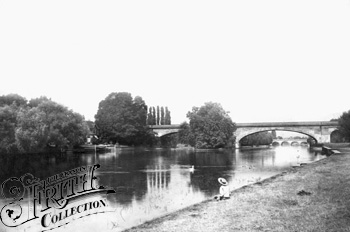 Maidenhead Railway Bridge astonishes me infinitely more than the great bridge across the Forth. or any other engineering feats. Yet sixty years have passed and the bridge not only stands as firmly as ever, but nowadays sustains the weight of trains and engines more than twice as heavy as those originally in vogue.
Moreover in the doubling of the line, found necessary in 1892, the confidence of the company was shown by their building an exact replica of Brunel's existing bridge, side by side with it.
Yet the original contractor had been so alarmed that he earnestly begged Brunel to allow him to relinquish the contract, and although the engineer proved to him, scientifically, that it must stand, he went in fear that when the wooden centring was removed the arches would collapse.
A great storm actually blew down the centring before it was proposed to remove it, but the bridge stood, and has stood ever since, quite safely.

...the double-arched railway bridge, designed by Sir Isambard Brunel, which carries the Great Western line from Slough to Henley and Reading.
Many a bright scene of river life may be witnessed hereabouts on regatta days. Under one arch of the bridge there is a weird and mysterious echo, which has become rather famous, for, if you say "Ha!" but once, there will follow a peal of singular laughter.
All travellers by the railway know the romantic scene that lies above the bridge, the quiet reach of water, the picturesque fishing cottage, the row of eel bucks, the many arches of Maidenhead Bridge, and the glowing woods and hills beyond.

Maidenhead Viaduct carries the Great Western main line: its very striking and powerful design deserves special mention as it contrasts so favourably with the many modern railway bridges that disfigure the Thames Valley. It was designed by the great railway engineer Brunel, and built in 1837-8, with a total length, of 778 feet, originally 30 feet wide but in 1891 increased to 60 feet. It is built of brick with two enormous arches. The original cost was £37,000.
The two other viaducts by Brunel are those at Moulsford and Gatehampton. 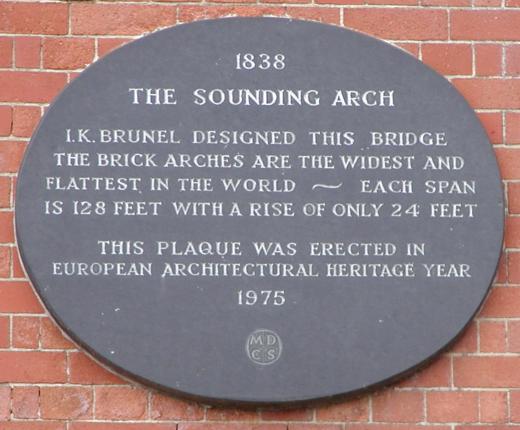 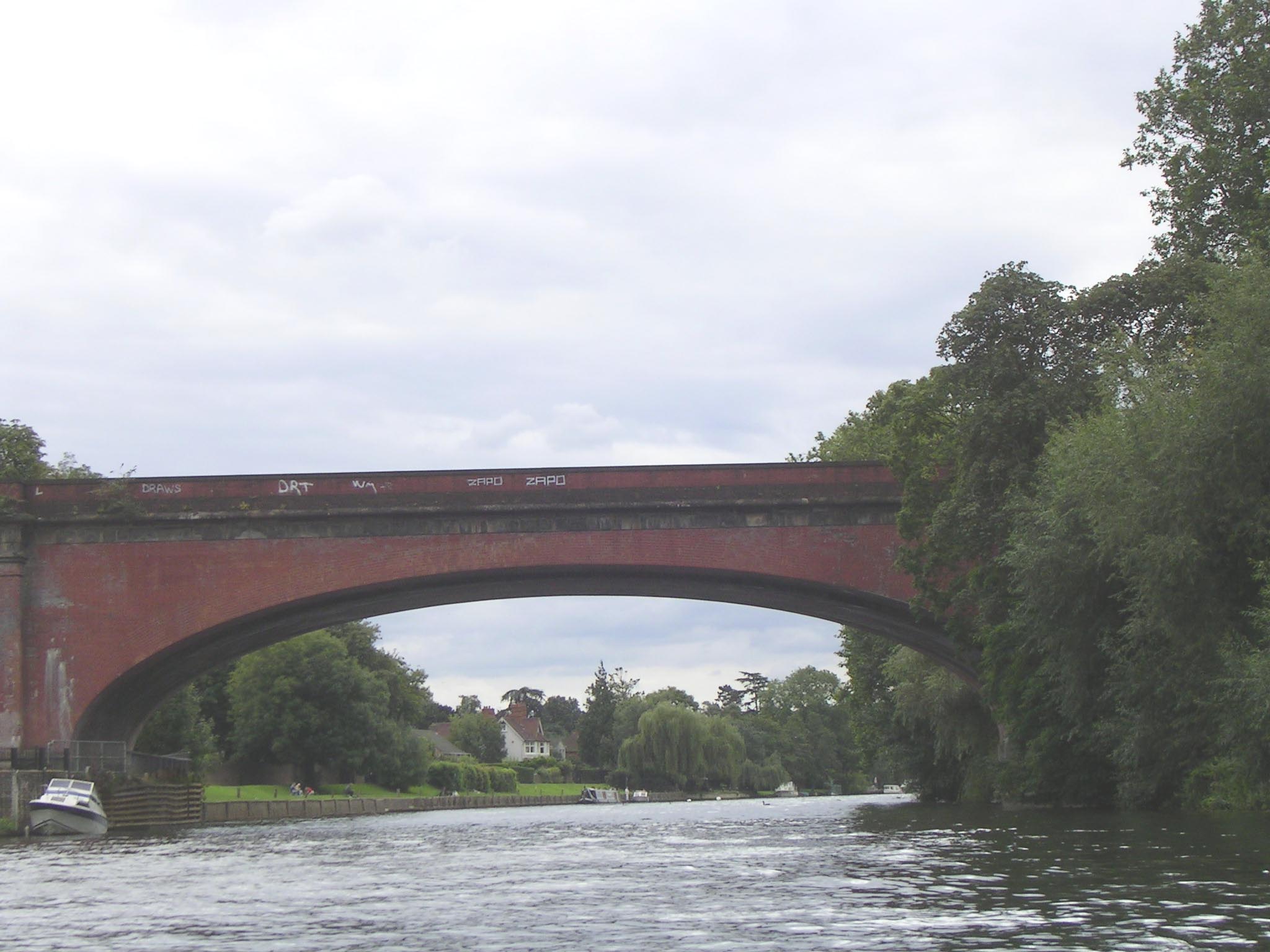 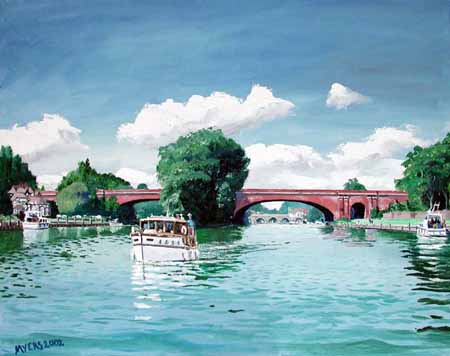 1846:  The stamp design is taken from this Lithograph – 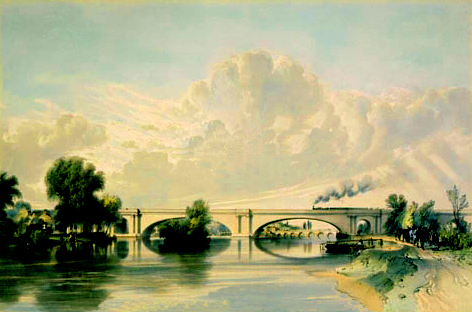 [ In the 1846 version there appear to be aircraft trails in the sky. This did not worry them in 1846, but in 2006 they had to be toned down otherwise there would have been cries of "anachronism!" ]

1999: To the east of Maidenhead Railway Bridge is a new railway bridge over the Jubilee River (flood relief channel) -

Maidenhead Railway Bridge is a Grade II* listed bridge.
As part of the Great Western Railway the United Nations has placed the bridge in the UK list for designation as a World Heritage Site.
The bridge is in the Taplow Riverside Conservation Area.