1851:  Reputed to have been designed by Albert, Prince Consort.  A cast iron bridge actually designed by Thomas Page. 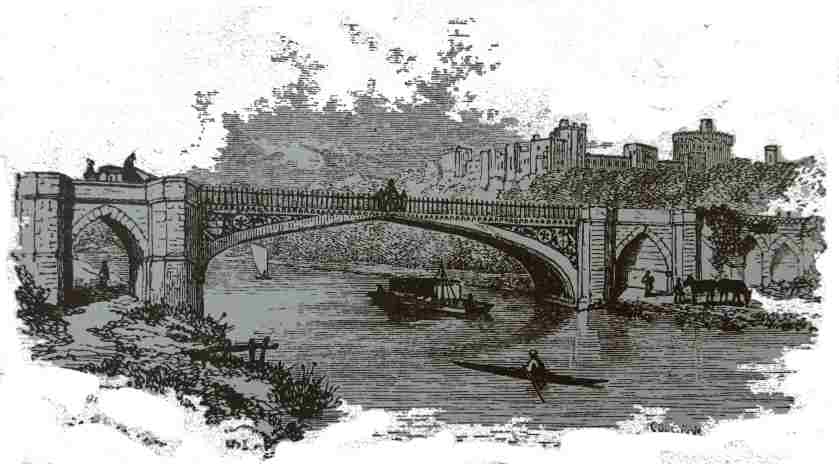 until we arrive at Victoria Bridge, a new and exceedingly graceful structure, which connects Windsor with the pretty and picturesque village of Datchet. The bridge, which has its companion a mile or so lower down the stream — the Albert Bridge WTSWG — was built in 1851, from the design of Thomas Page, Esq., civil engineer, the acting engineer of the Thames Tunnel, and the engineer for Westminster Bridge.
"Datchet mead" is the name given to the lowland on the banks of the Thames between the river and the Little Park. It is the scene of Falstaff's adventure in the buck-basket, and "the muddy ditch close by the Thames' side" existed until the time of Anne, when it was converted into a covered drain, and known as Hoghole. The embankment raised to form the approach to this new bridge destroyed the last vestige of this hole, together with the small brick arch over it. The scenery about this bridge is very charming — quiet lawns, rich woods, and the noble castle, meeting the eye on all sides. 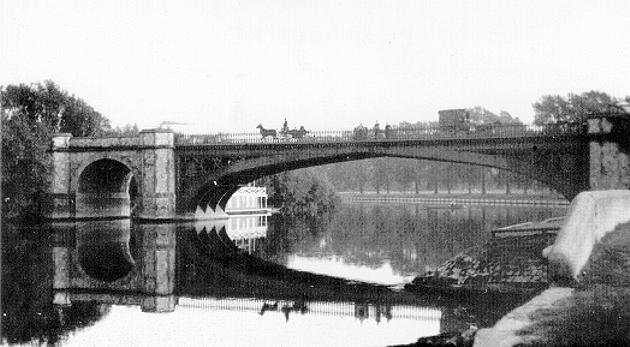 Victoria Bridge, Datchet, erected in 1851, the property of the Southern Railway, is constructed of iron with crested Balustrade in the Gothic manner. One centre arch in iron and two side arches in stone. Stone piers. 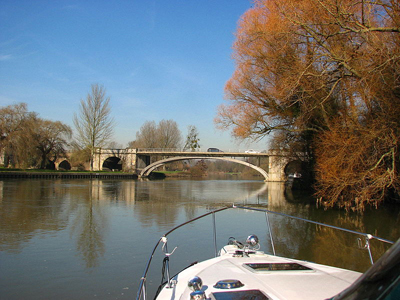 Victoria Bridge in 2008
This file is licensed under the Creative Commons Attribution-Share Alike 1.0 Generic license. 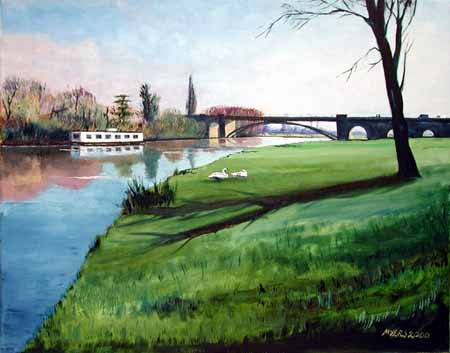 Crown property: No Mooring or landing

Notice that Windsor Castle is not nearly big enough to be viewed from a punt! 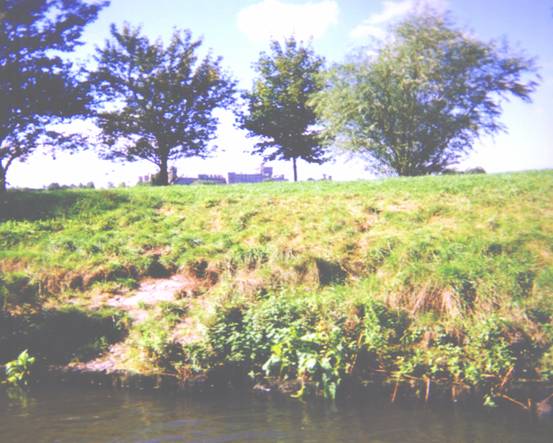 Windsor Castle from a punt

One of the most disagreeable objects on the whole journey I noticed when passing the Royal Park at Windsor, where through a small ugly black archway the sewage from the town or Castle found its way, in an entirely unsophisticated condition, right into the river, and I declined the use of the pole until I had passed the lock.  Yet here were quite a number of men in punts fishing for roach, which low-minded fish is taken in great quantities at this spot.

Thank goodness things have moved on a bit since then!  The water quality of the Thames seems to me to continue to improve.

1888: 'The Strange Adventures of a House Boat' William Black -

... And this ... the spectral grey thing rising high over the wide rich-foliaged landscape? That spectral grey thing is the stately pile of Windsor Castle ; and at the Round Tower floats the Royal Standard of England.
"Do you know what that means, Miss Peggy? The Queen is there just now."
"What," she says, "actually there - living in that building?"
"Undoubtedly."
She is silent for a moment or two.
"Well," she says, " I suppose you can't understand how strange that is to me. I dare say it's nothing to you. You see the Queen driving past in her carriage ; and you read about her in the newspapers. But to us at home - to an American girl at least - the Queen of England seems to belong to a long line of Kings and Queens ; to be one of a series of historical characters that one has read about so much ; well, I can't explain it to you ; but it does seem odd to think that she's only a woman, after all, and living over there in that house." ...
It was at the entrance to Windsor Home Park, where we were charged ninepence for permission to pass along this portion of the river (to the young Republican mind there seemed something very incongruous in this transaction, but no more incongruous than the costume of the Royal gate-keeper, who was in his shirt-sleeves, and wore a tall hat with gold braid round it) ...