"I suppose it's the same sort of thing all the way up now", remarked Martin, as they left Kempsford behind them. "Yes, the varnish will have all departed from the poor old Swan by the time we reach Cricklade", said Figgis ruefully; "this smashing through rush beds and dragging through shallows doesn't improve a boat much." "Never mind, captain, only six miles more", said Budd, "on you go."
They went on, the river becoming narrower and shallower as they progressed. Even below Kempsford it can be crossed at low water on the stepping-stones laid on the sill of the old weir; so it is plain that the end of the journey must be near.
Castle Eaton Bridge was next passed after a long struggle with some cantankerous rush-beds with weeds intermingled. The village contains some curious antiquarian remains, but the crew were too anxious to end their day's work to stop to examine them.

If you can pass this bridge you can probably get to Cricklade.

Built wt timber stone peers and planks & railes tis about 73 yards over 34 arches for water to pass & at ye end of a long stone Casway a bridge of 2 arches.  Postes between them make 8 Arches. 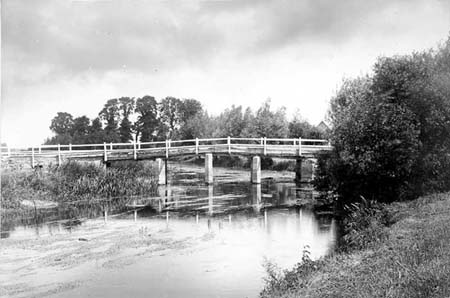 1893: A New bridge.
1896: 'A Tale of the Thames' by Joseph Ashby-Sterry - [coming downstream by canoe from Cricklade to Lechlade]

A little more than a mile and a half further will bring us to Kempsford, where we can have luncheon and get thoroughly dry. ...
they emerged from the shelter of the bridge, and though there is no vestige remaining of Lord Zouche's Eiton Castelle, whence the place takes its name, the caught a glimpse of the Rectory gardens, the quaint village, St Mary's Church with its picturesque bell-tower and its graveyard almost reaching to the water.
This, by the way, is the first church absolutely on the river bank, an example which is pretty extensively followed on the Thames from this point to Westminster Abbey.
They observe, too, that the river has here increased considerably in breadth, and in a little distance below the church at Washpool, it turns abruptly to the left at almost a right angle and then runs nearly parallel with the Thames and Severn Canal, approaching it more closely as it gets nearer to Kempsford, 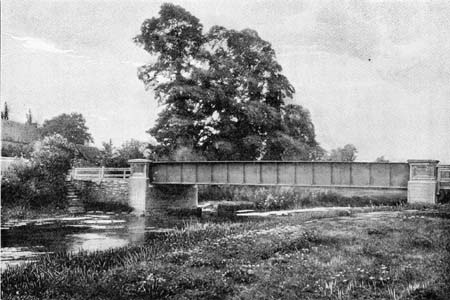 1909: The Stripling Thames by Fred Thacker -

A very new and very hideous trough of a bridge spans the water here at Castle Eaton.
Who was it said that whenever a new bridge is built across the Thames it is sure to be of iron, and red, and hideous?
Who would not weep for Sonning?
though since Sonning matters have improved a little; the railway bridge at Shiplake and the rebuilt one at Nuneham are a quite harmonious green.
Perhaps the shaft of ridicule pierced even the aes triplex of a railway company.
Would that little Castle Eaton had not been too early to share in the improvement; a village with a past much more important than its present aspect indicates.

Here the Thames was until quite recent years crossed by a most delightful old bridge, that looked like the ruins of some very ancient structure whose arches had been broken down and the remaining piers crossed by a makeshift affair of white-painted timber.
"Makeshift" is perhaps hardly the word to be properly used here, for it seems to indicate a temporary contrivance; and this bridge, if not designed in keeping with the huge, sturdy, shapeless stone and rubble piers, was at any rate sufficiently substantial to have existed for many generations, and to have lasted for many yet to come.
Alas that we should have to write of all this in the past tense! But it is so. Twenty years ago [1890], when the present writer paid his first visit to Castle Eaton, the old bridge was all that has just been described and more ; for no pen may write, nor tongue tell, of the beauty of that old, time-worn yet not decrepit, bridge, that carried across the Thames a road of no great traffic, and would have continued still safely to carry it for an indefinite period.
It was one of the expected delights of re-visiting the Upper Thames, to renew acquaintance with this bridge, sketched years before ; and it was with a bitter but unavailing regret and a futile anger that, coming to the well-remembered spot, it was seen to have been wantonly demolished, and its place taken by a hideous, low-pitched iron girder bridge, worthy only of a railway company; and so little likely to be permanent that it is observed to be already breaking into rusty scales and scabs beneath its hideous red paint.
The ancient elms that once formed a gracious background to the old bridge stand as of old beside the river bank ; but the old bridge itself lies, a heap of stones that the destroyers were too lazy to remove, close by, on the spot on which they were first flung.
No description, it has been said, can hope to convey the beauty of Castle Eaton Bridge, for the old stone piers were hung with wild growths, and spangled and stained with mosses and lichens. A sketch of one end of it may serve ; but it once formed the subject of a painting by Ernest Waterlow, and in that medium at least, its hoary charm has been preserved. 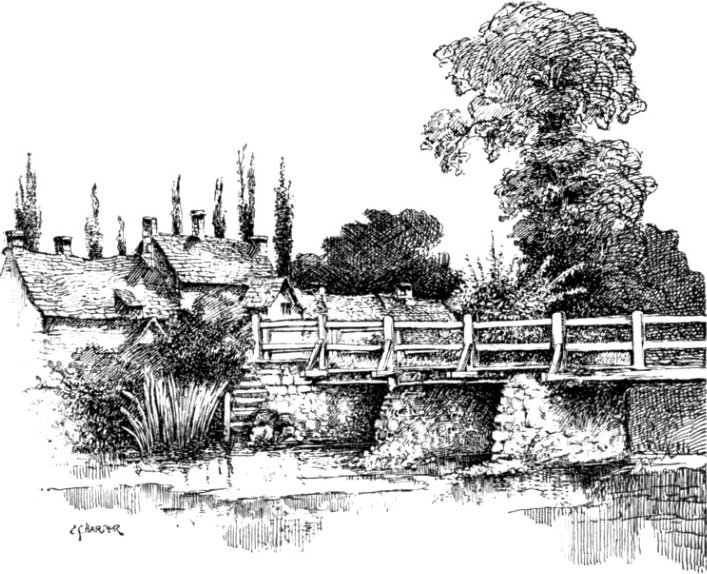 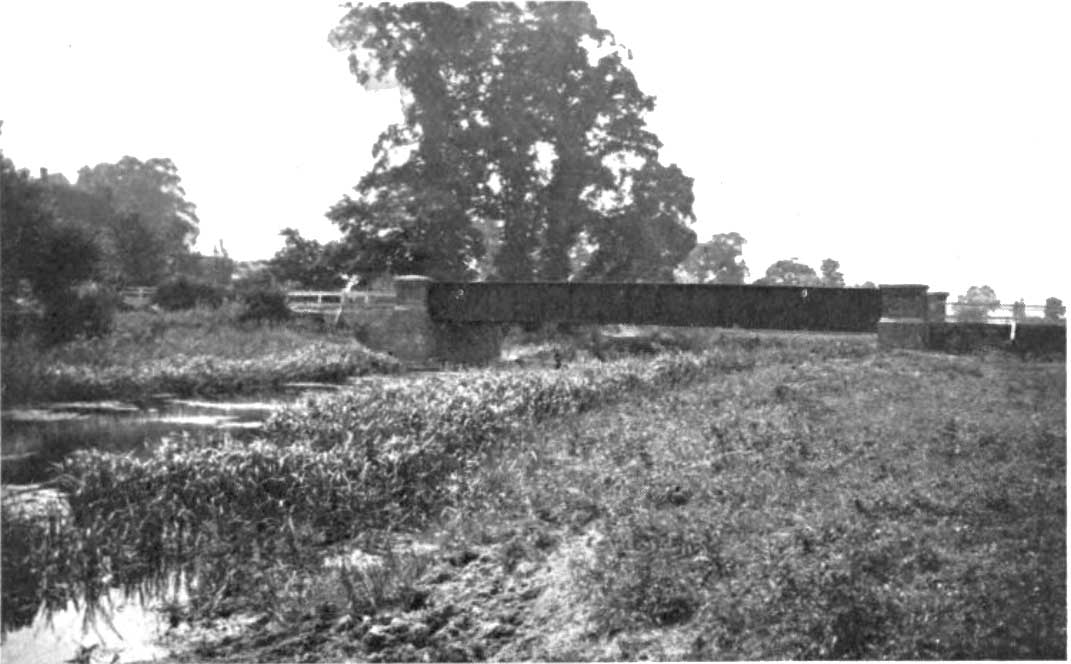 Let a photograph of its existing successor be here the all-too-shameful evidence of the wicked ways of the Thames Conservancy with this once delightful spot in particular, and with such spots in general.
We cannot frame to use language too strong for a crime so heinous against the picturesque. Let us recapitulate the facts, and draw the indictment more exactly against that sinning body. We shall thus ventilate a righteous indignation, and help to create a healthy public feeling against all such damnable doings, by whomsoever done. We are, of necessity, in this country of change and of an increasing population, faced with a continuous defacement of places ancient, beautiful and historic; and it behoves us to use our utmost efforts to preserve what we have left.
What, then, shall we say of such absolutely unnecessary outrages as this? Shall we not revile the whole body responsible, from the Board and the Secretary down to the chief engineer and the staff of underlings who did the deed? The Thames Conservancy, in fact, has been a most diligent destroyer of the beauty of the river; slaving early and late and overtime in that devil's work, but remaining supremely idle where the encroachments of private persons, or the uglifications by waterworks companies, and modern mill- and factory-builders are concerned.
It is the Thames Conservancy that has repaired the banks of the river and has reinforced the walls of its weirs and lock-cuts, with hideous bags and barrels of concrete, that retain their bag-and-barrel shape for all time, and so render miles of river-side sordid in the extreme. We simply cannot afford these ways with the river.

The present deplorable iron trough was thrown across, in place of the old bridge, in 1893.  The Conservancy is often blamed for its hideousness;  their responsibility amounts only to acquiescence;  I understand the Swindon District Board was the actual artist.

The old bridge was of timber with stone piers and stone causeway. It was replaced in 1893 by the present iron girder bridge with brick piers. The whole structure is of most deplorable design and painted a vermilion colour. This bridge was vigorously criticized at the time of erection, and it is still the worst disfigurement at Castle Eaton, and the only one on the river between Lechlade and Cricklade. It serves local traffic needs. 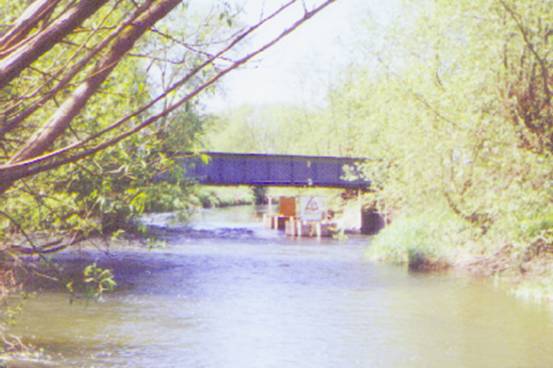 In 2002 I wrote "a temporary girder bridge with obstruction warnings beneath".  However it seems this is still the "deplorable iron trough" that Fred Thacker mentioned.
Water depth under the bridge maybe two feet.

2002: On first attempt the current halted the punt and rapidly returned it downstream.  A half shove did not feel possible (bridge too low).
For a second attempt I got out the double ended paddle and really went for it - unfortunately with much the same result - I could just keep the punt stationary under the bridge, but could make no further progress.
For the third attempt I stood down off the till (Thames style!) and punted, succeeding in using several half shoves under the bridge.  The current just above the bridge was enormously strong and it took me a minute or two of strenuous work to clear the few yards above the bridge, all the time in danger of being turned and swept down into the bridge.  Fortunately the current then let up and the next section had a much easier flow.

I do not know that there is now one stone of it [Castle Eaton Mill] left upon another.  It was on the Left bank about a quarter of a mile above the bridge.