Kelmscote Manor and the Plough at Kelmscott

1909: This section in The Stripling Thames by Fred Thacker

Built in the seventeenth century, The Plough was an old favourite of English textile designer, artist, writer and socialist, William Morris. Just a stones throw away from the River Thames, The Plough is popular today with the walking and boating fraternities and those wanting a relaxing break to get away from the hustle and bustle of urban life.
The Plough at Kelmscott was recently renovated following flooding in the Cotswolds. Its ecological impact was at the heart of the re-development. Every aspect of the re-design from state of the art Swiss induction ovens to under floor heating deliver on the commitment of The Plough to be environmentally aware.
The Plough at Kelmscott offers exceptional, quality, locally sourced food with a fresh, seasonally evolving menu. Why not join us for a light lunch from our ever-changing snack menu, or join us for a heartier meal either at lunch or dinner where our chef will inspire you with locally sourced ingredients such as the village's own pork belly from Kelmscott pigs or Milton farm beef from Fairford. Wash this down with one of our locally brewed real ales from the nearby Cotswolds market town of Lechlade, either in front of the roaring fire in the winter months or in our delightful garden in the summer.
Round off your visit with an enjoyable stay in one of our eight en suite bedrooms with Jacuzzi - designed with your comfort and a restful night's sleep in mind. 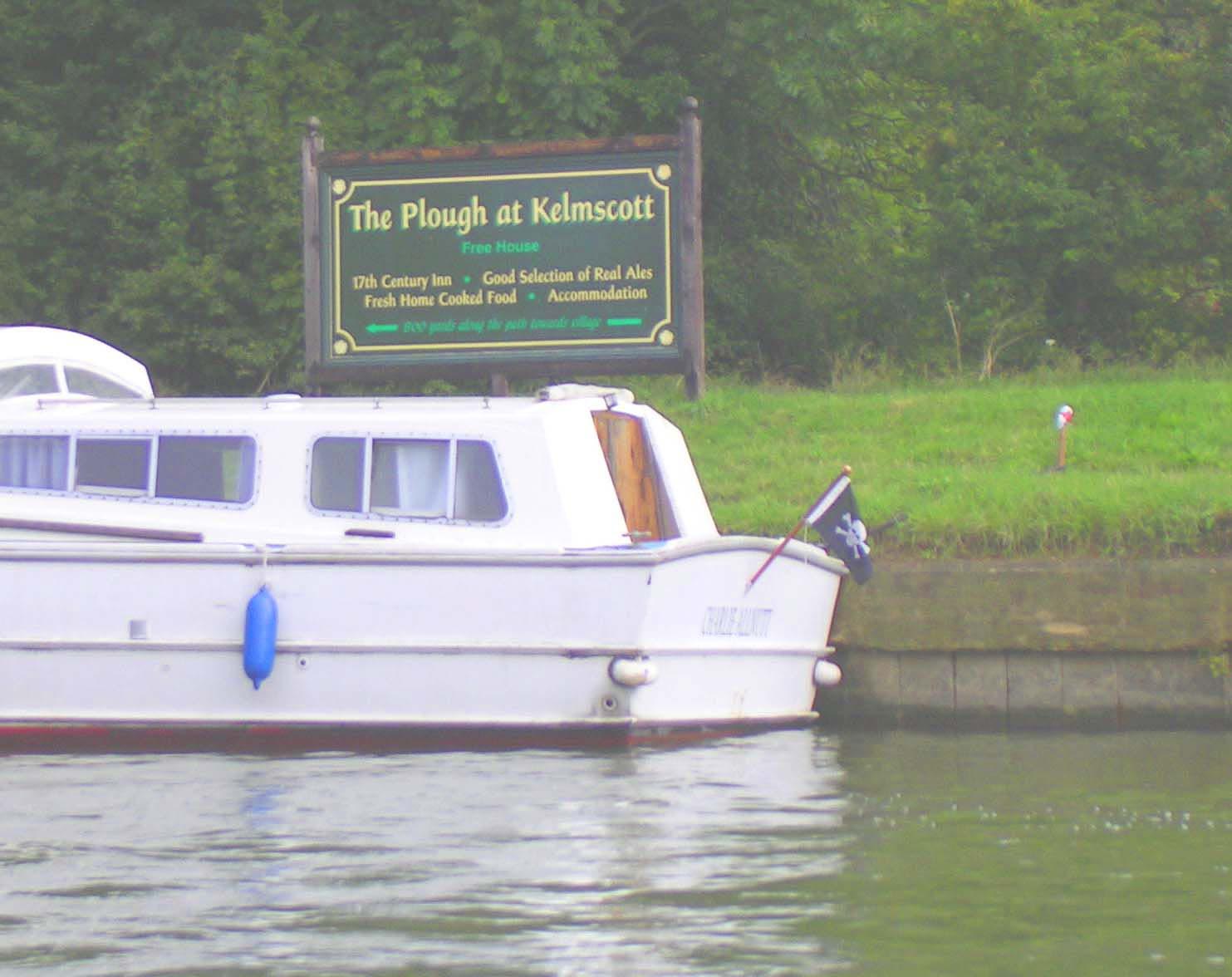 Beware of cattle - they can be aggresive and some time ago a boater was seriously injured by being tossed and trampled on in this area.
Do not try to walk a dog through a field with cattle unless you are certain!

Rossetti, on the Village of Kelmscott -

4 April to 31 October
General Open Days: Wednesday and Saturday, 11.00am to 5.00pm
Ticket office opens at 10.30am; last entry to the house is at 4pm.
We manage the visitor flow through the Manor House by timed ticket entry in 15 minute intervals, therefore there may be a short wait for entry. However, there are several areas to explore while you wait, including the Garden, Tearoom and Shop. Adults £11

The Old Manor House was William Morris and friends' country retreat - follow the footpath away from the river.  The house is the first on your left.  For the village and pub continue straight on.  Both are worthwhile in their different ways.  The pub does good meals, and several of the cottages bear the marks of the enthusiasm for rural architecture which William Morris embraced.
Book your trip round the house first (for they limit the numbers and give each person a time) and then, while you wait, wander the gardens which are a splendid combination of contrived planning and wildness.  In the house you will probably remember most the strange staircase, logical but I can't quite imagine running down it

Love is enough: though the world be a-waning,
And the woods have no voice but the voice of complaining,
Though the skies be too dark for dim eyes to discover
The gold-cups and daisies fair blooming thereunder,
Though the hills be held shadows, and the sea a dark wonder,
And this day draw a veil over all deeds passed over,
Yet their hands shall not tremble, their feet shall not falter:
The void shall not weary, the fear shall not alter
These lips and these eyes of the loved and the lover.

We continue our voyage to the pretty villages of Kelmscott and Eaton Hastings, and continue still by the river-side, by green meadows, which, in their solitude, seem to progress unaided by the art of man. Kelmscott has a small cruciform church. The arches, which occupy the centre, are supported by early foliated capitals. In the chancel window is an old piece of painted glass, representing St. George and the Dragon. It may be of the time of Edward III.

1871: Dante Gabriel Rossetti wrote "Down Stream" while punting on the Thames near Kelmscott in late July.
[ a little morality tale - boy takes girl boating ... ; girl has baby ; girl commits suicide. ]
definitely not to the modern taste - and not to mine either, so I'm not going to record it! (That'll teach him.)
And to add insult to injury he says 'punting is not a very poetic style of locomotion'! It certainly ranks well above most I know ... ]

The verses are a little ballad or song or something made in a punt on the river, not a very poetic style of locomotion. It's rather out of my usual way, made aiming at the sort of popular view that Tennyson perhaps alone succeeds in taking.

Between Holmscote and Hurstcote
The river-reaches wind,
The whispering trees accept the breeze,
The ripple's cool and kind:
With love low-whispered 'twixt the shores,
With rippling laughters gay,
With white arms bared to ply the oars,
On last year's first of May. 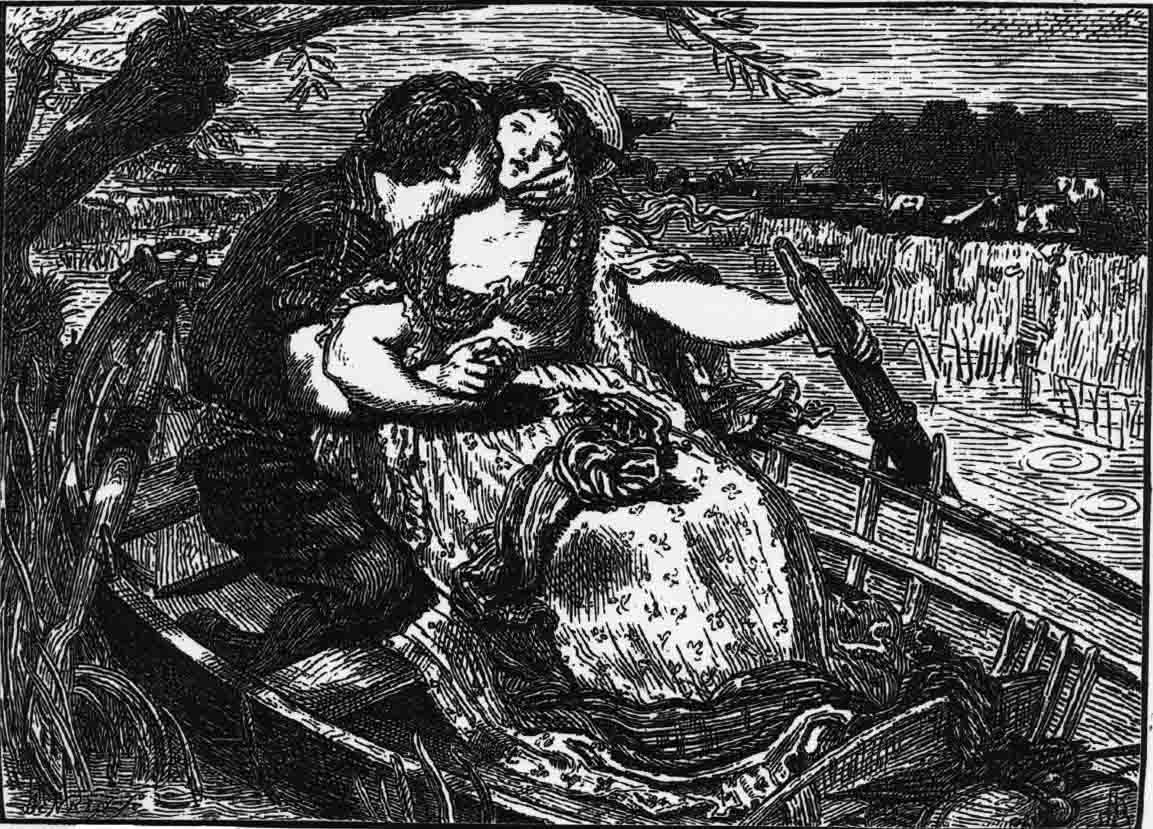 Between Holmscote and Hurstcote
The river's brimmed with rain,
Through close-met banks and parted banks
Now near now far again:
With parting tears caressed to smiles,
With meeting promised soon,
With every sweet vow that beguiles,
On last year's first of June.

Between Holmscote and Hurstcote
The river's flecked with foam,
'Neath shuddering clouds that hang in shrouds
And lost winds wild for home:
With infant wailings at the breast,
With homeless steps astray,
With wanderings shuddering tow'rds one rest
On this year's first of May.

Between Holmscote and Hurstcote
The summer river flows
With doubled flight of moons by night
And lilies' deep repose:
With lo! beneath the moon's white stare
A white face not the moon,
With lilies meshed in tangled hair,
On this year's first of June.

Between Holmscote and Hurstcote
A troth was given and riven,
From heart's trust grew one life to two,
Two lost lives cry to Heaven:
With banks spread calm to meet the sky,
With meadows newly mowed,
The harvest-paths of glad July,
The sweet school-children's road.

Rosetti was very pleased with the two illustrations: He wrote to Ford Madox Brown -

it is like a tenderer kind of Hogarth and seems to me much the most successful of your book illustrations. . . . The little one is very pretty too.

William Sharp - The Thames from Oxford to the Nore -

The last time I saw Morris at Kelmscott Manor was just such a day as that on which a year or two later he was buried in the little churchyard close by: a day of chill October, with a rainy wind soughing among the alders, and the damp chrysanthemum petals blown about the garden-ways beneath a low grey sky.
I think this was in 1894: at any rate, I recollect it was on a day when he had just received a welcome letter from Swinburne relative to the publication by the Kelmscott Press of certain old thirteenth-century reprints of French prose.
I remember the latest (or one of the later) volumes was lying on the table, near the window, against which a sleety rain pattered - the Violier des Histoires romaines - and in his letter about it Swinburne recalled their mutual delight in these old French prose-poems "in the days when we first foregathered in Oxford," . . . that is, forty years earlier, for it was in January 1856 that, there, the young undergraduate Algernon Charles Swinburne first met Morris and Rossetti.
It was not at his beloved Kelmscott Manor, however, that William Morris died, though buried in the village graveyard; but at Kelmscott House, his London home in Hammersmith.
With him passed away one of the most fervent of Thames-lovers and one of the greatest of those who have set their seal upon the Royal River. 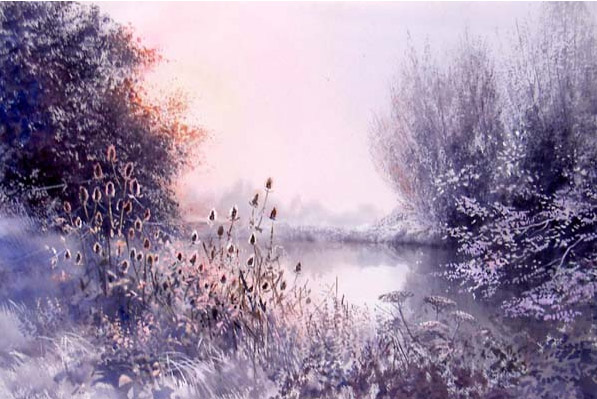