THE SWAN INN at Radcot

Right bank below bridge. No mooring at Inn itself, try left bank and walk over bridge.

The right bank island on which the Swan stands.

The left bank of the main channel, island opposite the Swan. Camping by permission from Swan.
The name is on 18th & 19th century maps (Rocque Berkshire 1761 & Greenwood 1824 in Thacker's copy) 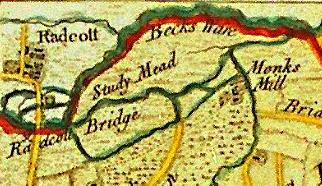 Ye Olde Swan is situated in a stunning location aside the River Thames at Radcot Bridge, originally an old packhorse bridge on the main wool export route from Northampton to Southampton. The bridge, which claims to be the oldest crossing of the Thames was built around 1200. Ye Olde Swan has been a stopping off point for weary shepherds and travellers for hundreds of years to enjoy fine ales and good food. Nothing has changed, though the sheep have long since disappeared.

Our initial membership of 25 boats has grown to 120 and we have a waiting list! [2017] We do not have the expense of a Club house which means our annual membership fee is only £20. Our membership runs from Lechlade to King's Lock. You are eligible to join us if you own a boat and moor it anywhere between those two locations. We have our own crane out facilities run on behalf of the members and we regularly lift and winter store 64 boats every year. 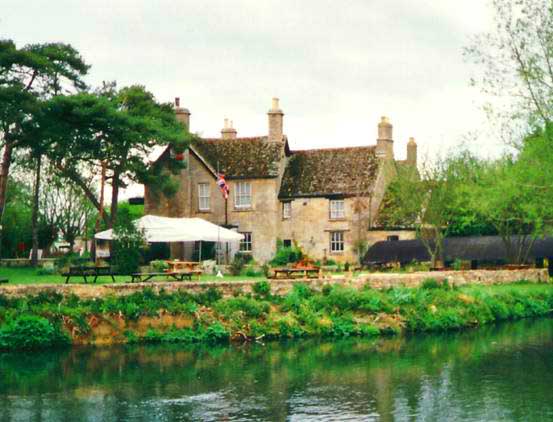 But thou art sweet, my native stream!
Thy waves in liquid lustre play,
And glitter in the morning beam,
And chime to rest the closing day.
While the vast mountain's dizzy steep
The whirlwind's eddying rage assails,
The gentlest zephyrs softly sweep
The verdure of thy sheltered vales:
While o'er the wild and whitening seas
The unbridled north triumphant roars,
Thy stream scarce ripples in the breeze,
That bends the willow on thy shores.

Idyllic indeed: but the poet might have written less carressingly had he spent the dark hours in my boat one wild August night as I lay by the Swan at Radcot, and wondered whether the Southwest would hurl some elms across me first, or break my mooring lines that strained and jerked so unceasingly at their knots. You get wild grey water, you get wind as iron that rings, here by the Thames as truly as beside the sea.

Drink some much needed pints of beer at the Swan.

I spent some pleasant days at the Swan by Radcot Bridge.
The house is yours, said Mr Bowl the landlord, when I put my bag inside his door.
You go where you like and ask for what you want;  a couple of extra eggs for breakfast or a pot of tea at any time.  There's boats in the boat-house, help yourself, and if you want to make a splash in the river there's deep water under the diving stage by the bridge.
I was content to sit in the garden and watch, appropriately enough, the swans, seventeen of them, riding so proudly the wind ruffled water, or gliding effortlessly where no ripple but of their own making, disturbed the reflected light. Kingfishers streaked up and down stream, swallows splashed as they swooped at drowning insects, wagtails pied and grey ran to and fro about the lawn. 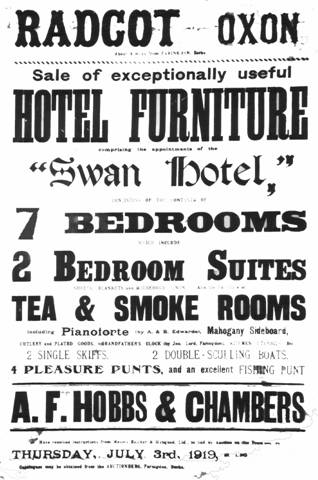 Notice the sale here in 1919 included the sale of its hire fleet comprising 2 Single skiffs, 2 double sculling boats, 4 pleasure punts and an excellent fishing punt.
We have lost a lot of ground in the way we use our rivers today!