Several complaints were put up by the men of Kingston-Bagpuze and Stanlake for to have [Newbridge] repaired.
[It had fallen into decay'].
Whereupon one Thomas Briggs, that lived in a hermitage at that end of the bridge next to Stanlake, obtained license to require the goodwill and favour of passengers that way and of the neighbouring villages:  so that money being then collected, the bridge was repaired in good sort.
This hermitage was a little old stone building, but beyond the memory of man it hath been an ale house, or pettie inn for travellers, called The Chequer.  It belongs to Lyncolne College and Dod the tenant pays 3 shillings and 4 pence per annum for it by the name of The Hermitage alias The Chequer Inn in the parish of Stanlake.
(March 1659).

1791: Newbridge and the Rose Revived by Samuel Ireland - 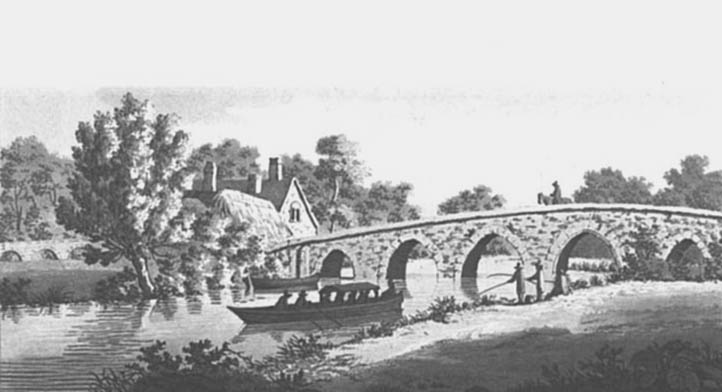 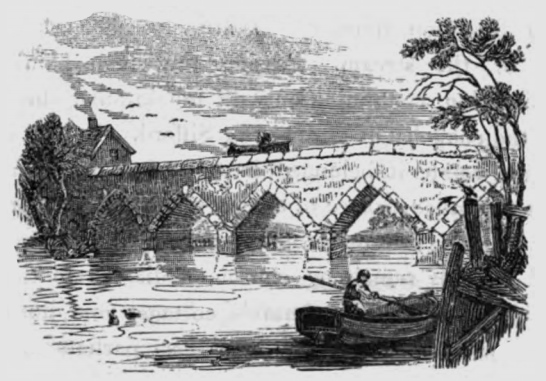 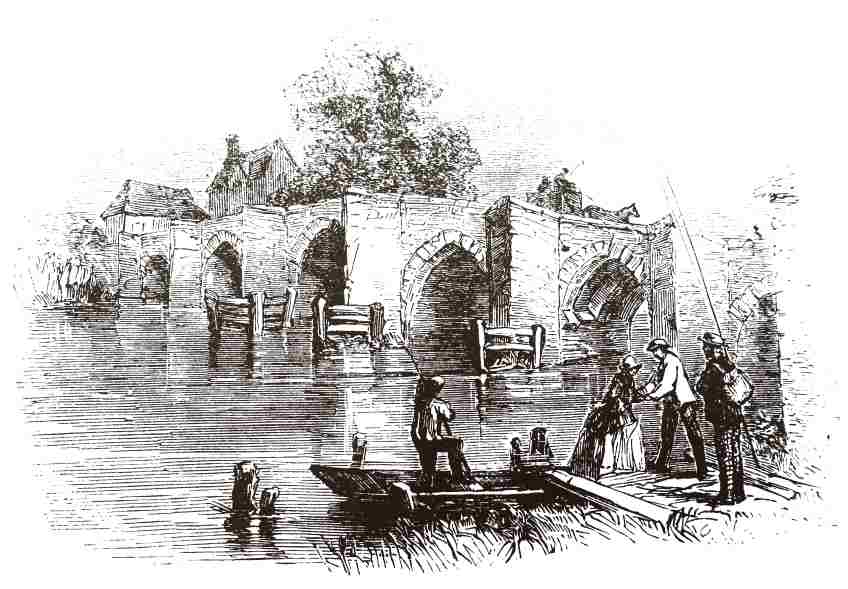 1859: Newbridge,
taken from the 'Maybush' with, behind the bridge, 'The Rose Revived'

Arrived at New Bridge, we again pause awhile to look around us — to ponder and reflect. The neighbourhood is unchanged since Leland described it as
"lying in low meadows, often overflown by rage of rain":
a small inn stands on the Berkshire side, and a busy mill on that of Oxfordshire; in the time of the venerable historian, there was here "a fayre mylle aprow lengthe of"; and it is probable a hostel also entertained the wayfarer.
Age has preserved only the bridge, which was "new" six centuries ago, and is now, we believe, the oldest of all that span the river*.
* Its construction is worth noting, as it is a good example of ancient bridge building, with its groined arches and its projecting piers, which not only give strength to the structure, but protection to the traveller, who could shelter in their angles while the roadway was occupied by passing waggons. As a breakwater these piers had an additional value. 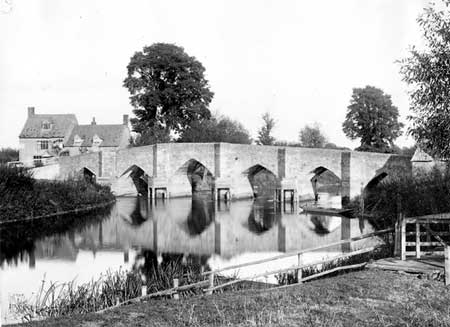 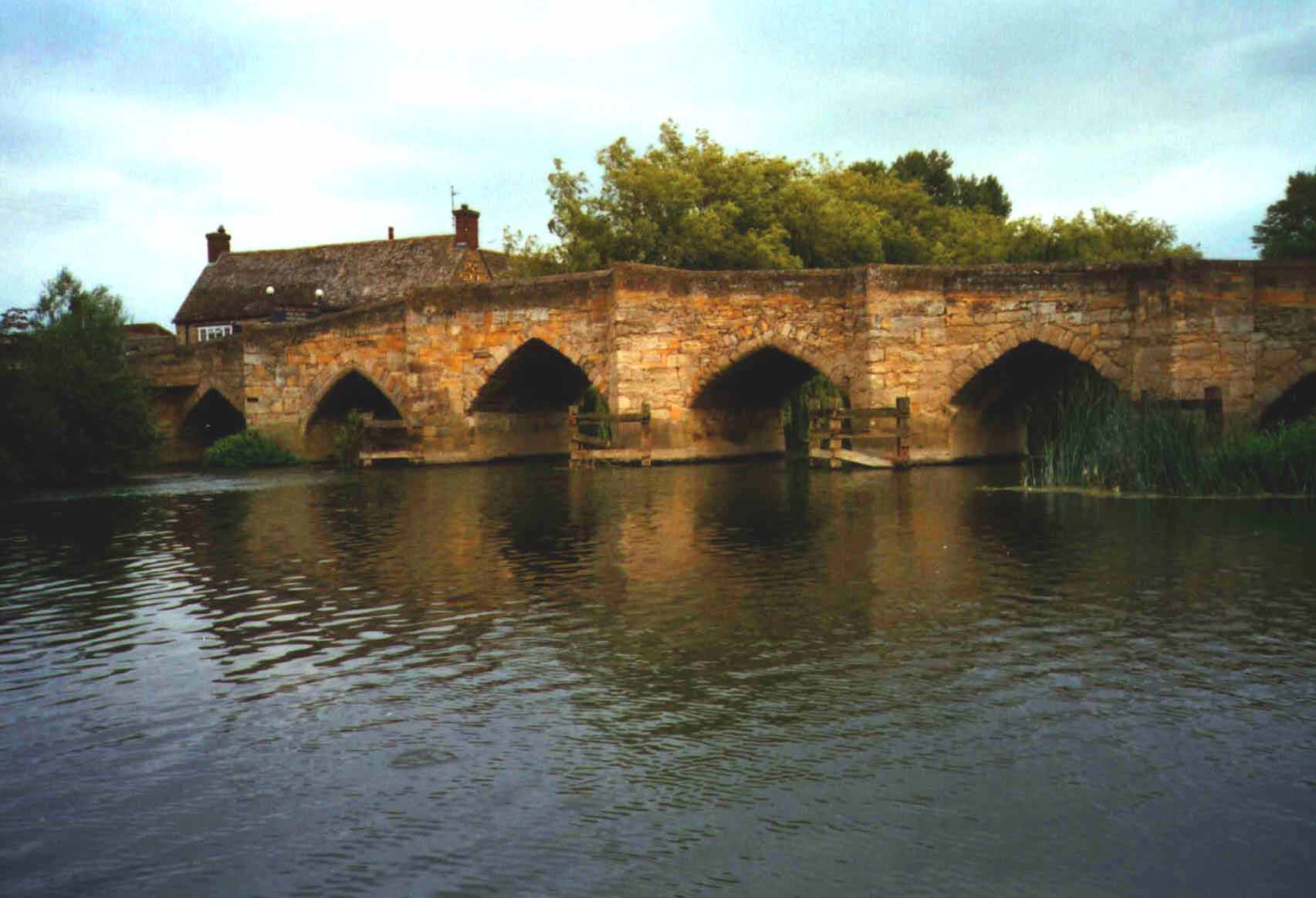 2005: The Rose Revived behind Newbridge, from upstream.

John Galsworthy, Over the River -

On the little old New Bridge over the Upper Thames he stopped. Something special about this upper river, quiet and winding, and withdrawn from human blatancy! In full moonlight now the reeds glistened and the willows seemed to drip silver into the water, dark below their branches. Some windows in the inn beyond were lamp-lit, but no sound of gramophone came forth. With the moon riding so high, the stars now were but a pricking of the grape-coloured sky; the scent from the reedy banks and the river fields, after a whole week of warmth, mounted to his nostrils, sweet and a little rank.

I rode then 2 myles and half through fayre champayne ground, fruitfull of corn, to New Bridge on Isis. The ground there all about lyeth in low meadow, often overflown by rage of rayne. There is a long causeye of stone at each end of the bridge. The bridge itself has 6 grate arches of stone.

1644: The bridge was the scene of a [Civil War] skirmish on May 27th, 1644, in which Sir William Waller was repulsed, "retiring", says Taunt, "to Abingdon, where he revenged himself by destroying the beautiful market cross".

New Bridge on Bark sheir side has 17 Arches to ye main bridge.  The main bridge has 6 Arches & is about 53 paces or yards over On Oxford sheir side beyond ye main bridge are 28 arches.  The Causeway on Oxfordshire side is about 300 yards & ye Causway on Barkshire side are 373.
And in all over Causewys & Bridge about 726 yards Over 51 Arches, to vent water in great flouds.

At New Bridge there are many serious obstructions.  The best arch for navigation, 17 feet 11 inches wide, is totally obstructed in low water time by the land above the bridge having grown by degrees [by the action of the Windrush] quite across the River towards the south, with trees thereon.  A straight cut should be made through this land or Eyet.
All the ribs and their impost stones should be cut out of the Arches, as they are no use, and damage barges greatly.  The third arch should have the pointed Arch cut away, and a new Flat one thrown over, on the same piers.

1801: Some (thankfully limited) repairs were done.

... Newbridge, with its pointed arches and projecting buttresses. "I don't see anything very new about this", said Figgis. "Probably not", remarked Charlton; "it's about six hundred years old the oldest bridge on the river. It's called Newbridge on the lucus a non lucendo principle, I suppose. "Yes", added Budd: "or else on the sic vos non vobis; I don't know what either means."

[ Oh dear - more Latin - Lucus a non lucendo" = "its a dark grove because it's not light"! which pithy, if obvious, saying implies "don't go bothering your head about bogus etymological definitions". Just because it's called "Newbridge" doesn't mean it's new!
And as for "sic vos non nobis" "This you do, not for yourselves" it's adequately explained here, though what it has to do with Newbridge is a mystery. ]

"At any rate, we must knock off towing", said Figgis; "so jump in. The stream is pretty strong through those narrow arches; we shan't have too much room. You must pull hard, Charlton."
The line was taken aboard, together with Martin, who had been towing alone. Charlton was seated on the stroke thwart, and gave way lustily, whilst the captain steered carefully for the centre.

"Put your back into it!" shouted Figgis. Then in a much louder tone, "Back water! Hold her up!" It was too late! The towing-mast struck the arch of the bridge and snapped off, in spite of Charlton's backing water as hard as he could. They drifted to the bank to inspect the damage.
"Who on earth would have thought they would build their stupid bridges so low?" asked Martin. "It's evident this was the first they built", said Budd. "It's an experimental one." "It isn't quite such a bad job as I feared", said Figgis, who had been examining the fracture. "The split is pretty long; I think we can splice it. Who has any string?" There was not a piece in the boat, as they all confessed with shame. The best substitute was a few yards of the towing-rope, which was partly unravelled to give better hold. This little accident detained them sometime, and they felt it was fortunate they had an easy day's work.
The next attempt to pass the bridge was successful, but they found that the current of the River Windrush, which joins the Thames just beyond Newbridge, necessitated a good pull to counteract it.

A long mile upstream from Ridge's [Hart's Footbridge] lies grim old New Bridge, frowning down like a fortress upon your approach.
It has six pointed arches of stone (seven, one told me locally, but I never could count them so), and a modern extension of several round arches for times of flood.
There is a strong indication of a cross socket over one of the piers on the western parapet.
It is new in name only, having been built about 1250 by the monks, it is said, of a former abbey here; and is popularly spoken of as the oldest surviving bridge over the Thames, though some object that it was called "New" in respect of Radcot Bridge, which would then be the most ancient.
It lies fifteen miles from Oxford, and has an inn at each end, the "Rose" in Oxfordshire (the "Old Rose Revived", says Taunt), and the "Maybush" in Berkshire.
Leland crossed here ... [quoted above]
Leland's "rage of rayne" has more than once stormed down upon me as I lay under my boat's canvas against the Maybush bank, peering out to watch the thunder wrack stalking across Berkshire on the wings of the strong Southwest.

This bridge has great antiquity, and this belies its name,
For like historic Radcot Bridge, it owes its present fame,
To having been the scene of a stormy battle long ago,
When Charles I was England's King, and Parliament his foe.
And when the King held Faringdon, a town some miles away,
The Roundheads were endeavouring to cross the bridge that day.

New Bridge carries the Witney - Abingdon road: it was built about 1250, probably by the monks of some neighbouring monastery, but it is possible that the original bridges at Windsor and at Radcot were in existence when New Bridge was built.
It appears from old records to have been largely reconstructed in the middle of the fifteenth century, and repaired in 1801. Leland in 1535 reported it as having six "great arches of stone"; also "lying in low meadows often overflowed with rage of rain". Today it has five pointed arches, including two with ribs.
There are cut-waters on the upper side only, carried up as refuges for pedestrians. It is approached on the Berkshire side from a nineteenth century flat stone bridge with small semi-circular arches over the flood-lands.
The 1894 flood-mark on the old bridge is near the crown of the arches and above the flood-level of the Rose Revived Inn on the Oxford bank. This inn, all in stone, composes well with the bridge; it has an annex of rough elm boards and grey asbestos roof that is not offensive. Immediately above the bridge the River Windrush joins the Thames from the Cotswolds.
We recommend that this bridge should be carefully preserved. 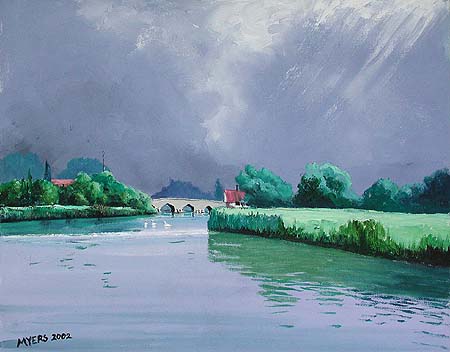 I hope Doug had his waterproofs handy! 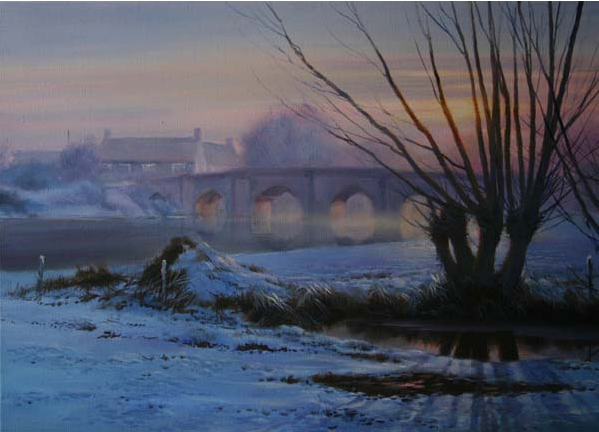 The last remaining substandard bridge on the principal road network is Newbridge carrying the A415 over the River Thames at Standlake. This bridge is scheduled to be replaced in 2009/10/11 because strengthening is not possible and work has started on identifying options that will preserve the historic bridge and provide an alternative crossing.

The plans have now (2010) been abandoned for financial reasons, after an enormous amount of planning involving six possible types of additional bridge.
This now leaves the current situation unresolved. The bridge is not adequate to its traffic but is historic and scheduled as an ancient monument. Heavy traffic could further damage it at any time - and road safety is most definitely an issue. Something will have to be done soon!
When you look at the route of the A415 as it crosses the river you realise that it appears to be heading for a crossing 200 yards to the west of New Bridge but then both sides swerve east on a new alignment for New Bridge. Was there an old ford there? ]