I originally said that this was "the Site of Ridge's Weir, otherwise Langley's, Cock's, Rudge's, Butler's."
However Julie Godson in her book "The Water Gypsy" has identified Noah's Ark Island and weir, below Northmoor Lock as the Rudge's weir in her story and so I have moved the details I have to that page.
Nothing much now remains of this weir and only the footbridge marks the site. 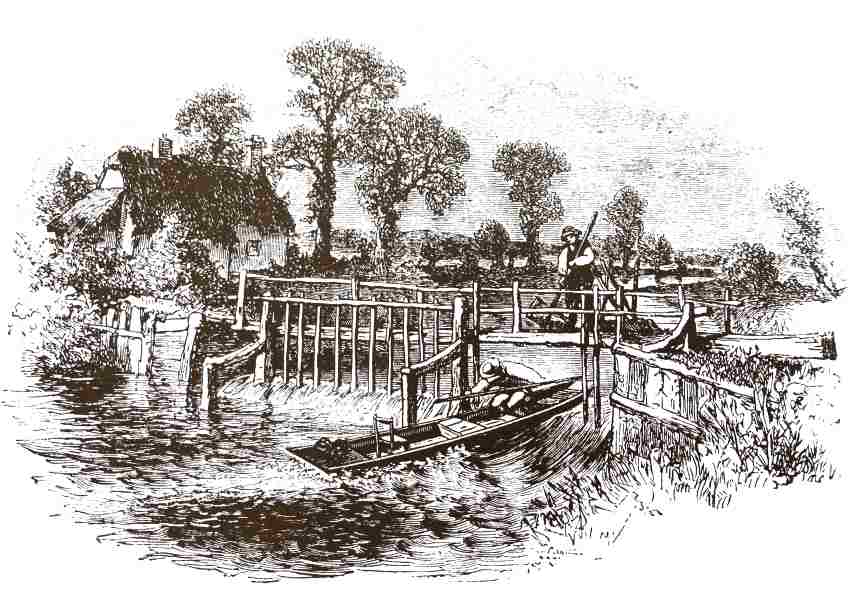 To visit one of these weirs — Hart's weir — we must ask the reader's company before we proceed farther on our route. In describing this, we shall make him sufficiently familiar with an object, to which it will be requisite frequently to direct his attention during his progress. Sometimes the weir is associated with the lock; but, generally, far up the river, where the stream is neither broad nor deep, the weir stands alone. We shall have occasion hereafter to picture them in comhination. The weirs are artificial dams, or banks, carried across the river in order to pen up the water to a certain height, for the services of the mill, the fishery, and the navigation. A large range of framework rises from the bed of the river; this supports a number of flood-gates sliding in grooves, and connected with a sill in the bottom. 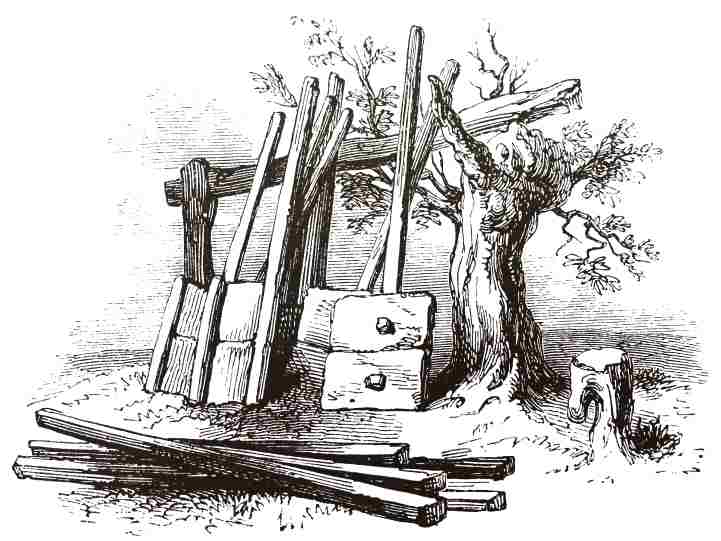 Our engraving represents a group of these flood-gates as they were drawn upon land, and resting against the support rudely constructed for them beside Hart's weir.
They are thus used: —
The square piles in the foreground are first struck at regular distances in the sill under water: between each of these one of the gates is placed by means of the pole attached to it — the boards completely stopping the space, and forming a dam across the river.
Two forms of dams are used: one with the board full upon the centre of the piles, and secured to them by strong plugs, over which the boat-hook is sometimes passed to aid lifting; the other has the water-board on one side, with a groove attached to it. Both of these are shown in the cut, as well as the rude stay for the rope of a barge to pass through, and which is generally formed of the branch of a tree. Such are the usual accompaniments of a weir in the upper Thames. When these dams, or paddles, are drawn up, the whole body of the stream, being collected into a narrow space, rushes through with great rapidity, and gives a temporary depth to the shallows, or, by the power of the current, forces the barges over them. It is obvious that care is required to prepare the boat for the descent; for there is some danger to be encountered.
The weir is ever picturesque, for the water is always forcing its way through or over it — sometimes in a huge sheet, forming a striking cascade, at other times dribbling through with a not unpleasing melody.
As we have elsewhere observed, there is usually a cottage close beside the weir, for the accommodation of the weir-keeper; generally this is a public-house, pleasantly diversifying the scenery, and not the less so because often rugged and old. 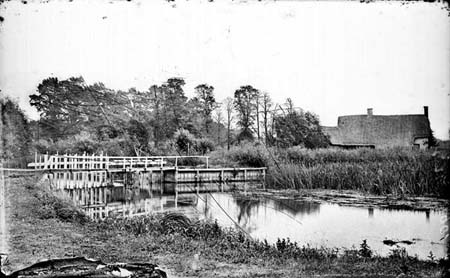 Above [Northmoor] lock is Ridge's footbridge, over the site of another dismantled weir; Ridge's or Langley or Cock's. From the crown of this bridge, which lies at the exact point at which the River ascends northward for its long sweep round by Oxford and southward again to Abingdon, you may behold a true vision of the soul of remote Thames landscape. Across the Oxfordshire meadows lie the grey roofs and barns of tiny Moorton; and hence if you choose, is the nearest way from the River to Fyfield; across Appleton Lower Common, desolate under a bleak August sky the day I was there, then over a little ridge and through the hamlet of Netherton. 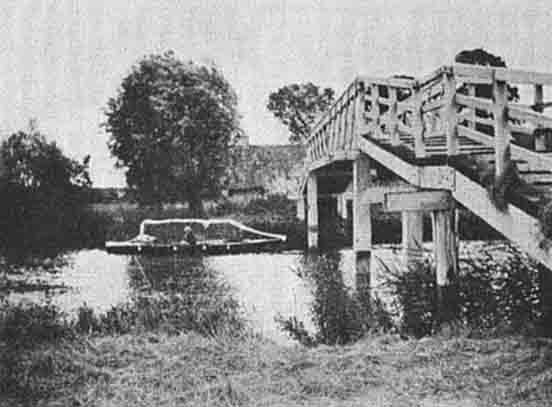 It is now a very picturesque scene.  Close by, on the Left bank,
[just discernible in the 1910 photograph above, between the willows and the tall reeds]
is an ancient thatched house of some size, which may have been the weir keeper's.  The bridge crosses at the exact point at which the river ascends northwards for its long sweep round by Oxford and thence southward to Abingdon:  only six miles away as the crow flies, although some twenty-four by water. 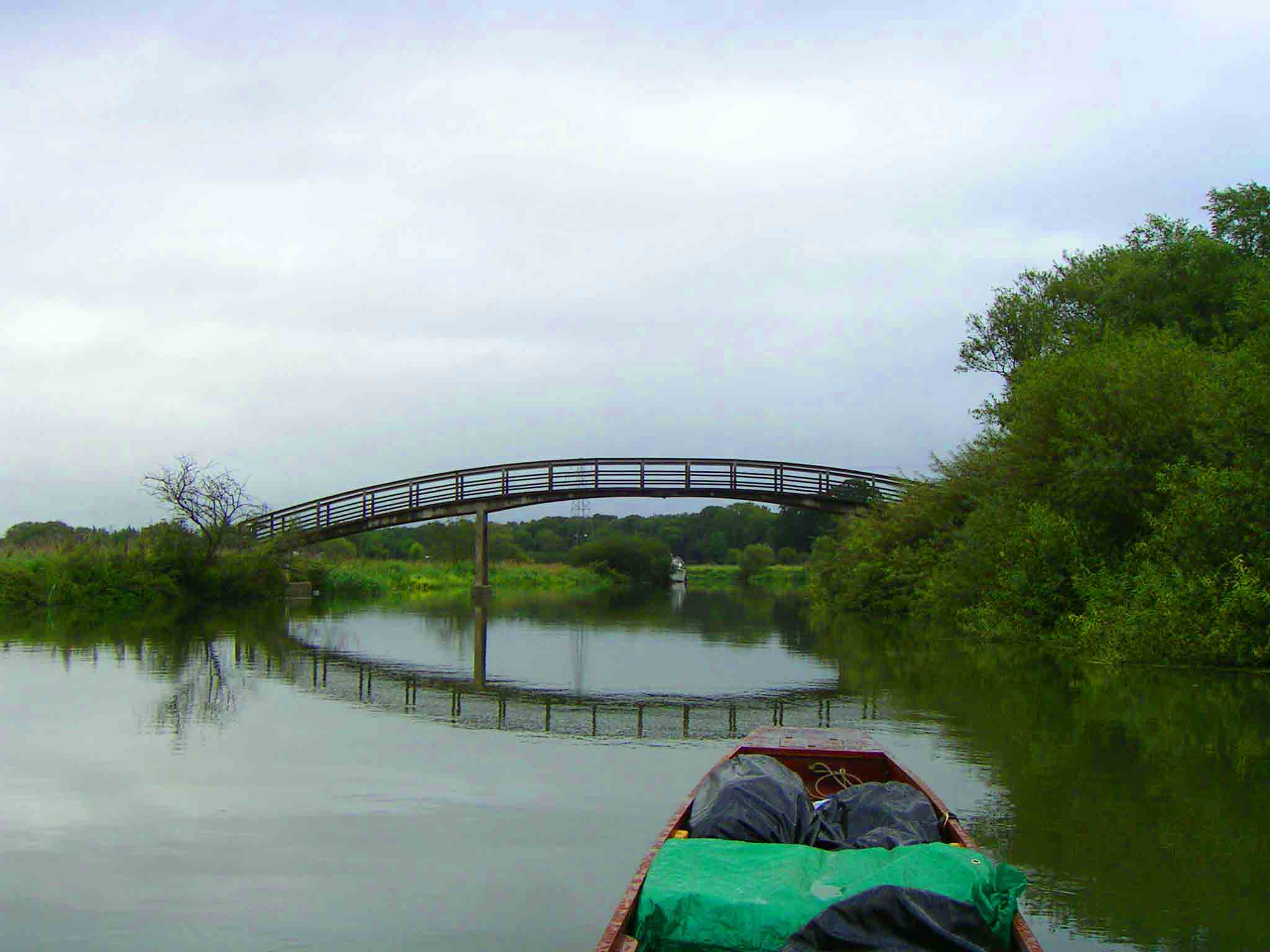 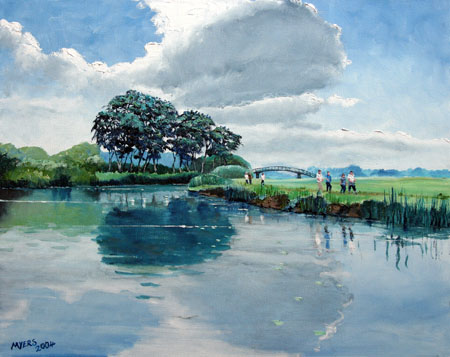