The weir at Northmoor Lock, near Farmoor, is set to continue operating as a full-span paddle and rymer weir after the Environment Agency (EA) agreed to upgrade materials.
It means lock keepers can still use the manual skills that have been used there for years rather than just press a button. Paddle and rymer weirs are operated by placing large wooden posts – the rymers – into the bottom of the river. To control the water flow, paddles of different heights are placed against the rymers.
The EA made a u-turn and instead upgraded the equipment three months ago, using lighter and more durable fibreglass paddles and rymers. It said it is now safer and easier to operate.


The Northmoor Paddle and Rymer Weir in 2011

Paddle and Rymer weirs pre-dated locks - and were designed so that boats could negotiate the weir itself. Northmoor of course has a lock so how to manage a paddle and rymer weir is included solely for interest.
1883: Boys Own Paper - The Thames: from Oxford to its source, by Paul Blake -

Let us take this opportunity of describing an Upper Thames weir, and how to get through it. It is an institution unknown below Oxford except in conjunction with a lock, but in the parts we are exploring a weir often exists by itself. It forms a breakwater right across the stream.
There is a bridge running along the top, on which you must take your stand; then one by one you must pull up the paddles which run between the rymers. These rymers are fixed at regular intervals in the sill, which is under water; they too must be removed. You then find you have a clear space through which to pass your boat.
Two men should stay in the boat; one should take the towing-line and mount the bridge, pulling the boat gently towards him, those on board taking care to keep it off the sides. The stream runs swiftly through the opening, so sometimes considerable care is required. When the boat is half way through, the tow-rope is passed to the man on the bank, who pulls the head gently round, whilst those in the boat keep her clear. Do not ever attempt to pull the boat completely through from the bank or it is sure to stick against the side beams.
With care and a little practice there is no great difficulty in negotiating a weir, though sometimes the rymers give some trouble, the weight of the water keeping them tight in their places. Give them a push upstream before attempting to raise them.
In coming down the work is easier, as the boat goes with instead of against the stream, but great care must be taken to keep the boat clear. Another danger is that unless you bend low your head may strike the bridge. Which may damage the structure, as Budd remarked.

Note the spelling of 'rymer' (not 'rhymer')

1909: Northmoor Lock in The Stripling Thames by Fred Thacker 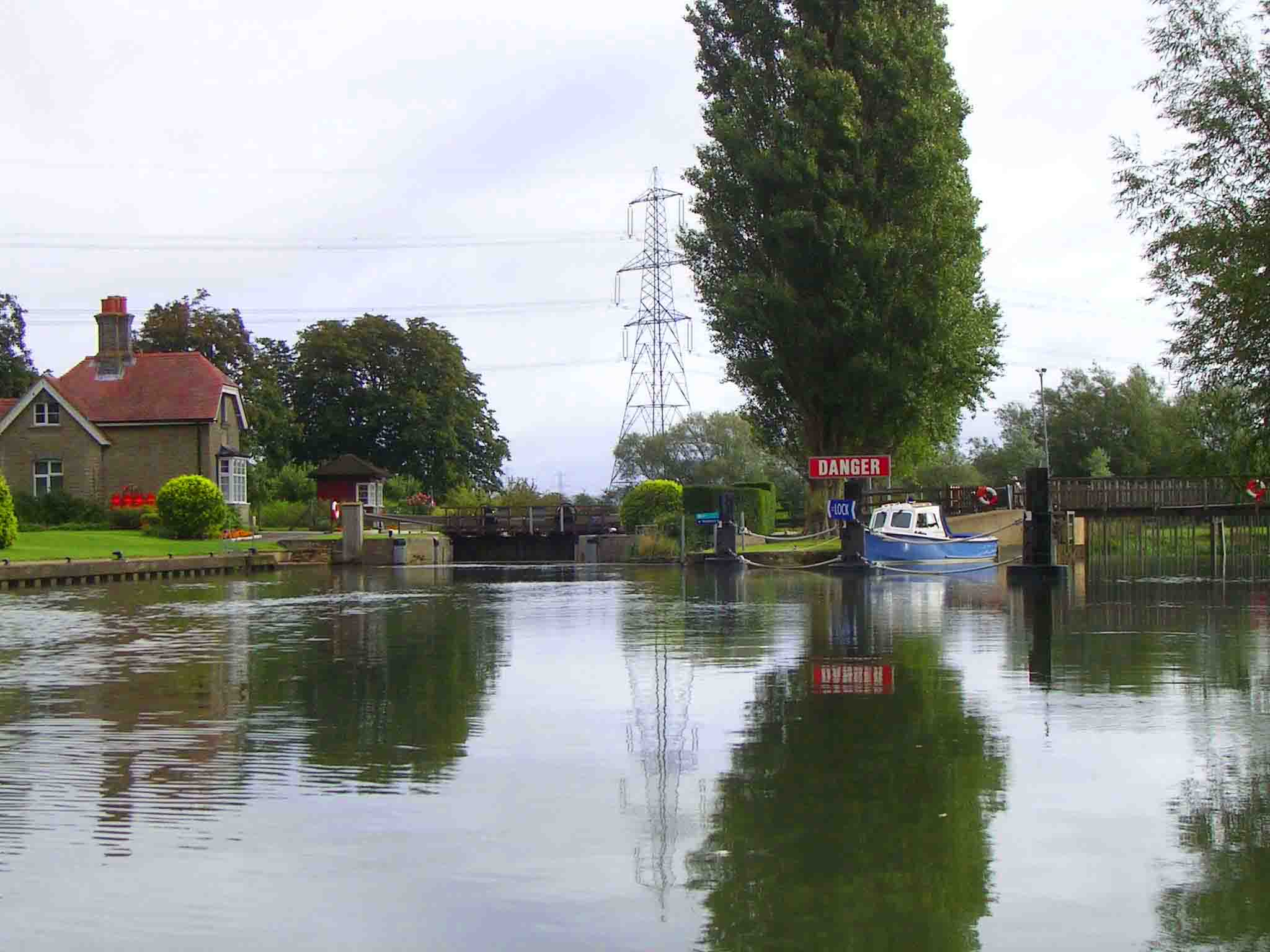 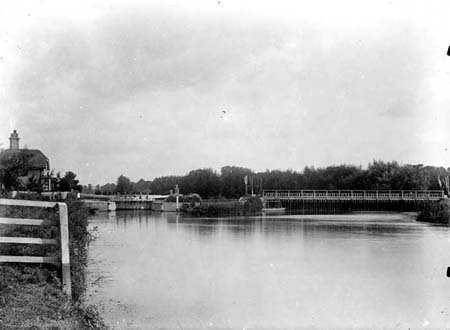 Several bridges needed to continue the towing path through the pleasure-ground and garden belonging to the house.  The horses go at present full three quarters of a mile round about; and it is a very great hindrance to upward boats. 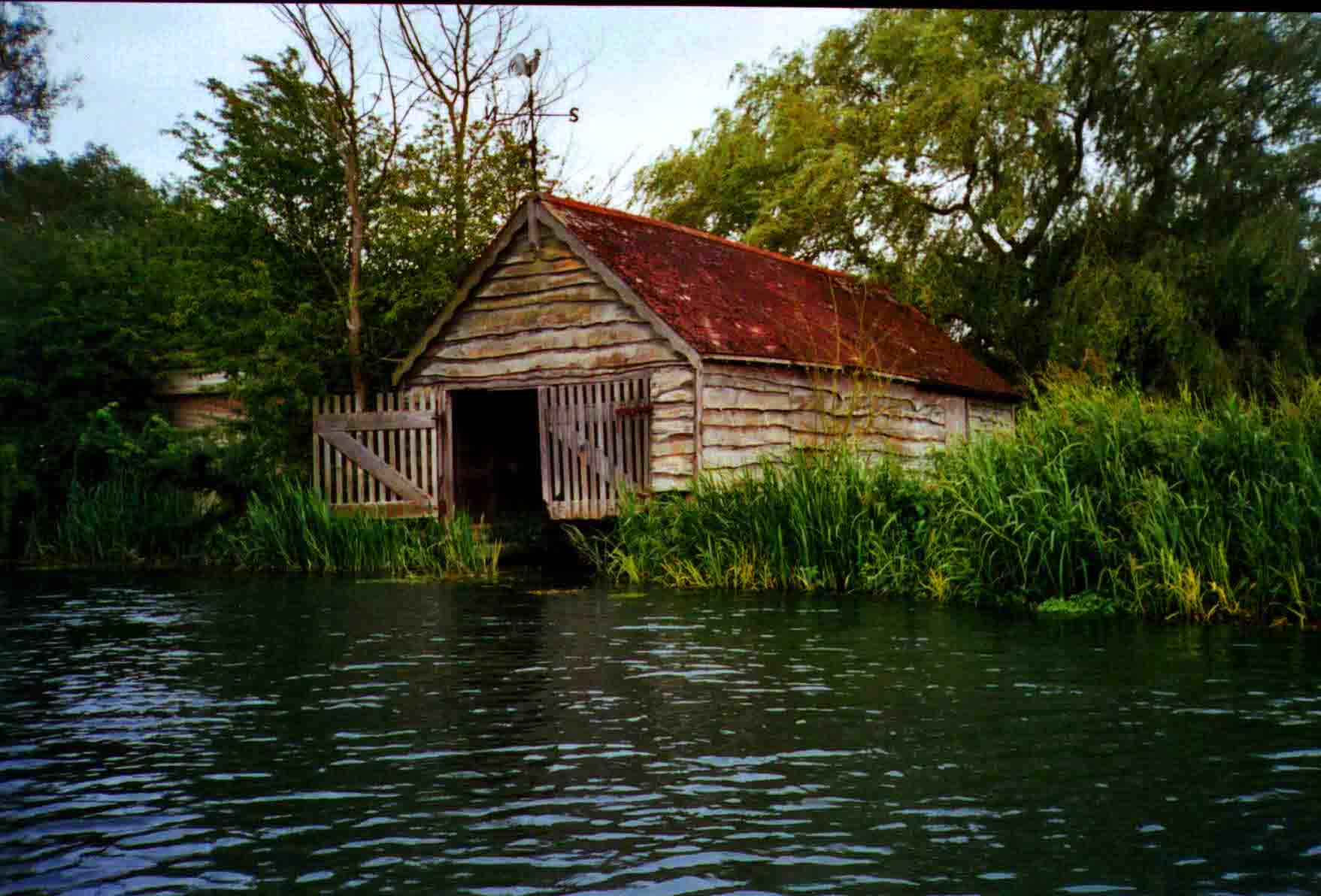 The old boathouse of which I have kind memories. In 1999 when I was passing on my Lechlade to Teddington trip there was a cloudburst - and my punt just fitted inside that boathouse and hardly a drop touched me.  The river was covered in miniature fountains as the enormous drops rained down. The wind roared and threatened the roof.  But it held on and so did I.
And then the storm was gone and the air fresh and bright and the trees held so much water on the leaves that punting became quite a problem - one touch on a branch and I was soaked!

I cannot easily tell you wherein the fascination lies, but for me all that Cotswold valley of the Thames above Oxford holds a perpetual and abiding charm.
There is nothing striking about it.
It is just a willowy landscape of meadows and copses and the Thames running through it between banks of reeds and water-flowers.
But the sun shines and the wind blows in the willows and turns them to silver;  and in the spring the copses are full of primroses, and if you stand up in your canoe as you float down you will see the dikes golden with marsh-marigolds and all the meadows scattered with oases of cowslips;  and the mornings are full of larks and the evenings of the chimes of village bells, and cuckoos call all day, and in the weaning-time the air is plaintive with the bleating of sheep and lambs in bass and treble and the whole valley is England in excelsis.
And that is all I can say about it, and if it does not appeal to you I cannot help it.