The right bank for 500m below the lock is an island

The right bank in the lock

The left bank in the lock

Eynsham to Pinkhill, Eynsham to King's, Environment Agency 'Out and About' Guide

Eynsham Weir in The Stripling Thames by Fred Thacker

Yarnton Tower and Cassington spire alternately hide and reappear amongst the trees all along this reach, which right up to Eynsham is very sweet to the memory, bordering as it does the northern slopes of Wytham Hill ...
For the hill gradually closes in upon the river, composing a lovely scene of flowing water, of wooded hill and grassland. The stream demands its full share of attention here, flowing swift and clear along its gravel bed, where not so deep down you may see the darting fish and the undulating weed.
Suddenly the course bends and widens out, and here is the cause of the swift sweet water; here is the glad open weir of Eynsham, once called Bolde's and Swithin's, the sight of which "doeth good like a medicine". Here all day is the music of caressing winds and tumbling waters; here swimmers plunge into the eddying pool - off the centre pier if you've the heart! Bracing the spot is, at more than two hundred feet above the sea; and all round the hill-born breath from off the Cotswolds refreshes hearts long "scrumped for air" within four walls.
When you have pulled over the rollers ...

And where the Eynsham weir-fall breaks out in rainbow spray
The Evenlode comes singing to join the pretty play. 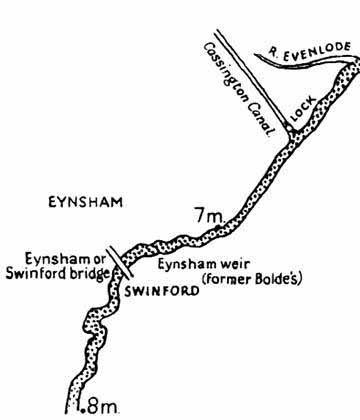 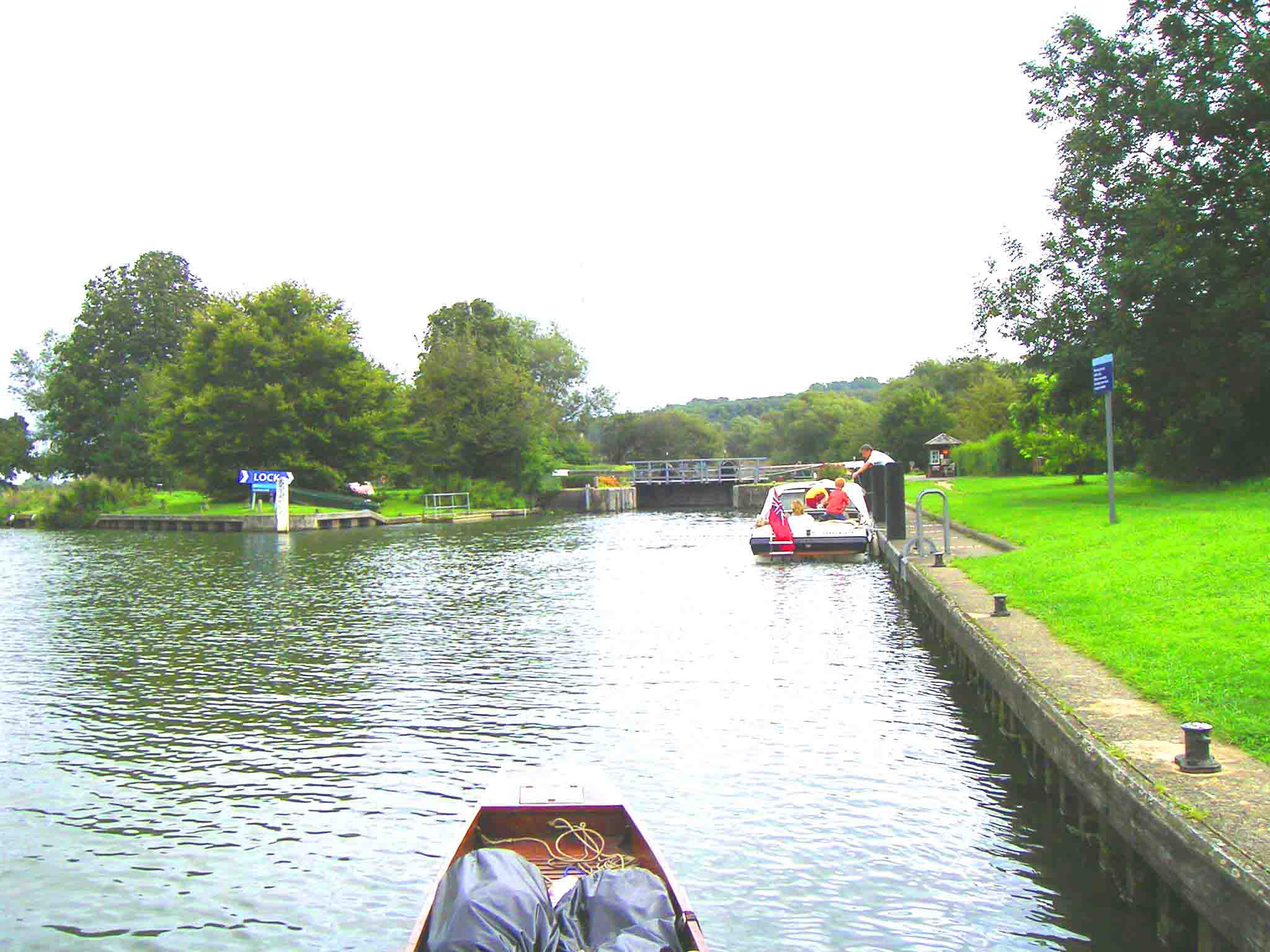 1791:  Eynsham Weir (Bolde's Weir) owned by Lord Abingdon.
1795:  Does not pen any water nor has for some years past.
1802:  Mylne: By our boat going thro' the weir eight inches was lost to the upper water.
[ Mylne is arguing for the superiority of Pound Locks over flash weirs.  All the river above the weir lost eight inches through the weir being opened to let the boat shoot it.]

Immediately below Ensham Bridge we made the somewhat dangerous passage of the weir, close to which, on the north side, is the site of "The Burnt Tree", dear to Oxford citizens as the scene of many a merry picnic. This tree was struck by lightning, and formed for many years a very picturesque object, and an excellent excuse for making a pleasant water excursion. We soon arrive at Canott's Ham, on the north side, into which many a pheasant strays from the neighbouring wood, and where in winter the snipe and wild duck abound. It is also noticeable as one of the few places on the river where the tench is to be found. 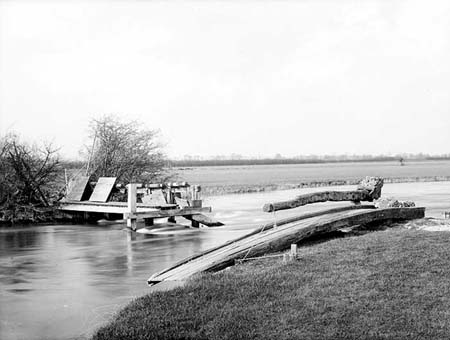 the picturesque materials of the weir are stored when not in use, and the rymers are piled in a stack close to the spot where they sometimes even now do effective service. Your boat passes through, however, generally without let or hindrance. 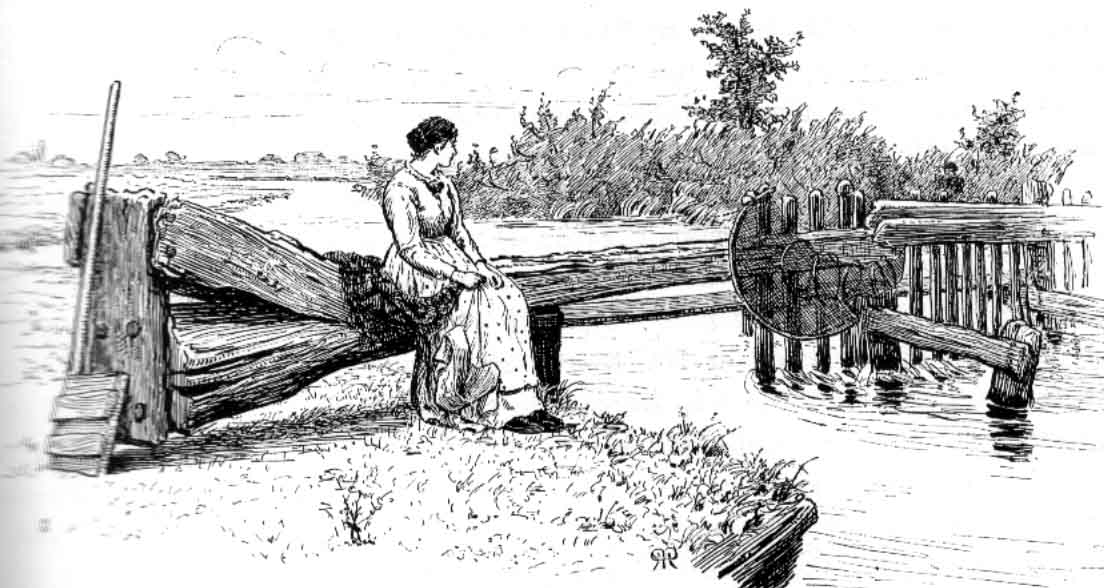 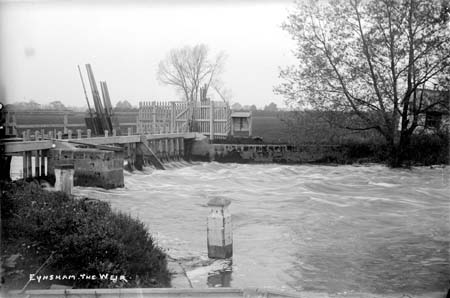 Eynsham Weir: Falls 1ft 6ins.  Take up paddles and then the rymers that hold them.  The weir is usually open.

Immediately below Ensham Bridge a picturesque weir purls and eddies to the cadence of its murmurous cascade. There is no sound on the river more delicious or more refreshing than the plash and drip of a weir when the stream is full.

The project involved extracting water from the Thames just upstream from the toll-bridge to be screened (removal of coarse matter) and then to a 'raw' water chamber in the basement of the engine house.
From there it was lifted by low level pumps to be mixed with a tiny amount of a solution of aluminium sulphate which would aid the coagulation, precipitation and filtration processes and thence to the precipitation tanks where a complicated system of baffles retarded the flow in order to deposit the bulk of the impurities on the bottom of the tanks.
The top water was then drawn off to the filters - consisting of carefully graded layers of filtering media, mainly quartz sand - in the next building. This pure water was then returned to an upper chamber in the engine house to be chlorinated and now "pure and wholesome" pumped through a 22" rising main to the Beacon Hill Service Reservoir.
The various buildings at Swinford are extremely handsome as can be seen in photographs in a 1934 booklet. They were grouped symmetrically on an east - west axis and built with sand-faced bricks of a rich brown shade with reconstructed Clipsham stone dressings. Handmade flat tiles were chosen for the roof.
Within 20 years or so plans were being drawn up for a major new project at Farmoor, and in 1962 the first civil engineering contracts were placed for the reservoir complex there, to be inaugurated on 29 September 1977.
What effect did this have on the Swinford plant? Firstly the river water was now not to be extracted near the toll-bridge directly to Swinford but from Pinkhill and into the Farmoor reservoir. Some of this dirty water is then fed to Swinford for treatment. Additional water is purified at Farmoor and transferred via a separate pipe to Swinford - all to be pumped to Beacon Hill for onward distribution.
In 2004 additional works at Swinford largely involved the installation of more modern purification systems than those available in the 1930s.