The Medley Weir site is by "Weir Cottage"

Street view under the bridge is the remains of Medley Weir
Street view of Weir Cottage, the site of the weir

1909: Fiddler's Island and Medley Weir in The Stripling Thames by Fred Thacker in 1909

And now the banks finally clear themselves from the dwellings, and become breezy and open. It is sweet here in June with buttercups and the flower of the grass, with yellow iris and great clumps of shapely, upstanding dock. Beyond the raised towpath Fiddler's Island Stream saunters leisurely down, forming the boundary of allotment gardens and of the northwestern skirts of the city. Two miles from Folly Bridge lies the broad cheery expanse of Medley weir, where you go over the rollers by the side of the waters that rarely do more than whisper as they fall.

Where swarms of minnows show their little heads,
Staying their wavy bodies 'gainst the streams.
To taste the luxury of sunny beams
Tempered with coolness. How they ever wrestle
With their own sweet delight, and ever nestle
Their silvery bellies on the pebbly sand.
If ye but scantily hold out the hand,
That very instant not one will remain;
But turn your eye, and they are there again. 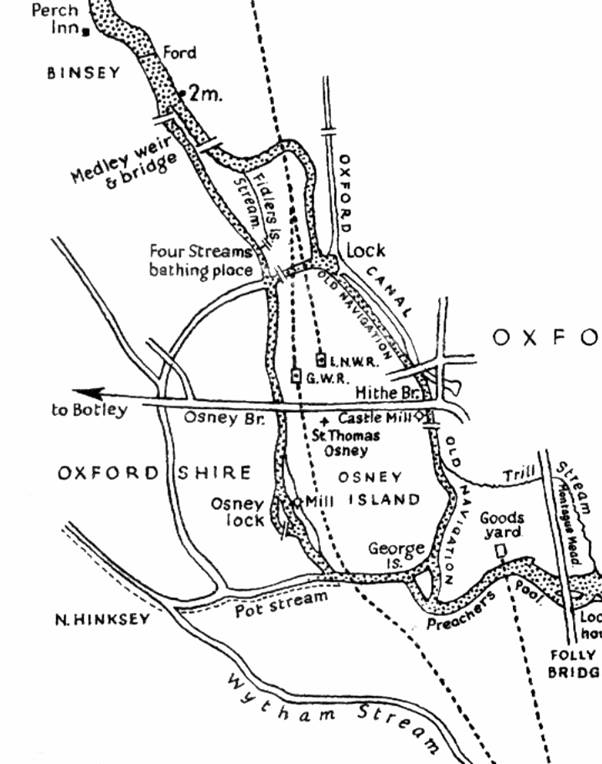 About one hundred yards downstream of Medley Footbridge. At Medley the stream divides -
on the LEFT bank is the Osney stream now the main navigation route thought to have been dug by the monks of Osney;
on the RIGHT bank was the old navigation route which went via what is now Isis Lock and through to Castle Mills

Below the weir the River divides into three streams, of which the westernmost is the modern navigation, the middle is Fiddler's Island Stream, and the easternmost the old Saxon route, traversing the city by way of Fisher Row and the Hythe Bridge.

It is agreed that a locke be made for the better kepinge of the waters to the mylls, & to amende the banks by Rewlye wheare hit shalbe requisite.

Fred Thatcher says this flashlock was doubtless Medley, which is in the right position, at the divergence of the two streams to Rewley and to Osney; and in Aga's map of 1578 Rois Leie Lock is marked exactly where Medley Weir now stands.
1793: A small pound lock was ordered for the benefit of the pleasure traffic by the side of the flash lock now erecting near Midley. [It was never built]
1798: A single pair of gates is shown on a plan.

Having passed through Godstow Lock, Oxford City comes in sight; the village of Wolvercot is passed, but that of Binsey claims a moment's thought. The voyager will pause at Binsey [Medley] weir, for here a charming view is obtained of ancient and venerable Oxford - its pinnacles, and towers, and church spires rising proudly above surrounding domiciles. Nowhere do we obtain a more striking view, and here especially do we recall the expressive lines of the poet: -

Like a rich gem, in circling gold enshrined,
Where Isis' waters wind
Along the sweetest shore
That ever felt fair culture's hands,
Or spring's embroidered mantle wore
Lo! where majestic Oxford stands.

1875: This Taunt photo is of Medley Weir. Unfortunately in the archive it is printed from the wrong side (left and right reversed). This probably also accounts for the doubt in its identification. I have shown it as I think it should be. See the Taunt 1911 photo below. -

it is intended to remove Medley Weir, which forms a great impediment, and has doubtless contributed to the wretched state of the river above it.

At Medley is the last of the weirs unaccompanied by locks.

1893: Ravenstein, The Oarsman's and Angler's map

Medley Weir: Falls 1 ft. Take up paddles and then the rymers that hold them.

... [from Godstow] it is but a short cruise and an easy one by the side of Port Meadow to the waterman's barges opposite Binsey, where all wise people will land and betake themselves to Oxford.

Two miles from Folly Bridge lies the broad cheery expanse of Medley Weir, where you go over the rollers by the side of the waters that rarely do more than whisper as they fall.
...
A black spaniel swam across the ripples that danced and sparkled in the June sunshine; and never surely did a shoal of minnows more enjoy life than that radiant afternoon. In the tiny arch of water that fell its inch or two over the weir they darted and gambolled, leaping high into the air for very fun apparently, and exhilaration. Hundred of little lives there seemed, flashing silver grey and olive green in the whispering water, and thudding harmlessly against the wooden weir beam in their excitement; a veritable minnow ladder; and a joy to remember!

In Henry Taunt's photograph, to the left of the lefthand weir is a landing stage and then a pair of railings which surround a boat rollers. Over the left hand weir can be seen Medley Footbridge. The right hand weir is on the Old Navigation. If you look at the Old Navigation section you can see these two footbridges, the main one with the vestigial weir still in place. 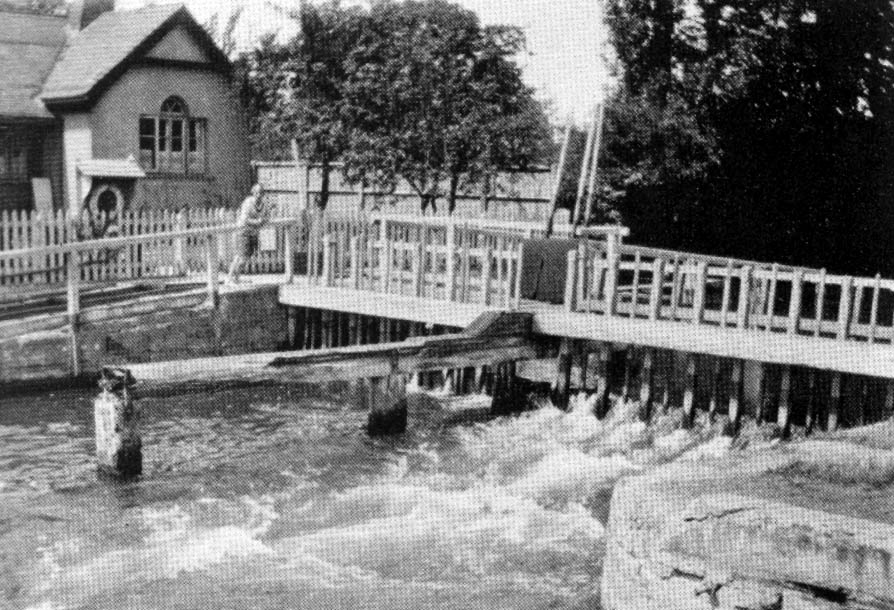 You can see that the main weir is in two parts:
on the left above, next to the boat rollers, a fixed section;
on the right a removable section which comprised a horizontal beam that could be swung aside.
When the beam is in position rymers, squared vertical timbers, were inserted at intervals into sockets in the heavy wooden timber underwater, which is the sill of the weir, and then paddles with long handles are placed against the rymers to do the actual work of holding back the water. Three unused paddles can be seen propped centrally between the sections.

And then here is the same weir open, the paddles and rymers removed and the beam swung aside. A launch is coming down, shooting the weir. 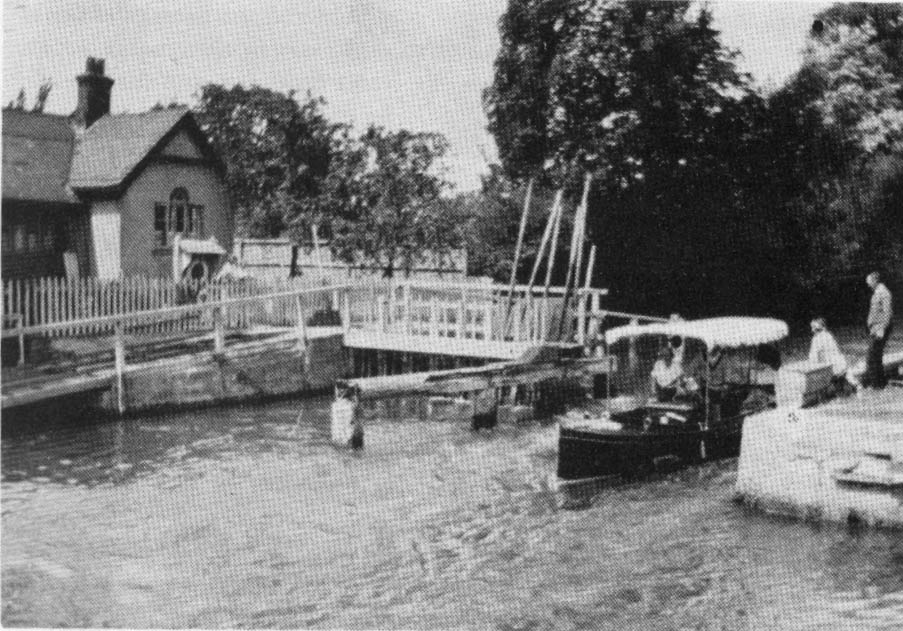 This former weir may shed further light on the uniquely Oxford tradition of punting stern first. This weir was here until the 1930s and punters would have needed to negotiate it. It did not always have rollers and certainly in Victorian times punts negotiated weirs without rollers.
When I first launched my punt (which is kept on a trailer) I launched bow first at too steep an angle and scooped up an inch or so of water. The same experience may come to other punters if they let their punts run uncontrolled down off the rollers on the Cherwell. To avoid the problem I always keep my punt on the trailer so that I can launch till, or deck, first. The till can go under water several inches before any water could pour into the punt.
The same may have applied to shooting a weir. It was simply shot through going downstream and presumably one unloaded passengers and hauled through upstream.
In both cases it would have been wise for a punt to go stern (i.e. till, platform, deck) first. (i.e. Oxford style)
Thames style punters (bow first standing down in front of the till) would never have faced this problem below Oxford in the punting era.
Cambridge punters never had the problem.

This next print is of Hart's weir not unlike Medley Weir. Notice the punt is till first (Oxford style). 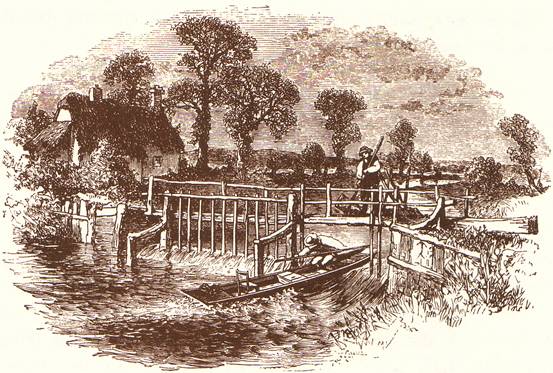 Punt shooting Hart's Weir, not unlike the former Medley Weir.

1880: An account of how to manage a paddle and rymer weir (actually Hart's Weir, shown above) -

Let us take this opportunity of describing an Upper Thames weir, and how to get through it. It is an institution unknown below Oxford except in conjunction with a lock, but in the parts we are exploring a weir often exists by itself.
It forms a breakwater right across the stream. There is a bridge running along the top, on which you must take your stand; then one by one you must pull up the paddles which run between the rymers. These rymers are fixed at regular intervals in the sill, which is under water; they too must be removed. You then find you have a clear space through which to pass your boat.
Two men should stay in the boat; one should take the towing-line and mount the bridge, pulling the boat gently towards him, those on board taking care to keep it off the sides. The stream runs swiftly through the opening, so sometimes considerable care is required. When the boat is half way through, the tow-rope is passed to the man on the bank, who pulls the head gently round, whilst those in the boat keep her clear. Do not ever attempt to pull the boat completely through from the bank or it is sure to stick against the side beams.
With care and a little practice there is no great difficulty in negotiating a weir, though sometimes the rymers give some trouble, the weight of the water keeping them tight in their places. Give them a push upstream before attempting to raise them.
In coming down the work is easier, as the boat goes with instead of against the stream, but great care must be taken to keep the boat clear. Another danger is that unless you bend low your head may strike the bridge.

Note the spelling of 'rymer' (not 'rhymer')

Perhaps the finest view of Oxford city is obtained from Binsey Weir, just below Godstow Lock and Wolvercot. At this point its towers, spires, and ancient walls rise ahead like a misty conglomerate.

Meanwhile, living at Oxford, he had learned to know and love the Thames, and had explored the many streams that run in above and below Oxford. He and his brothers spent their holidays paddling up to Godstow and King's Weir and Eynsham and Bablock Hythe. A favourite pastime was to pull up two or three paddles of Medley Weir and then shoot it in a canoe.

Let him who would have memories seek our waters
Severn and Avon, Eden, Usk and Wye;
Our English Naiads, England's laughing daughters
Age shall not dim his vision till he die.
Still, in the firelight, he shall see them leaping;
See dappled sunlight on dark pools;
and hear Music of rapids and 'twixt wake and sleeping
The organ-thunder of the approaching weir.

... I had arranged to meet Nick - who lives at Weir Cottage on the banks of the Thames, which is about a quarter of a mile away from the village (just where the river divides - the [RIGHT bank] side being the Medley, while the [LEFT bank] side the so-called Isis).
...
Nick went on, 'There's some funny things happen along here. One day a rowing boat containing eight fellows and a cox, came along - I think it must have been Eights Week - and these lads were in a very merry mood: they had probably won whatever event it was; they were in black-and-white gear. Anyway they tied up their boat and wandered up to the Perch for a meal and a celebration.
Very much later, as I was switching my outside light on - which I always do at night because I'd had a break-in or two - the young men were just on their way back, rowing along, laughing and singing merrily - and they were absolutely starkers!'

This is the only reference to the RIGHT bank stream as the Medley and the LEFT as the Isis that I have found so far. 'The Medley' is not marked on any old maps that I can see. MagicMap shows it as "Castle Mill Stream" - which indeed it is.