The Thames Path - Oxford to Abingdon from FoxysIslandWalks

For the convenience of the barges a commodious wharf has been completed at the extremity of the town, beyond which the new cut, forming a short curve, joins the main river a short distance below Culham Bridge.

[ i.e. the new cut (which we now call the main river) rejoins the old river (the Swift Ditch) below the hidden Culham Bridge (over the Swift Ditch just above its exit into Culham Reach) ] 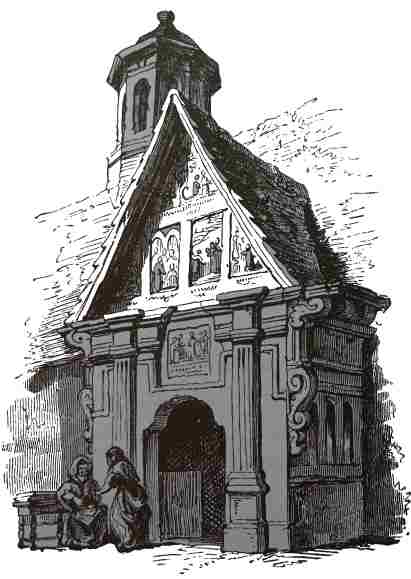 THE ALMSHOUSES AT ABINGDON

The old almshouses partially surround the churchyard of Abingdon. They are provided with a covered cloister, leading to each door. Our engraving exhibits the central entrance, with the cupola above the old hall. Over this gate are a series of old paintings, all allusive to works of charity; and in the hall are many curious portraits of benefactors, the principal being the youthful Edward VI. holding a charter with the great seal appended, by which the hospital was founded. There is also a painting of the building of the bridges over the Thames, which first gave Abingdon importance, as they occasioned the high road from Gloucester to London to be turned through this town. Burford Bridge was near the town, and Culham Bridge about half a mile to the east of it. Before they were erected, in 1416, the fords here were very dangerous, and the road turned to Wallingford to avoid them. The merchant Barbour, feeling the importance of these bridges to the town, gave one hundred marks toward them; and Leland says three hundred men were employed at once upon them at the rate of a penny per day; which Hearne the antiquary observes was "an extraordinary price in these times, when the best wheat was sold for twelvepence per quarter." Another curious picture of a local antiquity is painted on the exterior wall of the hospital, opposite the Thames: it is a view of the cross which formerly stood in the town, and was destroyed by Waller's army in May, 1644, in revenge for his repulse at Newbridge. 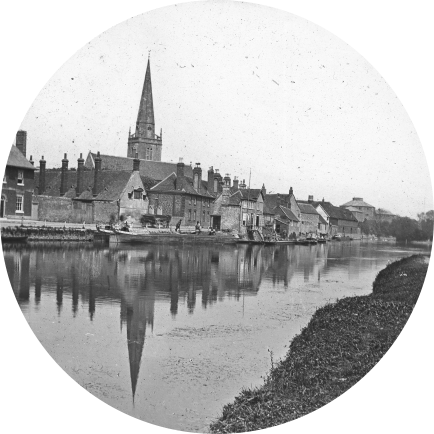 There are bits of old wall lining the bank on the town side, and ivy grows freely over them. Many of the houses stand back from the water; a part of the ruined abbey and the long range of the abbot's residence can be seen between masses of blossom. The great exterior chimney of the abbey buildings should particularly be noticed. The blossom at Abingdon is a great feature, and one not to be found everywhere. Horse-chestnuts and holm oaks dip their boughs in the water, and from the branches arises a perfect chorus of birds. Abingdon has its chimneys, of course, as well as hideous buildings suited to modern requirements of business, but in the general view these things are lost sight of.

At Abingdon, the river passes by the streets.  Abingdon is a typical country town of the smaller order - quiet, eminently respectable, clean, and desperately dull.  It prides itself on being old, but whether it can compare in this respect with Wallingford and Dorchester seems doubtful.  A famous abbey stood here once, and within what is left of its sanctified walls they brew bitter ale nowadays ...

As a headquarters for boating, for those who want to dawdle and explore odd corners and have no desire to rush through as many locks as possible in a day, Abingdon makes a good centre. It is within easy reach of the part lying below the woods at Nuneham, and in the other direction is the Sutton Courtney backwater.

But in the South perhaps the happiest loafing-ground is the gift of Father Thames; for there again the contrast of violent action, with its blisters, perspiration, and the like, throws into fine relief the bliss of "quietism".
I know one little village in the upper reaches where loafing may be pushed to high perfection. Here the early hours of the morning are vexed by the voices of boaters making their way down the little street to the river. The most of them go staggering under hampers, bundles of waterproofs, and so forth. Their voices are clamant of feats to be accomplished: they will row, they will punt, they will paddle, till they weary out the sun.
All this the Loafer hears through the open door of his cottage, where in his shirt-sleeves he is dallying with his bacon, as a gentleman should. He is the only one who has had a comfortable breakfast and he knows it.
Later he will issue forth and stroll down in their track to the bridge. The last of these Argonauts is pulling lustily forth; the river is dotted with evanishing blazers. Upon all these lunatics a pitiless Phoebus shines triumphant. The Loafer sees the last of them off the stage, turns his back on it, and seeks the shady side of the street.

[ I have no particular reason to ascribe the above to Abingdon - but it sounds about right. ]
Mind you The Royal River in 1885 has this to say (in the Abingdon section) -

Anytime from eight to ten in the morning - for oddly enough, boating-men are rarely up with the lark - camping-out parties may be seen engaged in the serious business of breakfast, or in the lighter but less exhilerating task of washing-up the cups and saucers, and generally "making tidy" before the day's leisurely pull.
As a rule, however, the river is deserted during the whole of the forenoon, even in the height of the season, as, indeed the towing-path always is, whether it be late or early - at least upon this portion of the stream. 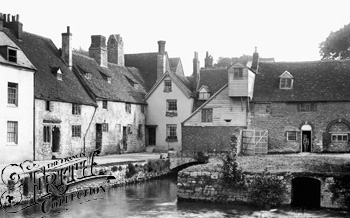 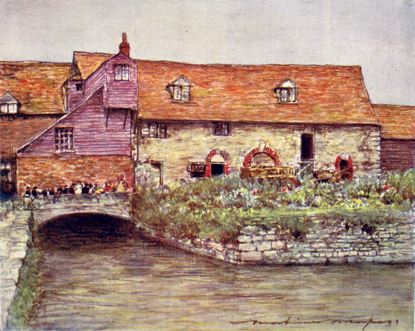 The Mill at Abingdon, Mortimer Menpes, 1906