The Sutton Flow Gauge is the second on the main river. The flow in Oxford will usually be slightly less than measured here.

At the downstream end of Culham Lock Cut the weir stream comes in under the old multi-arch Culham Bridge on the left bank(as you go upstream) That weir stream is navigable for small boats upstream for a few hundred yards. The RIGHT bank lock cut leads under Sutton Bridge to CULHAM LOCK. 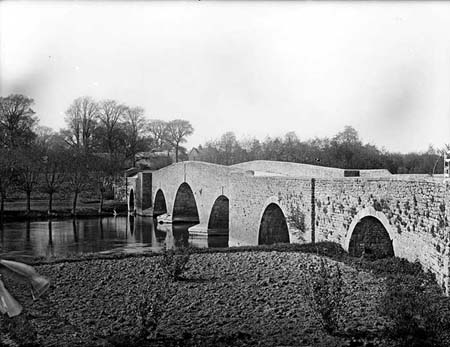 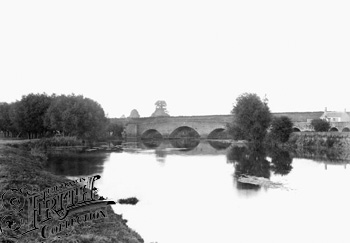 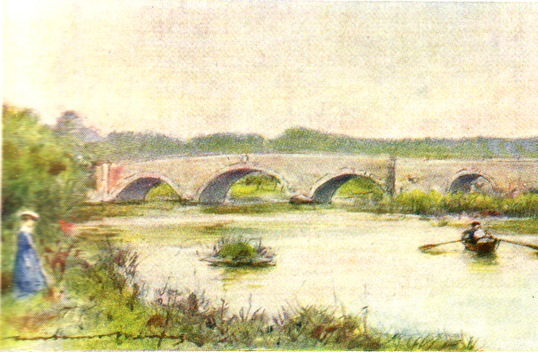 Sutton Bridge ... a toll bridge by the way, the existence of which as such is a great nuisance locally. In fact, not long since a County Council candidate stood successfully on the "free-bridge ticket", but the three years came and went and he stood no more, and the tolls go on as before. It takes more than three years to get rid of a time-honoured English grievance.

Sutton Bridge is a stone structure with three arches of medieval design over the main stream and two smaller ones spanning the overflow bed, all dating from 1807.
The extension built in 1809 across the Culham Cut follows the original design; this section has one arch only.
Tolls are payable at the toll-house on the Berkshire side. 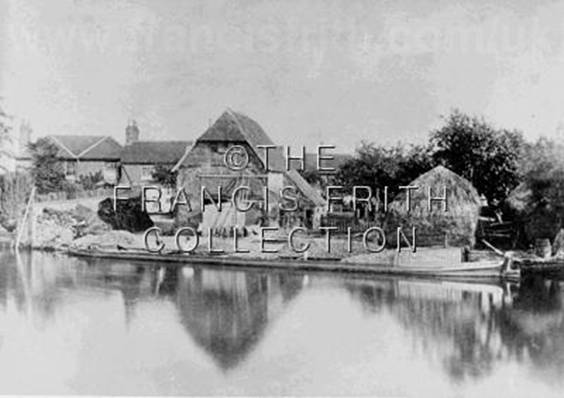 The Wharf was converted and became the home of Herbert Henry Asquith, prime minister 1908 - 1916, and later first Earl of Oxford and Asquith. 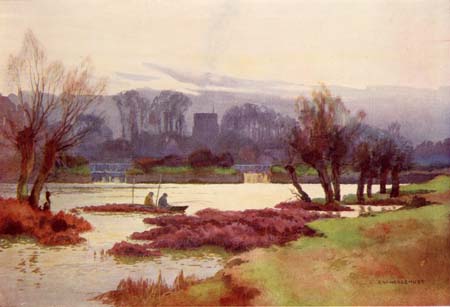 The navigation here is conducted by another cut, as at Clifton Lock, the river itself bending away to the left, underneath a fine old stone bridge.  Here, out of the track of steam-launches, the water, though rather shallow at first, is clear and bright, and the stream strong, but after passing a mill on the left hand, the stream slackens;  there is an assemblage of wild pools and islands, with three lashers on the further bank at a little distance from one another.
On the waters edge above the weir lies the village of Sutton Courtenay, well worth a visit if time permits.
The Mill is dated 1847.  Here they turn all sorts of old tarpaulins, tarred ropes, and rags into brown paper; the smell at times, when near it, is unpleasant, and I am sorry to say the miller, not content with the magnificent water power at his disposal, has erected a great ugly chimney, the smoke from which blackens and spoils this otherwise charming spot.
I had great difficulty in obtaining a bed at Sutton Courtenay, as the only inn of any pretensions was at the time of my visit being rebuilt;  the church also, which stands close to the inn, had its roof off, and seemed likely soon to have very little of its original self left.  I did at last find very nice snug lodgings at a Mrs. Hirsts on the green;  she was the widow of a former landlord of the Elephant, at Pangbourne, and made me very comfortable during my short stay.
The village is full of quaint old houses, straggling along for nearly a mile;  at one end of it a small brook flows into the river.  There are here the remains of an old manor house, formerly belonging to the monks of Abingdon;  it is called by the natives the Abbey.  There is at present a good gabled house built on the spot, with fine barns and an old picturesque gateway.  I heard owls hooting at night;  the whole place is highly suggestive of bygone times.  Sutton Courtenay seems a great place for old barns, and I could not help thinking how much my friend Mr. Boyce would like it.
If you propose to pay a visit to this place in a boat, the best plan is to come down to it from Abingdon, as there is no place to leave your boat below the weir, nearer than the lock.
I think if some of the many artists who devote their attention to Streatley, would try a pitch up at Sutton, they might amongst the pools, the old village and the meadows between the lock and the weir, find ample scope for some fresh subjects of river scenery.

[We] actually braved the current of a mill-race in order to explore a little back-water.
For one of the great charms of the Thames is the number of these "sedged tributaries", which wander far from the main stream through green pastures and between lines of willows and sweet flower hedges. Often their entrance is so overgrown with reeds and lilies you can scarcely find it, and the boats that pass beyond are few in number.
Sometimes the back-water flows to or from a mill, sometimes it is really the main river which is left by the boats for the cut to the lock.
But the most beautiful are those which seem to tire of running with the current, and turn from it to rest where lilies blow round long islands, or where cattle graze in quiet meadows.
As we worked slowly in and out of the willows, a man on shore glanced at us so hard, we knew he must own the water. And sure enough, as soon as we were within hearing, "This is private water", he yelled.
"Oh, thank you!" said Joseph, politely, "we shall know another time!". When you are master of the situation you can afford to be polite.
Of course the man who is proprietor of a river bank, and fancies the water also his property, looks upon all boating parties as trespassers. River travellers are apt to look upon him as a nuisance, and to tell him so, following the advice of the well known R.A.
The wonder is the entire Thames from London to Oxford is not placarded PRIVATE!

You need not mind the notice-boards about private waters &c., if you wish to explore this stream. These boards are generally put up at backwaters; but as long as the stream is navigable and no landing is attempted, the right of way cannot be disputed.

[ The law is that there is a right of way wherever Thames water flows. There is therefore a general right to navigate all weir streams - though of course this will not always be wise or even possible. "Navigate" includes stopping, anchoring for a reasonable time, but mooring is another question because there is not generally a right to land on private property. ]

The lock at Culham is one of the least interesting on the river, and of the hundreds who pass through it only a few know that they are close to the very prettiest backwater on the Thames, namely Sutton Pool. There is one backwater at Sutton Courtenay which can be reached from above Culham Lock. This leads to the mill, now disused, and runs along the top of the numerous weirs that pour into Sutton Pool itself. It is pretty also, and it is pleasant to see the meadows where the cows stand knee-deep in flowering plants, and the little square tower of the church peeping through the trees. This backwater is the best for landing to go to the village. Along the top of the weirs runs a path -a public right-of-way - which leads across the fields to Culham Lock, and anyone may land here and look down upon the pool; but to get right into it the lock must be passed, and some way further, after going under the bridge, we can turn the corner of a large island and retrace our way upstream until we come into the great pool, with its miniature bays and tumbling water. 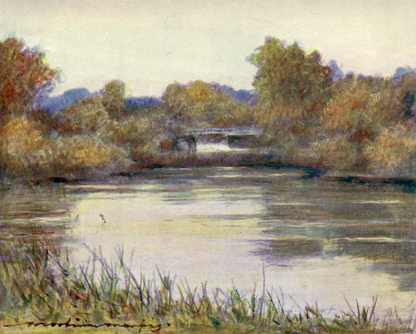 The weirs are high, and the streams come down with force, making a restless heave and swell when the river is full. The little tongues of land that divide one bay from another are shaded by willows, and the lush green grass grows here and there around tiny beaches of white sand. In spring, masses of hawthorn, all frosted with flowers, bend down from above, and the wild hyacinths break up between the blades of grass. Tall reeds form tiny islets, and perhaps a little moorhen flaps out. It is in secluded places like this that the dainty nest of the reed-warbler may be seen, swinging so lightly upon its supports that it is extraordinary to think that so large a bird as the cuckoo should dare to deposit its egg there. Yet reed-warblers and sedge-warblers are both among the cuckoo's victims. Unfortunately, in this little paradise landing is everywhere strictly forbidden, but no one can forbid enjoyment of the beauties which appeal to sight.
The village of Sutton Courtenay is certainly worth visiting. The village green, with its tall chestnuts, limes, and elms, is the very picture of what a green should be.

The Story of the Thames, J E Vincent -

The reach below the Lasher Pool is extremely pretty and winding, fringed by willows on left, thickly grown with alder and aspen and willow on the right.