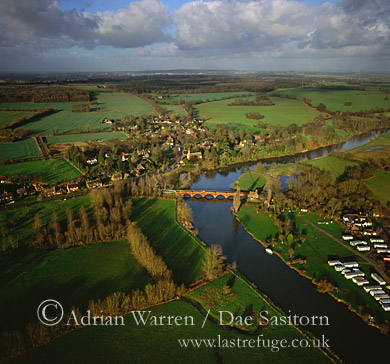 At Clifton there are rocks and sands and flats
Which made us wade and wet as rats;
The passage bare, the water often gone
And rocks smooth-worn, do pave it like freestone.

At Clifton Hampden, as if to make up for its dulness, the river suddenly comes out in a quite novel aspect.  For a short distance it runs over a bed of hard sandstone; the punting here is peculiar;  mud is a bad thing, but there is such a thing as too hard a bottom, for here the pole rings with a chunk as it strikes the ground, and slips aside without any hold.

[ And yes, around here there is a problem unique to punters.  The bottom is rock.  The pole bounces and feels as if it might shatter.  There is no grip and it becomes necessary to paddle with the pole.  I have only known this elsewhere on concreted sections of canals - particularly the Kennet and Avon between Bath and Bradford on Avon. ]

The water is clear, swift, shallow, and very pleasant to look down into.  Great slabs of sandstone are plainly visible, with long green streaming weeds across them.  This sandstone is only found for a very short distance.

The navigation here appeared to be particularly defective;  for, with all the advantages of the exertions that had been made by the Water-bailiff's directions, and the expense that had been incurred for the supply of water
[i.e paying millers upstream to open their weirs in order to raise the water level]
the country having been comparatively drained for several miles along the upper districts, - and though the City Barge and shallop, and the attendant boats, drew scarcely more than two feet of water, - they were detained at Clifton a considerable length of time.

[ The River is shallower here than in most places since the rock bottom cannot be dredged.  However I cannot help feeling that we must have much more water now than they had then - no matter how greedy the millers were or how leaky the weirs - it must surely all come down the river eventually.  There is a note elsewhere that in the late 1800s the weirs scarcely ran at all in summer time.]