957:  Fred Thacker in 1920 says that the Revd J.E.Field of Benson informs him that a charter of Sotwell in the year 957 refers to a track from the present site to Wittenham Wood as "Brycwege" [ i.e. Bridge Way ].  He comments that this may have referred to a long forgotten Roman Bridge at Days Lock or even to Wallingford Bridge.  But clearly one of these three must be able to claim the title of oldest known documented bridge (site) on the Thames

1301:  The Patent Rolls - the lease of a fishery downwards a ponte de Shillingford - [] from Shillingford Bridge ]
1378:  Shillingford Ferry granted to Robert Hurst.
1545: A little House called le Ferry House beside le ferry at Shellingforde in tenure of Roger Hacheman.
1692:  Baskervile -

1764: A timber bridge built on stone pillars.  Camden in noting that a ford preceeded this bridge, records the dredging up of piles and beams.  These might have been the remains of a previous bridge.
1776:  Reference to Shillingford bridge Lock.

THE light and elegant bridge of Shillingford, with the variety of carriages that are continually passing and repassing, aided by the gliding objects on the water beneath, greatly add to the natural beauty of the landscape. In this delightful retreat the skilful angler finds high gratification in his pursuit, and ample sources of contemplation.

Here blissful thoughts his mind engage,
To crowded, noisy scenes unknown
Waked by some bard's instructive page,
Or calm reflections all his own.

This sketch for a book illustration, done in 1897 by James Dredge, is based on the Samuel Ireland picture - 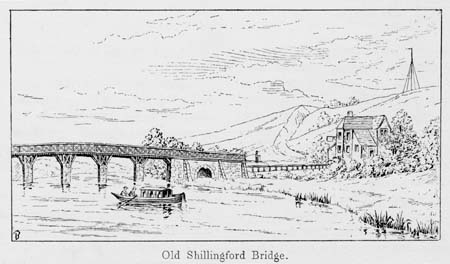 1826:  The bridge trustees advertised that on 10th May they would commence taking down the present wooden bridge in order to build one of stone, instead thereof.  A new and most commodious ferry boat was to be provided.

1826: Skrine 'A General Account of all Rivers of Note in Great Britain' -

Shillingford Bridge occupies a romantic situation, which strikes the eye more strongly, from being unlike the rest of the country, which bears an open and dreary aspect.

1827: Shillingford Bridge begun.
However I have found this somewhat imaginative painting by James Pollard entitled 'A mail coach in a flood near Shillingford Bridge, Berkshire' and ascribed to 1825. The date seems wrong and I am unable to identify (or even account for) the long bridge in the background.


An imaginative picture entitled "A mail coach in a flood near Shillingford Bridge, Berkshire", James Pollard, 1825? 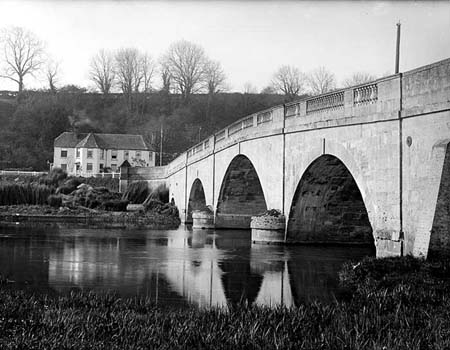 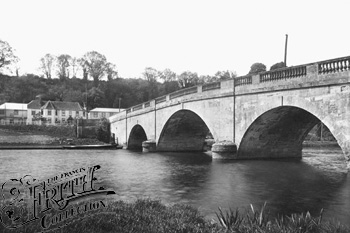 ... three graceful arches of stone, balustraded at the top too, looking almost startingly white against the dark background of the wooded hill beyond, that carries the road from Dorchester to Wallingford.
The bridge itself is not of great antiquity, for there are eighteenth century prints of one before it, but it is a distinct credit to its builder. 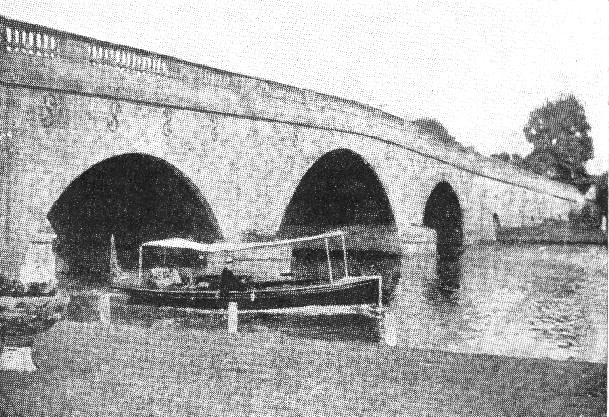 Shillingford Bridge on the site of an ancient bridge was begun in 1827, entirely of stone and of excellent design with stone balustrade. It consists of one large centre arch with two side-arches spanning the river, and it continues on the ramp across the flood-lands on the Oxfordshire side, pierced by three small arches to take flood-water. At the present time the balustrades are being renewed and will be completed by 1929.
The Shillingford Hotel axial with the bridge on the Berkshire side enhances the beauty of the bridge and its northern approach. The southern approach down Shillingford Hill is sufficiently indirect to enforce a check on the speed of motor-vehicles passing the hotel. 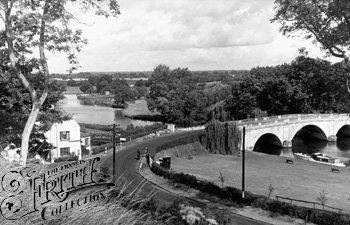