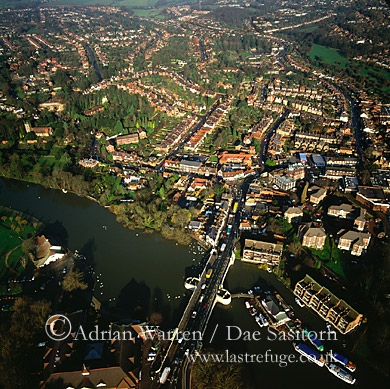 Caversham Ferry
1231:  The Close Rolls – “the chapel of St Anne on the bridge at Reading ultra Tamisiam, founded partly by the abbot of Reading and partly by William, Earl Marshall.
1231:  An oak was granted from Windsor Forest to build a boat for ferrying poor folk over  Caversham Water.
[ Perhaps they could not afford the bridge toll? ]
1480:  The people of Reading complain to Edward IV of the abbot’s negligence in repairing “a parte of Causham bridge with a chapel thereupon of the holy gost”.

A great mayne bridge of Tymbre over the Tamise, most upon foundation of Tymbre, and yn sum places stone … pilid in the Fundation for the rage of the Streame of the Tamise.

1538:  Dr London promised to send an item “by the first barge” to London.
1642:  Civil War – “For pulling up the bridge at Casom £1 9s. 7d.”
Charles I immediately sent an order to the Mayor - Causeham Bridge was to be made safe for the army to cross by eight o’clock next morning.
1644:  “fitt for carriages to pass over”.  A drawbridge was suggested.  A warrant arrived “from major-general Browne and others for a sufficient drawbridge”.
1747:  Mentioned by George Leslie as the date on a stone – so obviously at least there was some rebuilding then.

1792: Picturesque Views on the Thames by Samuel Ireland -

THE scenery towards Caversham, as we approach [from above] the bridge, is much confined, nothing presenting itself but a faint view of the old Abbey gate, at Reading : I have therefore selected the eastern view of the bridge [from downstream], as best adapted to illustrate the present pursuit, where the tower of the old church and part of the village appearing in the fore-ground, with the range of hills in the distance, give a tolerable idea of the country.
CAVERSHAM had formerly a small priory, which was a cell to the monastery at Nottely, in Buckinghamshire. 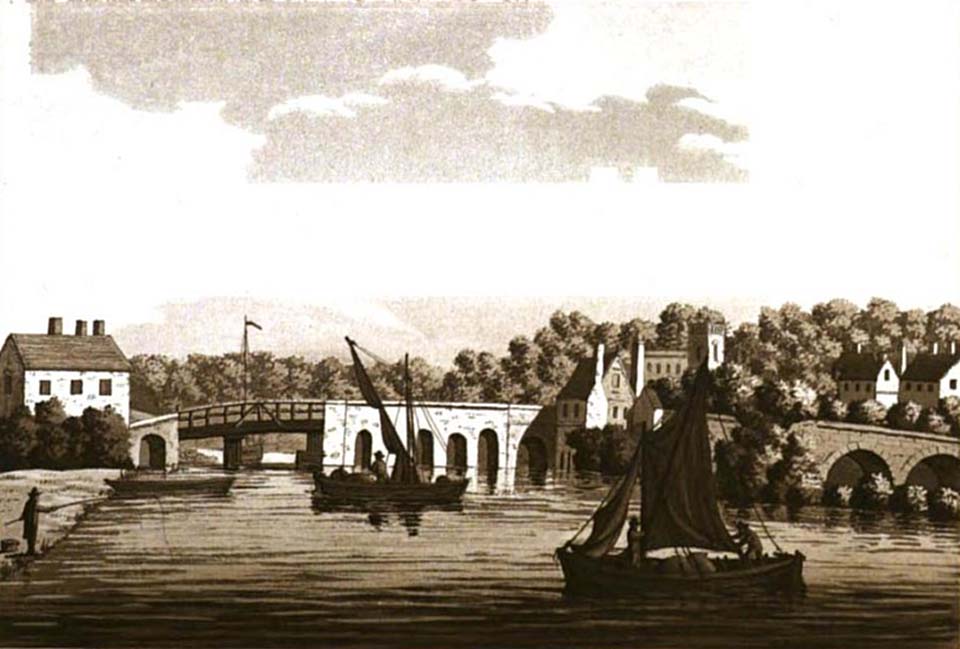 Caversham Bridge from downstream with St Peter's Church, Caversham, over to the right, Samuel Ireland, 1792

1793:  View of Reading from Caversham, Boydell 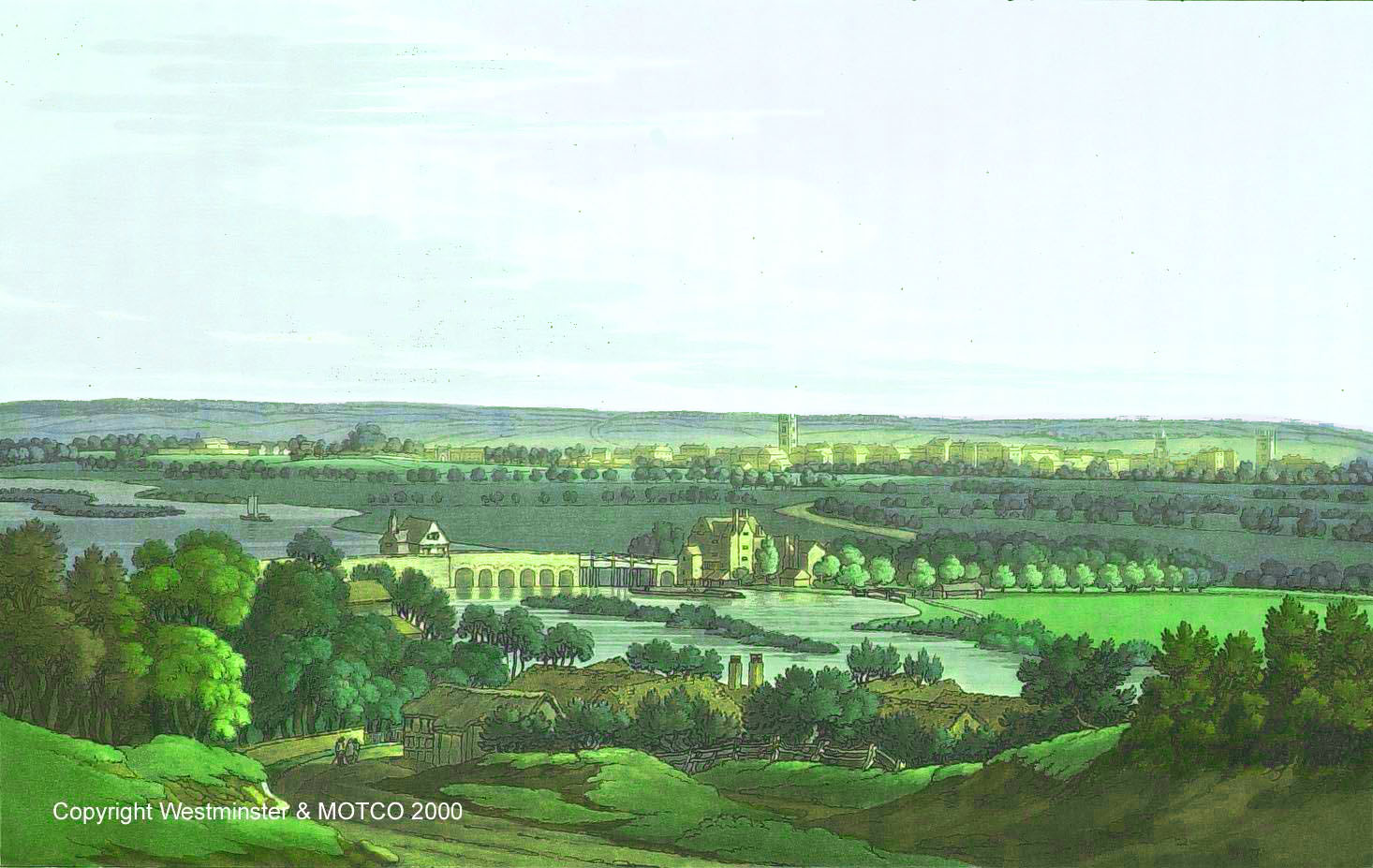 See below for Caversham Court which is in the foreground of this picture - some of those trees may still be alive ...
1793: Detail from Boydell print - 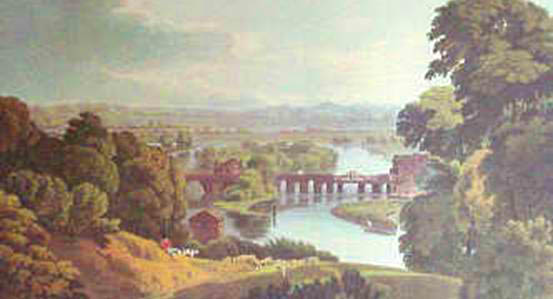 1812:  Some repairs were done following a fatality 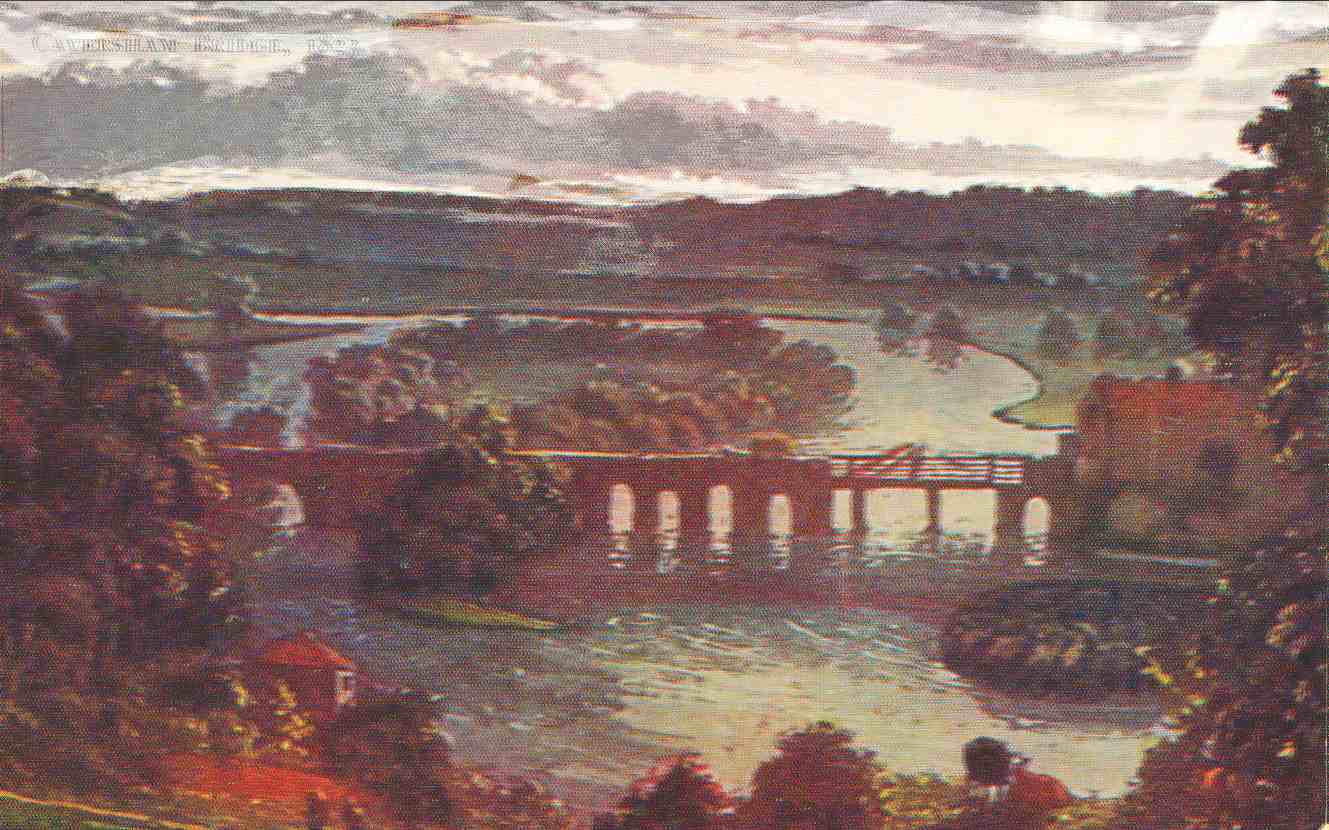 of wood and brick, of a singular construction and quite out of the common way in which bridges are usually built.

the Oxford half an old fashioned stone and brick structure;
the Berkshire half a sort of makeshift wood and iron skeleton. 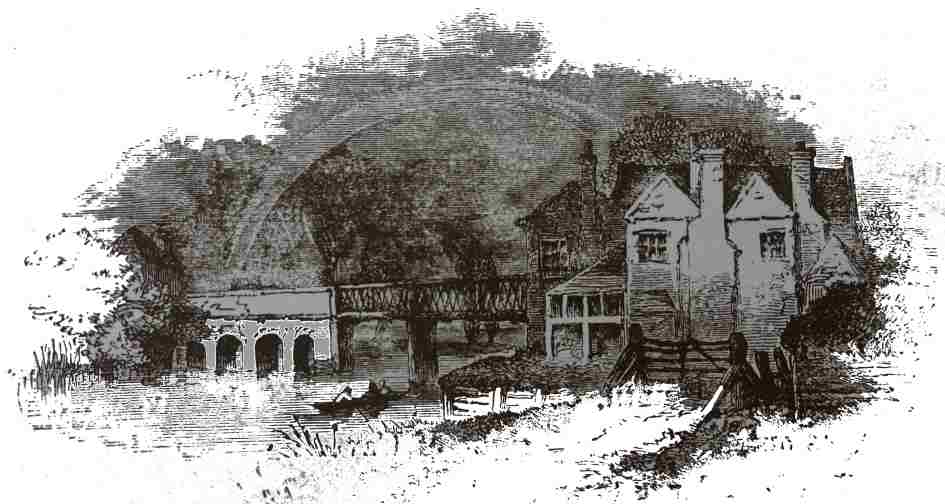 Caversham Bridge is an ugly structure, partly of wood and partly of stone. At its foot is a small cottage, where boats are hired, and where the curious may trace some ancient remains, which appear to be those of the wayside chapel noted by Leland in his "Itinerary" (temp. Henry VIII.). He tells us —
"At the north end of Caversham Bridge, as we come from Reading, there standeth a fair old chapel of stone, on the right hand, piled in the foundation because of the rage of the Thames." In the letters addressed to Hearne, the antiquary, is one dated 1727, from an inquirer, who informs him that "this chapel was dedicated to St. Anne", and that from thence the religious went at certain times to a holy well, "between the field called the Mount and a lane called Priest's Lane", from which circumstance it obtained its name; and that there was "in the memory of man a large ancient oak just by this well, which was also had in great veneration."

1869:  An iron bridge “was thrown across” divided almost in the centre with an island upon which stands an inn;  direct descendant perhaps of the former chapel.
1870: Caversham Bridge, Henry Taunt - 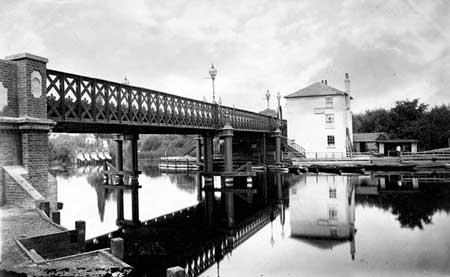 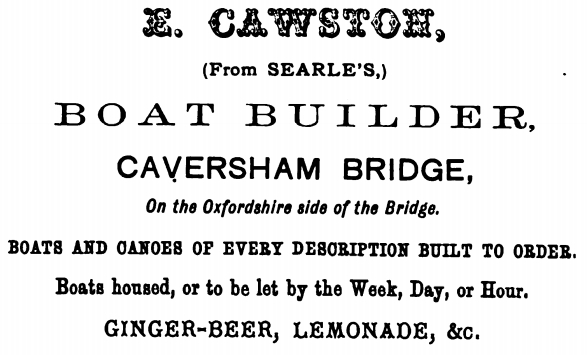 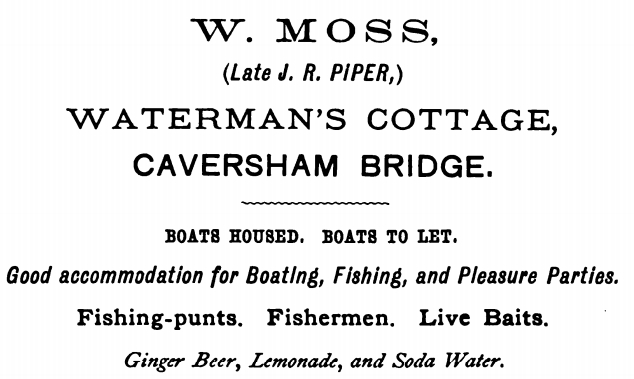 This bridge in old times was one of the most picturesque on the whole river;  I have heard it described by people who remembered it.
The present bridge is ugly enough, being built with iron girders and pillars.
A stone in the brick abutment bears the date 1747, with the names of the Mayor and Chamberlain at the time, but this obviously refers to the old bridge, which was of wood, with a large old-fashioned gate-house in the middle, on a sort of island.
The island exists, and a little boat-letter’s cottage and garden on the other side are not without the charms of age.
Above [Caversham] bridge the water is broad and deep. A quaint old garden runs along the Oxfordshire shore for some length;

Caversham Court is a public garden of about 1.3 hectares, located on the north bank of the River Thames near the centre of Caversham in Reading. It has been owned by Reading Borough Council since 1933. The gardens are included in the English Heritage Register of Parks and Gardens of Special Historic Interest as a Grade II landscape.
A private garden has been on the site since the 12th century when the rectory of St Peter’s Church was built, and many of its remaining features date from the 17th century. The house (now demolished) and garden were connected with some of Reading’s more distinguished citizens, like the Simonds family, as well as with some of England’s most significant historical events, like the Civil War and the Gunpowder Plot.
The main attraction of the site is that history has preserved a private garden and made it available as an intimate and charming public space in an attractive riverside position. As such, it is unique in Reading, and, indeed, in the Thames Valley.

Caversham Court in David Naish's A History of Berkshire -

Caversham Court, alias 'The Old Rectory' was the second great house of the parish, after Caversham Park. It stood on the site of the old Chapel of Our Lady of Caversham, an important pilgrimage centre in Medieval times for the worship of the Virgin Mary. Originally a Tudor house built after the Dissolution of the Monasteries around two courtyards, its beautiful timber-framing led to its nickname of the Striped House. It had a 1638 staircase, with bullet holes from a Civil War attack, and an elaborate decorated plaster ceiling. Both survived an almost total rebuilding programme by Pugin, in 1840, under the patronage of the great brewing Simonds family. Pugin gave the house a castellated facade with fretwork balustrading and a 'Norman' porch surmounted by the figure of Cardinal Wolsey. But it did not last another hundred years and was demolished in 1933. 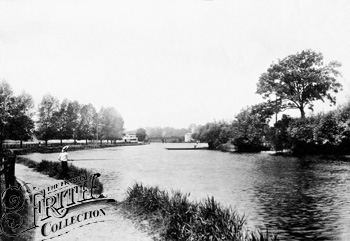 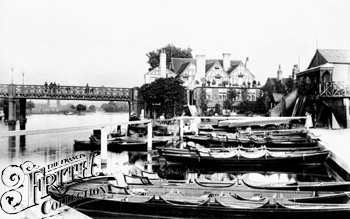 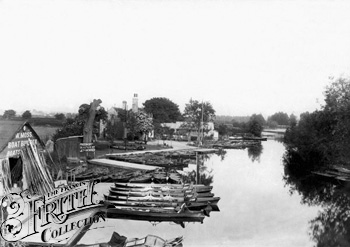 1890:  Caversham from the Bridge, Francis Frith 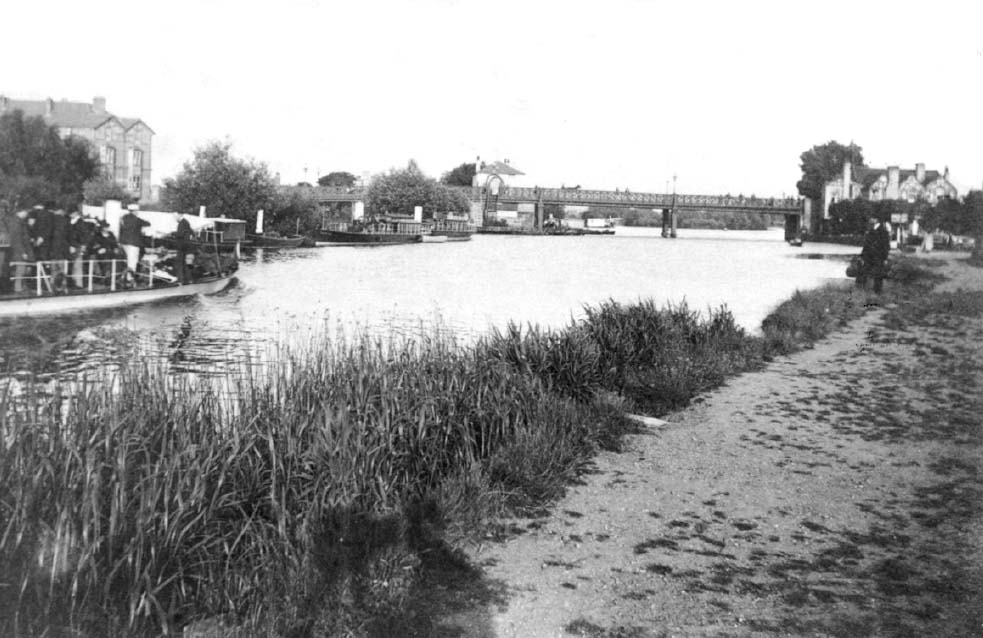 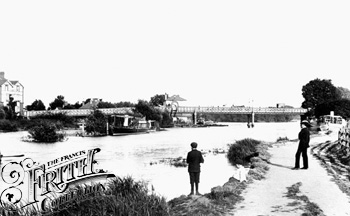 Within the memory of man there was a beautiful old bridge between Reading and Caversham. It was built of brick, and had ten arches, some constructed of stone. About the time of the Restoration some of these were ruinous, and obstructed the passage by penning up the water above the bridge so that boats could not pass without the use of a winch, and in the time of James II the barge-masters of Oxford appealed to Courts of Exchequer, asserting that the charges of pontage exacted on all barges passing under the bridge were unlawful, claiming exemption from all tolls by reason of a charter granted to the citizens of Oxford by Richard II. They won their case. This bridge is mentioned in the Close Rolls of the early years of Edward I as a place where assizes were held. The bridge at Cromarsh and Grandpont outside Oxford were frequently used for the same purpose. So narrow was it that two vehicles could not pass. For the safety of the foot passenger little angles were provided at intervals into which he could step in order to avoid being run over by carts or coaches. The chapel on the bridge was a noted feature of the bridge. It was very ancient. In 1239 Engelard de Cyngny was ordered to let William, chaplain of the chapel of Caversham, have an oak out of Windsor Forest with which to make shingles for the roofing of the chapel. Passengers made offerings in the chapel to the priest in charge of it for the repair of the bridge and the maintenance of the chapel and priest. It contained many relics of saints, which at the Dissolution were eagerly seized by Dr. London, the King's Commissioner. About the year 1870 the old bridge was pulled down and the present hideous iron-girder erection substituted for it. It is extremely ugly, but is certainly more convenient than the old narrow bridge, which required passengers to retire into the angle to avoid the danger of being run over.
These bridges can tell many tales of battle and bloodshed. There was a great skirmish on Caversham Bridge in the Civil War in a vain attempt on the part of the Royalists to relieve the siege of Reading. 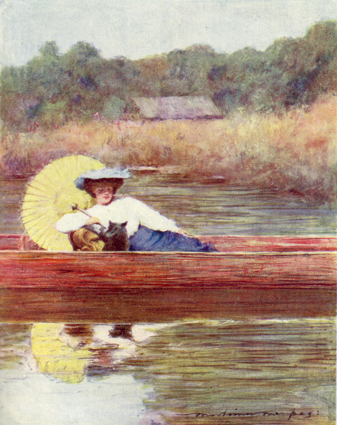 1908: Caversham promenade from the Bridge - 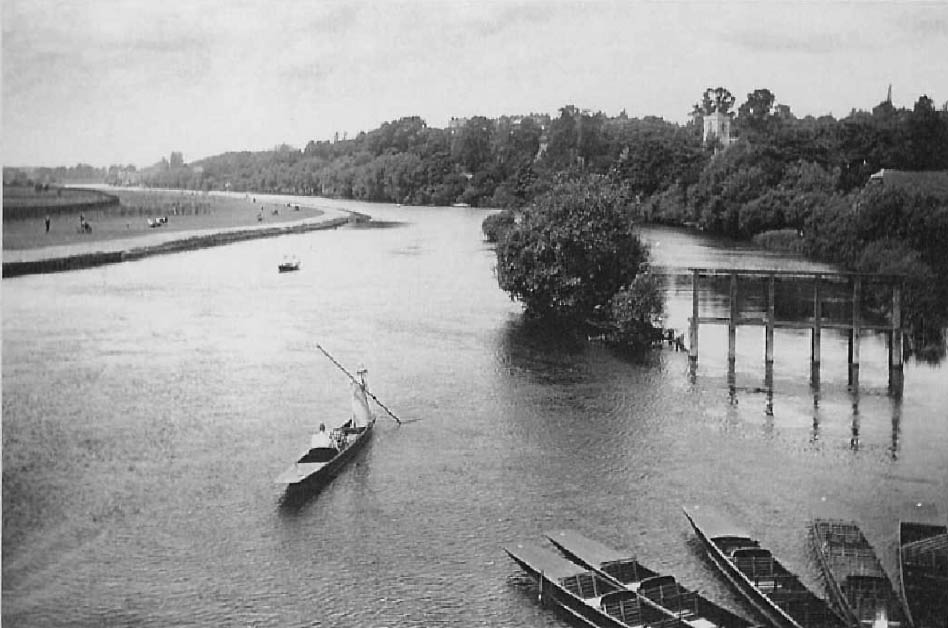 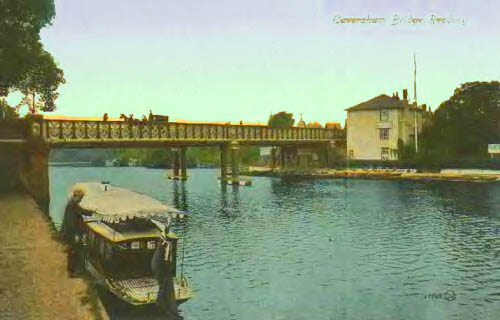 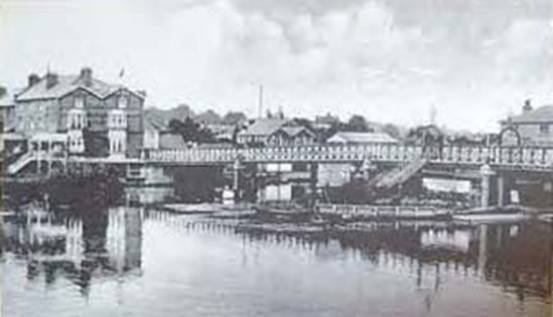 1912:  Plans to build two new bridges – one at Caversham, the other lower at Reading.  The Reading Bridge (1923) was to be built first, after which the iron bridge could be demolished and the new Caversham bridge built on its site.
1924:  The Caversham Bridge was started
1926: The present Caversham Bridge being built -

1926:  The new Caversham Bridge opened by Edward, Prince of Wales

Caversham Bridge, a good example of a well designed modern arched bridge in concrete with a granite balustrade. 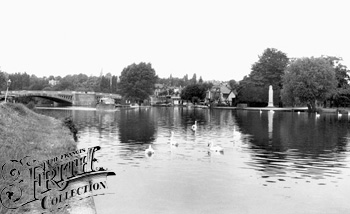 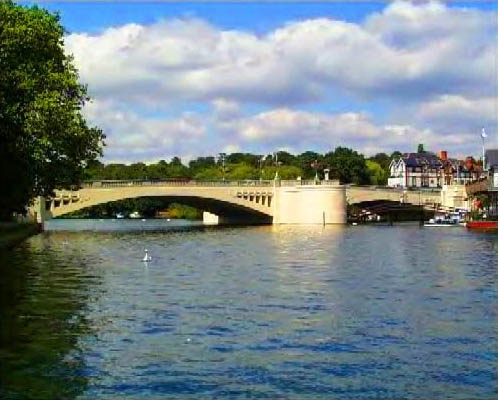 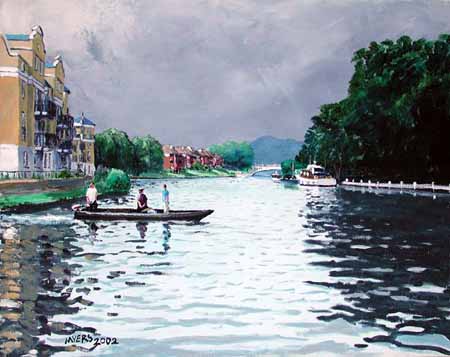 [ I think the boat in Doug Myer's picture is a water taxi taking a couple over to De Montfort Island - perhaps boat owners whose boats are moored there in rather more safety than might be found on the Reading bank. ]