The George and Dragon has a landing stage suitable for small to medium boats. It may sometimes be necessary to "double park" - but make sure the larger, stronger, boats are on the inside! There is no right to book or reserve places.
The current here is sufficient to set up a continual vibration in a punt pole -

At Wargrave, the river, which has been running nearly north and south all the way between here and Henley, takes a smart turn to the west, away towards Reading;  this turn makes the difficulties of punting rather great just at the bend, and I know no greater test of a punters skill, than in coming down from the railway bridge to bring up handsomely without any hitch or contretemps, at Mrs. Wyatt's wharf, on which the whole stream from the west pours its strength.

Nestled on the banks of the river we provide the perfect setting to escape the hustle and bustle of everyday life.
Our characterful building is filled with cosy corners, comfy armchairs, open log fires and boasts a unique dining room.
Chef's freshly prepared menus and our carefully selected wines, ales and lagers are served daily from lunch right through until dinner. 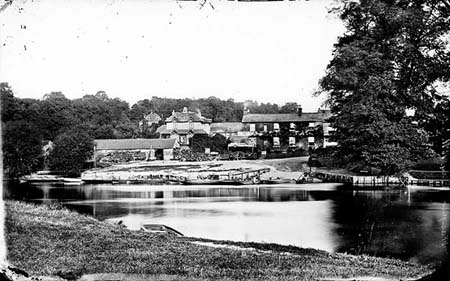 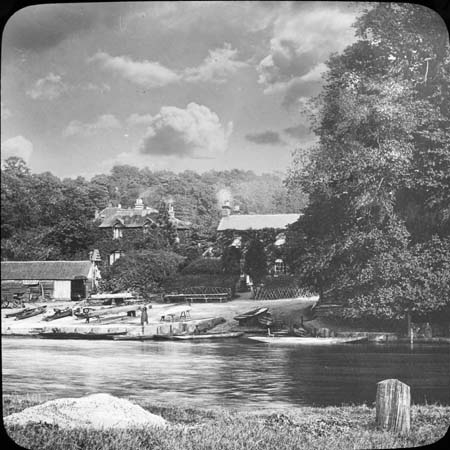 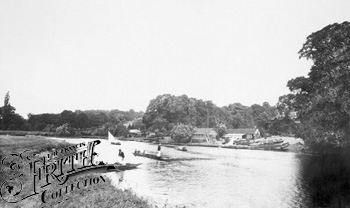 1890:  Wargrave Ferry, Francis Frith
It is no longer (except during Wargrave regatta!) 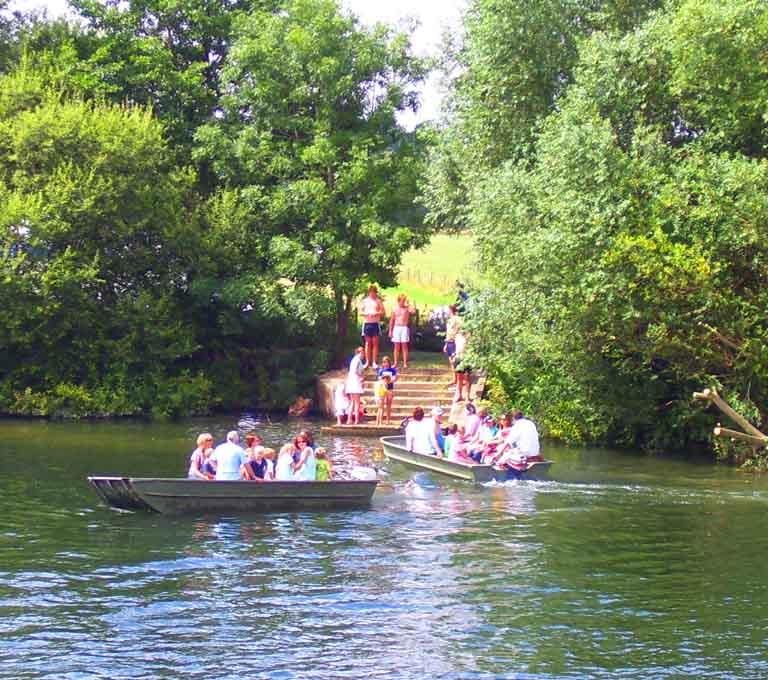 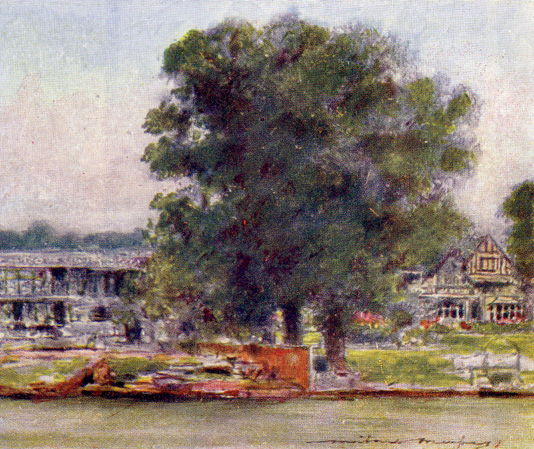 The signs now in use again in 2004 are the original signs painted by George Leslie and his friend Hodgson in the 1870s and mentioned by George Leslie himself in his book "Our River", 1881, by Charles Dickens junior in 1885, by Jerome K Jerome in 1889, and by Miss Mitton in 1906 -
Together with new modern versions.

You cannot do better than stop and have lunch at the George and Dragon
It was during our stay at Wargrave this year that my friend Mr Hodgson and I repainted Mrs Wyatt's signboard for her - the George and Dragon. I painted my side first, a regular orthodox St George on a white horse, spearing the dragon.  Hodgson was so taken with the idea of painting a signboard that he asked me to be allowed to do the other side, to which I of course consented, and as he could only stop at Wargrave one day he managed to do it on that day;  indeed it occupied him little more than a couple of hours.  The idea of his composition was suggested by Signor Pellegrini, the well-known artist of Vanity Fair; the picture represented St George, having vanquished the dragon, and dismounted from his horse, quenching his thirst in a large beaker of ale.  These pictures were duly hung up soon after, and very much admired;  they have since had a coat of boat varnish, and look very old masterly.  Hodgson's which gets the sun on it, is a little faded, but mine, which faces the north towards Henley, still looks pretty fresh.  There were some paragraphs about this sign in The World, the editor of which was staying at Wargrave at the time, and one of these was printed in gold type, and presented to Mrs Wyatt, and hangs up in the inn parlour.

Wargrave ... a pleasant village on the road from Twyford to Henley, both stations on the Great Western Railway in the middle of a first-rate fishing district, and highly popular amongst artists.
Public evidence of the latter fact is afforded by the sign of the principal inn of the village, the "George and Dragon". Here Mr G D Leslie, R.A. has depicted the terrific encounter between the saint and the reptile; and on the other side Mr J E Hodgson R.A. has limned St George, his work concluded, his spear stuck in the ground, taking his pint of beer with a thoroughly comic air of complacent content ...

The old-fashioned house, with sanded floor and pewter cups, has probably not changed its fashions and habits for half a century, or even a hundred years. In the principal parlor there is the kind of old mahogany spider-legged sideboard which Boughton and other artists cherish in their new homes. On the walls are preserved fish of noble weight which have been taken from the river by fortunate anglers. We prepared to sip the boatmans nectar in the little arbor outside the inn, and to watch an artist, who was moored in a punt almost in mid-stream, busily catching the changing lights that were gradually melting into the gloaming.

Mellowed in the drowsy sunlight of a summer's afternoon, Wargrave, nestling where the river bends, makes a sweet old picture as we pass it, and one that lingers long upon the retina of memory.
The "George and Dragon" at Wargrave boasts a sign, painted on the one side by Leslie, R.A., and on the other by Hodgson of that ilk.  Leslie has depicted the fight; Hodgson has imagined the scene, "After the Fight" - George, the work done, enjoying his pint of beer.

Wargrave bears an air of propriety, as befits the last resting-place of the creator of "Sandford and Merton". Carriages with liveried footmen roll by on the village street, upon which new Queen Anne houses open their doors.
The artistic respectability of "The George and Dragon" is vouched for by its painted sign, the not very wonderful work of two R.A's.
On each side the inn, lawns slope down from private houses, and boats lie moored along the shore. And, as if to show they are not common folk, the boating men of Wargrave go so far as to make themselves ugly and wear a little soldier cap stuck on one side of their heads. ...
In the quiet of the evening it was pleasant to pull back to "The George and Dragon" in time to see the sun sink, a ball of fire, below the wide stretch of golden meadowland opposite, where villagers played cricket after their day's work.

The river turns almost a right angle at Wargrave, and, from running eastward, goes due north. The little village, being situated at the bend, gets the benefit of both vistas. The George Hotel, indeed, stands exactly at the angle, and the sweep of the water catches its wharf with full force. It boasts a signboard painted by two R.A.s; this is preserved indoors, while another swings as its proxy in the village street. Placed as it is in regard to the river channel, and with the wide flats of Shiplake meadows opposite, the hotel is exposed, and the very openness of its garden, an attraction which draws hundreds of summer visitors, makes it a butt for the racing winds of early spring. It is a pretty hotel built of brick, with a white painted verandah, after the usual river pattern; and a gigantic wistaria embowers all the front in its delicate mauve in summer, while roses trained over trellis work flash answering colour signals. 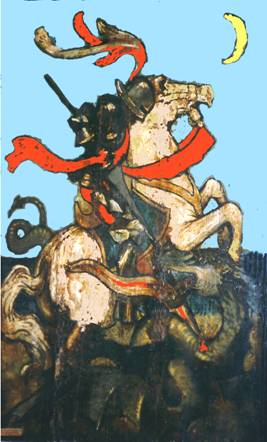 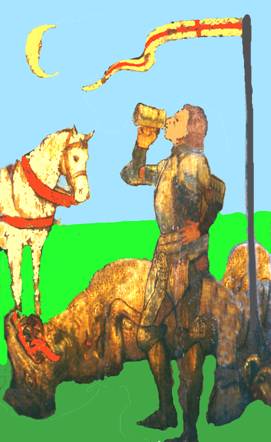 [ These photos of the signs have been considerably enhanced.  The originals are badly cracked and discoloured.  The photographs, from which the above signs were reconstructed, show the problems - ] 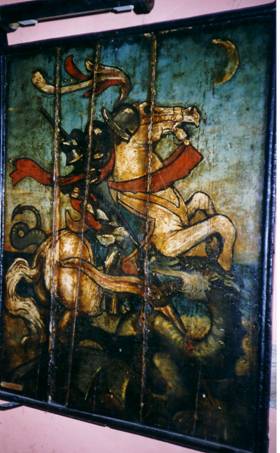 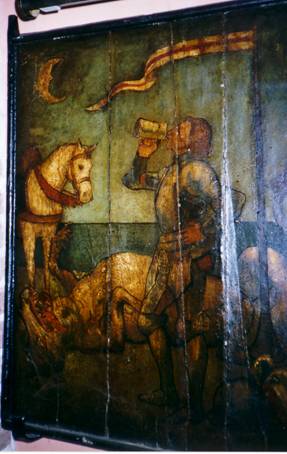 The art of painting signboards is almost lost, and when they have to be renewed sorry attempts are made to imitate the old designs. Some celebrated artists have not thought it below their dignity to paint signboards. Some have done this to show their gratitude to their kindly host and hostess for favours received when they sojourned at inns during their sketching expeditions. The "George" at Wargrave has a sign painted by the distinguished painters Mr. George Leslie, R.A., and Mr. Broughton, R.A., who, when staying at the inn, kindly painted the sign, which is hung carefully within doors that it may not be exposed to the mists and rains of the Thames valley. St. George is sallying forth to slay the dragon on the one side, and on the reverse he is refreshing himself with a tankard of ale after his labours. Not a few artists in the early stages of their career have paid their bills at inns by painting for the landlord.

[ George Leslie himself says the second side was painted by Hodgson, not Broughton.
The signs are now once again in use outside behind glass. I hope this means that some thought has been given to their preservation from damp and also from light. These are valuable paintings! ] 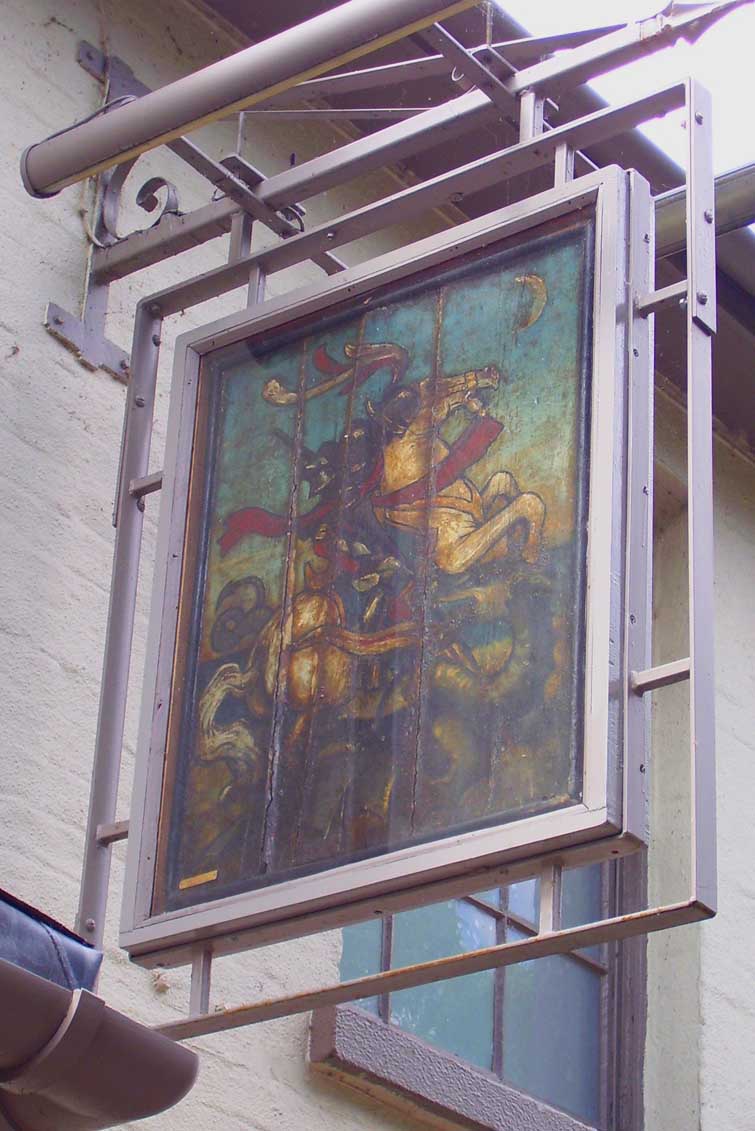 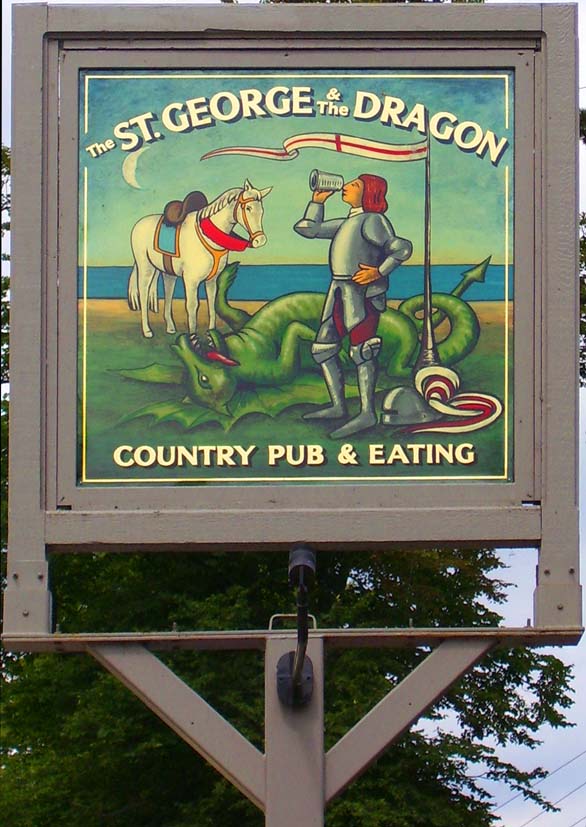 I have seen somewhere - maybe in the bar at the George and Dragon - a cartoon of a timorous drunk approaching a right hag of a barmaid - and he is saying "Is George in?"
If anybody has it could they send me a copy?