Marlow, from "The Genius of the Thames" by Thomas Love Peacock

Delight shall check the expanded sail
In woody Marlow's winding vale:
And fond regret for scenes so fair
With backward gaze shall linger there. 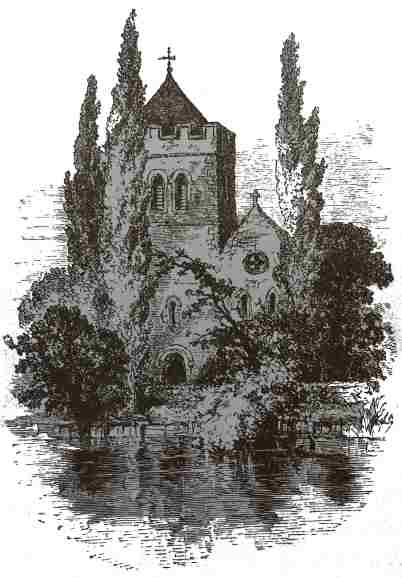 'During the year 1817 we were established at Marlow, in Buckinghamshire. Shelley's choice of abode was fixed chiefly by this town being at no great distance from London, and its neighborhood to the Thames.
The poem was written in his boat, as it floated under the beech groves of Bisham, or during wanderings in the neighboring country, which is distinguished for peculiar beauty. The chalk hills break into cliffs that overhang the Thames, or form valleys clothed with beech; the wilder portion of the country is rendered beautiful by exuberant vegetation; and the cultivated part is peculiarly fertile.
With all this wealth of nature which, either in the form of gentlemen's parks or soil dedicated to agriculture, flourishes around, Marlow was inhabited (I hope it is altered now) by a very poor population.
The women are lacemakers, and lose their health by sedentary labor, for which they were very ill paid. The poor-laws ground to the dust not only the paupers, but those who had risen just above that state, and were obliged to pay poor-rates. The changes produced by peace following a long war, and a bad harvest, brought with them the most heart-rending evils to the poor. Shelley afforded what alleviation he could.

DRIFTING down in the grey-green twilight,
O, the scent of the new-mown hay !
The oars drip in the mystic shy light,
O, the charm of the dying day !
While fading flecks of bright opalescence
But faintly dapple a saffron sky,
The stream flows on with superb quiescence,
The breeze is hushed to the softest sigh.
Drifting down in the sweet still weather,
O, the fragrance of fair July !
Love, my Love, when we drift together,
O, how fleetly the moments fly !

Drifting down on the dear old River,
O, the music that interweaves !
The ripples run and the sedges shiver,
O, the song of the lazy leaves !
And far-off sounds - for the night so clear is
Awake the echoes of bygone times ;
The muffled roar of the distant weir is
Cheered by the clang of the Marlow chimes.
Drifting down in the cloudless weather,
O, how short is the summer day !
Love, my Love, when we drift together,
O, how quickly we drift away !

Drifting down as the night advances,
O, the calm of the starlit skies !
Eyelids droop o'er the half-shy glances,
O, the light in those blue-grey eyes !
A winsome maiden is sweetly singing
A dreamy song in a minor key ;
Her clear low voice and its tones are bringing
A mingled melody back to me.
Drifting down in the clear calm weather,
O, how sweet is the maiden's song !
Love, my Love, when we drift together,
O, how quickly we drift along !

From Marlow up to Sonning is even fairer yet ...
It was while floating in his boat under the Bisham beeches that Shelley, who was then living at Marlow (you can see his house now, in West street), composed THE REVOLT OF ISLAM. 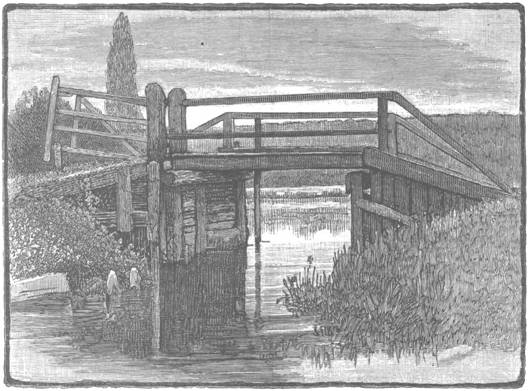 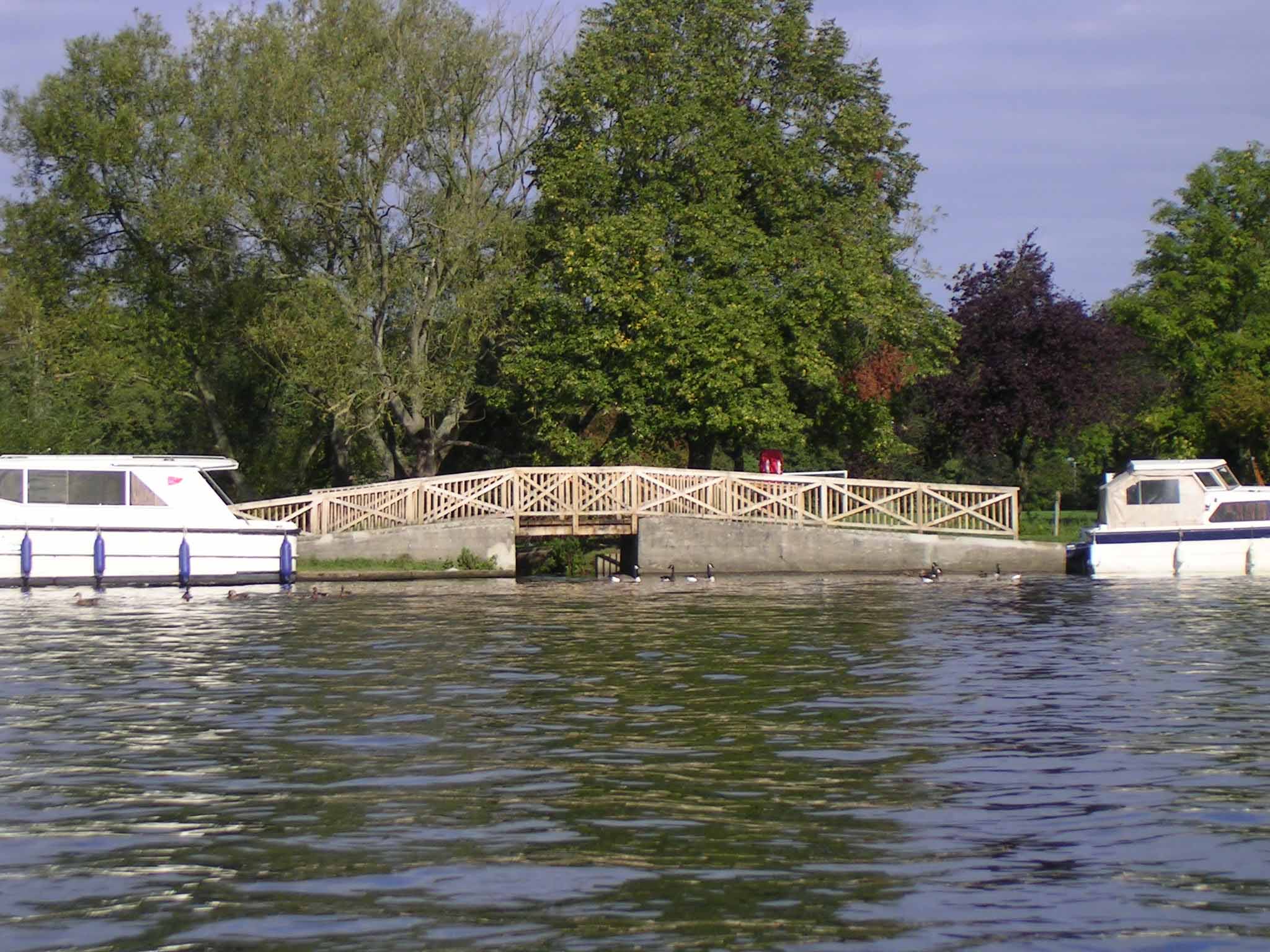 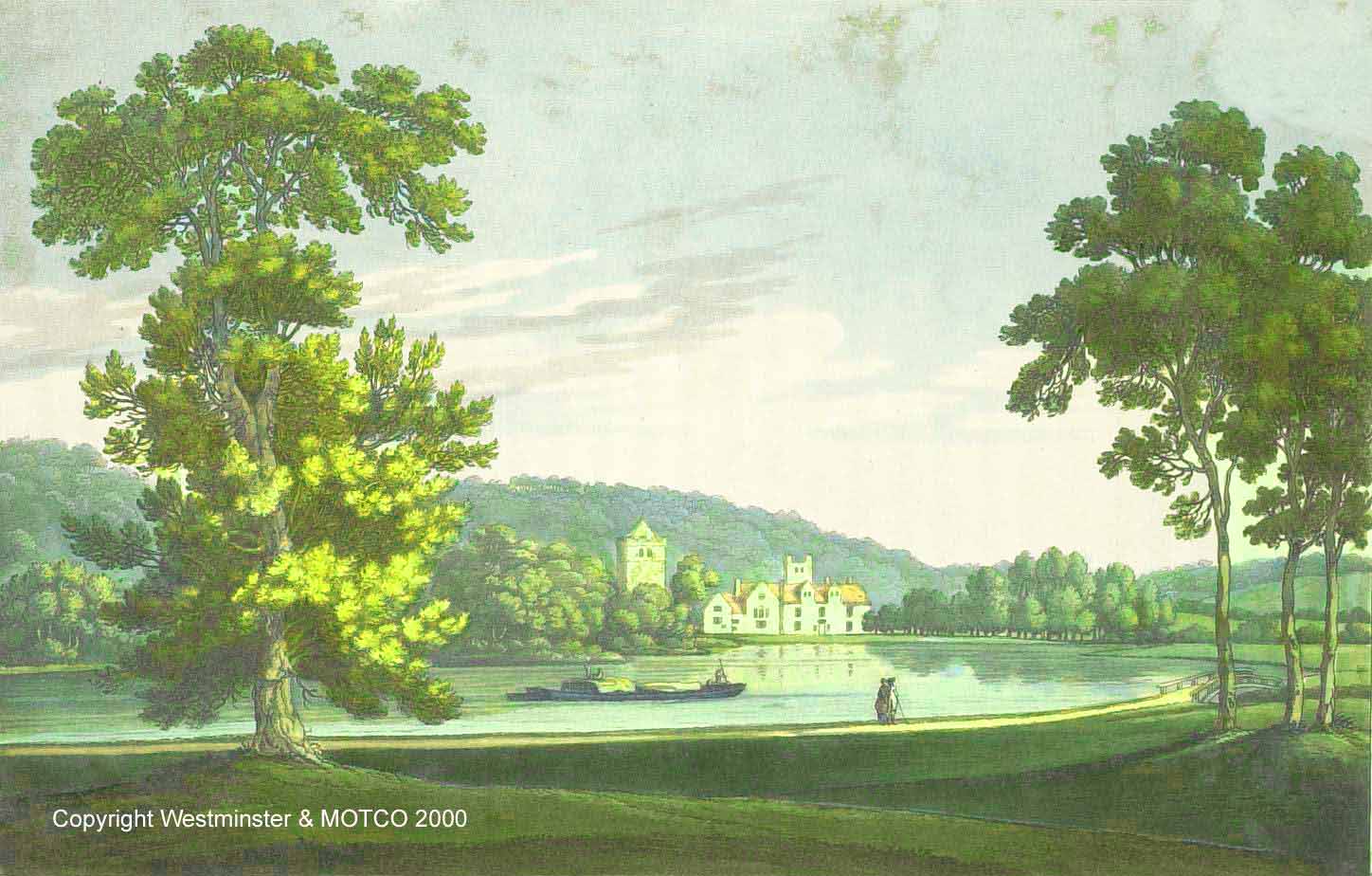 Just before you come to the abbey, and right on the river's bank, is Bisham Church, and, perhaps, if any tombs are worth inspecting, they are the tombs and monuments in Bisham Church. 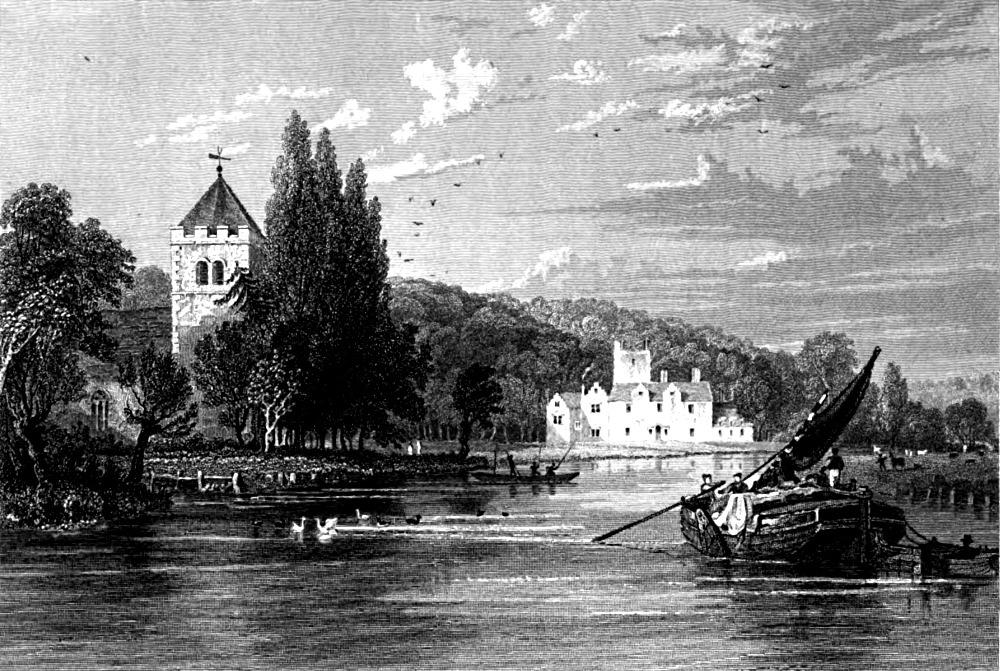 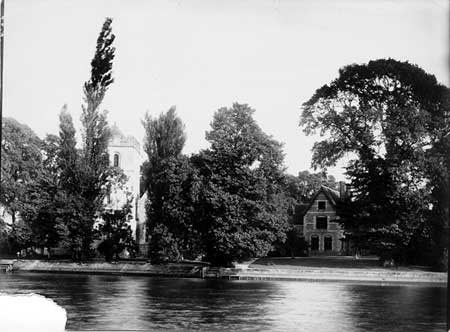 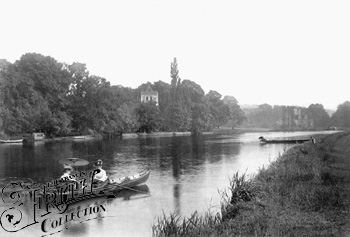 Ancient and picturesque Bisham is the immediate neighbour of Marlow, on the Berkshire shore. It is the place where we shall pause awhile in our journeying, before we far forward towards Henley, and certainly there could be no more delightful resting place.
These often painted banks glow with the varied foliage of beech, oak and elm, which grace the river with exceeding charm.
The grey old Norman tower of Bisham Church is well known to all boatmen. 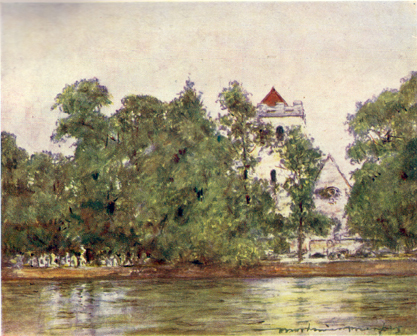 1992: Skyscan's Aerial View of Bisham Church in The Secret Thames - 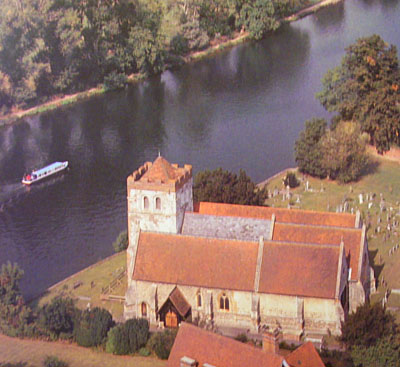 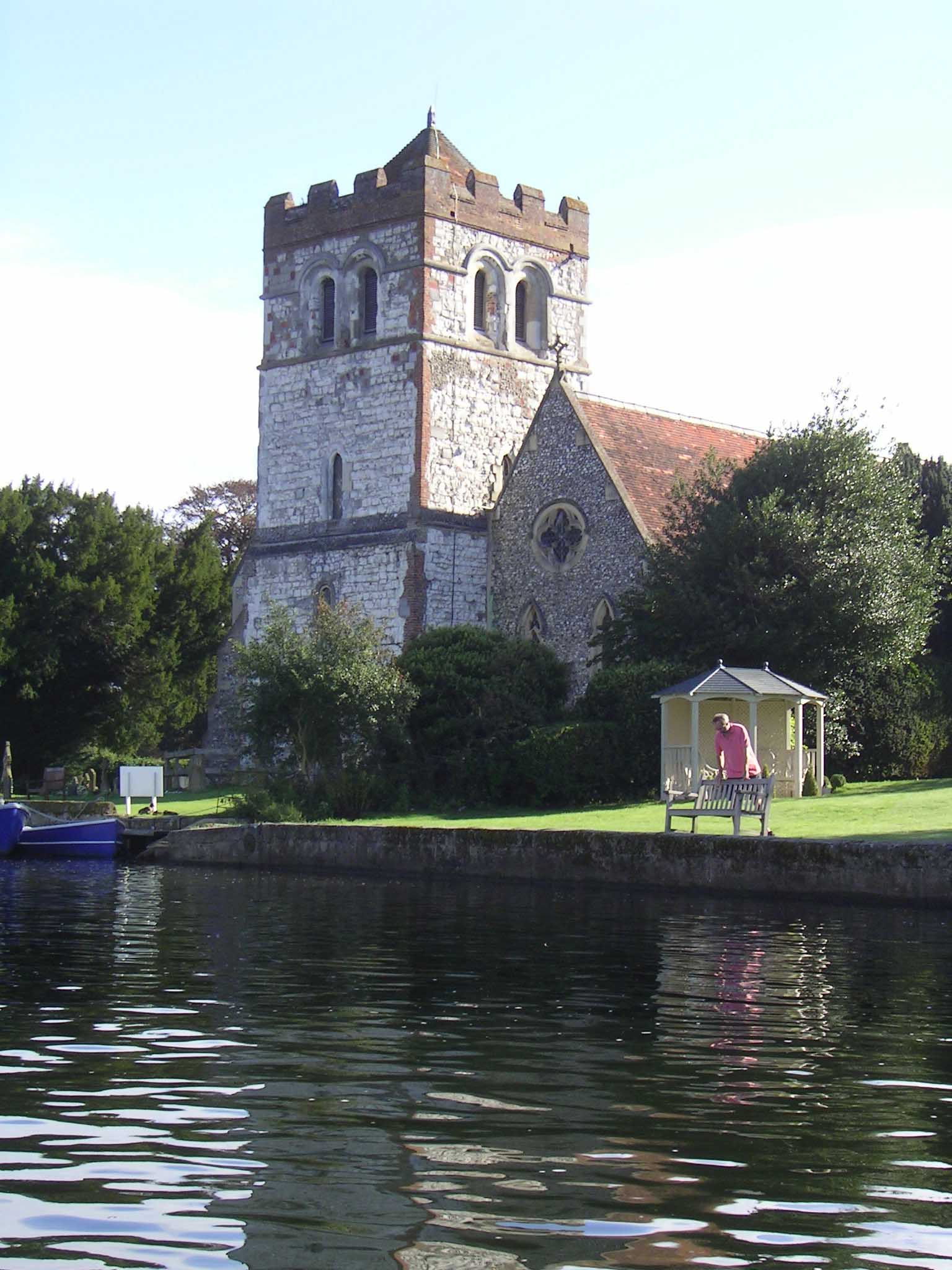 Nothing can be finer than Bisham Abbey and Church, Temple Mills, Hurley and Harleyford;  as a typical piece of Thames scenery it has no equal in my estimation.
...
The little church at Bisham has not escaped the restorer's hands;  its situation is however its great charm, and cannot fail to attract the gaze of the passer by.
Inside the church, the old tomb of the Hobbies is interesting, and the exquisite colouring of the window, with its wonderful coats of arms in it, may serve to help an artistic mind through the tedium of a dull sermon. [!]
I never pass Bisham Church without seeing one or perhaps two artists at work from it, seated on the tow-path opposite.  There must have been a great number of drawings made of this prettily composed little group, but I never recollect seeing any at the various Exhibitions.