Above lock keep to Right bank away from weir
Before 1066: A mill in Marlow
1086: Marlow Mill (and therefore weir) in the Domesday Book

... a certain windasium (winch) upon the Thames here.

That of course is the crucial item which changes a weir from being simply a means of achieving power for a watermill into a means of navigation.  Many of our ancient weirs will be found to be set at such an angle that there is land immediately above them on which a winch can be sited to give a straight pull up the weir.  And Marlow is a perfect example.  Indeed it is hard to see the rationale for the position of the weir in any other way.
For what a windasium might have looked like see Hurley Winch.

1585: Stripe's Stow, Survey of London he mentions many weirs -

especially one lock, called Marlow Lock, of which there had been great complaints.  It was held by one Farmour.  The streams there were so strong, and the water had such a dismal fall, that four men within a short time were lost;  three whereof drowned, and a fourth had his brains dasht out.  And all the recompence the poor widow had, was that Farmour gave her five shillings.  But beside the danger, it was very expensive to the poor bargemen, the millers selling the water in the stream for above £300 a year.

The millers depended on the head of water for their power to grind the wheat and therefore ultimately for their income.  If barges needed to come through the weir then that head had to be reduced greatly by opening the weir and so they charged for that.  In addition barges trying to negotiate shallow areas below the weir would pay for a flash of water to float them through.

Then Marlow locke is worst, I must confess,
The water is so pinched with shallowness.

Samuel Clarke of London, gentleman, was charged in that he did, on the first of April, 1697, by force of arms, at the parish of Bissam, Berks, hinder navigation in the River Thames, from time immemorial  a common navigable river for all subjects of the King, by erecting a lock whereby the King's subjects have been hindered in navigating and rowing, and many boats have been lost to the common nuisance.

CASE 1026: THE KING AGAINST CLARK. (English Reports Citation: 88 E.R. 1558)
An information was filed against Clark for building of locks on the river Thames, to the obstruction of navigation.
And per HOLT, chief Justice:
To hinder the course of a navigable river is against Magna Charta, c.23. and anything that aggravates the fact, though not directly to the issue, may be given as evidence upon it; as here taking of money to let people pass. And it is no exception to a witness here, that he contributes to carry on the suit, or that this public nusance[sic] was to his private nusance.

I think the reference in the original Magna Carta is to clause 33 (23 in the statutory version of 1298). These are the river related clauses of Magna Carta -

13. The city of London shall have all its ancient liberties and free customs, as well by land as by water
23. No village or individual shall be compelled to make bridges at river-banks, [unless] legally bound to do so.
33. All kiddles [weirs?] for the future shall be removed altogether from Thames and Medway and throughout all England, except upon the seashore
47. ... river-banks that have been placed "in defense" by us in our time [shall be opened up again].
48. All evil customs connected with ... river-banks and their wardens, shall immediately be inquired into [locally, soon] and utterly abolished so as never to be restored ...

TAYLOR's LAST VOYAGE 1610
I truely treate that men may note and see
What blessings Navigable Rivers bee,
And how that thousands are debarr’d those blessings
By few mens avaritous hard oppressings.
John Taylor.

1767:  Parliamentary evidence given in 1793 recorded that a total of 56,365 tons of merchandise passed upwards through Marlow Flashlock.
[ That is over 150 tons every day of the year.  Somebody was working hard on that windasium!]
1773:  The first pound lock was set up on the Buckinghamshire side above the site of the modern lock.  Rollers were placed at suitable points to guide barges into it.  Winching was probably necessary both above and below the new pound lock.
1780:-

the pound lock in a very shattered and decaying state;  the largest barges often stick, and cannot get through without force

1787:  the shallows below the lock were so bad that temporary stops were suggested.  (Short timber dams set slantwise partly across the river, narrowing the fairway but scouring out and deepening what remained.  There was still then no lock at Cookham to help the situation)
1793:  A witness stated that after flashes he had walked over the channel at Marlow without wetting his feet
Flashing is a very abominable practice, because after the flash is drawn, and the flash lock shut again, it leaves the river almost dry for twenty four hours.

[I think the old bridge was lower down than the suspension bridge. ]

We had fine weather during our stay at Marlow, and I frequently took my two eldest children for a bathe in the river.
I punted down through the lock to the little backwater behind the race, as it is called;  it is very shallow here, and out of the sight of travellers on the main stream.  I swung my punt right across the stream, so that it touched both banks, and was thus held firmly by the current;  my little chicks could then safely paddle in the water about two feet deep above the boat, and there was no occasion to hold them, as even if they were knocked over by the stream, they must be carried back to the punt again.
They enjoyed it very much;  when they came out, the floor of the punt, warmed by the sun, was very comfy for their feet, and a luxurious large rough bath towel soon dried them up.
I thought this method of bathing far better for children than from a machine at the sea-side, as they were not frightened in the least, and grew quite bold;  they looked so very pretty in the water, the banks on either side fringed with forget-me-nots, the bottom all fine gravel and sand, and the water beautifully clear and sparkling in the sun, that I longed to paint a picture of them, and should have done so, were it not so very difficult, and quite beyond my powers as an artist to do justice to the scene. 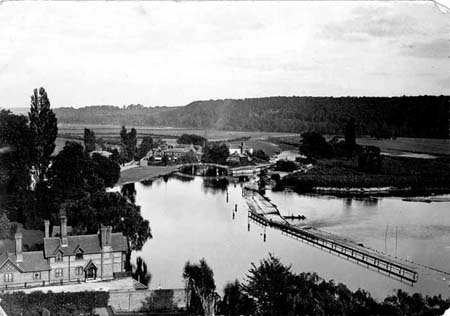 ...Below is the stream, rushing, seething, and boiling, lashing through the sluices, tumbling over the weir, swirling between the rymers, eddying around the willow-grown isles, sweeping over the shallows, in a hurry to get away from the artificial cut to the lock, and apparently in a greater hurry to join it some distance below.
There is marvellous music about Marlow Weir. It is wondrous soothing, indescribably comforting, to smoke a lazy pipe and listen to it. There is a joyous note, with a sweet undercurrent of sadness in a minor key, that is singularly fascinating, and at the same time thrillingly touching.
And when, from time to time, the musical bells ring out from All Saints' Church, you enjoy a rare harmony that is difficult to describe, and would appear to be beyond the grasp of the most subtle of musical notators. A lingering lullaby, a soothful song, a peaceful poem, a comforting cantata - call it what you will - it is impossible to deny the fascination of the music of Marlow Weir.

Oh, muse for a while by the tossing tide -
'Tis good to ponder, and moon, and dream
Where the dimpled waters curve and glide
To ceaseless song of the swirling stream!
When today seems gone, and the past seems near -
As thoughts revert unto bygone times -
While the sweet sad music of Marlow Weir
Is gaily gladdened by Marlow Chimes!

The foam flies fast as the flood runs by;
The ripples redden with gleam of sun;
The sun sinks low and the saffron sky
To twilight deepens - the day is done
While the lightsome laughter of yester year,
The poem of youth, with its reckless rhymes,
Seems mingled with music of Marlow Weir,
And finds an echo in Marlow Chimes! 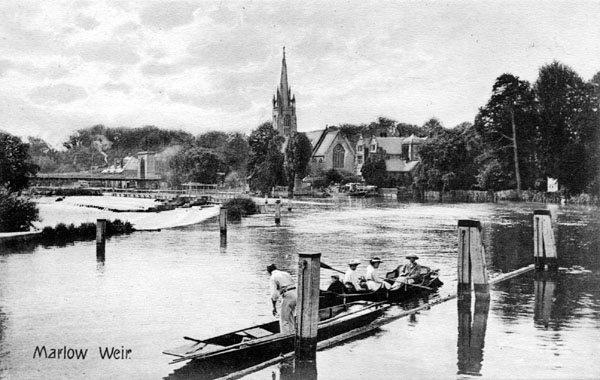 Marlow Weir from above lock, 1900s 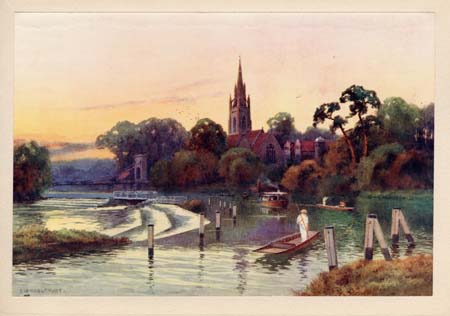 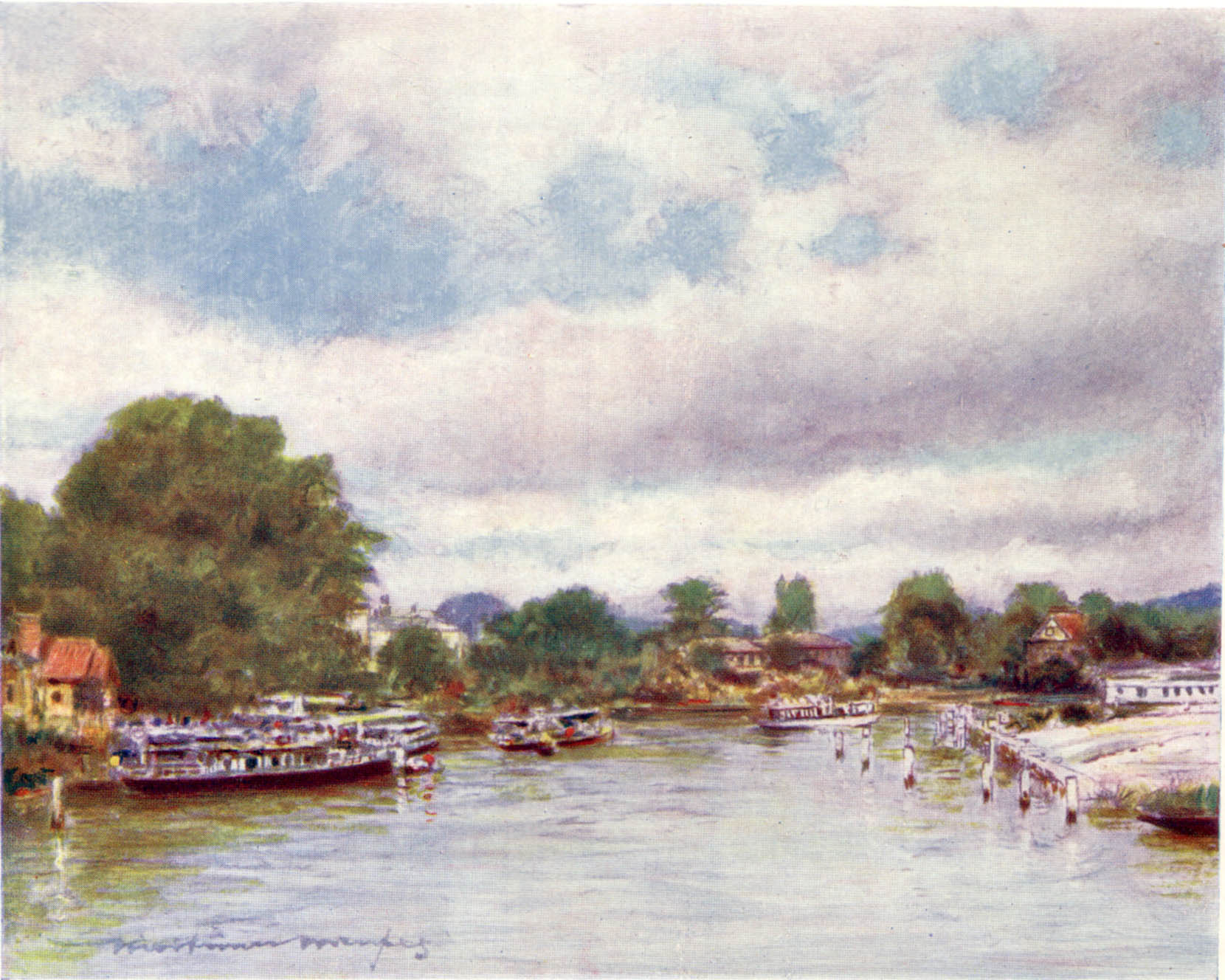 In December 1931, Arthur Hobbs and his three sons performed a daring rescue in Marlow after a racing eight from Marlow Rowing Club was swept against the weir, known as the "lion's mouth"
The operation, which took over an hour, was watched by many onlookers from the bridge.