Note that there may be two "Ferry Lanes" on the Cookham side - or perhaps the main road is not called Ferry Lane until it reaches the north bank? Alternatively realise that there were at least two ferries here (one replaced by the bridge, and the other from what is now the slip beside the Ferry Inn to the towpath on the north bank of the lock cut.)

The antiquity of the crossing of the Thames at Cookham is supported by a certain amount of pre-historic evidence, worth about as much as such evidence ever is, and about as little. Two Neolithic flint knives have been found there, a bronze dagger sheath and spear-head, a bronze sword, and a whole collection or store of other bronze spear-heads. Such as it is, it is a considerable collection for one spot. Cookham has not only these pre-historic remains; it has also fragments of British pottery found in the relics of pile dwellings near the river, and two Roman vases from the bed of the stream; it has further furnished Anglo-Saxon remains, and, indeed, there are very few points upon the river where so regular a continuity of the historic and the pre-historic is to be discovered as in the neighbourhood of this old ford.

The Camlet Way ran from St. Albans to Silchester and appears to have crossed the Thames at Sashes Island in Cookham. Wooden piles and stakes found here in the nineteenth century (and again in 1969) may indicate the remains of a substantial bridge. There was probably an adjoining river port named Cwch-ium - Celtic for Boat-Place (the alternative Saxon Cook's Home seems somewhat obscure).

Sashes Island is what is now effectively Cookham lock island, and was called Odney Island 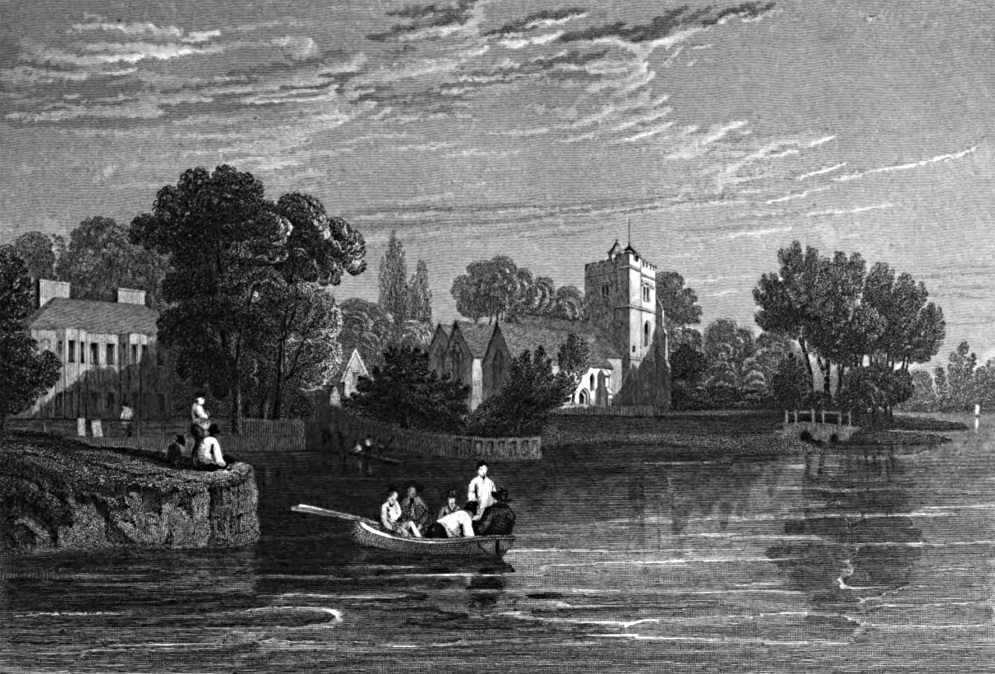 1834 Cookham before the bridge

Dec 21. A very high Flood and Cookham Bridge was Drove a way and a Great Deal of Damage Don.

[ I now think this is an example of the use of the word 'bridge' to mean any river crossing - not necessarily involving a fixed structure. In other words what was 'drove away' was a ferry boat [landing stage]! See Lambeth Bridge for a similar use. ]

1839:  Work started by Freebody on building a wooden bridge.  The figures given were: 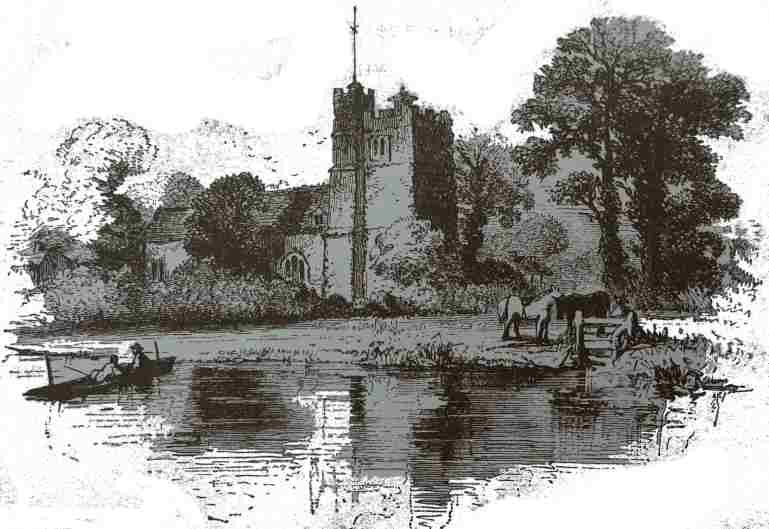 On the opposite bank — in Berkshire, that is to say — is Cookham, a pretty village, with a fine old church. A little lower down, and we row beside a lovely island of some acres in extent; it has been laid out in charming walks, with here and there seats for rest, and summer-houses, — every corner planted with fair flowers, shrubs, and cheerful evergreens. Another island — Formosa Island — somewhat further on, greets the voyager, and is also full of attractions.

1859:  It seemed doubtful if the timber bridge would survive the winter.

1865: I am not sure when the first bridge met its end. Six years later it looked like this - I think it is only half a bridge - and the vehicle ferry is in use in place of it  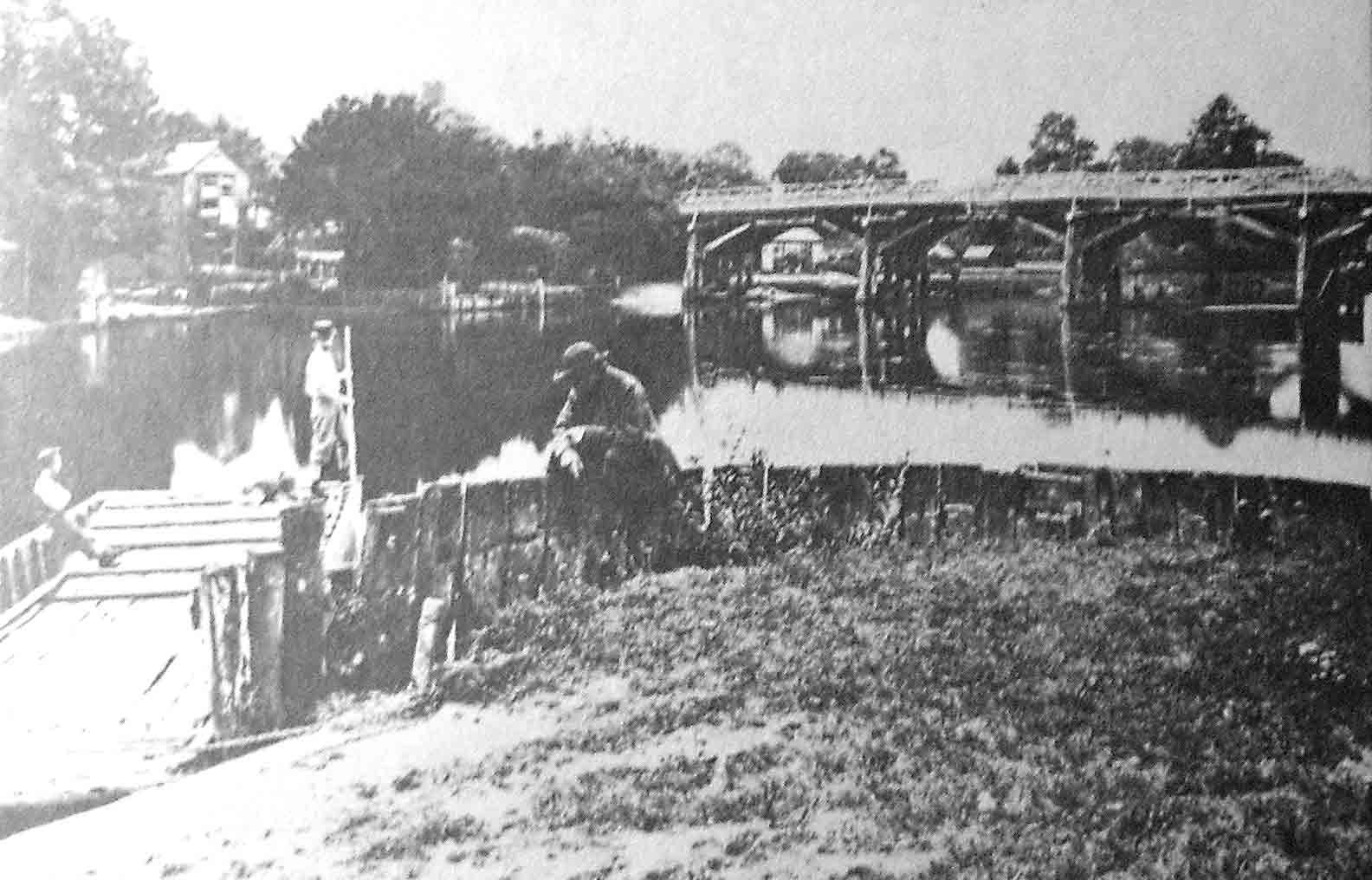 1867:  The current wrought-iron bridge, resting on cylindrical iron piers, was built at a cost considerably less than the wooden bridge it replaced.
1872:  Modern Examples of Road and Railway Bridges: illustrating the most recent practice of leading engineers in Europe and America. William H. Maw and James Dredge  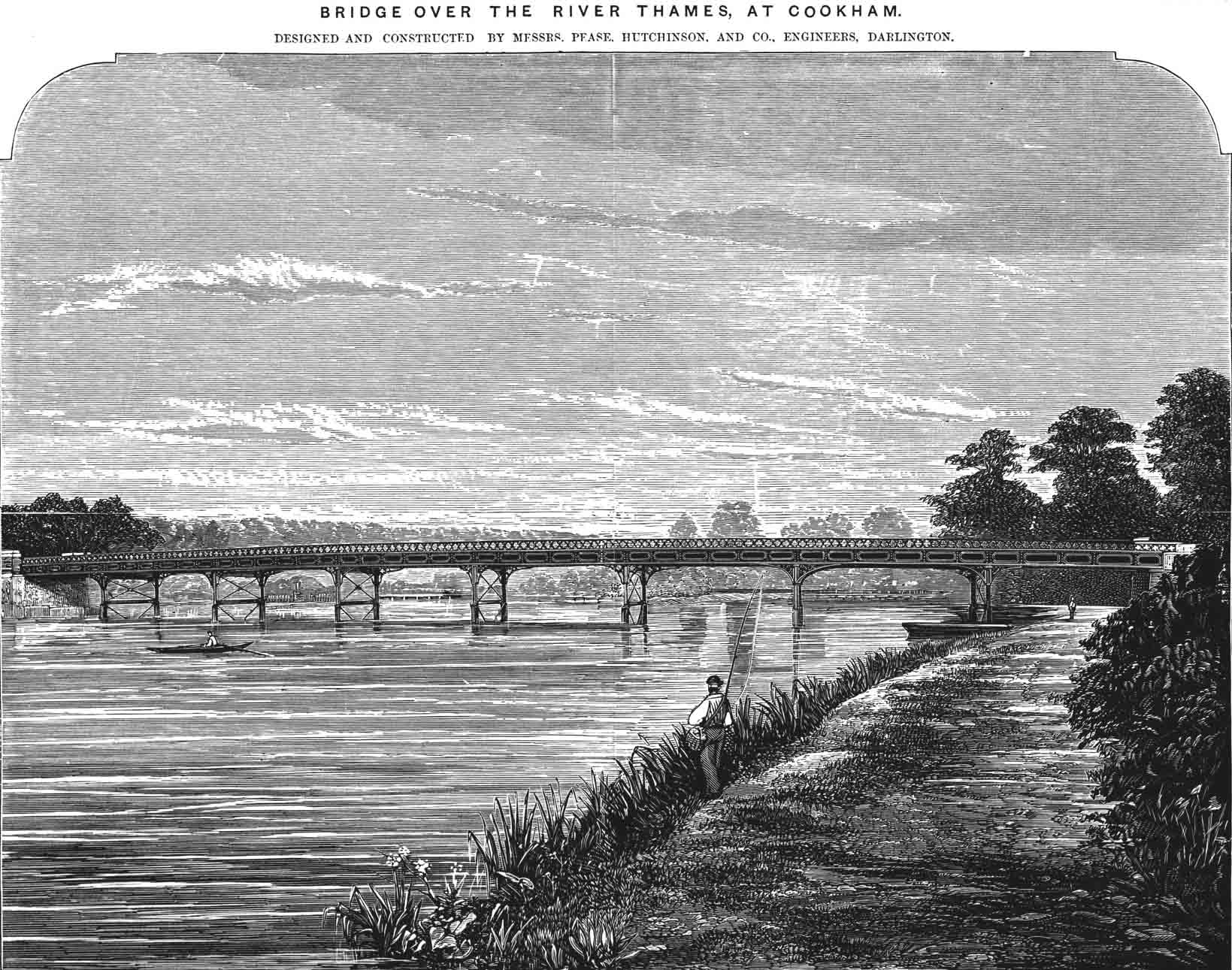 The Bridge over the Thames, at Cookham, is remarkable, not for its size, nor for difficulties attending its erection, but for the cheapness with which it was constructed.  When the Cookham Bridge Company decided on the construction of the new bridge, the directors advertised for designs, and in return thirty seven plans and estimates were sent in, these estimates varying from £1,900 to £27,000.

In Brunel's papers is this sketch for Cookham Bridge (but I don't know the date): 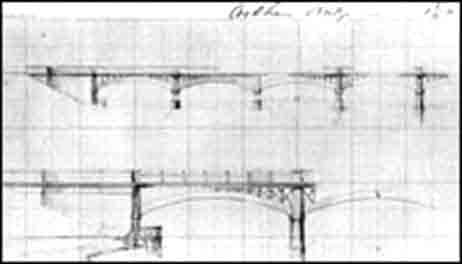 It would have been a more elegant bridge, but no doubt more expensive. 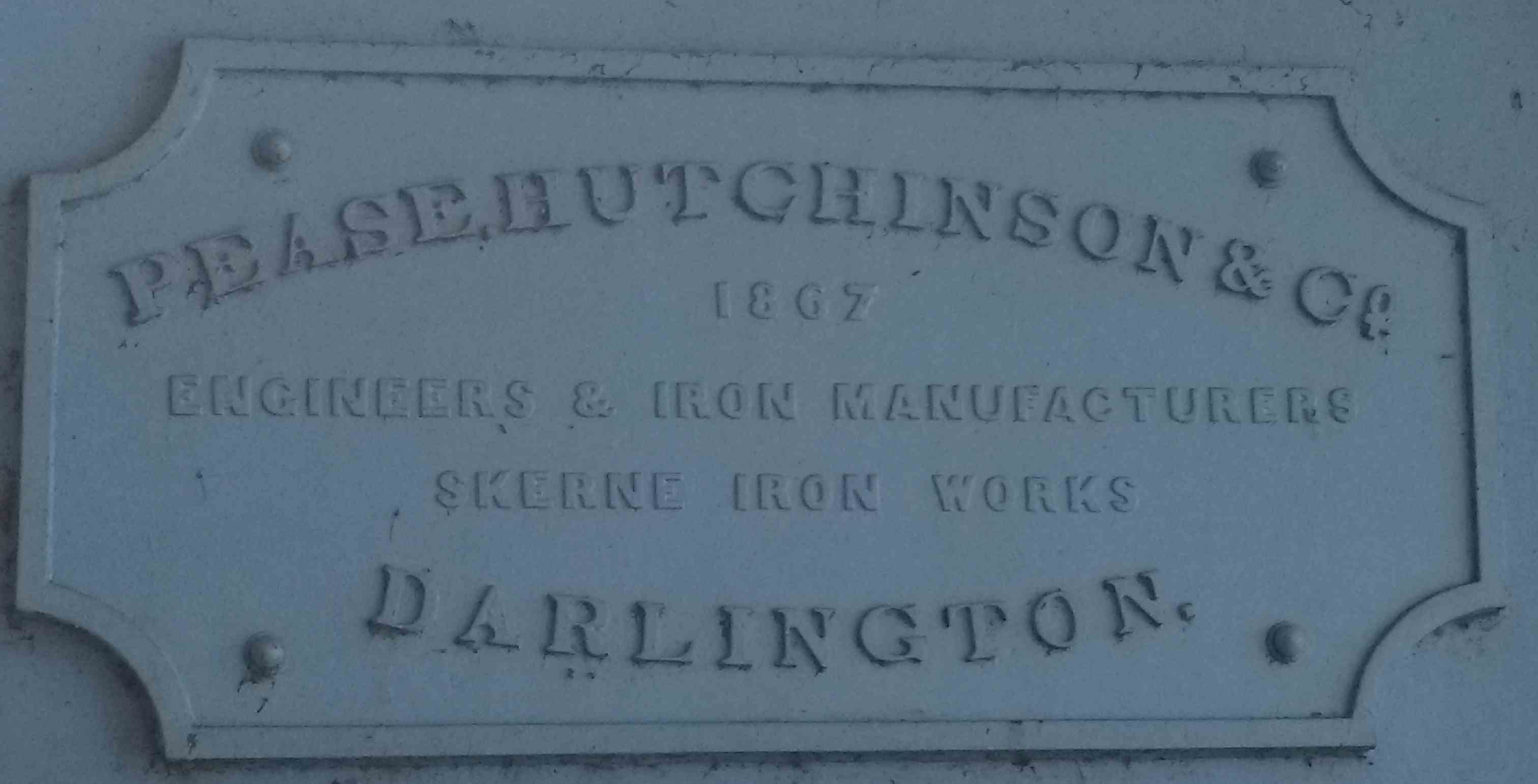 The tender accepted was that of Messrs. Pease, Hutchinson, and Co., of the Skerne Ironworks, Darlington, and 32, Coleman-street, London, whose estimate was £2,520;  and premiums were awarded for the two next best designs, those of Messrs. Peto and Co. and Mr John Pinchbeck, of London.
The bridge, of which we give a perspective view is 335 ft. long over all, while its length between abutments is 300 ft.  The clear width of the roadway is 20 ft., and the height of the bridge at the centre from the bed of the river to the top of the handrail, is 30 ft.  The bridge has a rise towards the centre of 2 ft. 6 in.  The superstructure consists of a wrought iron continuous girder supported at intervals of 40 ft. upon piers formed of iron piles.  The main girders are 3 ft. 6 in. deep, with webs 5/16 in. thick, and top and bottom flanges 12 in. by 5/8 in.  The flanges of each girder are joined to the web by pairs of 3 in. by 3 in. by ½ in. angle irons.  The girders are firmly bolted to the three centre piers, and rest on the remainder on expansion rollers.  They also rest on expansion rollers at the two abutments.  Ornamental cast-iron brackets are introduced at the angles formed by the piers and girders, as represented in Fig. 2 -
The transverse girders, which are placed 6 ft. 8 in. apart from centre to centre, are of wrought iron, 14 in. deep, with ¼ in. webs, and top and bottom flanges, each formed of a pair of 3½ in. by 3½ in. angle irons. 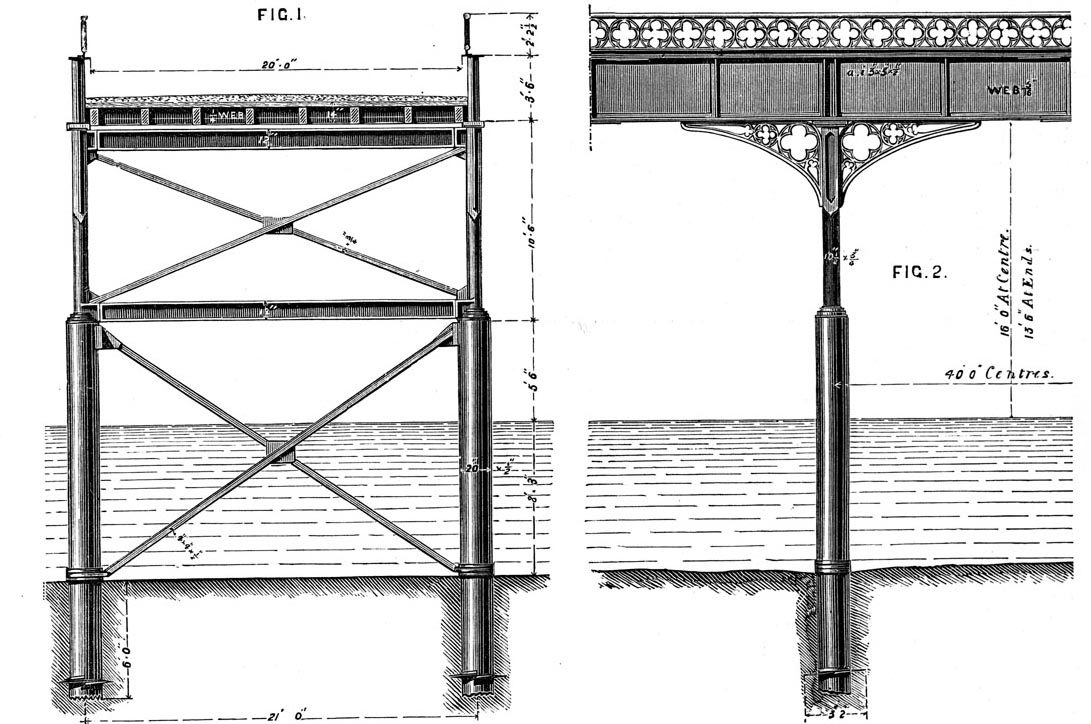 The platform is of Memel planking, 3 in. thick, carried by short longitudinal beams, 11 in. deep by 5½ in. thick, the ends of which are inserted between the flanges of the transverse girders.  The platform was covered with a thick coat of asphalte before the metalling was put on.
The abutments are of red brick, with ashlar caps and string course.  Their face walls are 3 ft., and the wing walls 2 ft., thick at the top, with a batter of 1 in 8.  The piers are each composed of two screw piles, as shown in Figs. 1 and 2.  In order to guard against the action of ice, &c., the lower portion of each pile, up to about 5 ft. above the water level, is made of wrought iron plate ½ in. thick.  This lower portion of each pile is 1 ft. 8 in. in diameter outside, and it is filled in with concrete.  The upper portion of each pile, which is of cast iron, is 10½ in. in diameter and ¾ in. thick.  The transverse girders connecting the piles are 12 in. deep, and the cross bracing of the lower portions of the piles consists of 4 in. by ½ in. angle irons, and that of the upper portions of flat bars 4 in. by ¾ in.  The piles are screwed down into the bed of the river to depths of from 6 ft. to 10 ft.
The contract price for the bridge was, as we have already stated, £2,520, a remarkably low one for the work done, and only explicable from the fact of the contractors being large iron manufacturers as well as extensive bridge builders.  There were no extras charged and the amount above mentioned included the iron, brick, stone, and timber work, the excavation, labour, erection, carriage, &c.;  in fact, the cost of the whole bridge, complete as it now stands, in addition to the removal of the old structure, which it replaced.  The work was quickly and successfully carried out under the superintendence of Mr. W. G. Fossick,  Mr. William Atkinson, C.E., of Westminster, acting as the representative of the Cookham Bridge Company. 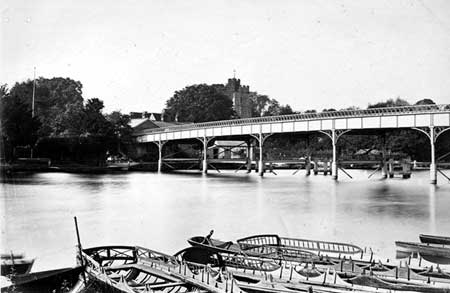 1883: QUERY! Henry Taunt, described as Cookham Bridge 1883 but I think there must be a mistake?

One or two real Venetian gondolas are kept at that river-reach where we spent our summer.
The owner of the principal one is an English nobleman who lived long in Italy and whose twelve daughters were born there. It is a sight to see those twelve beautiful sisters, from six years of age to twenty-four, poled down the river to church every Sunday morning by a swarthy and veritable Venetian gondolier.
Whether or not that hearse-like craft has sacred associations in the minds of the twelve maidens all in a row, or whether its grimness and want of swiftness seem out of place amid the carnival brilliancy of Sunday afternoon, it is certain that it is never used except for church-going, and the maidens appear later in the day each in her own swift little canoe, or two or three sisters together in a larger one, darting to and fro, hither and yon, with almost incredible swiftness, almost more like winged thoughts than like even swallows on the wing.
The gabled and ivy-wreathed Elizabethan manor-house which is the summer home of the maidens stands but a few rods from the river's bank. Here, amidst decorous shrubbery, upon smooth shaven and rolled turf, where marble vases overflow with gorgeous flowers, sit Pater and Mater among their dozens of guests.
Some of the gentlemen are in correct morning dress, some in boating-costumes, and some in that last stage of unclothedness or first of clothedness which is the English bathing-dress. In their striped tights on land these last look exactly like saw-dust and rope ring clowns, but when they dive into the water from that well-bred lawn and dart in wild pursuit of the maidens, who beat them off with oars from climbing into the canoes, amid shouts of aquatic and terrestrial laughter, one would almost swear they were neither the clowns they looked a moment ago, nor yet the English gentlemen they really are, but fantastic mermen bent upon carrying earth-brides back with them into their cool native depths beneath the bright water. 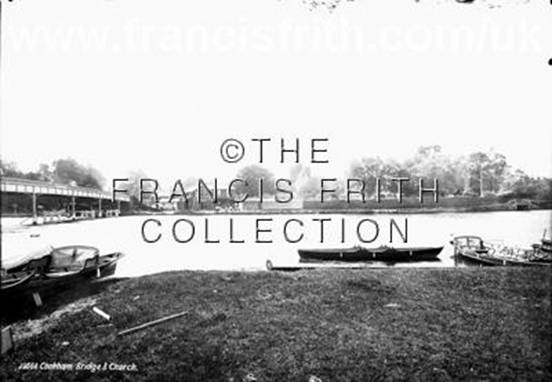 1992: Skyscan's Aerial View of Cookham Bridge in The Secret Thames - 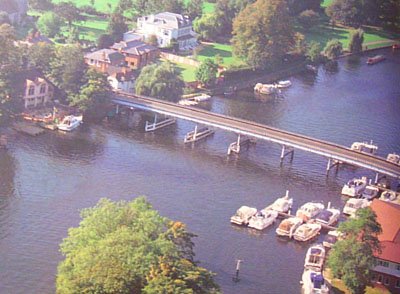 1920:  Fred Thacker, The Thames Highway:
"It has been described as the cheapest bridge on the river for its size. "
Fred had a devastating understated humour; he adds
"Its appearance is not unfavourable to the statement".
Ironically he goes on:
"But it is at least white"
1999:  Oh no its not! It's a terrible sort of depressing blue.  What is Cookham trying to say about itself?  Whatever it is I don't want to know!  Cookham is a lovely place. 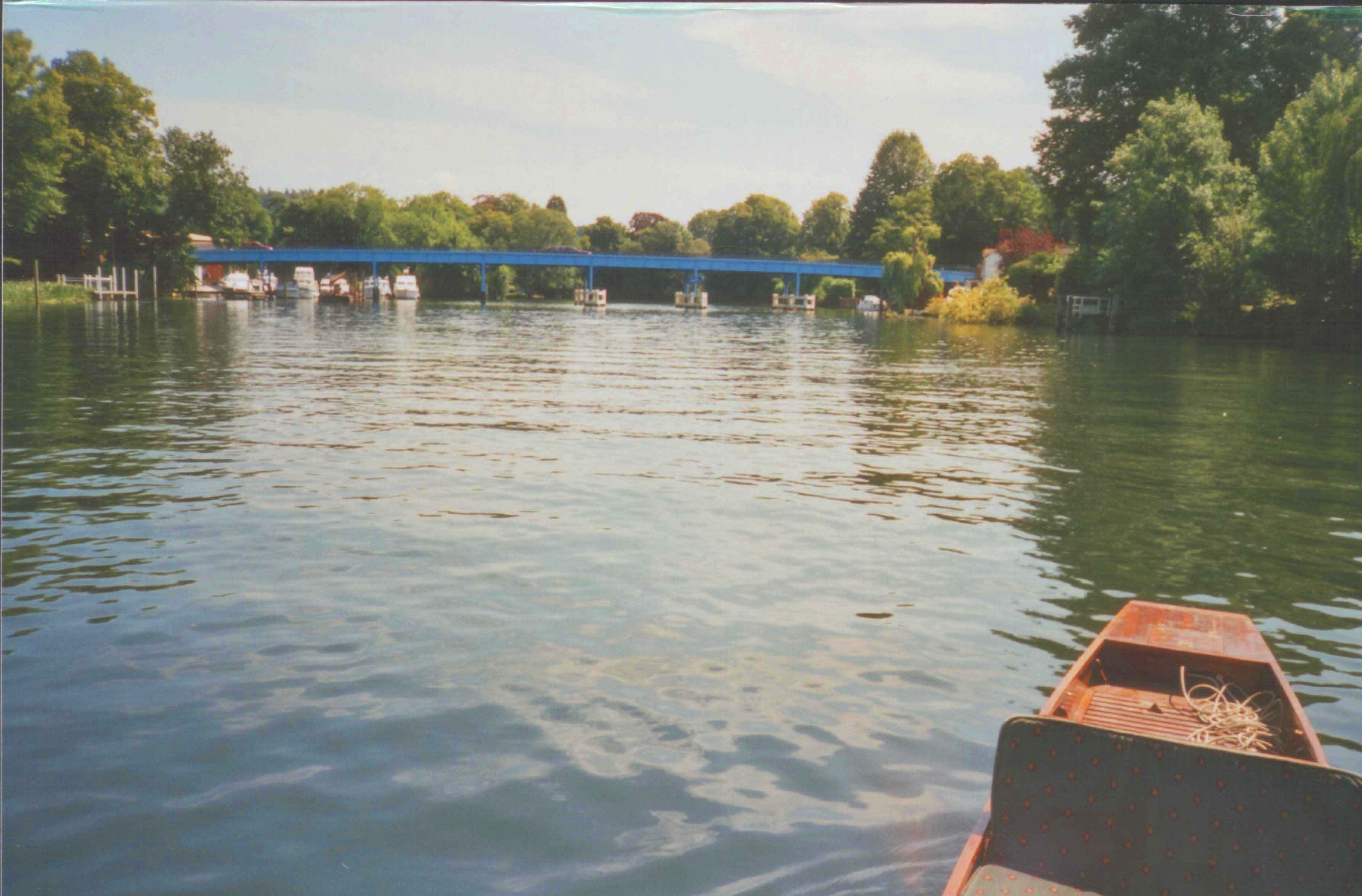 Cookham Bridge.
Don't look too closely! That blue might be subliminal. 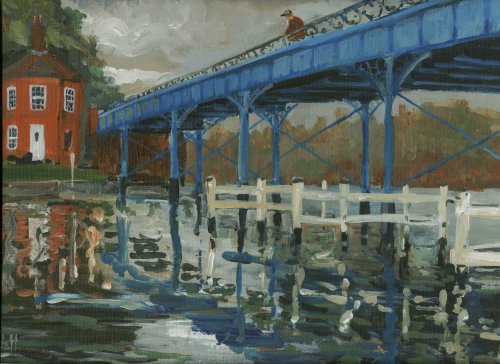 Timmy Mallett writes of his painting -

This is Cookham bridge over the Thames. There was a huge outcry when it was painted this bright blue. I think it's a great colour!
I once hit the pillars of this bridge in a hire boat! Don't ever ask me to steer......
Up on the bridge is my artist mate and fellow Cookham Wanderer, Stevie Smith, who painted the same view with me.
It was a grey old English day on the day we sat painting this but the reflections were wonderful - especially of the lovely orange red brick hexagonal toll house. 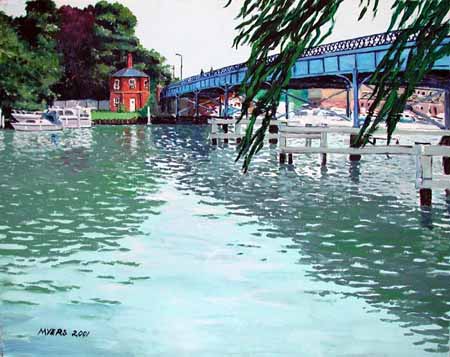 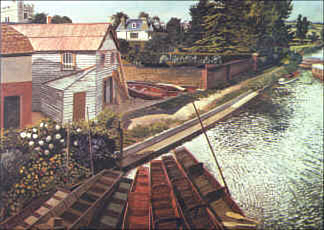