1895: Boulter's Lock, Sunday Afternoon, by E J Gregory
This is the great painting which is the theme of this page. It took ten years to complete - and in the process Gregory produced at least five studies which are shown here.
1995: The Thames Traditional Boat Society staged a recreation of the great painting which was photographed by Bob Lowery.
I show several amateur photographs of that event.
Then the 1995 recreation inspired the American painter Frank Wagner to produce his own version of Gregory's painting.
And finally my own humorous take on the great painting as a BOATING SAFETY POSTER 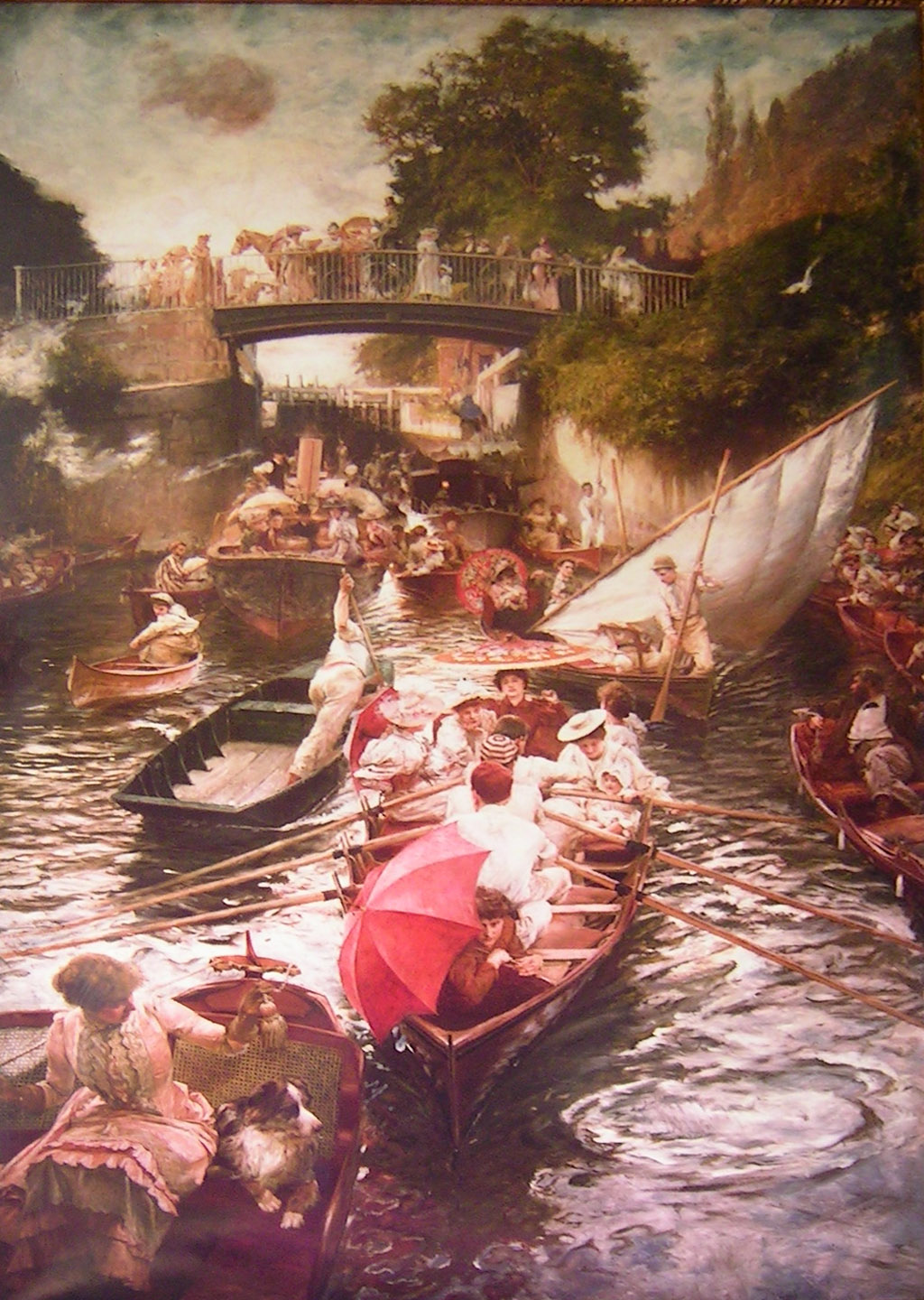 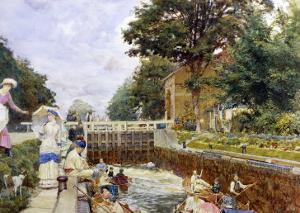 Boats going up Boulter's Lock,
the upper gates with the left paddle wide open making quite a disturbance

1995: One hundred years on, as part of the Maidenhead River pageant on June 24th, 1995, TTBS - Thames Traditional Boat Society members took part in the re-enactment of Gregory's picture. Obviously a great deal of work went into it and the result was very worthwhile.
It was photographed by Bob Lowery. I only have a black and white version of the photograph.
I think it succeeded admirably with the boats and costumes. 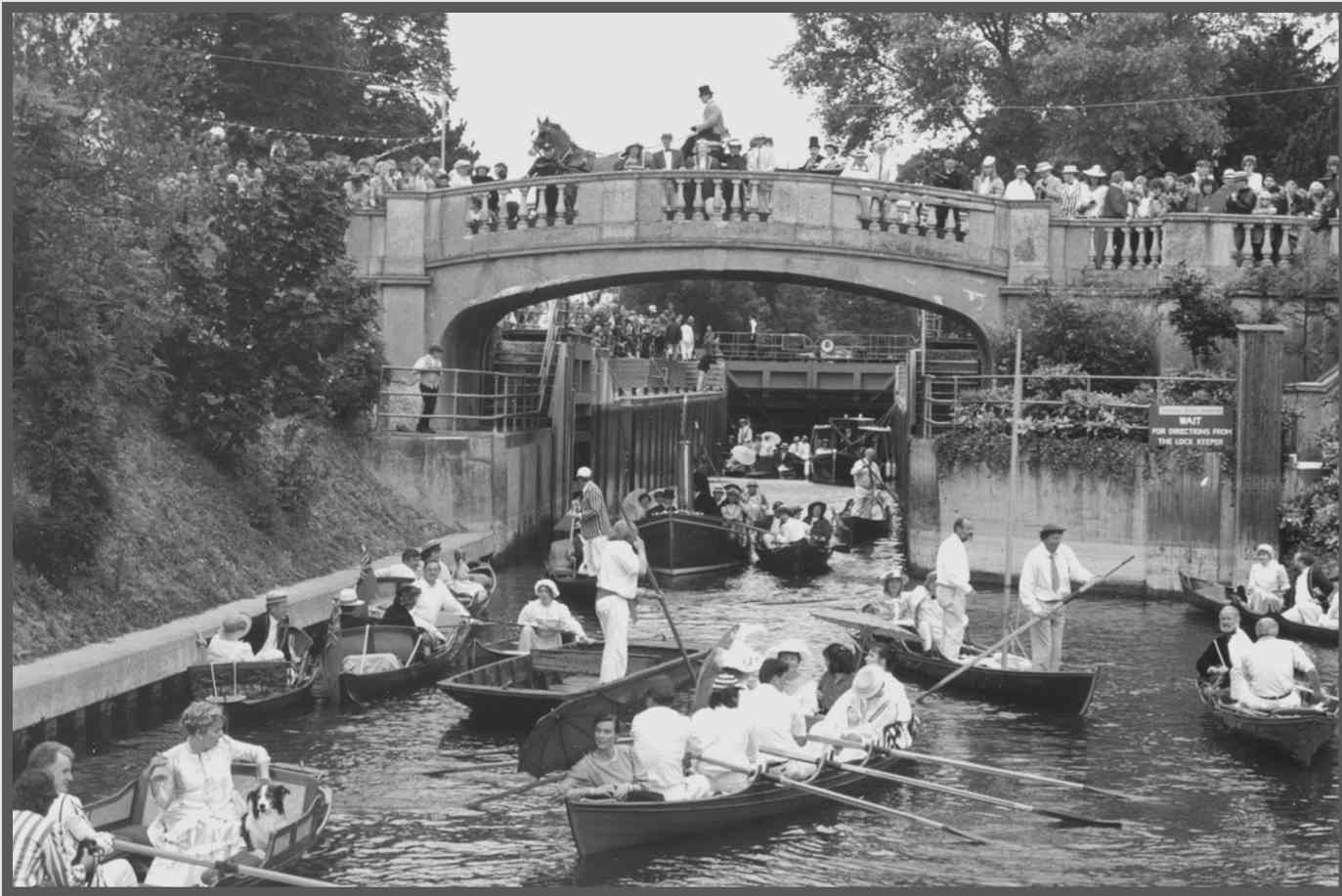 Bob Lowery is a specialist photographer who uses the very latest techniques to obtain great pictures for his clients particularly stately homes and commercial sites.
He carried out the photography for the re-enactment of Gregory’s famous picture at Boulters Lock in 1995. (He does not have a copy. If anyone has a colour version please share it)

Other photos from that occasion held by TTBS -

The 1995 recreation inspired the American painter Frank Wagner to produce his take on Gregory's 1895 painting: 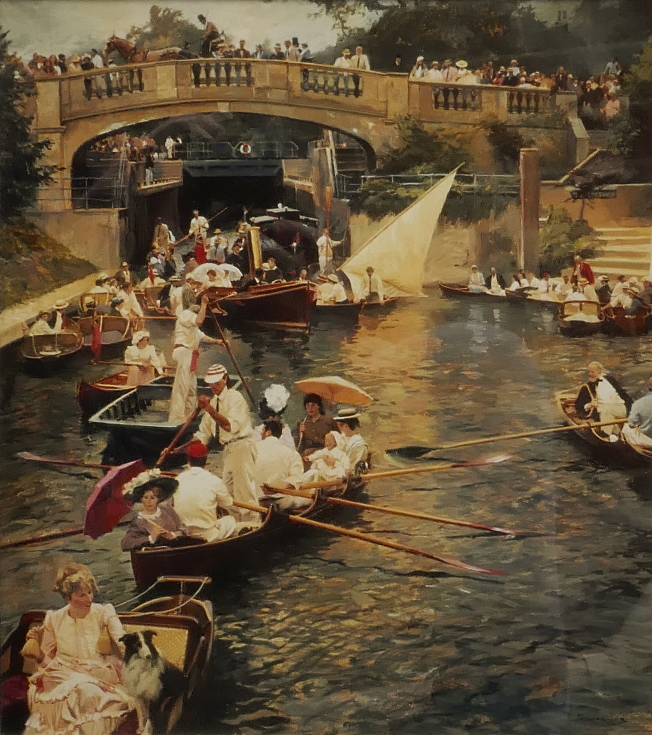 More light heartedly I have a theory that the great painting is basically a WATER SAFETY POSTER!
Look closely at the details -

A Safety Poster? – because so many things are about to go wrong – big time!
If only E J Gregory had waited just a few more seconds …
Because within moments the scene would have been very different - 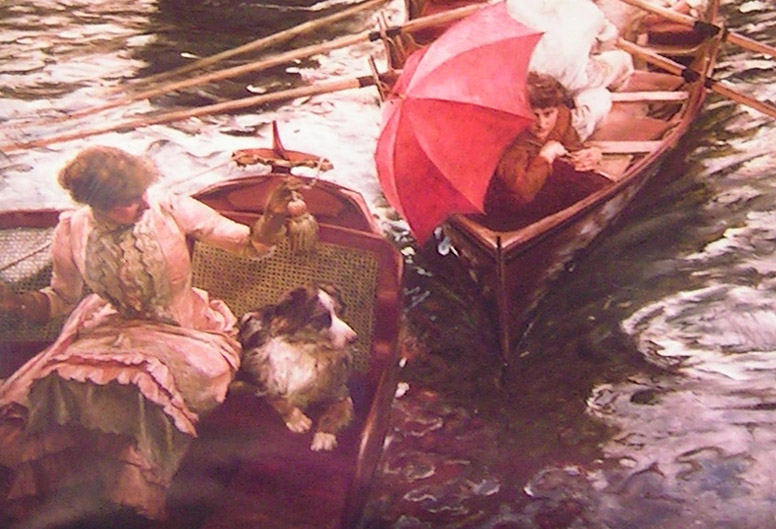 The lady cox of the skiff, bottom left, is paying more attention to her dog than to where she is going. Her left hand is no longer pulling the rudder string.  The stern of her boat therefore moves to our right, sideswiping the skiff behind her. Smashing a scull and a thole, and unhinging her rudder.  The lady in the bows of that skiff with the umbrella, which prevents her cox from seeing where she is going, is, to be fair to her, actually keeping a lookout, but unfortunately on the wrong side.  The dog attacks her umbrella. 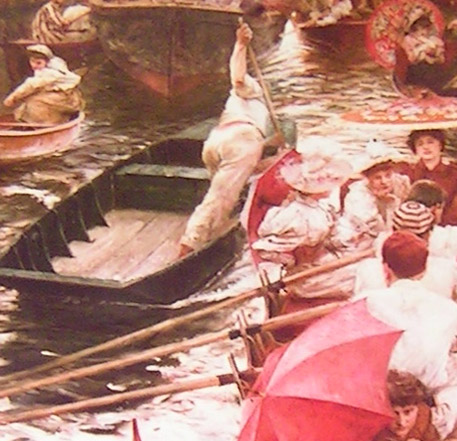 The punter is working hard and not looking, and nobody is looking at him to give warning, so he smashes into the sculls of the six oared skiff which is colliding with the skiff with the dog, breaking two more sculls and tholes. 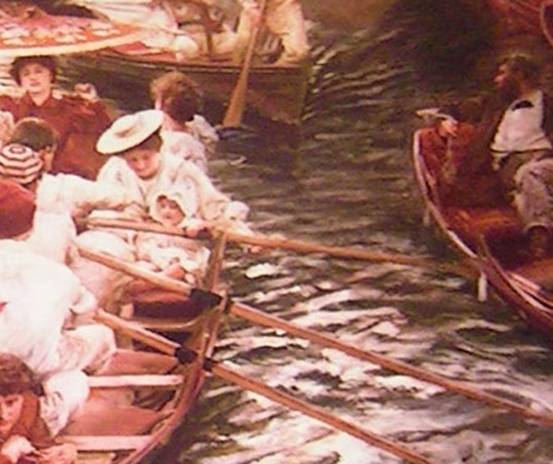 This distracts the first oarsman in the six oared skiff and he pushes out on his other scull which unfortunately is being held just inboard of the thole by the child.  She traps her fingers between scull and thole and screams loudly, causing nanny to say something quite emphatic.
His as yet undamaged scull hits the skiff in which the bearded man is lolling, breaking its thole and jumping out and striking the child.
[The bearded man is said to be E J Gregory himself.] 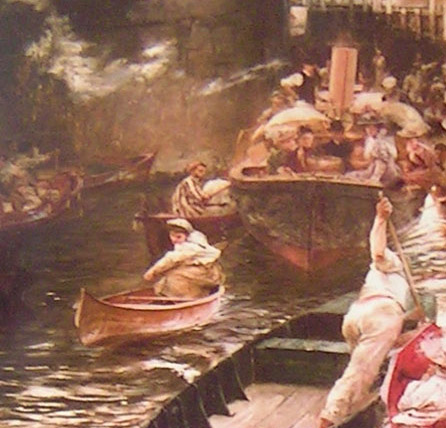 The steam launch behind the punt sees the punt hitting the two skiffs ahead of it and swerves to our left, running down the keen female in the canoe, hidden under the bows.
As it swerves the steam launch forces the boat to its left, holding on with a boat hook, into the boats waiting to go up the lock. 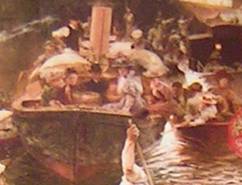 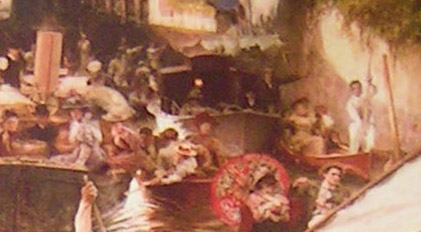 The launch further behind swerves the other way and smashes the canoe in front of it into the stone bank.  The man standing in the bows is thrown into the water. 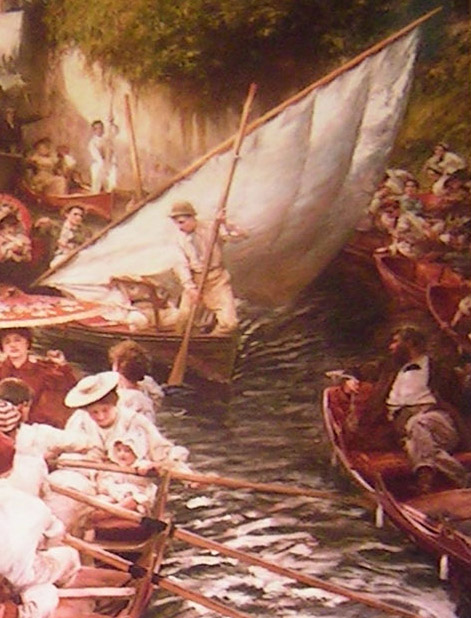 The bearded man lolling in the skiff on the right is rightly worried by the course of the skiff with the sail.  At this point it catches a puff of wind and smashes into his boat, snapping the mast and throwing the man in the bows upside down on top of him.
He first hits him with the oar
and then falls on top of him
and then they are both smothered by canvas.
The man sitting astride behind the mast, raising the sail, is thrown onto the splintered stump of the mast and suffers as only a man can. 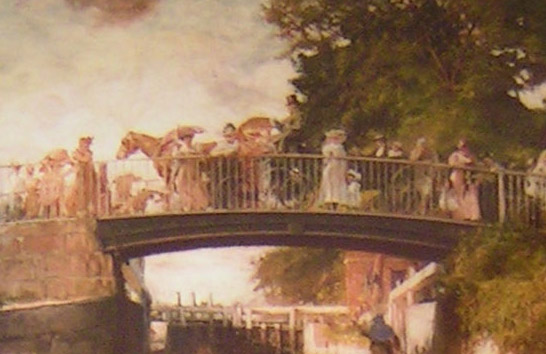 The coachman on the bridge hears the cries from the river and looks to see what is happening, steering too far to his left and crushing the back wheel of the bicycle.


As I say – Edward J Gregory might have been a good artist – but he lacked timing - if only he had waited – what a picture that would have made! It took him seven years to complete that painting - and he only missed by a few seconds!

'Boulters Lock, Sunday Afternoon' © David Wheldon (after seeing the above)

Boulter’s Lock, Sunday afternoon, Maidenhead;
I’ve never been there myself, and anyway am too late.
A hundred years ago, or more: all in the painting
are dead. The hurry, the crowdedness within
the damp lock’s walls and gates. Skiff, punt, canoe,
steam launch: all vying for the exit, down into
the broader waters of the Thames. Paintings
like this limn the lady-cox with her fingers
holding the tiller-tassels, while the male sculls
maintain her way. Maybe they got down to Bray.

But it was outside Boulters Lock, on the way back to Cookham, that we found the greatest crowd. There was such a mass of boats one might have thought all -

The men who haunt the waters,
Broad of breast and brown of hue,
All of beauty's youngest daughters,
Perched in punt or crank canoe.

were waiting to pass through together. But presently the lock-keeper called out,
"Keep back! There are a lot of boats coming!"
And the lock gates slowly opened and out they came, pell-mell, pushing, paddling, poling, steaming, and there was a great scrambling and bumping, and meeting of friends, and cries of
"How are you?"
"Come to dinner at eight"
"Look out where you're going!"
and brandishing of boathooks, and glaring of eyes, and savage shoutings, and frantic handshakings, and scrunching of boats, and scratching of paint, and somehow we all made our way into the lock as best we could, the lock-keeper helping the slower boats with his long boathook and fitting all in, until there was not space for one to capsize if it would. But indeed in a crowded lock if you cannot manage your own boat some one else will manage it for you; and for that matter, when there is no crowd you meet men whose only use of a boathook is to dig it into your boat as you are quietly making your way out.
Both banks were lined with people looking on, for Boulter's Lock on Sunday afternoon is one of the sights of the Thames.

The aspen grows on the maiden’s bank,
Down swoops the breeze on the bough,
Quick rose the gust, and suddenly sank,
Like wrath on my sweetheart’s brow.
The tree is caught, the boat dread nought,
Sheltered and safe below;
The bank is high, and the wind runs by,
Giving us leave to row.

The bank was dipping lower and lower,
Showing the glowing west,
The oar went slower, for either rower
The river was heaving her breast.
That sunset seemed to my dauntless steerer
The lifting and breaking of day,
That flush on the wave to me was dearer
Than shade on a windless way. 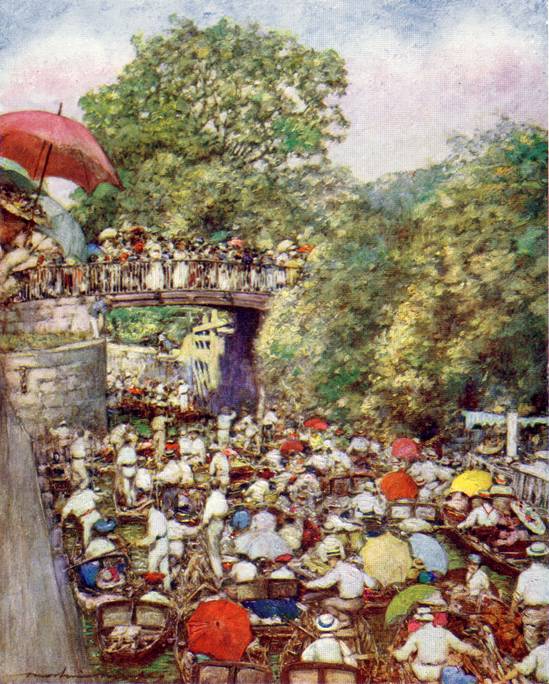 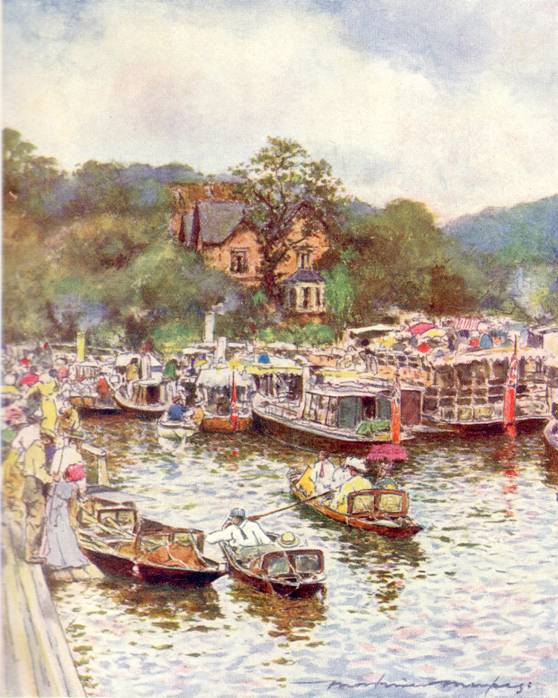 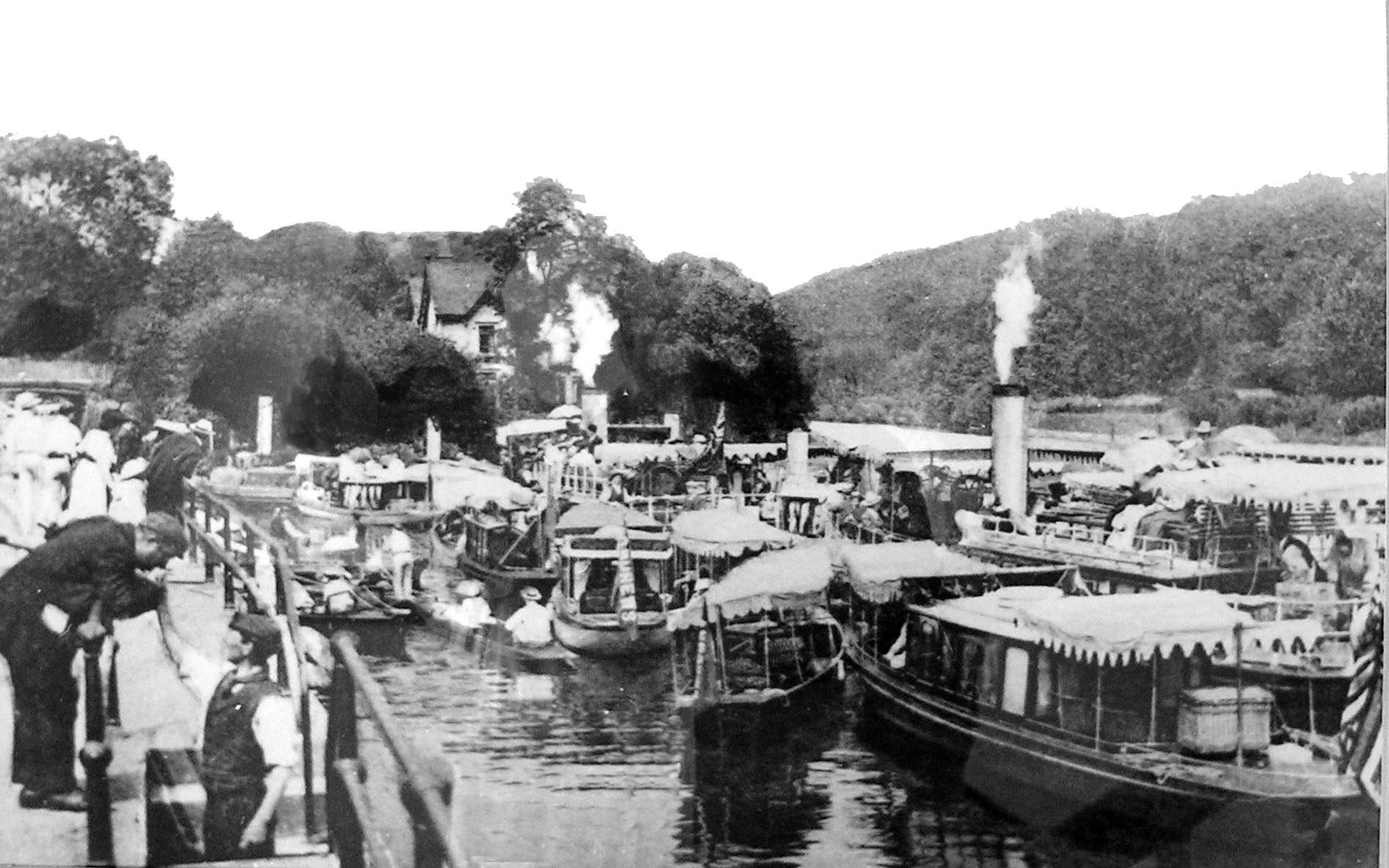 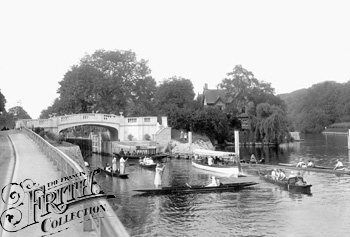 [ I am worried by the predicament of the nearest punt. What was she trying to do I ask? (104 years later!) She was a Cambridge punter (she is standing on the deck or till) and maybe out on a much bigger river than her home waters. (The Thames feels enormous for a punter used to the Cam and Granta). I take it she had just come down through the lock and was trying to turn to get up towards Boulter's Inn. But that steam launch appears to be reversing at speed (those are waves under its stern aren't they?) and a collision involving the punt and the skiff and the steam launch appears inevitable. ] 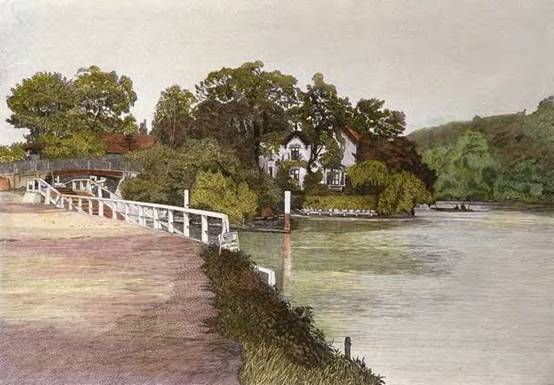 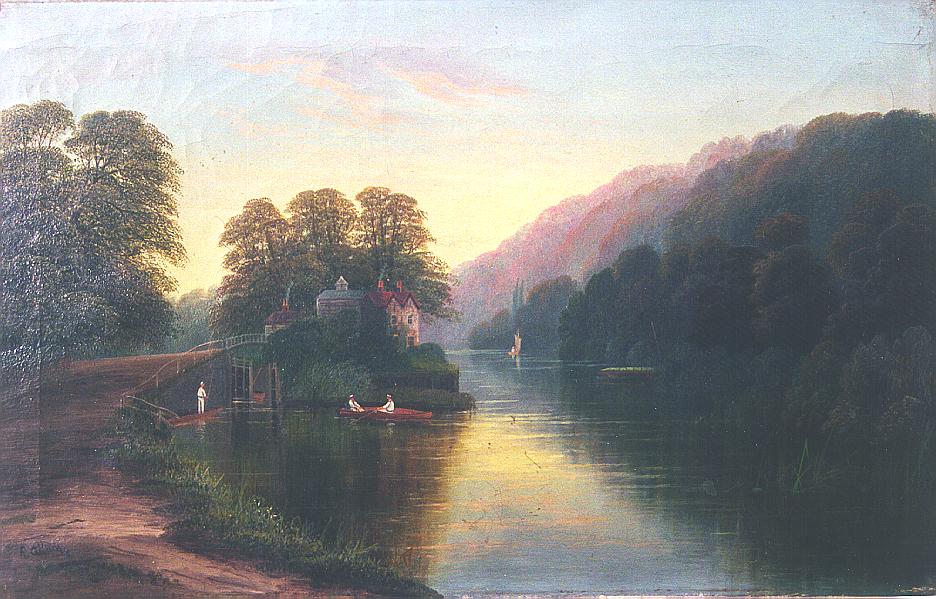