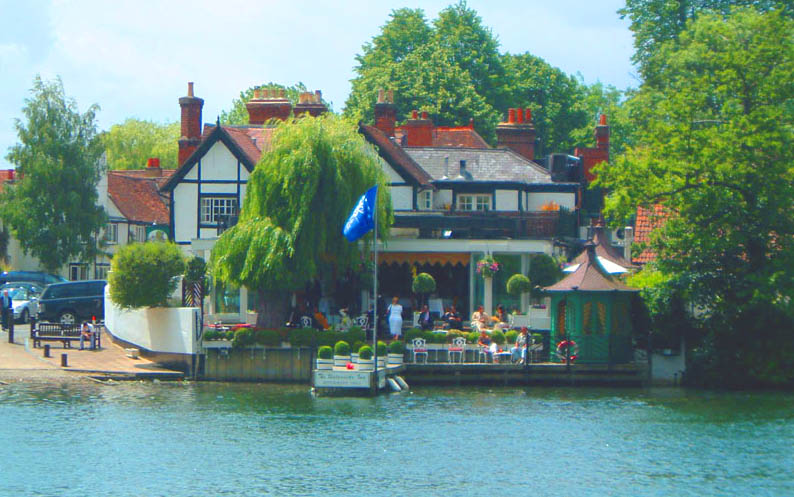 A history of Bray

... ancient and picturesque Bray. The fine poplars, the eel-bucks, the osier beds and the grey old tower of the church are well known to all frequenters of the Thames.
At the ferry is the old "George" Inn, from which the place goups most picturesquely.
[ He goes on at some length about the Vicar of Bray - see Bray Lock. Then he visits the Church and the Almshouses and the manor house of Ockwells ]
Bray, and the beautiful country which lies above it by the river, have attracted many to build their houses near the banks, and, as the oarsman goes forward, and sees these delightful green lawns, where the turf is like velvet, and the flower beds are glorious, the fires of envy may, sometimes permissibly, arise in his breast.

The slipway is well maintained - though 'big brother' has clearly placed the bollards so as to constrain the size of boat launched here - and there is no parking!

On the right of the slipway used to be a boatyard, Messums, which was famous for its punts. This was the base for the Bray Punt Regatta. It is said that one could walk from Berkshire to Buckinghamshire dry shod on the punts moored across the River.
This is all now residential development.
There is a free village car park a few hundred yards away - but what attitude there would be to a trailer taking up an additional space is not known.  In any case in the summer there is no doubt that early arrival here would be desirable.
There does not appear to be a corresponding ferry landing on the other side though it is said that there was a ferry on a rope here. Fred Thacker makes no mention of a ferry in 1920. However Dickens does in 1885. 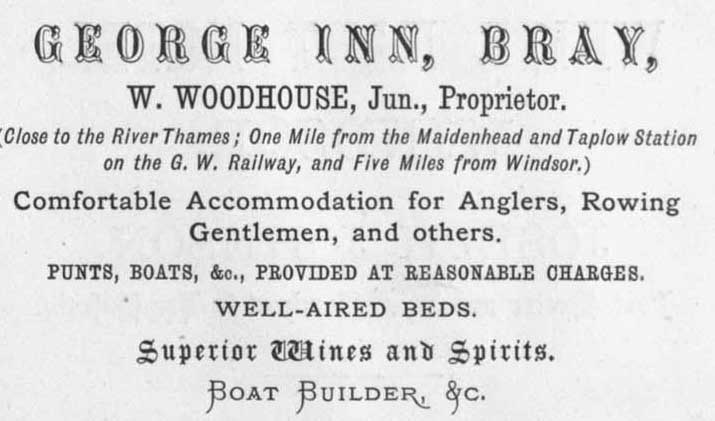 And what was once the George Inn, famous for its teas, is now the Waterside Inn, a hotel and restaurant, reservations only (if you need to ask you can't afford it!) Tariff
There are parking spaces reserved for clients only.
Lady Penelope Cobham, Chairman of 'Visit England' -

... for a special occasion, I head to The Waterside Inn at Bray in Berkshire. Under chef patron Albert Roux, the restaurant has been awarded three Michelin stars, but it’s idyllic setting on the River Thames is almost as fantastic as the food. 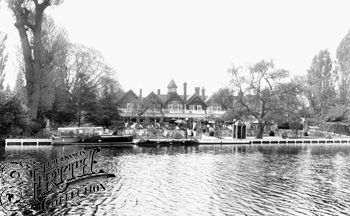