NB Ferry Lanes on both sides

The slipway is small and best suited to manually launched craft.
It can be seen in the Google view. No parking. There is no opposite slipway - the left bank ferry site is accessible from the track - but no public parking.

Once the largest reservoir in the world, the elevated Queen Mary Reservoir, just north of the M3 motorway, stores water from the River Thames and supplies western London and Surrey. It is a popular location for water sports.
Queen Mary was the first large reservoir completed by the Metropolitan Water Board, who assumed responsibility for London’s water supply in 1904. The non-impounding reservoir is raised some 12m above the surrounding area. Water is pumped into it from the Thames via the Laleham intake channel by Littleton Pumping Station at the western apex of the reservoir.
The embankment was damaged by World War II (1939-45) bombing. As the Metropolitan Water Board had taken the precaution of lowering all reservoir water levels by 1.5m at the outset of the war, no water was lost at this or any other similarly-damaged reservoir. Thames Water Authority (known as Thames Water after 1989) took over from the Metropolitan Water Board in 1974. Following a statutory inspection, in 2007 a safety recommendation was made to increase the emergency draw-down capacity of the reservoir significantly — to achieve 750mm emergency draw down from top water level within 24 hours. This was done by installing twin siphon pipes fitted with submerged discharge valves in stilling chambers, which release water into Laleham Aqueduct west of the original pumping station. Each computer-operated valve is 13m tall with an internal diameter of 1.6m, weighs more than 22 tonnes and has a flow rate of 13,000 litres per second. The 1.6m bore welded steel pipes between the valves and the aqueduct are each some 250m long. Historically, aggregates have been dredged from the bottom of the reservoir, resulting in an uneven bed. Thames Water wanted to improve water circulation, so the reservoir and underlying ground were digitally modelled to locate suitable extraction areas. In 2008, planning approval was granted for the outer two thirds of the baffle to be removed and 1.25 million tonnes of sand and gravel to be extracted, increasing reservoir capacity by 1.26 percent. The dredging arisings were transferred to a stockpile west of the reservoir by conveyor for recycling. Dredging will continue until the end of 2013 and the material will be processed until the end of 2033, after which the site will be restored and landscaped. The land to the west of the reservoir and the reservoir itself are designated Sites of Nature Conservation Importance, covering some 360ha and noted for their varied bird life. The reservoir is not open to the public, though a sailing club (founded in 1972) uses it for wind-based water sports. The UK’s largest inland dinghy race — the Bloody Mary pursuit race — has been held here since 1973.

LALEHAM, on the Middlesex Side of the River, is a Place of but little Account, chiefly inhabited by Fishermen; who, would they but abstain as much from Fishing illegally amongst themselves, as they seem willing to prevent Foreigners coming up hereabouts to do so, there would certainly be a much greater Quantity of, and better Fish, than what there is in these Parts at present.

1805: The Traveller's Guide: Or, English Itinerary: By Walley Chamberlain Oulton

LALEHAM dist. from Staines 2 miles, is famous for the entertainment it affords to the lovers of angling. The Thames narrows considerably here; and, about the shallows or gulls, the water is beautifully transparent. The tranquillity of the scenery, the various objects gliding on the stream, and groups of cattle in the adjacent meadows, present a pleasing subject to the contemplative mind.

... road and tow-path run together beside Laleham Park towards Chertsey Bridge, the Surrey bank [ right ] being fringed by willow copses, much sort for floating flirtations and picnic teas.

( In joyaunce of June, how the time flies away
How bright, but how brief is the long summer day ! )

THE stream runs fleet, the air is sweet,
The clouds almost bereft of blushes ;
The balmy breeze scarce stirs the trees,
And fails to bend the reeds and rushes,
And as we glide at eventide -
How sweet the voice of passing maiden !
The roar of weir now far, now near
The laughter in the punt, lass-laden !
The tender song that cheers along,
The brown-faced sculler in the wherry ! -
Gone is the sun, the day is done
At Laleham Ferry !

We drift away, as fades the day
The oars in the twilight shimmer -
The night draws nigh, the dappled sky
Is ev'ry moment growing dimmer
While glinting bright, some village light
Is gleaming gladly in the gloaming.
The boat's made fast, we land at last,
And bid adieu to River-roaming !
The trip is o'er, we step ashore -
With feelings the reverse of merry -
And with a sigh, we say good-bye
At Laleham Ferry !

The former Laleham Abbey, originally known as Laleham House, was built for the Earl of Lucan between 1803 and 1806.
1829: The Mirror of Literature, Amusement, and Instruction, Laleham Park -

Circumstances, in themselves trivial, often confer celebrity upon places hitherto of unlettered note. Thus, a beautiful villa at Laleham, a village in Middlesex, eighteen and a half miles south west of London, has acquired frequent passing notice from its having lately become the temporary residence of the young Queen of Portugal, whose removal to England appears to have been a prudent measure to keep her petite Majesty "out of harm's way."
Laleham is delightfully situate on the banks of the Thames, between Shepperton and Staines, and is famed for the entertainment it affords to the lovers of angling. The river narrows considerably here; and about the shallows, or gulls, the water is beautifully transparent. The above temporary royal residence is built in an elegant villa style; and the grounds have been very tastefully laid out under the immediate direction of the present proprietor, the Earl of Lucan. They comprise 40 acres, with some very fine elm timber. The "Young Queen" is described as an interesting and lively child, and is within a month of the same age as the Princess Victoria, and Prince George of Cumberland, both of whom were born in May, 1819. She has not the slightest tinge of a tropical complexion; her hair is extremely light, her face pale, her eyes light blue and very sparkling. She is not tall of her age, but remarkably well formed. Her Majesty arrived in London in October last, and for some time resided at Grillon's Hotel, Albemarle Street; but her health requiring change of air, Laleham was engaged for a short period; although, in allusion to the situation, it was said to be very low - a flat joke indeed.
In this delightful retreat, the young Queen and her suite at present reside; and so pacific is our taste, that to enjoy the tranquil scenery  of Laleham, and the sports of the stream that waters its park, we would willingly forego all the cares of state, and leave its plots and counterplots to more ambitious minds.

When the Lucan family left the village, the 70 acres of Abbey grounds were given for public use and now form Laleham Park

It was painfull to me to see the rugged state of the towing path, so dreadfully broken in, in places where the poor horses go in the water belly deep.  The stream running over the shallows, not being in flood, at the rate of 4½  miles an hour. 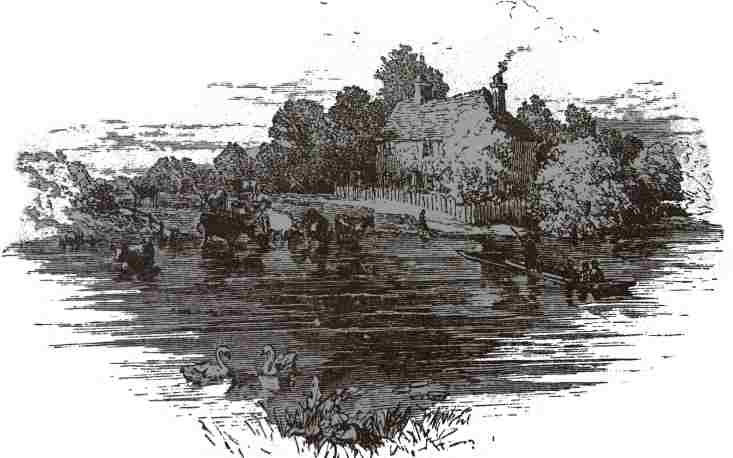 From Penty-Hook there is nothing to interest the voyager until he reaches the pretty Ferry at Laleham. He may, if he pleases, step ashore at the clean and neat ferry-house here pictured, and either dine on the bank, or in one of the small rooms, to which access is readily obtained. In any case, he will do well to look about him. The steeple of a church adds its eloquent grace to a pleasing although flat landscape: it is the church at Laleham. On the opposite side is the square tower of Chertsey Church. Cattle are feeding on the luxuriant grass in Chertsey Mead, or cooling themselves in the shallow stream; the ferryboat is conveying foot passengers only, for the river here is not deep, and a mounted traveller may cross it, swimming merely the small "bit" that forms the channel of the barges. Rising just above him is St. Anne's Hill — so long the happy and quiet home of Charles James Fox, and now the property of his descendant, Lord Holland. Looking eastward, he has in view the wooded rise of Woburn, and further on that of Oatlands. 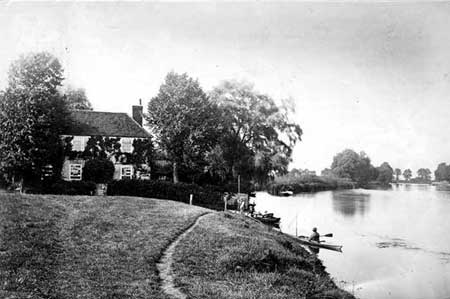 Below Penton Hook at Laleham there is an old-fashioned house, on the tow-path side, with garden enclosed by a fine old red-brick wall;  and I liked it perhaps all the better, as out of a little green back gate, three pretty girls without their hats came running down to their boat as I was passing.

... quiet old Laleham, with a notable ferry, Laleham House below it, a plain, square mansion, the seat of the Earl of Lucan ...
The broad meadows hereabout, with the river flowing placidly by, do not claim to be picturesque, but, under changing effects of light, and with great cloud shadows sweeping across field and river, they have a characteristic attractiveness of their own.
Arnold, who lived at Laleham for some years before he removed to Rugby, thought the place "very beautiful". He found abundant resources in the bank up to Staines, which, he said,
"though it is perfectly flat, has yet a great charm from its entire loneliness, there not being a house anywhere near it; and the river has none of that stir of boats and barges upon it, which makes it in many places as public as the high road."
Laleham itself, with its old-fashioned red-roofed cottages, is a pleasant place to pause at. There is Arnold's house, where he spent the years which he thought the happiest of his life, and which he continued to regard with affection, and the churchyard in which he hoped to be laid. 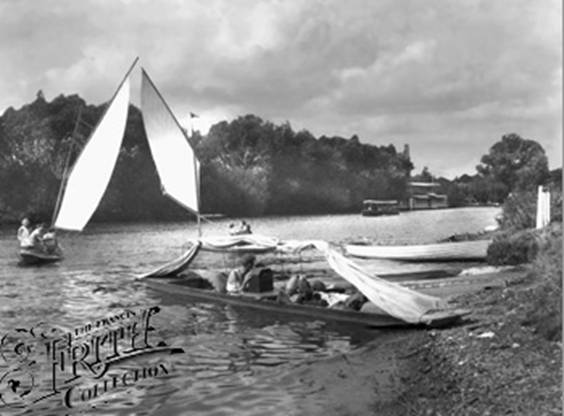