Right bank of cut, between Cut and Old River 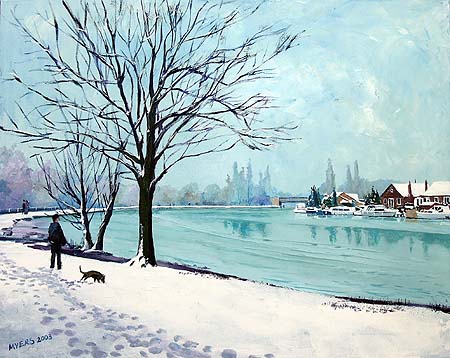 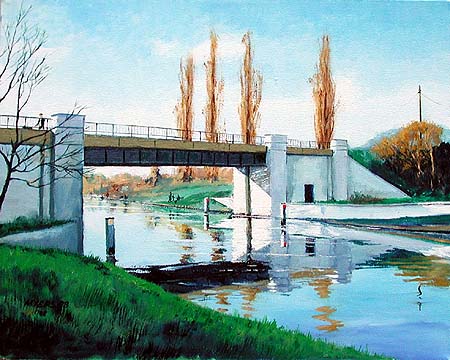 The Desborough Cut was proposed in 1930 to cope with the increased flow resulting from the River Wey Drainage Scheme.
1930: A Survey of the river, Putney to Staines, with Suggestions for the Preservation of its Amenities, prepared for the Middlesex amd Surrey County Councils by Adams, Thompson and Fry, Town Planning Consultants:

The proposal of greatest moment is that which concerns the cutting of a new direct channel, from the bend of the river below D'Oyly Carte Island to a point, a little downstream from the West Surrey Waterworks.
We understand that this channel is to be about one third the width and capacity of the river, so that in normal conditions of flow it will carry away only one third of the total water. As in summer the river between locks has just sufficient flow to prevent stagnation, there is little chance that the new channel will be the cause of silting up in the present channel. Indeed it seems that such silting is bound to take place under normal conditions and that is part of the work of the Thames Conservators to dredge the river periodically at all points to prevent undue silting.
In flood time the new channel will act as increased capacity owing to its shorter length (when compared with the wide circuit of the river) given its increased velocity of flow, the level of both river and channel being level when they meet again. Tugs and barges will, no doubt, prefer to use the new channel rather than the winding river, so that in a certain sense it will act as a bye-pass to heavy traffic.
It is to be hoped that the Thames Conservancy Board will include in their purchase of land a wide strip of meadow on each side, and they be induced to do this as a means of preserving amenity - otherwise the cutting of the channel will constitute a menace of first magnitude to the character of the river in its immediate vicinity and, by natural contagion, over a much wider length in either direction. In any case the proposal if carried out is bound to affect the present appearance adversely.

1934: Both bridges built
Ironically, I was advised that punters should avoid the Desborough Cut because it has vertical banks and wash builds up badly. I say 'ironically' because the cut is named after that same Lord Desborough (W.H.Grenfell) who was the amateur punting champion who lived near Boulters – and what he would say, to having the part of the Thames named after him denied to punters, I shudder to think – for he was a forthright man.

The Evening News: (on his election to Parliament)-

His broad, level brow beneath curling light hair, his straight, but not classic nose, his clear, far-seeing eyes, are typically English. His strong neck rises from a pair of broad, supple shoulders, and his arms are as massive as those of some hero of the classic sculptures.

HOWEVER amongst the options for flood prevention in this part of the river is a proposal to increase the capacity of the Desborough Channel by dredging and making the banks a more natural shape. So, maybe, he won't have to rise up and haunt us after all!

Of Lord Desborough to the present generation it is not necessary to say anything; but, in the fond hope that this volume may reach the eyes of some in years to come, it is added that to Lord Desborough, formerly Mr. W.H.Grenfell, Chairman of the Thames Conservancy for many years, perhaps the very finest oarsman, swimmer, and punter of his generation, to say nothing of his excellence in many other athletic pursuits, all users of the river Thames owe an immense debt of gratitude. He has been their champion and the river's friend also; and his championship has been the more effectual in that all men knew that no man understood better the needs of the river and of its frequenters.

[ It does feel good to grant somebody's "fond hope"!
Indeed I can now offer you a chance to take part in remembering Lord Desborough.
The (as yet unpublished) book 'Titan of the Thames, the life of Lord Desborough' by Sandy Nairn and Peter Williams is being CROWD FUNDED so you can contribute - see https://unbound.com/titan/ ]