A public park on left bank below bridge.

The "tail" of land on the River Thames. In 1935 the land was opened as a public park. Its name comes from a houseboat called "Cigarette" that used to be moored here. It is not strictly an island being bounded by the Thames and the River Mole and on the third side by Hampton Court Railway Station.

the bridge at the Toy, near Hampton-Court, being much decayed, some trees were wanted for the repairs that were fifty feet long without bough, and would measure twelve inches diameter at the little end …
[ Fred Thacker in 1920 commented that this was almost certainly for the first building, not repair, of the bridge] 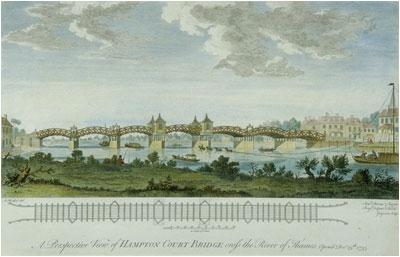 HAMPTON Town has several very good Houses, a Free-school, and a Ferry to Moulsey Heath, or Hurst, famous for Cricket Matches, it being a beautiful, extensive, flat, and level Piece of Ground, or Common. 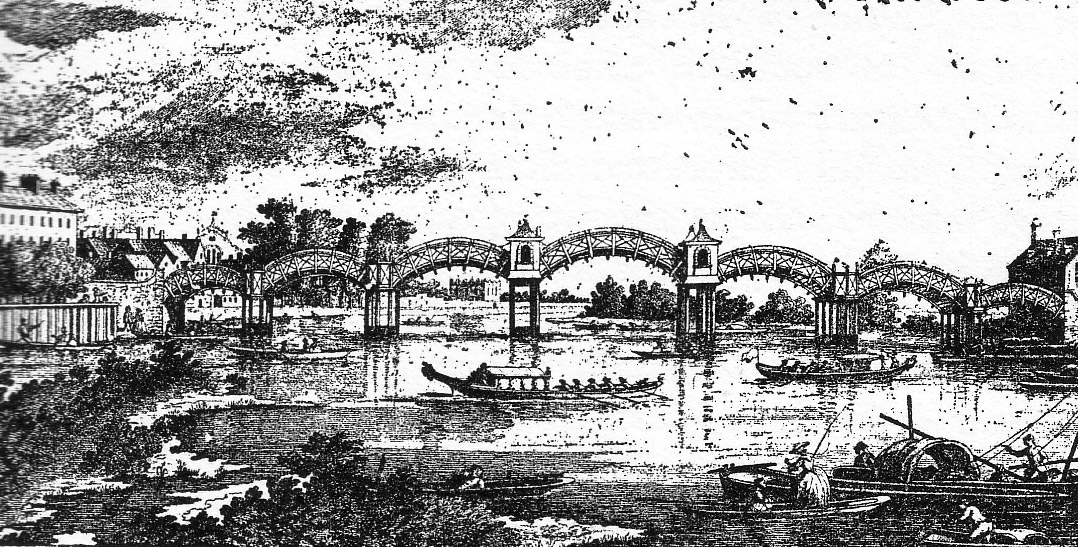 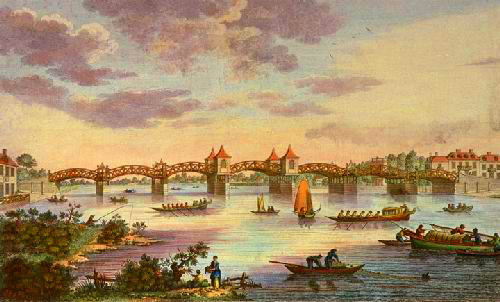 This [first bridge(1753-1778)] is a most beautiful and picturesque structure: the part which spans the river is constructed of timber, but the two abutments are built of stone: it furnishes a pleasing apearance in perspective from the adjoining shores of the river. The length is five hundred feet, and has seven arcs. The piers are cases of timber filled with stone. Barges of one hundred tons burthen pass through this bridge, by lowering down their masts; they are most commonly dragged by horses, which, on account of the shallow depth of water at certain times of the tide, are permitted to wade up the stream.

[The accompanying illustration is a drawing of the first bridge(1753-1788) in the above print of 1753, together with a cross section]

1778: The first bridge proved flimsy (no doubt the undulating design was not terribly functional for day to day use) and was rebuilt. 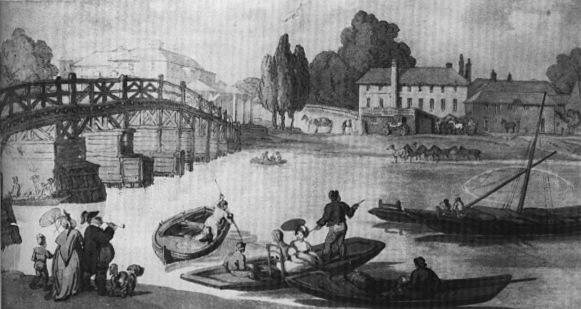 1802: Picturesque Views on the River Thames, By Samuel Ireland -

FROM Hampton, the approach to the bridge presents a favourable association of objects for the pencil. The west end of the old building, formerly the banqueting house, breaks happily on the eye to complete the scene, and it is from that point of view only that this majestic pile can be introduced into the landscape to advantage.
HAMPTON COURT bridge, which is of wood, has a light and pleasing effect, and was finished about twenty-five years since, under the direction of a Mr. White of Weybridge ; the former bridge was so ill constructed as only to remain fit for use about thirteen or fourteen years. 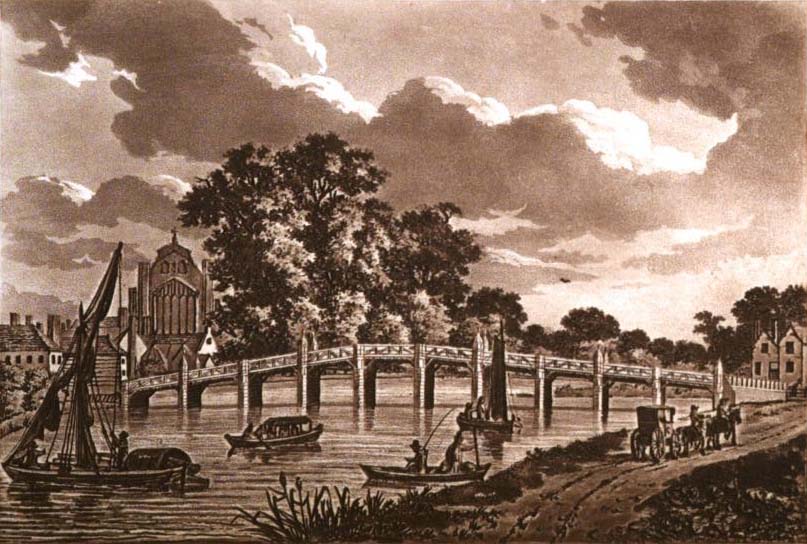 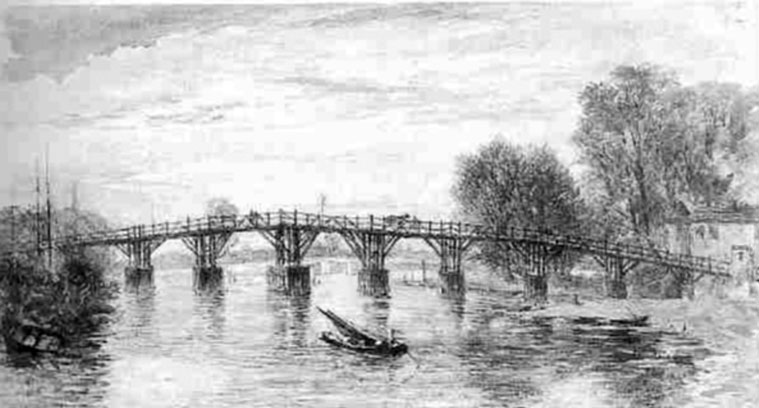 Here is a bridge over the Thames to East Moulsey, erected in pursuance of an Act of Parliament passed in 1750, in favour of James Clarke, then lessee of the ferry under the Crown.
It is a light wooden structure of eleven arches.

The first sentence refers to the first bridge (1753-1778).
Murray in 1845 was obviously quoting something written about that bridge - but his drawing shows the second bridge (1778-1866) which by my reckoning had ten arches. 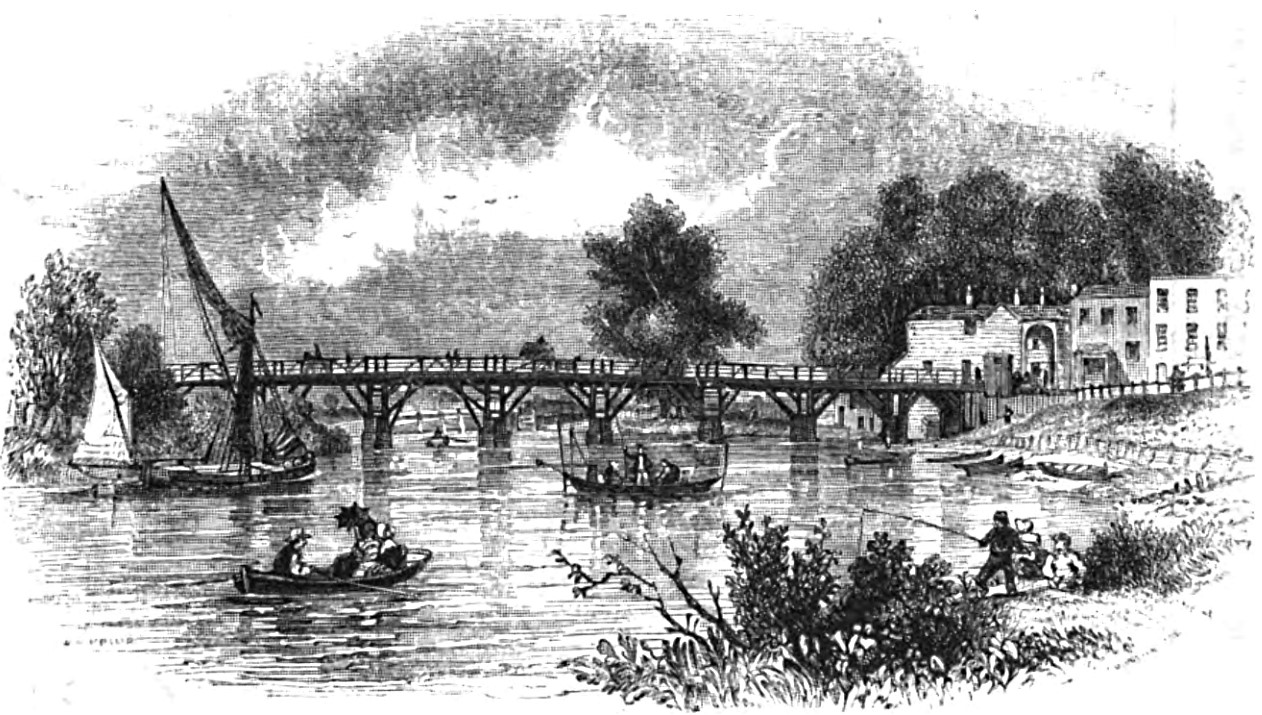 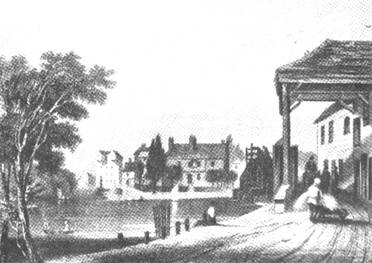 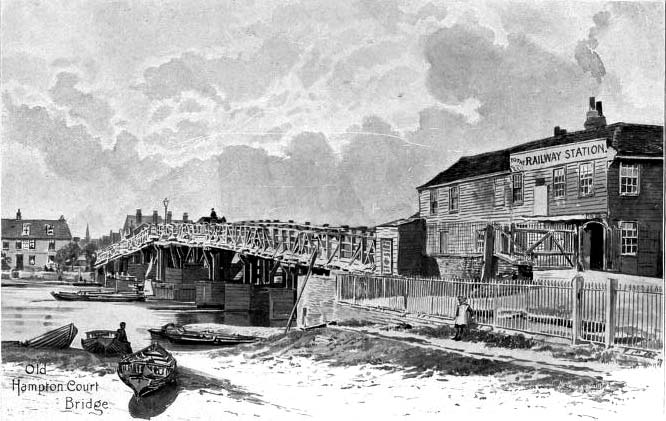 1864:  The old bridge was described as “crazy,hog-backed, inconvenient and obstructive of the navigation”.
But this sounds more like the first bridge(1753-1788) than the second?
The third Hampton Bridge (1866-1933), a wrought iron girder bridge, was started, designed by E.T. Murray. 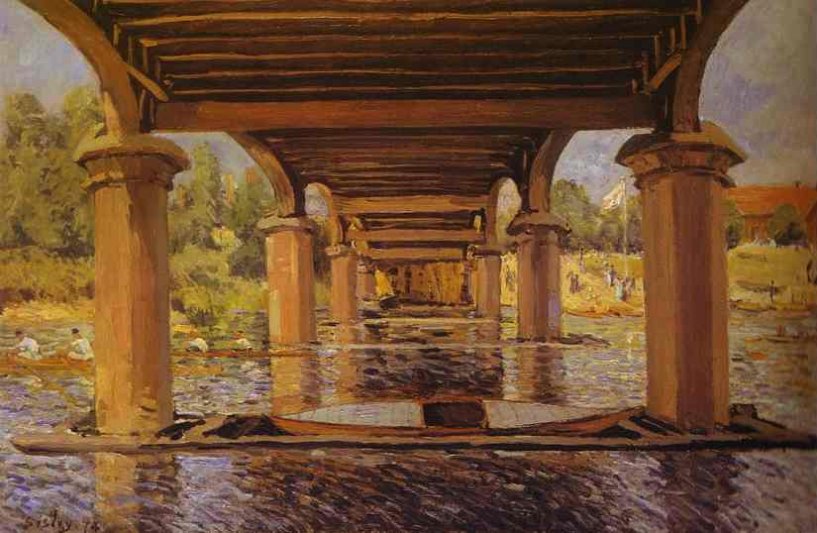 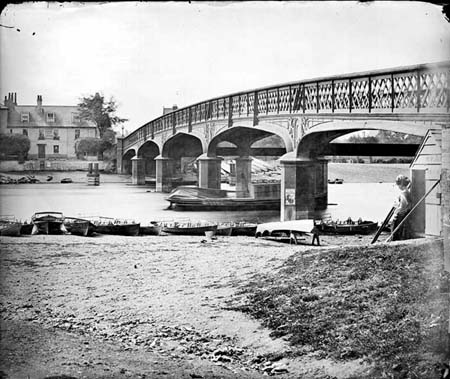 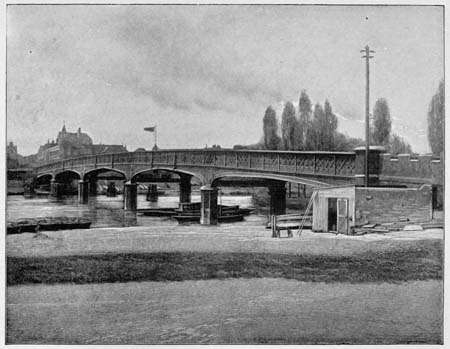 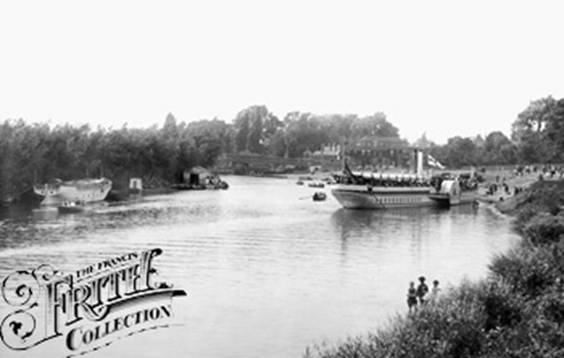 1901:  The Thames illustrated : a picturesque journeying from Richmond to Oxford, John Leyland -

We shall pause in our journeying at the bridge at Hampton Court, by the hospitable "Mitre".
The bridge [that would be the third bridge 1866-1933], a structure that disfigures the stream, is the successor of others more picturesque, and of one more curious.
Truly a famous resort is this for fishermen and boating parties, for those who love to ply the line and pull the oar, to lie in the summer sunshine where the green bank casts its shadow, who delight to journey by coach or cycle along the road ... [ he goes on! ...]
...
Strolling down from Hampton Court to our boat which lies by the bridge, we leave behind us a whole world of famous memories and a crowd of delightful places; but it is to meet new interests and other beauties, to enter again upon the living enjoyments of the river, marked by the laughter of boating parties, the long, strong, pulling of practised oarsmen, and the placid pleasures of anglers in their punts ... 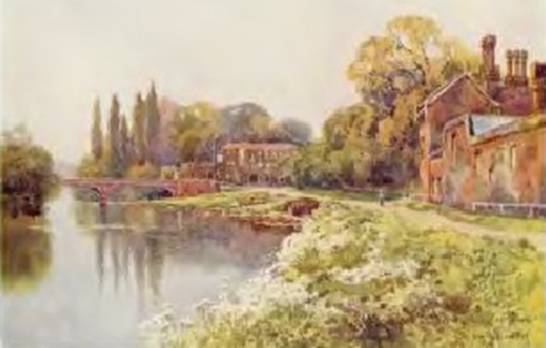 1933:  The fourth and current bridge was built to designs by Sir Edwin Lutyens 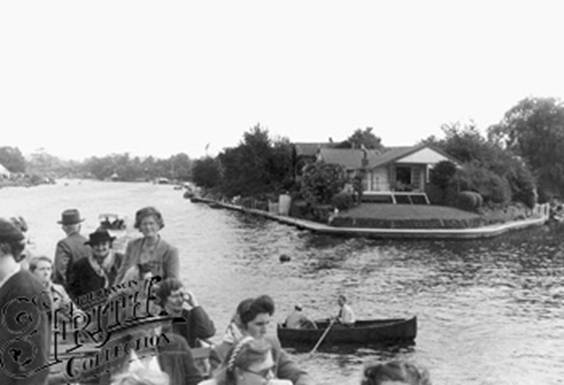 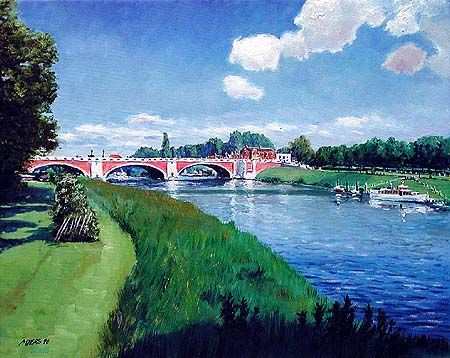 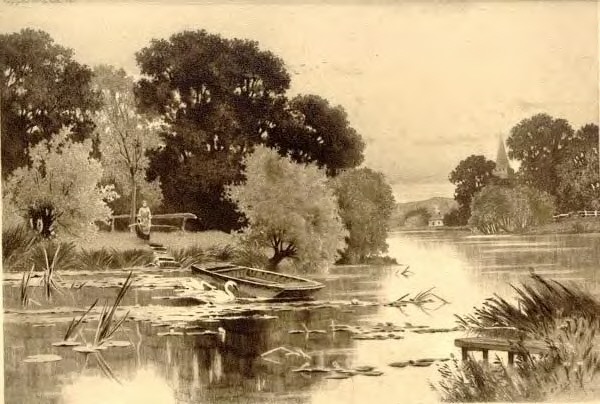