Kew — "the situation of which near the water-side might induce one to seek for its etymology from the word key or quay" — has been variously written at various times "Kayhough, Kayhoo, Keyhowe, Keye, Kayo, and Kewe." Lysons, half a century back, describes its greenhouse as famous, being 140 feet in length; and Darwin, about the same period, pictured its garden as "a crowning glory" -

So sits enthroned, in vegetable pride,
Imperial Kew, by Thames's glittering side.

The historian and the poet, could they rise from their graves, would see with wonder and delight the greenhouse and the garden of to-day, filled with the floral beauties of a hundred lands, — miles of walks among flowers under glass.
Inasmuch as there is an admirable and cheap guide-book for the use of visitors, compiled by the accomplished Curator, Sir William Hooker, we are relieved from the necessity of details descriptive of these beautiful gardens and conservatories: it will suffice to say that, although still the property of the Crown, and in charge of the Board of Works, the public are freely admitted every day, under a few needful restrictions; that the privilege is enjoyed by very large numbers daily; and that the result fully bears out the belief, that where advantages are given to "the people", they are neither lost nor abused by carelessness or cupidity. Cases of impropriety are rare, while it is certain that health, instruction, and gratification, have been largely derived from the means thus generously placed at the disposal of all. 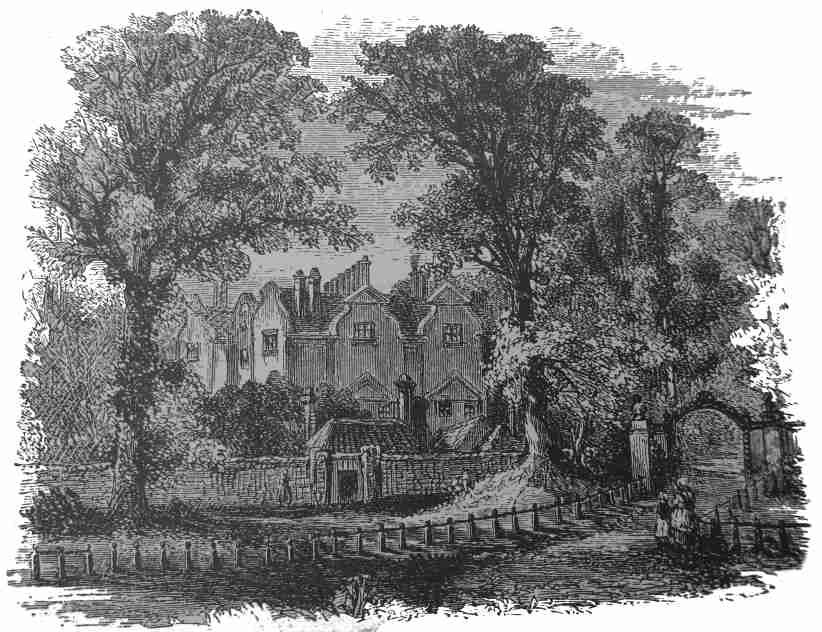 Although we do not delay the voyager by describing the gardens, we ask him to visit the ancient and venerable Palace, famous during
"Good King George's reign,"
and interesting now, although it is lonely and without inhabitant — standing as a striking and somewhat gloomy monument to record the libarality of the sovereign and his successors, who gave the adjacent grounds to the people. It was once the property of Sir Hugh Portman, "the rich gentleman who was knighted by Queen Elizabeth [I.] at Kew", and was built during the reign of James I., although it retains very little of the style of architecture of that period, being of red brick, but exceedingly plain and without ornament. In 1781 it was purchased by George III.; his queen, Charlotte, died there, and during many years it was the favourite suburban residence of the royal family.
Under the superintendence of her Majesty, the grounds were
"ornamented with various picturesque objects and temples, designed by Sir William Chambers, among which is one called the Pagoda, in imitation of a Chinese building, 49 feet in diameter at the base, and 103 feet in height."
No doubt this was a marvel at the time of its erection; it is still a conspicuous object from all adjacent parts, and the temples are attractions judiciously distributed.
It is more than delightful to escape in summer from the turmoil of the hot, dusty, London world, to the peculiar serenity and surpassing beauty of Kew; the gardens are so full of interest, so varied, so suggestive, and so instructive, that a much larger space than we can devote to the subject would fail to convey an idea of the treasures they contain; we are willing, therefore, to let fancy go back to the time of Queen Charlotte, whose love of nature laid the foundation of that which now yields — sometimes to many thousands in a day — so much of health, pleasure, and information. The square red "palace" — which her Majesty loved sufficiently well to select as a residence, above all others, after the death of her beloved husband- — seems lonely and silent in the midst of that fragrant paradise, where trees are bursting into bloom, and birds are pouring forth the rejoicings that specially belong to the "sweet month of May"; but there is no difficulty in peopling it with "the great" of the past, and seeing, by the light of history, the beautiful and brilliant family that once held court

Beside the Thames at Kew.

In those days the "gardens" were, like the palace, the exclusive property of the Crown: but when the latter ceased to be a "royal residence", our good and ever-considerate Queen, desiring to enlarge the circle commenced by Queen Charlotte, devoted the whole of the estate to the fruits of botanical research; and it was finally determined that the public should be admitted daily. Thus the "gardens at Kew" may be ranked amongst the great teachers, as well as the healthful luxuries, of the people.
It is delightful to see how truly this privilege is enjoyed by the various classes who visit Kew: the humble but well-dressed artizan and his family are generally "taken " with the beauty of the grounds and the marvels of the "House of Palms"; brilliant ladies, whose dresses rival the flowers in variety of tone and colour, linger in the "houses", or enjoy the charming promenades under shadows of lofty trees; the botanical student pores over the "specimens", both in the beds and in the houses- — too often, while alive to what is rare or curious, forgetting the beauty of the "wonderful works of the Creator". Long after the mere pleasure-seeker has returned to London by the rail or the river, you may observe two classes of persons lingering in Kew Gardens — the mere botanical student, and the artist, sketching for popular botanical publications, that add so much to the interest and the information of our drawing-rooms. Foreigners are especially delighted with Kew Gardens; the vegetation, the absolute green — so vigorous and fresh with us, is never so bright on the Continent as it in England; and however rare and wonderful the collections are in foreign lands, there is usually a slovenliness in their display which no English gardener could endure: our lawns excite the especial admiration of strangers, who are lavish of praise of our "good order" and "arrangement". To thoroughly appreciate "Kew Gardens" they should be repeatedly visited; the changing seasons vary the character of their loveliness: there is always something fresh to admire, something new to learn; and though the "new museum" is so totally devoid of architectural excellence as to be a blot where it might have been a beauty, yet its contents are of the greatest value and interest, and such as lead from the threshold of science by paths which the research and learning of great botanists render comparatively smooth and easy.

"Kew Green" is one of the most "quaint" and peculiar "bits" of scenery within ten miles of the metropolis. The church may be taken as the principal feature,— a clean, bright, stately English church, neither new nor old. This "green" is irregularly "flanked" by houses of all heights and qualities; some trellised, some bare and stately, others hid away in the bright foliage which climbs their walls; some standing boldly forward, others receding modestly behind trees.
The church stands on the west side of the green. Its graveyard contains the graves of several remarkable men, among whom may be named Gainsborough and Zoffany. Gainsborough was never a resident here: he resided for many years at Schomburg House, Pall Mall; it was at his own request that he was buried at Kew, beside the grave of his old friend, Kirby, author of a once celebrated work on Perspective; but Zoffany lived in the little hamlet called Strand-on-the-Green, which adjoins the [Kew] bridge on the Middlesex side of the river. 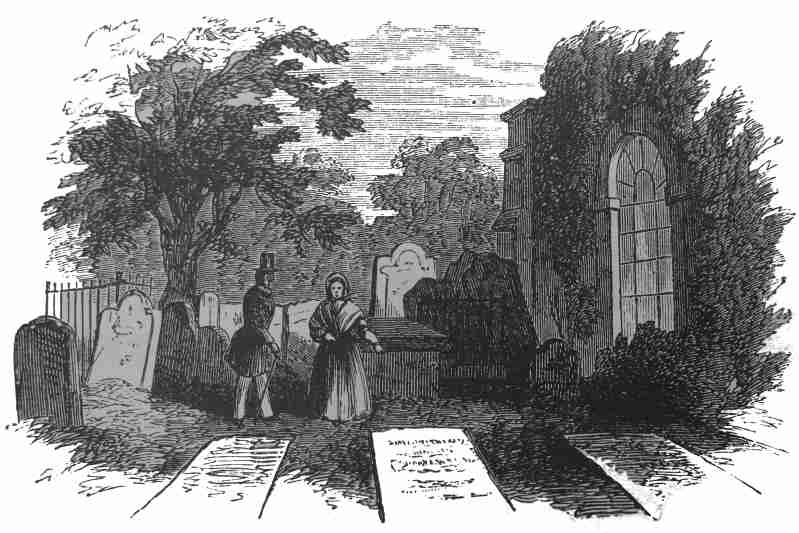 Gainsborough's tombstone is the central slab in the foreground of our engraving. He had desired that his name only should be cut upon the stone; it is, therefore, simply inscribed,
"Thomas Gainsborough, Esq, died August 2nd, 1788, aged 61 years."
A similarly brief inscription records the death of his wife ten years afterwards. There is enough of the "country churchyard" yet remaining at Kew to make it a fitting resting-place for such a painter: one who has left us some of our most charming pictures of natural scenery. It is no unpleasant spot, for trees shadow it, and a free air is around. It is a more agreeable pilgrimage to the grave of Gainsborough than to the place of greater honour — the crypt of St. Paul's — where so many of his brethren lie. In a few years, however, Kew may be part of London; for buildings are rising rapidly between the sequestered village and the outskirts of the metropolis.