1847: The Windsor, Staines and South-Western Railway was given permission to build a 7.25 mile line from Barnes to Feltham.
1848: Designed by Joseph Locke and Thomas Brassey, this cast-iron railway bridge was built in 1848 to carry a loop line to by-pass Richmond
There was no boat race in 1847 and 1848 - and this might have been due to the problems of running a race through the construction site.
1849: Bridge opened, this loop line was to prove a useful by-pass for passenger and freight traffic, avoiding the busy route through Richmond.

1849: The newly built Barnes Railway Bridge. Notice that the characteristic bow-string girders are not part of the original bridge -

1859: In the boat race the Cambridge boat sank at Barnes

The bow-oar had been frequently covered with water, and opposite the White Hart at Barnes three waves washed completely over the boat: at the first warning the gallant crew, knowing what was coming, took their feet out of the stretcher straps and prepared for swimming, all except Mr. Smith, who had not learnt the art. At the fourth wave the boat sank completely under them, and it was almost a miracle they were not drowned, for the umpire's boat, the Lady of the Lake, was close on their stern at the time; but the captain, in a very clever manner, immediately stopped his vessel, and life buoys and ropes were immediately thrown out. Mr. Darroch [No. 4] swam on shore, and all the others were fortunately picked up by various boats.

That portion of Barnes which is called the Terrace immediately succeeds Mortlake; it is a pretty and pleasant row of houses, chiefly let as lodgings, the place being much in favour during the summer months.
The village lies further back from the river — a straggling village, with a cluster of houses surrounding a pond. Some parts of the church are said to be as old as the time of Richard I. ... 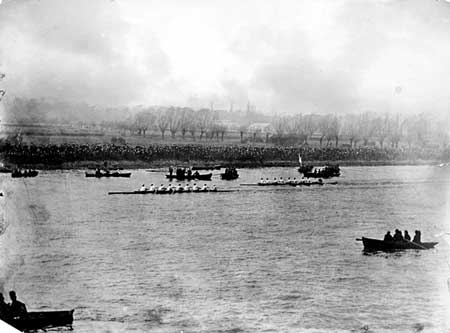 "To the River Between Barnes and Kew Bridges", Cyril F Austin in C B Fry's Magazine, 1905

A MIDSUMMER IDYLL
Panting, I listen to the cox, hysteric,
With abuse of me, poor wretch!
Toiling the daily hour on thy Homeric ...
... STRETCH

As on we speed past prospects only seeking
Some enthusiastic etcher,
My once artistic soul bemoans my creaking ...
... STRETCHER

Our thanks to thee! Despite the heat that stews, thou
From the musty office fetchest
Our enervated bodies, and our thews thou ...
... STRETCHEST 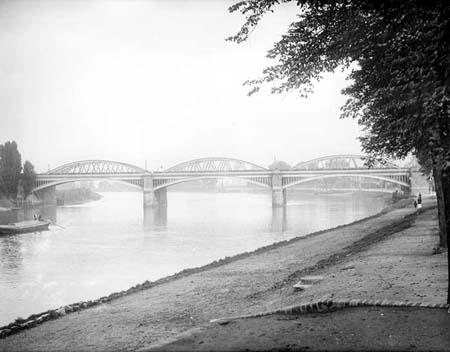 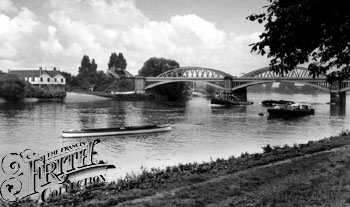 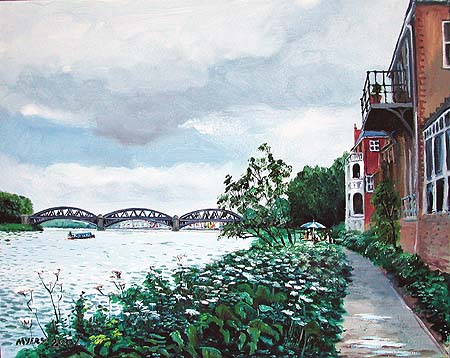 The original Thornycroft Works were on the Right bank, half way between Barnes Railway Bridge and Chiswick Bridge.
1873: Advertisement - 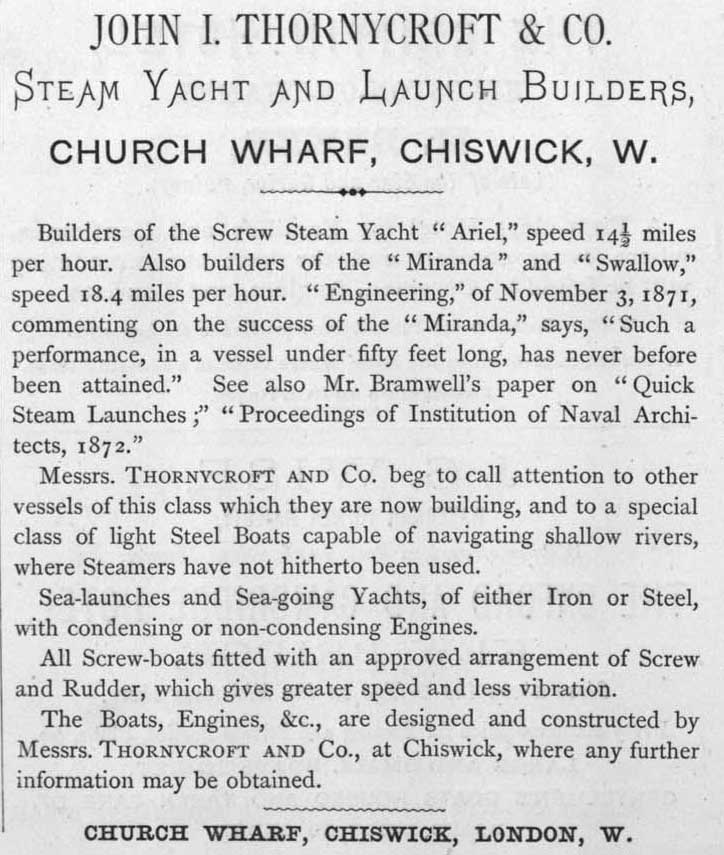 1904: Thornycroft works moved to Southampton because of the difficulties of getting their larger boats down river.

Right Bank above Barnes Railway Bridge and below Chiswick Bridge.
Japanese Knotweed is a pain all along the Right bank. It grows in tall stands like bamboo and spreads vegatively (not by seed). Any small piece of the plant will start growing. So mowing / cutting it simply spreads it around. On a still day in early summer it can be heard growing (little clicks). It takes intensive work to suppress it - and even then will almost certainly return.