1746: View from Richmond House - Canaletto.
(looking downsteam from the right bank almost opposite the London Eye over the site of the future bridges)


View from Richmond House (almost opposite the London Eye) Canaletto 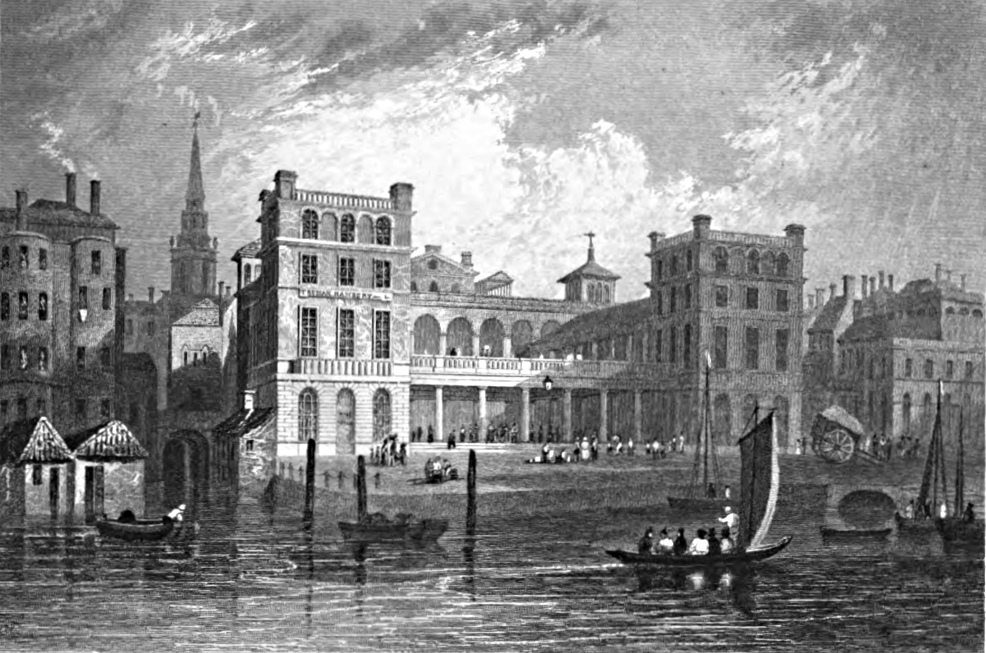 The bridge and footbridge takes its name from Hungerford Market which was situated on the site of Charing Cross Station.
The first bridge here was a pedestrian toll suspension bridge by Brunel

One of Brunel's design drawings for Hungerford Suspension Bridge - 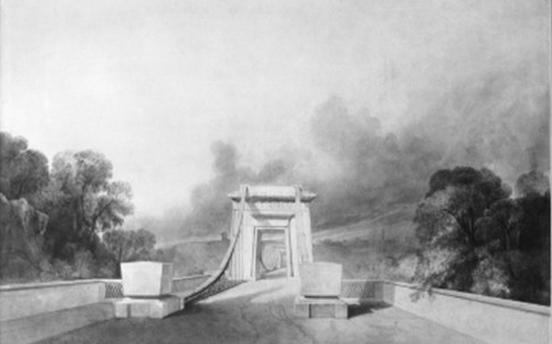 1845: The Half built Hungerford Suspension Bridge in the "Grand Panorama of London" - 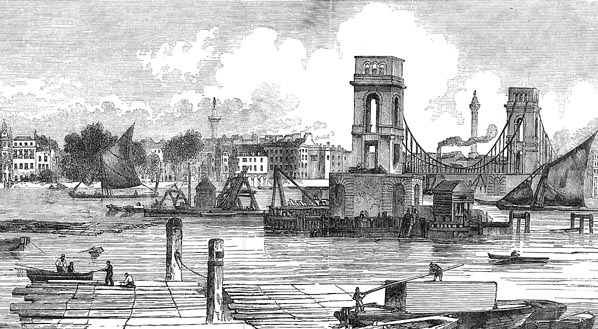 Half built Hungerford Suspension Bridge in the "Grand Panorama of London", 1845 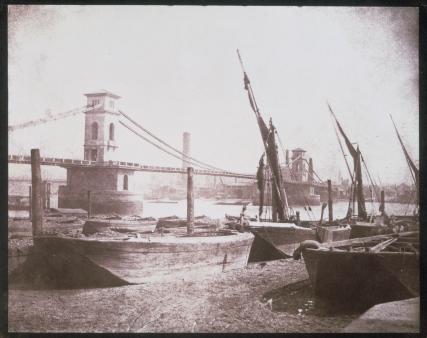 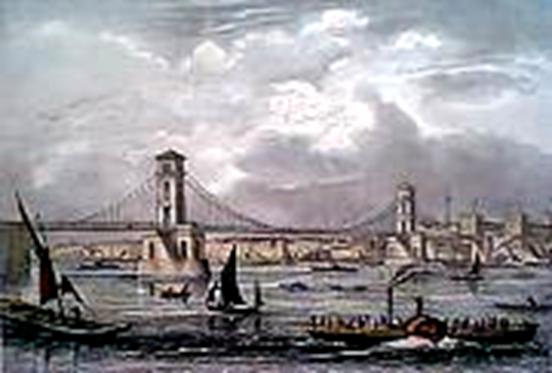 HUNGERFORD SUSPENSION BRIDGE, called also Charing-Cross Bridge, crosses the Thames from Hungerford Market to Belvedere Road, Lambeth, is 1352 feet long, and is for foot-passengers only.
It was constructed under the direction of Mr. I. K. Brunel, and opened April 18th, 1845.
It consists of three openings; the span of the centre is 676 feet 6 inches, and that of each of the side openings 333 feet. The height of the roadway from high-water mark is 22 feet 6 inches; at the piers, 28 feet; and in the centre, 32 feet. The clear width of the roadway is 14 feet. The piers are built on the natural bed of the river without piles.
The roadway is carried by four chains, in two lines, with single suspension-rods on each side, 12 feet apart. The chains pass over rollers in the upper part of the towers, so as to equalise the strain, and are secured in tunnels at the abutments to two iron girders, 44 feet long and 5 feet deep, solidly embedded in a mass of brickwork in cement, further strengthened and backed up with concrete.
The span of the central opening is greater than that of any suspension-bridge in Britain. It is only second to the suspension-bridge at Fribourg, in Switzerland, the span of which, from pier to pier, is nearly 900 foot.
The first stone was laid in 1841; and the total cost, including the purchase of property, parliamentary, law, and other expenses, was £110,000 In 1845, the bridge was sold to the original proprietors for the sum of £226,000, but only the first instalment was paid, and the purchase was thus void. The toll charged is a halfpenny each person each way.

[Hungerford Bridge], renamed Charing Cross bridge in 1848, was a pedestrian suspension bridge which attracted considerable traffic, particularly after the opening of Waterloo station, so that its toll revenue for the years 1845, 1850, 1851 and 1853 averaged £25,000 annually . Initially at least it also derived revenue from river steamers using its piers, so as its cost was £80,000 and £125,000 was realised by sale to the South Eastern Railway in 1864, it was a good investment. The railway company replaced it with a railway bridge but maintained footpaths and continued to collect tolls until 1878 when the Metropolitan Board of Works paid £98,540.

1856: The removal of the old London bridge changed the tidal currents around Hungerford Bridge. A survey showed that the increased currents had scoured away a considerable amount of sediment -

1864: The bridge was bought by the South Eastern Railway and demolished and Charing Cross Railway Bridge replaced Brunel's suspension footbridge, the chains of which were removed for use in Clifton Suspension Bridge.
1,200 feet long. Nine wrought-iron girders are supported on cast-iron cylinders and on the two arched brick river-piers preserved from Brunel's suspension bridge. Engineer: John Hawkshaw. Contractor: South Eastern Railway

1871?  Charing Cross Railway Bridge, Camille Pissarro.  The date is a deduction from the fact that this is the only year that I can find he visited London - 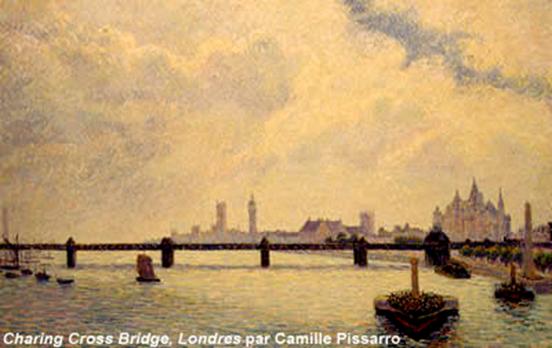 To go with Pisarro's painting there is this poem by Emile Verhaeren:

I have tried to translate it poetically - but its not easy!
 If you want a laugh try Google's translation

And what, my soul, of this cast iron and bronze London?
Where the iron plates ring in the workshops?
And they set sail without Our Lady's star to guide
Taking their chances on their destination.

In stations of soot and smoke where the gaslights weep
Their sad silver, so far away from the lighted streets
The baleful beasts' bellows mark time
Their doleful sounds like the Westminster chimes.

And these unending quays lined with dim lanterns
Appearing as torches carried down to the depths.
And these drowned sailors, fathoms under the mud,
Flower where the flame gleams.

And these steps like these gestures of drunken women,
And these tipsy letters of gold up to the rooftops,
And, all of a sudden, death among these crowds;
O my dark soul, this black London drags you down!

1886: The bridge was widened to increase the number of railway tracks from four to eight. 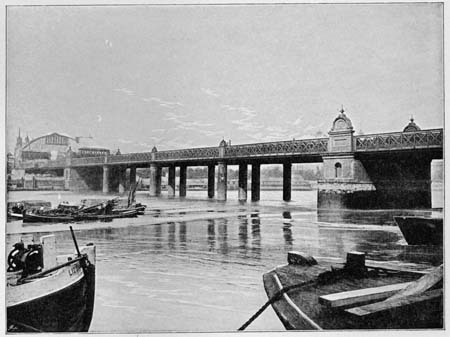 The above photograph shows the station as it was before the collapse of the arched roof in 1905, the details of which are here: www.railwaysarchive.co.uk/eventsummary.php?eventID=6614 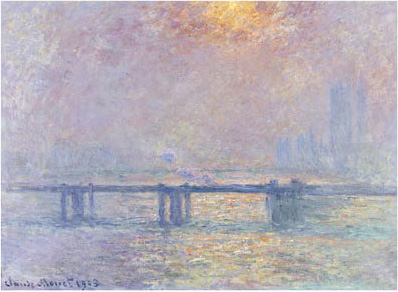 Claude Monet painted Charing Cross Bridge, London in 1901, during the last of three consecutive winter trips to the English capital. The artist stayed on the sixth floor of the Savoy Hotel; looking to his right he could see the railway bridge running from Charing Cross Station and beyond it the neo-Gothic towers of the Palace of Westminster.
The canvas reveals Monet's fascination with the golden light of early morning, filtered through London's characteristic fog, which is dispersed and transformed into veils of lavender-pink, lemon yellow, and powder blue. The overall mood is expansive, encompassing the past, as seen in the city's historic architecture, as well as the present, represented by a speeding train. 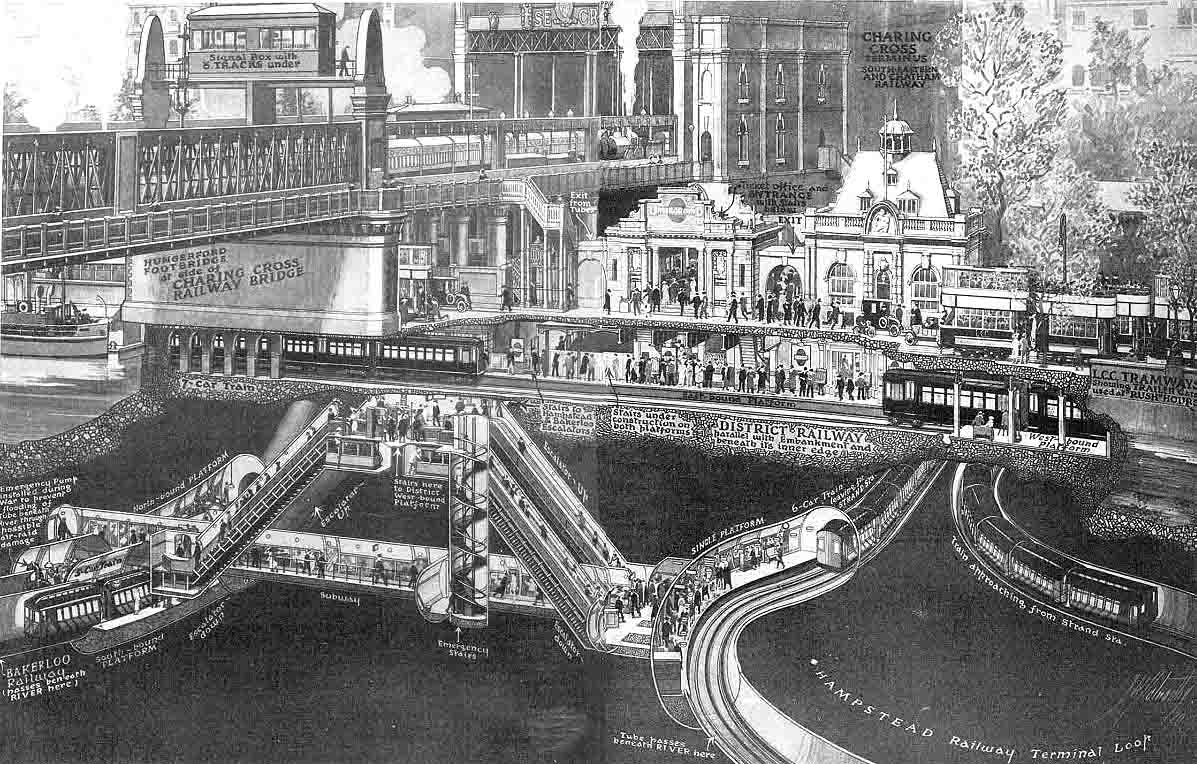 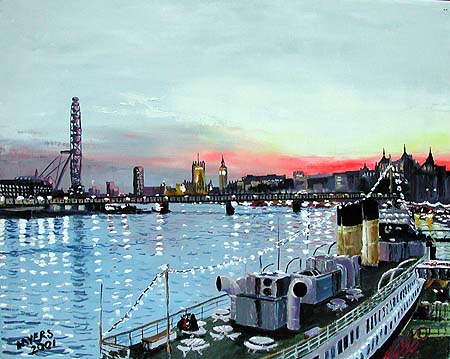 2000: A £50m Hungerford Bridge Millennium Project was started to provide additional pedestrian access.  Two multispan footbridges have been constructed, each 320m long and 4.7m wide giving passage from the South Bank to the Surrey Pier (Brunels original now restored).  The scheme which consists of two new suspension footbridges supported by white-painted steel rods which fan out from slanting steel pylons. A daring structure that echoes Brunel's original suspension bridge on the site.
The new bridges provide a spectacular view of Londons riverside especially at night.  The lighting concept aimed to achieve two main goals - to provide safe passage across the Thames after dark whilst maintaining views and to provide an appropriate expression to the structure creating a new landmark after dark.
Architect: Lifschutz Davidson. Engineer: WSP Group. Contractor: Costain/Norwest Holst - 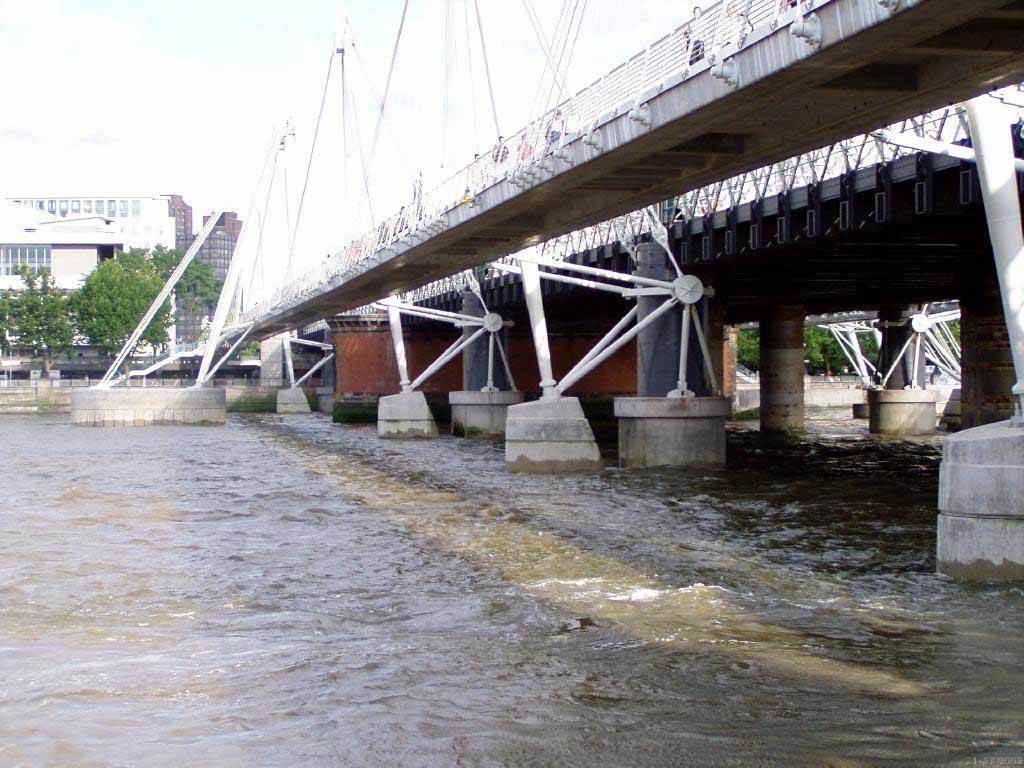 Left bank (East) Just below Westminster Bridge
Previously home of the Greater London County Council (GLC). Part of the family silver - but heartlessly and vindictively sold off ...
[ I could say very very much more ... Aargh!!! ]