Prior to the embankment this is what the area looked like: 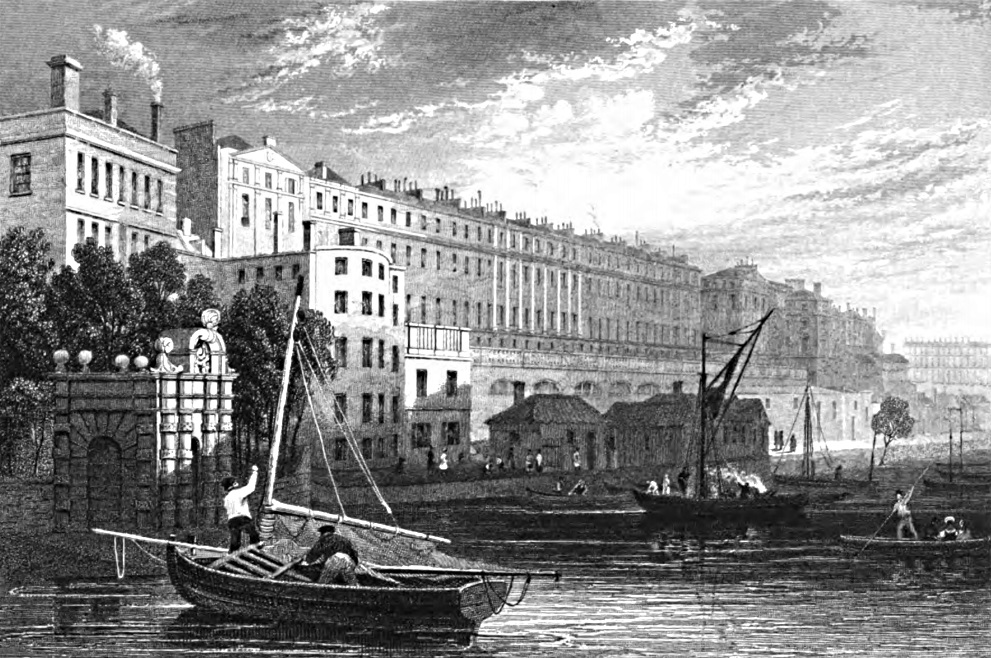 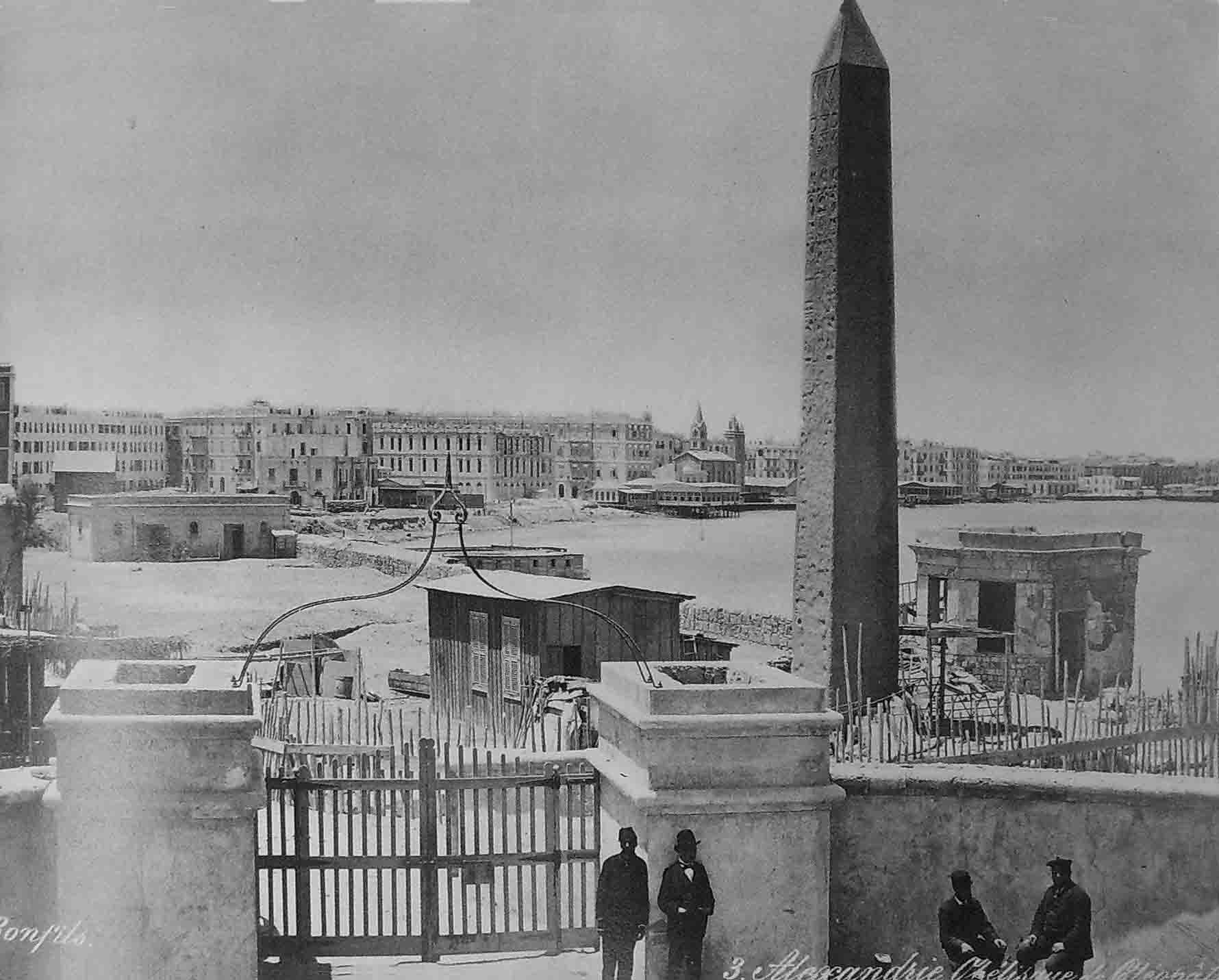 This obelisk, the twin of the London Cleopatra's Needle, standing on the beach at Alexandra

1819: One obelisk was presented to Britain by Mehemet Ali.
1877: A floating wooden case was made for it, but it was damaged by a rock as it rolled into the sea - 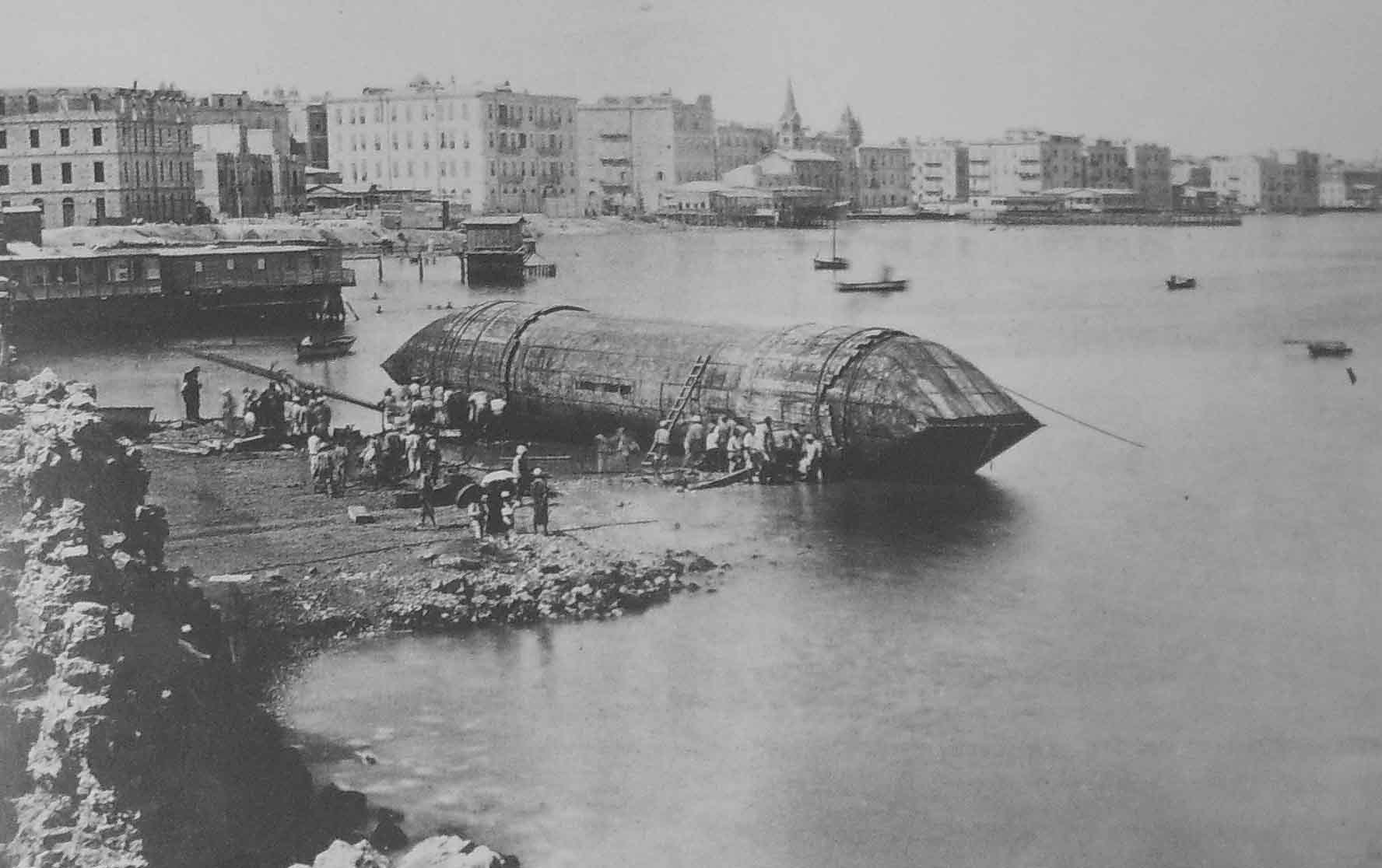 Cleopatra's Needle in her wooden case at Alexandra

The wooden case was then converted into a "ship" which was towed by a tug.

Cleopatra's Needle being towed by a tug.

it was towed across the Mediterranean, past Gibraltar - but was abandoned in a storm in the Bay of Biscay with the loss of six lives. 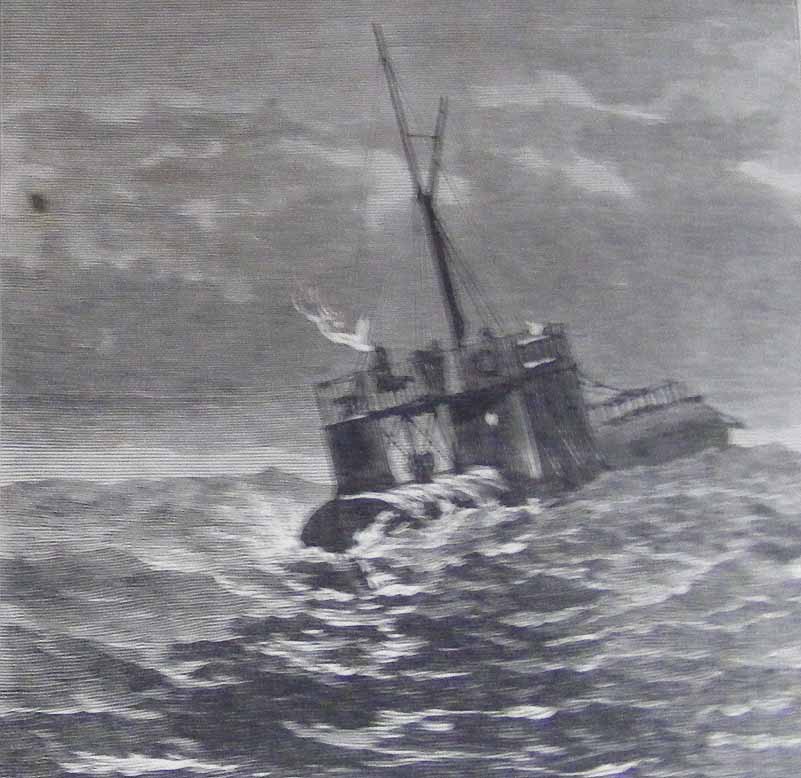 Fortunately it was rescued by a steamer and eventually brought up the Thames. 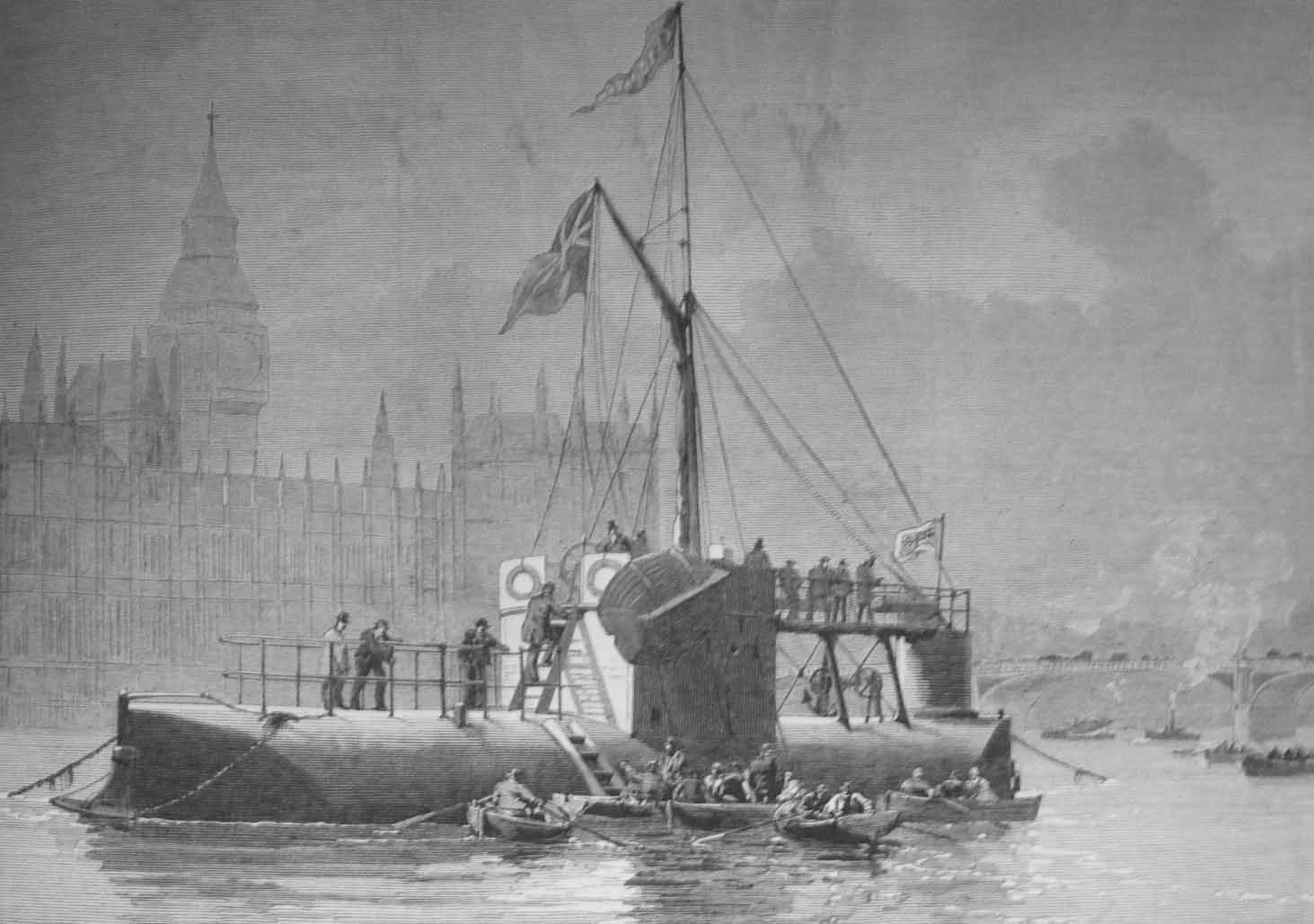 The lifting of it into position was quite an exercise. Here is how they did it:
First it was raised horizontally (all 193 tons of it) - 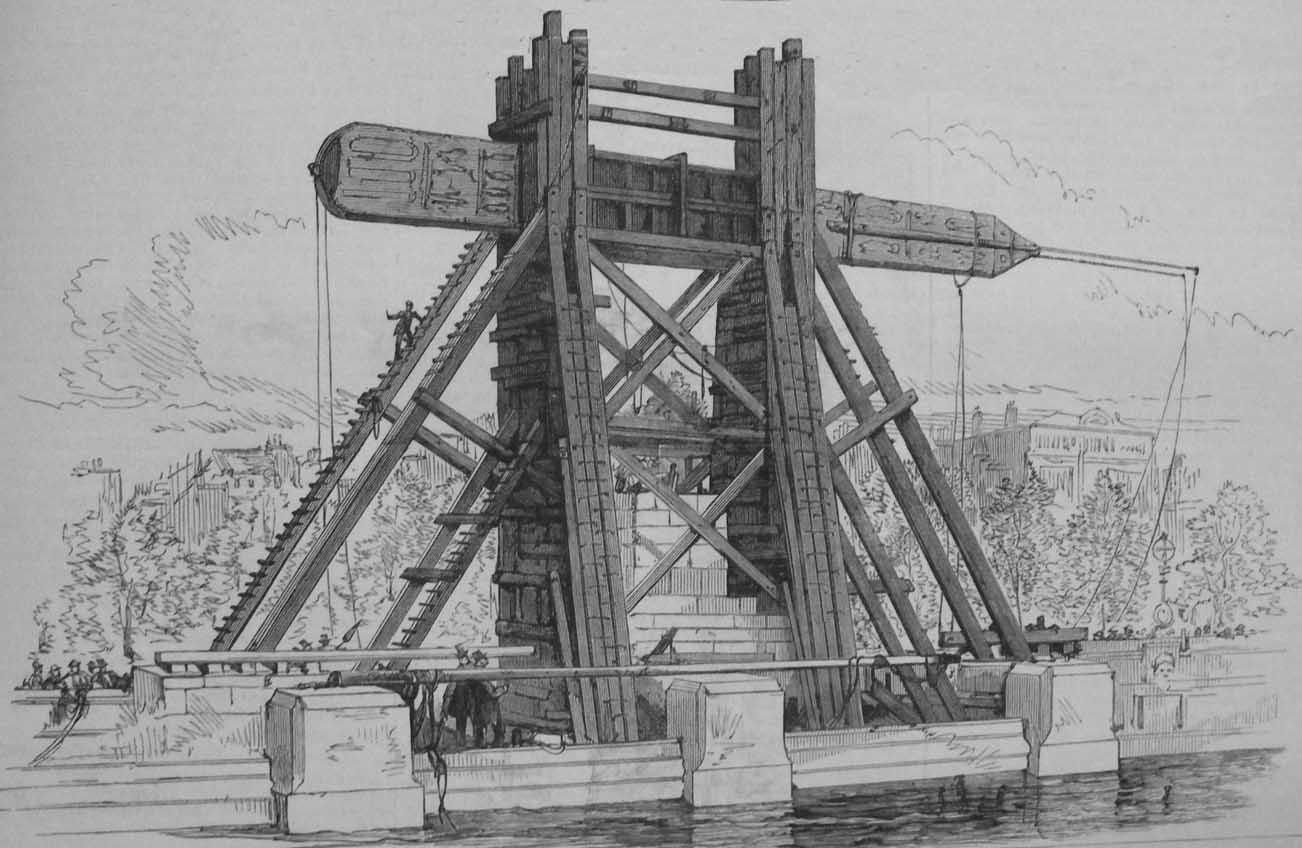 And then pivoted into the vertical - 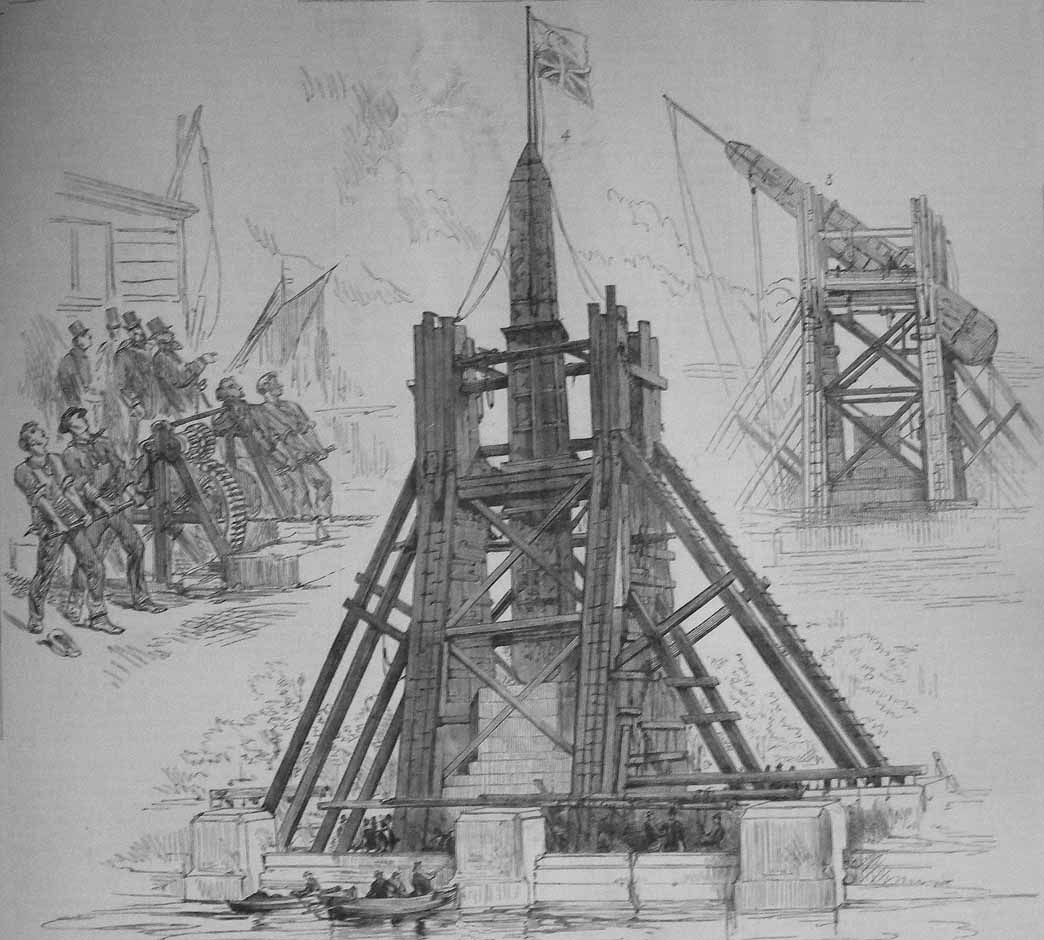 The Illustrated London News [from which the above prints were taken] -

CLEOPATRA'S NEEDLE
The Egyptian obelisk from Alexandria, which was lately to be seen hoisted aloft in the horizontal position at the river-stairs of the Victoria Thames Embankment opposite Adelphi Terrace, was on Thursday week placed in its due perpendicular attitude, directly over the pedestal, which will now be completed by adding the upper course of masonry.
The mechanical arrangements for swinging this huge monolith, which measures 68ft 3in in length, 5ft 10in by 4ft 10in in breadth at one end and 7ft 10in by 7ft 8in at the other, weighing 193 tons [have been described in our journal]. It had been fitted with an iron jacket round the middle, and with a wrought-iron girder by way of a stirrup, to support the lower end of the stone, when it was gradually let down, and so to prevent its slipping out of the iron jacket by which its centre was held suspended.
The obelisk had been lifted to the height of 50ft above the pedestal, through the elevation by hydraulic jacks, of a pair of iron girders working upwards in grooves left in the main angles of the scaffolding. Upon these girders rested a pair of peculiarly formed trunnions projecting from the iron jacket, and supported the obelisk in a horizontal position during the time it was being raised.
The monolith having attained the necessary altitude, it was only necessary to swing it on the trunnions, or, in other words, to let down the butt or thick end, so as to get the stone into a vertical position, but still held up, with its bottom a few inches above the top of the pedestal. The total weight, including the iron girders was 216 tons. The operation of "swinging" was completed in about three quarters of an hour, and by lowering the girders the obelisk was allowed to descend to the pedestal and the "Union Jack" and Turkish ensign were run up in token of the success of the work.
The obelisk was still kept a little held up, in order that its exact perpendicularity to the surface of the pedestal might be tested with mathematical precision. It had a partial support from the wooden packing laid underneath. On Friday morning this was removed, the weight having been first eased by the action of hydraulic jacks. The obelisk was then let down the remaining four inches, till it finally rested on its pedestal. The iron jacket and strap will now be stripped off and the scaffolding removed. The operation of Thursday week took place between three and four o'clock in the afternoon.
For the accommodation of those who have taken a special interest in the progress of the work, Professor Erasmus Wilson and Mr John Dixon had chartered a steamer, which was moored abreast of the works. Sir J W Bazalgette, C.B., chief engineer to the Metropolitan Board of Works, and several gentlemen of the engineering profession were present; also Major-General Sir James Alexander, C.B., Admiral S E Omanney, C.B., Sir Charles Read, Professor Owen, Alderman Sir C Whetham, Sir G Elliott, M.P., and Mr Grantham, M.P.
It is stated that Mr John Dixon C.E., has expended £5,000 over and above the £10,000 liberally bestowed by Mr Erasmus Wilson, for the cost of bringing Cleopatra's Needle from Egypt, with its detention by the accident in the Bay of Biscay, and finally erecting the obelisk in London.
The Hon. C Vivian, Consul-General in Egypt, was present on the Friday. Telegrams were received by Mr Dixon from her Majesty the Queen at Balmoral, and from the Khedive of Egypt, to congratulate him and Mr Erasmus Wilson upon the completion of their undertaking.

1881: The remaining obelisk was given to America and erected in Central Park, New York

Cleopatra's Needle stands on the Victoria Embankment ... This famous monolith of red granite, from Alexandria, originally stood at Heliopolis, and was presented to this country by Mehemet Ali in 1819.
No ministry was bold enough to face the difficulty and expense of transporting it across the Bay of Biscay, and for many years it lay half-buried by sand at Alexandria, at the foot of its still erect sister, which, according to some people, is the real original Cleopatra's Needle. In the Alexandrian sand the English obelisk would probably have remained until the end of time (unless, indeed, the British tourist had carried it away piecemeal in the form of relics) but for the public spirit of the late Sir (then Mr) Erasmus Wilson and Mr John Dixon, the well-known civil engineer. Mr Wilson put down £10,000 for the expenses of transport, and Mr Dixon undertook to deliver the monument in the Thames for that sum on the principle of "no cure, no pay" - no obelisk, no £10,000.
A cylinder boat was designed, in which the needle was encased, and justified Mr Dixon's expectations by making good weather of it until it became unmanageable and untenantable in a heavy gale in the Bay of Biscay. Abandoned by the steamer which had it in tow, after the sacrifice of six lives in a last gallant attempt to save the Cleopatra, few people doubted that the needle would find its last resting-place at the bottom of the sea. Fortunately a passing steamer succeeded in securing it, and towed it into Ferrol, whence it was safely transferred to its present site.
Much ingenuity was shown in the machinery designed for its erection, the difficulties of which will readily be understood when it is stated that the obelisk is over 68 feet in height, and weighs 180 tons.