The Millenium Footbridge was not the first bridge proposed for this site - see below
2000:  325 metres long, 4 metres wide. The flat steel suspension bridge carries pedestrians over the river between Tate Modern and St Paul's Cathedral. Also known as the "Wobbly Bridge" because of the swaying that occurred at its official opening in 2000. The bridge developed a marked instability when too many people used it. The bridge was closed while the problem was solved using a system of dampers.
Architect: Foster and Partners. Engineer: Ove Arup & Partners. Contractors: Monberg & Thorsen/Sir Robert McAlpine

See Walking on a moving surface: energy-optimal walking motions on a shaky bridge
Walking over a bridge may never be the same again!

The Millenium Bridge under construction - 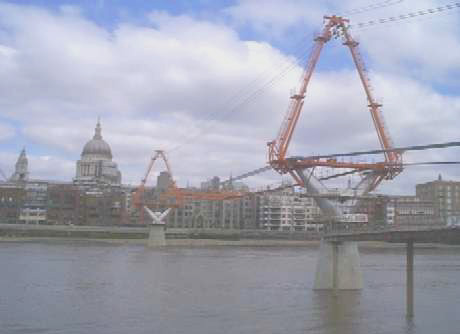 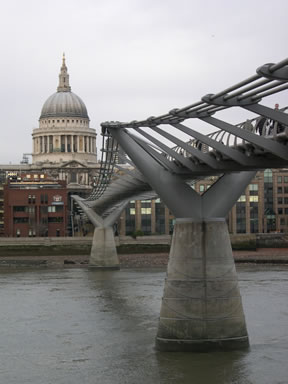 1650?: A view of old St Paul's Cathedral from the River by Wencelaus Hollar. 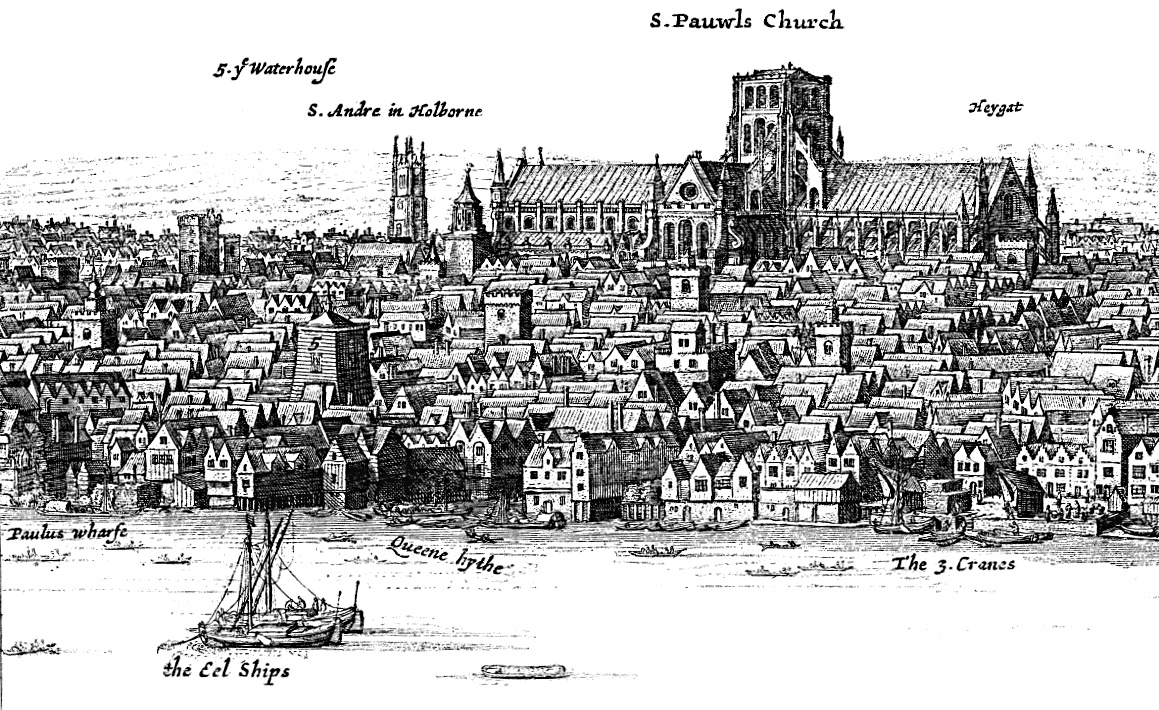 1747: Canaletto painted St Paul's Cathedral from the river. The Millenium Bridge site would have been central, and on the far right is the old [1819-1920] Southwark Bridge - 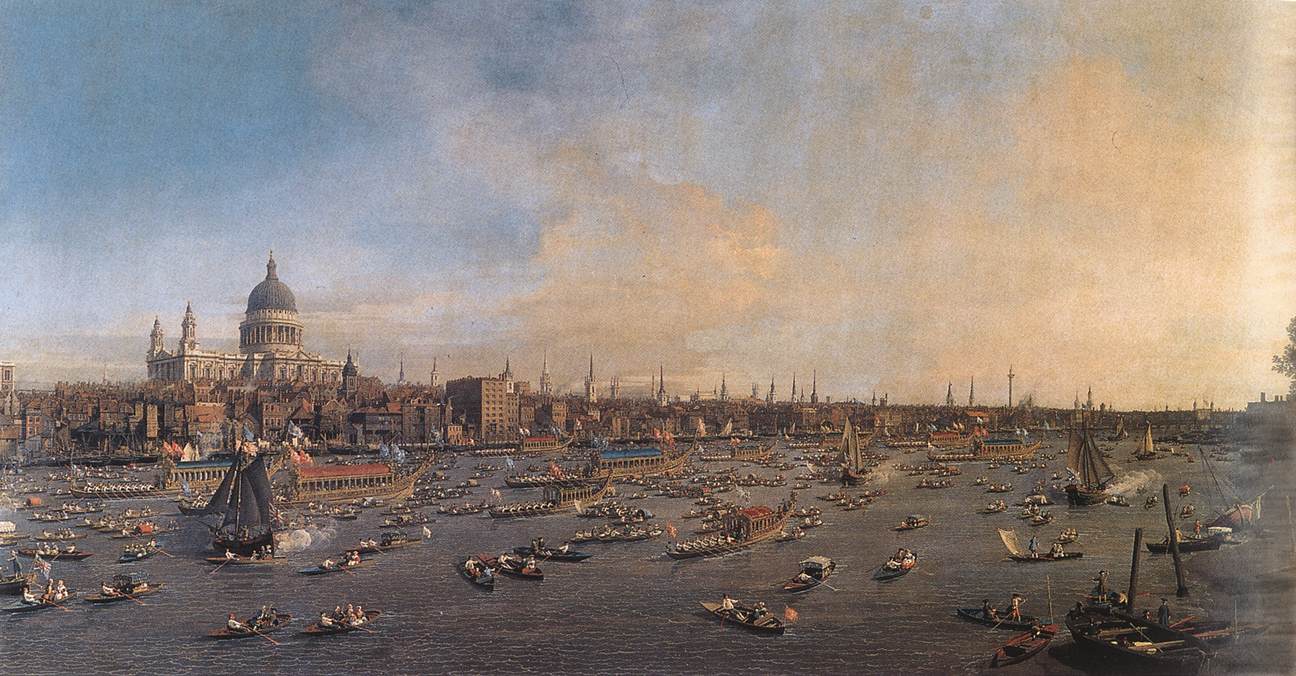 The Thames and the City, Canaletto, 1847 in the National Gallery, Prague.

Which is very lovely and "old masterly", only that picture desperately needs cleaning, because there is another version - and here is the detail from that! 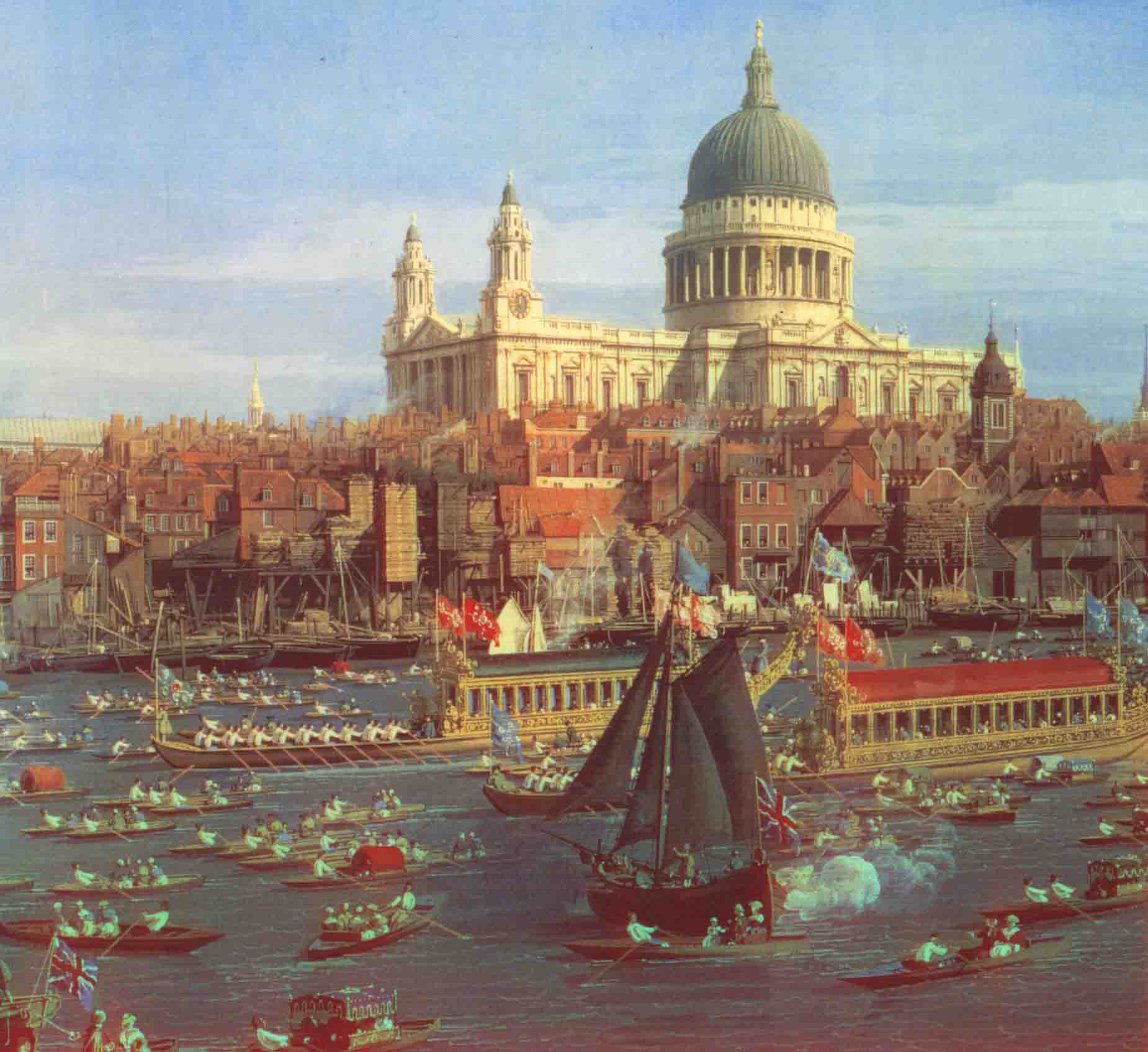 The Thames and the City, Canaletto, 1847

NEW BRIDGE OVER THE THAMES.
It has been proposed in the Common Council of London to erect a new bridge, to be called St. Paul's Bridge, to be approached from St. Paul's cathedral.
If London had for its population, as much bridge accommodation as Paris, there should be 132 bridges instead of 7. According to distance there should be 42.
It is intended by the new bridge to relieve the traffic of the streets in the city, the loss by the frequent stoppages in which has been calculated at £100,000 a-year.
There might be a straight road in this way from the Angel at Islington, to the Elephant and Castle at Walworth.
The new London bridge cost £680,232; removing the old bridge £35,600; the approaches £1,840,438. Southwark [Bridge], including the approaches, £800,000 ; Blackfriars [Bridge], ditto £210,000; Waterloo, ditto £1,000,000; Westminster, £388,700; Vauxhall, £150,000; Hungerford, £ 110,000; while the proposed bridge, to be called "St. Paul's" to be 60 feet in width, with a head-way of 27 feet 6 inches, may be erected for £144,000. The estimate of £144,000 does not include the purchase of any land or compensation to be given; but even these, from the character of the locality, maybe fairly considered less than is usual in such cases.
The sum, though moderate, is ample, and the designer, guarantees its execution within the estimate. This arises from various causes. Such works, through the incitement of railway enterprise, are better understood than they used to be. The nature of iron and its many advantages in works of this magnitude are thoroughly comprehended, and, above all, cofferdams and the old-fashioned system of pile-driving are entirely dispensed with, by a recent very ingenious application of the principles of the diving-bell.
A tube is dropped into the water, and rests upon the bed of the river. If the river is deeper than the tube ie long, other tubes are rivetted to it, until the uppermost stands above high water; an apparatus with double valves is fixed on the top and made air-tight, an air pump is then applied, and the pressure within the pipe raised until it expels the water, which cannot ooze in again, the pressure within, being greater than the density of the water without, and keeps the interior of the tube perfectly dry.
Workmen then descend,
[ knew there was a catch somewhere! Their air is under pressure. ]
dig away the ground from under the edge of the tube, which sinks by its own weight, and as it sinks other cylinders are fixed on the top, and the whole let down until they have reached a solid foundation. In this manner the tubes of one of the piers for the new bridge at Rochester were lowered 40 feet below the bed of the river and planted on the solid rock, and they could have taken it 400 feet if necessary. The material cut out is lifted up through the valves before mentioned, and when the proper depth is gained they introduce bricks and Portland cement, and fill the cavity of the tube with them, which immediately becomes as strong as stone. These tubes (being six or seven feet in diameter) are placed within two or three feet of each other and in double row, and can be extended to any length that the width of the bridge requires; they are then all braced together with beams of iron, and on the top is placed a plate of iron with transverse beams, and the cavities between, about 12 inches deep, are filled with cement, etc.
Then round all the tubes, is fixed a shield pointed up and down the river, so that all danger is warded off and injury from collision avoided. The plate described may then become the foundation for the stonework, from which the arches spring, or the plate itself may become the foundation.
Should any question arise as to the durability of the iron, or its likelihood to corrode and fall off, it has been stated by Sir Charles Fox, than whom there is no better authority, that iron in such a position, and one inch thick would last 600 years, but if it did fall off, there would still be left the solid masonry, which time could hardly destroy.
No site could be better chosen, and the cost will be only half the cost of Blackfriars, and only one fourth the expense of London bridge.

It was not built 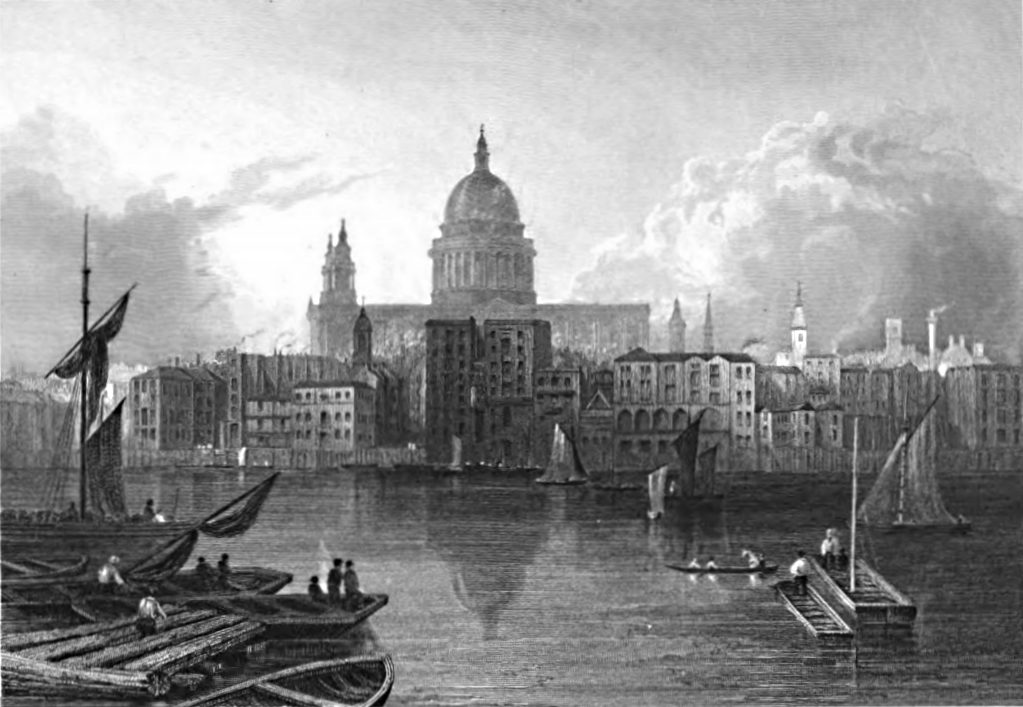 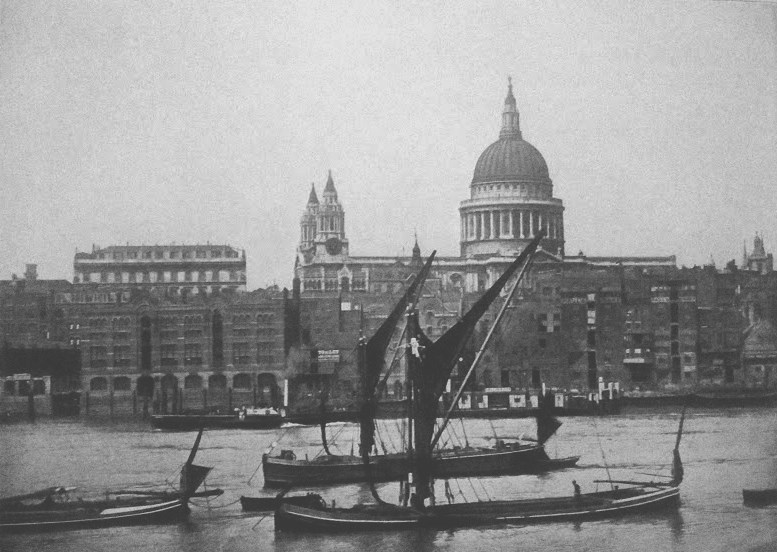