The plan of this bridge was originally proposed and brought forward by Mr. John Wyatt, with the view of forming a communication between Bankside, Southwark, and the bottom of Queen Street, Cheapside.
The celebrated engineer Rennie has the merit of the design. It consists of three arches only, of cast iron, from the foundry of Messrs. Joshua Walker and Co. of Rotherham, in Yorkshire, on massy stone piers and abutments.
This is by far the most stupendous iron bridge, and as respects its centre arch, of greater span than any other in the world. It was opened in April last. Doubt having existed with the unscientific part of the public, as to the practicability of this Herculian structure, whether it could, in the Colossean strides, span the frontiers of old father Thames, the following curious and interesting particulars cannot fail to be acceptable. The work is one of national utility and ornament. France may still boast of the number of her bridges, but since the Strand and Southwark bridges have been built, France no longer can pride herself on the superior magnitude, splendour, or costliness of such structures.
This work was begun on the 23d September, 1814, under the direction of Mr. Rennie as engineer, and Mr. Weston, sub-engineer. Messrs. Jolliffe and Banks were the contractors at a lump or specific sum, and what is rather a novelty in public works of this vast magnitude, it has been completed within the contract price. The expense of the bridge and avenues amounted to £800,000
The distance between the abutments is 708 feet. The extent of each abutment enclosed, including the land arch and invert arch is 71 feet, formed of solid masonry, all the springing stones of which weight 13 tons each, and one of granite, similar to the other parts of the bridge stone work. There are two piers 60 feet high each from the bed of the river to the top of the parapet, and 24 feet in breadth between high and low water marks, and 75 feet long, between acme and acme of the salient angles. The foundations of these piers are each about 12 feet below the bed or bottom of the river, and rest on a platform of 2 ½ feet thick of solidly compacted timber; and these platforms each further repose on about 420 piles, most of which are driven 24 feet into the earth, making the depth of the earth, from the shoe of the piles to the parapet top of the piers, 98 feet. There are three arches of iron; the two side ones are 210 feet each in span, and the centre arch is 240 feet in span, with 43 feet clear opening above low-water mark, medium tides. Thus it exceeds the admired bridge of Sunderland by 4 feet in the span, and the long famed Rialto at Venice by 167 feet. Many of the iron single or solid castings weigh 10 tons each; and the total weight of iron exceeds 5,308 tons!
The centerings of this bridge on which the arches were formed or turned, were of such a novel and peculiar construction, that the navigation of the Thames was comparatively unimpeded during the building of the bridge. The entire centering of one arch, containing 480 loads of timber, was removed in two tides, having been previously and gradually sunk by loosing of the wedges. Unlike the Pont Neuilly (near Paris,) where the centerings were all struck simultaneously, or rather thrown into the river Seine, the arches settled the surprising depth of 18 inches almost instantly. It was calculated and allowed that the centre arch of this bridge would settle at the vertex two inches, yet, in reality, it has only settled or sunk one inch 7-8ths precisely; thus the wide expanse is within one-eighth of an inch of the figure and form it was originally designed to assume. 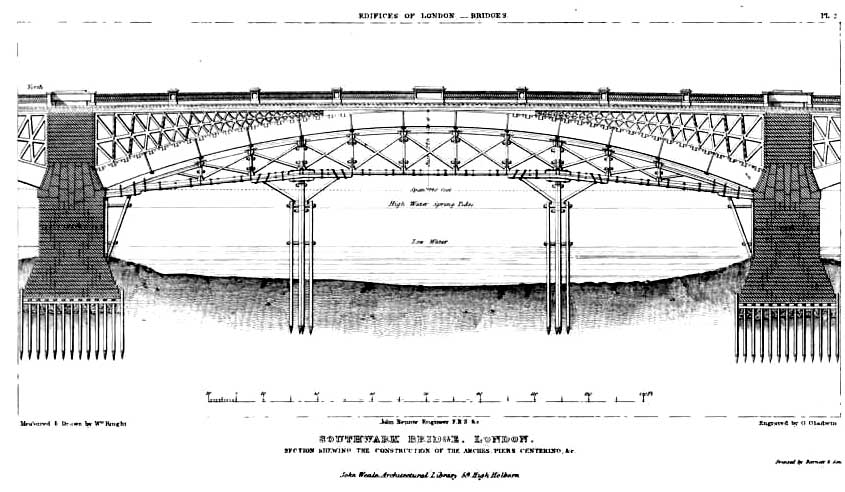 1825: from 'The Natural and Artificial Wonders of the United Kingdom' - 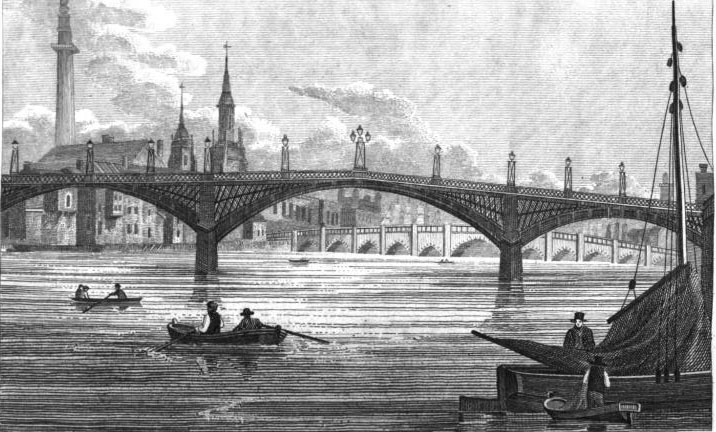 Southwark Bridge, 1825, from 'The Natural and Artifical Wonders of the United Kingdom' 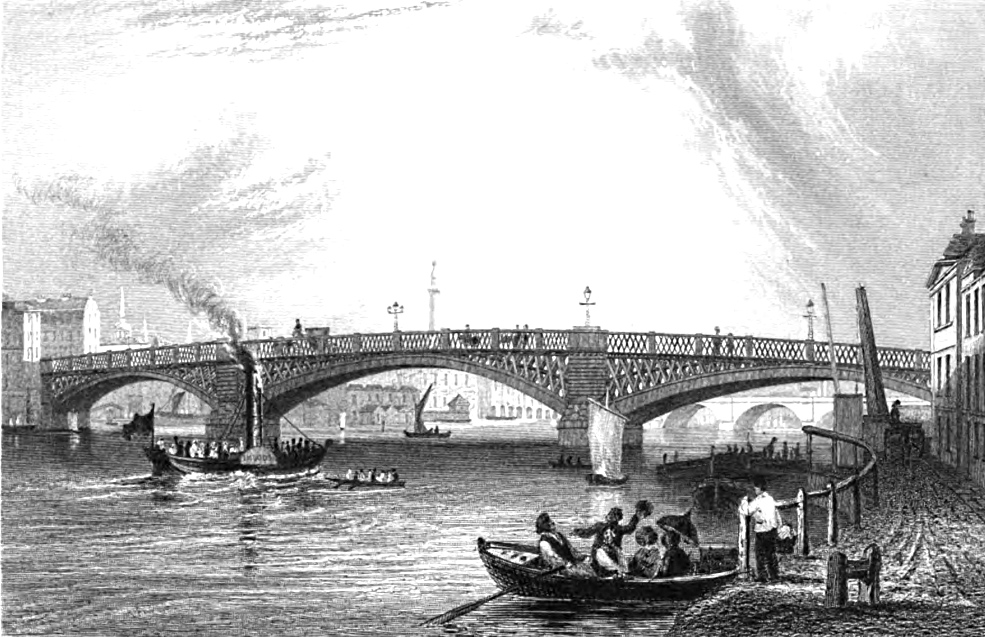 Southwark Bridge,Tombleson 1832
and here is a coloured version of 1836

1856: The removal of the old London bridge changed the tidal currents around Southwark Bridge. A survey showed that the increased currents had scoured away a considerable amount of sediment -

Several years elapsed between the first Act authorising the bridge and its completion. During this period, one shareholder at least got cold feet and published a pamphlet to say so when a further extension was being sought from Parliament.
He argued that since London Bridge and Blackfriars were the direct routes for many Southwark inhabitants, the directors had poor grounds for their optimism:
"Why they write of taking one-third, one-fourth, one-fifth, or one-sixth of the combined produce of Blackfriars and Waterloo bridges as the produce of the new Bridge, they do not condescend to state."
"Instead of calculating on an annual profit of £14,258 10s. annually, it is highly improbable that the annual revenue of the Southwark Bridge would amount for many years, and until a new town were formed at Bankside, to little more that a TENTH part of their calculations."
He was right to regret his participation. Toll revenue was only £5,044 in the first year and then fell. In 1830 it was £7,110 and in 1832 £4,544, an extraordinarily poor return on a capital cost of £660,000. In 1854 it was remarked that:
"The directors have never had any salary whatever, they have never had a halfpenny for forty years, nor even a cup of coffee," and in 1865 the Secretary of the bridge reported that dividends averaging only £2,250 had been paid to preference shareholders and nothing to ordinary shareholders.
Tolls were abandoned in 1864 when the City Corporation rented the bridge, subsequently paying £218,868 to take it over.
The bridge was a financial failure because it attracted very little vehicular traffic. Apart from the fact that Blackfriars bridge upstream and London Bridge downstream were toll-free, it suffered from approaches that were too steep for horses drawing loads. Furthermore, as indicated in the prospectus for an abortive improvement scheme:
"The utter inadequacy of the approaches have prevented the greater portion of utility to the Public which that costly structure promises to afford whenever a proper Road to it from the City shall be obtained."

Utagawa, was a relatively minor artist from an extensive lineage of woodblock printers, He probably did not visit London, and was instead working from secondhand reports.

1921: A new Southwark Bridge to a design by Sir Ernest George.  It has 5 spans which are designed so that the piers line up with those of Blackfriars' & London bridges to ease the passage of river traffic. 800 feet long, 55 feet wide Five steel arches are supported by four stone river-piers, which are topped by pierced lunettes for decoration.
Engineer: Mott, Hay and Anderson. Contractor: Sir William Arrol & Co. 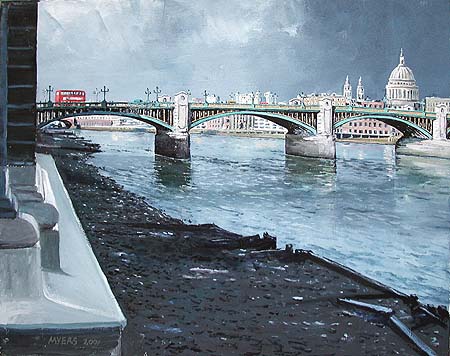 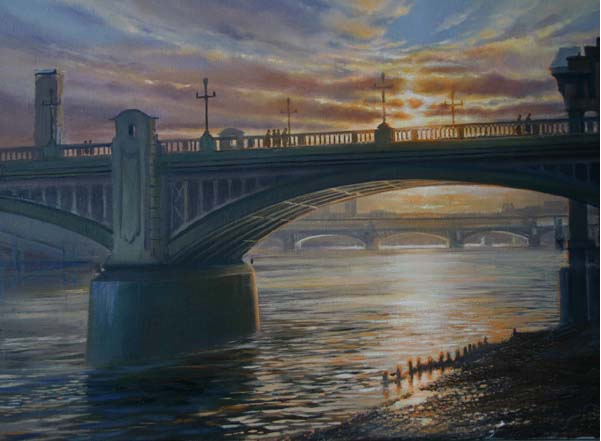 Left bank. On the South Bank of the River Thames just below Shakespeare's Globe Theatre and close to Tate Modern and the Millennium Bridge.