An attempt to understand the flow of the Thames.
The reliable online figures are in GREEN (and direct calculations made from them).
My working is shown in PINK. Sometimes this will be reliable.
In particular the Reach Drop cm per Km is firmly based on online figures and will be much more reliable than the Estimated flows.
At other times assumptions have been made that will occasionally be very wrong!
The aim has been to achieve a coherent picture (which probably means the figures add up even if they are wrong!)
They will be wrong because so many assumptions have to be made since there are insufficient flow gauges. There are three major types of assumption:
1) that the percentile of the flow in one place can be applied to another place with its own percentile table;
2) that where data is lacking the surplus or deficit of flow can be spread over the intervening places between known flows;
3) that the Intakes account for the deficits between known flows (and can be shown spread equally where there is no other information).
The picture is also complicated because the river is not static. Peaks and troughs will be going downriver and cause the figures to conflict.
Let me know if you see a better way to do it! [John at the above domain]
If you see a Tsunami coming down the river assume a mistake in my figures!
The green figures update every 15 minutes. This page is recalculated every five minutes.
See THREE ALTERNATIVE LIVE WAYS TO VISUALISE THE THAMES below. 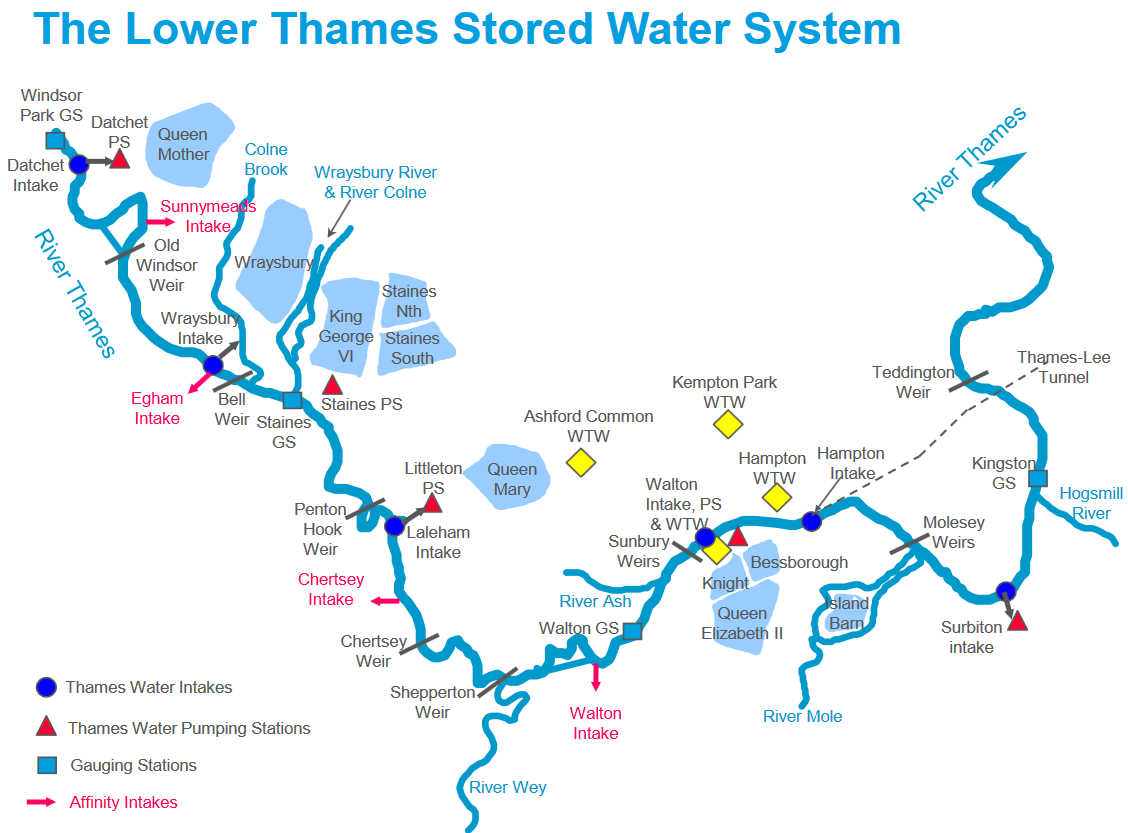 <!--1 megalitres per day is equal to 0.011574074074074 cubic meter/second. from http://www.thames21.org.uk/wp-content/uploads/2013/08/LTOA-Description-and-Operation.pdf Daily abstraction rates are therefore controlled by:The licence conditions of the M2 abstraction licence:oOverall licence: Annual maximum of 663,729Ml; daily maximum of 5,455Ml;[63.14 m/sec] daily maximum averaged over the year 1,818Ml.[21.04 M/sec] Individual intakes daily limits: Datchet 2,273Ml; [26.3 M/sec] Staines 682Ml; [7.89 M/sec] Laleham 1,364Ml; [15.79 M/sec] Walton 1,264Ml; [14.63 M/sec] Hampton 109Ml; [1.26 M/sec] Thames-Lee Tunnel 682Ml; [7.89 M/sec] Surbiton 109Ml. [1.26 M/sec] The control rules for deciding on the appropriate environmental flows (Teddington target flows, TTF) over Teddington Weir (the freshwater contribution of the River Thames to the Upper Tideway), as established through the Lower Thames ControlDiagram (LTCD), which include:oDate (in calendar year).oTotal London reservoir storage.oWater use restrictions in place (relating to Thames Water’s Level of Service).oTeddington Target Flows.Four residual flow TTF values are included in the LTCD. Normally thereis a minimum residual flow of 800Ml/d [9.26 M/sec] in the River Thames at Teddington. However, as the volume of available reservoir storage reduces, ittriggers a stepwise reduction in the Teddington flow. Each step change in TTF below 600Ml/d [6.94] requires the implementation of greater demand control measures by the Environment Agency and Thames Water, for example hosepipe bans. This stepwise reduction progresses from 800Ml/d to 600Ml/d, followed if necessary by further reductions to 400Ml/d [4.63 M/sec] and then 300Ml/d1. [3.47 M/sec] [Absolute limit 200mL/day] [2.31 M/sec] The responsibility for decisions on changes of the TTF lies with the Environment Agency (South East Area, Environment Manager)and Thames Water's Asset Management Director.1It is noted that the minimum residual flow requirement under the M2 abstraction licence is 200Ml/d, but that the LTOA is in place only down to a minimum residual flow of 300Ml/d. Formal agreement from the Environment Agency is required in order to vary the Section 20 LTOA, and operate under the M2 Licence minimum residual flow of 200Ml/d. Therefore, to operate at TTF below 300Ml/d is outside of LTOA operating limits, and has not been assessed in the Stage 1, 2 or 3 studies.