Site of Ham Mill & Weir, about half a mile below Hannington Bridge. Ham Mill was mentioned in the Domesday Book.
1870: Old Ham Weir, Henry Taunt & assistant & camera in the photograph - 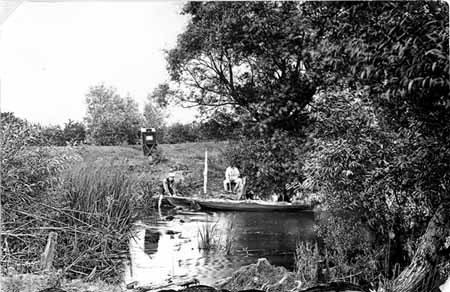 1871: Taunt - the sill of the weir remained to place stepping stones on.
I think this photograph is of the Ham Weir Site - 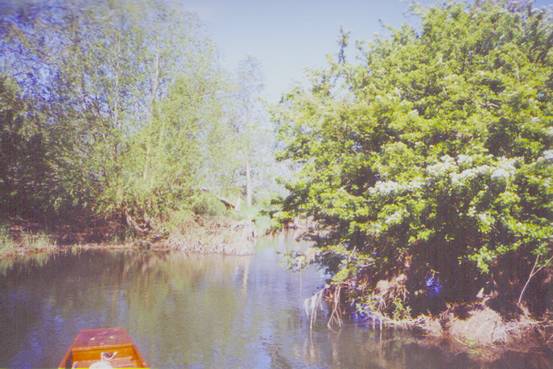 Notice the flood height on the bush on the right. At least five feet.

1909: This section in The Stripling Thames by Fred Thacker -

Hannington Bridge, with its three arches and neighbouring picturesque farmhouse, lies in the midst of the slumberous River meadows, thirty-six miles from Oxford "a large wooden bridge," said Ireland but of more durable material now.
The River divides about half a mile above, at Blackford on the skirts of Kempsford, and reunites below this bridge.
Here is perhaps the richest pasturage in the land - "an ox," says the old adage, "if left to himself, would, of all England, choose to live in the north of Wiltshire".
Between the trees in the southwest you can see Highworth church, "the glory of the Wiltshire height".
... [and somewhat earlier in his book, out of geographical order]
Along an old rough track I dropped quickly down from Highworth to Hannington Bridge; and having hidden my wallet in a bank of nettles I went half a mile downstream to see the little that is left of Ham weir. On my left rose the heathy mound of Brazen Church Hill; whence this curious name is derived I have not yet succeeded in discovering. The River was terribly choked with weeds; and I think most upward craft got stopped here in the summer of 1908. I heard rumours of a thorough dredging and clearing intended soon between Lechlade and Cricklade; and hope it may come about. The remains of Blackford weir, three quarters of a mile above Hannington Bridge, are plain to see. You could easily ford there now, and in many other places about justifying this name, and Kempsford. And having examined into these matters I ended my day's work at the George close by, with some of the very kindest of the many kind people who keep these little inns. But of Kempsford and its history I will tell you later on. 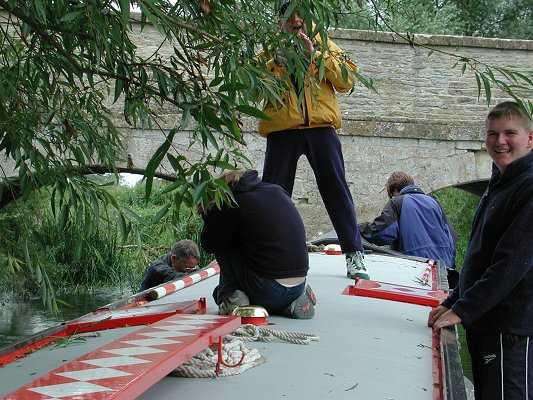 [ Photo by permission of the Tuesday Night Club ]

They had been towing a good part of the last stretch under manifold difficulties, but the approach of Hannington Bridge obliged them to stop.
"We shall smash the mast again if we don't take it out. This bridge looks lower than ever."
"We only have eleven miles to do today", remarked Martin;
"let us lie up for an hour; this last three miles has rather taken it out of me."
"I feel as limp as an eel", said Budd.
"We have had the undiscovered-country sort of feeling at last. I didn't know boating on the Thames could be so exciting."
There was plenty of cause for these remarks, for nothing could be more different from the steady swing of the sculls on Henley Reach than the mode of progression which has to be adopted above Lechlade.
Speaking in the rough, it is advisable to tow most of the way, or at least to have a tower on the bank. The word bank is scarcely accurate, for an expanse of mud and rushes hardly merit that title. You must always keep rudder lines, sculls, boat-hook, and tow-line within instant reach, and cultivate the skilful touch of the compositor in passing from one to the other as occasion demands.
Now and then there is a clear stretch of water which can be rowed or towed over without difficulty, but just as you are congratulating yourself on it there suddenly appears a bed of rushes, six feet high, stretching right across the river.
There is no way back round, so selecting the most vulnerable part you begin your attack rushing at it like on a lion on his prey. Swish! Go the sides of your boat as the rushes divide at your attack, bending under the keel sometimes and hampering your progress badly. The first rush (I mean the rush of the boat) takes you perhaps twenty feet into the opposing mass. After that you must adopt a different mode. Standing up in the boat, you must bring the boat-hooks to bear on the rushes; the sculls too are useful, as their broad tops do not sink so deep in the mud. Push against the roots of the rushes, or the rushes themselves, and be careful that the blade doesn't slip and send you toppling into the water.
Budd generally straddled the bow with his shoes and stockings off, and catching hold of the most distant rushes he could reach pulled them towards him. A yard and a half a minute is not bad racing time under such circumstances.
You emerge suddenly into a swiftly-flowing and terribly weedy stream that swings your boat completely round, unless you are quick enough to seize the sculls and pull hard. Then the towing-line is again thrown to the man on the bank, who all this time has been cooling his heels and shouting derisive remarks, and the crew settle down for a few minutes' rest.
Vain hope! In twenty yards there is a bend of the river so sharp that the tower is actually pulling the boat backwards. Shouts bring him to a not unwilling stop, and someone has to take the sculls again and pull round the corner with the assistance of a man punting with the long boat-hook, for the rudder is no good, there is not enough way on for it to take much effect.
Every few hundred yards the towing fails owing to trees, or bushes, or more rushes, or something or other; then the line has to be wound up (an awful nuisance) and the tower taken on board, unless he prefers to find a cross-country route to where there is a semblance of a path again.
This is what boating on the very Upper Thames is like, and I hope you will enjoy it.

The voyage upstream from Oxford can always be quite comfortably performed in any kind of pleasure craft till about two miles above Lechlade. From that point you may, in uncomfortable wet seasons, get to Cricklade at the very utmost; in average summers you will do no more than get a canoe to Kempsford; while at the worst you may leave the boat at Lechlade and walk the remainder of the course through meadows and rare villages that have seen no serious change the last three hundred years.
Do not attempt to force the Thames above Inglesham, in dry seasons, with a heavy laden double sculler! I tried it once, with the intrepidity of egregious inexperience; and after the third shallow contemplating a fourth I desisted, grateful enough to the god of the stream that after incredible efforts I managed successfully to force my craft back over the scours to Lechlade

It is unlikely we shall ever get to Hannington Bridge by boat.  The banks grow higher, the river-bed shallow and shingly, and sooner or later we stick fast - even a canoe would have to be carried.
The reason is plain.  Consult your map and you will see that the Thames crosses the 250 foot contour a mile above Castle Eaton. St John's Lock is 223 feet above sea level.  So there is a drop of 27 feet in the eight miles between the 250 foot contour and the last lock.  We are going up an undredged slope now, instead of up stairs, and there are bound to be shallows somewhere.

[ So a narrow boat in 1999 went two miles further than a skiff in 1949!
I went a further 9 miles in my punt.  I think conditions here are obviously variable and little reliance can be placed on individual accounts of particular years.  We always think our own experience is normal!]

The weirs and other obstructions above Lechlade having been removed, it is now possible, in fair seasons, for pleasure boats to reach Cricklade, or even beyond, with comparatively little trouble.

1692: Baskervile says that he has not seen the Hannington Bridge, but then adds a note -

Hannington Bridge is about 120 yards over the river & is built of partly stone peers partly timber posts between.  4 great stone Peeres and 4 timbers.  8 Arches besides to vent water in time of floods. 16 in all.   Covered wt timber plankes and som ??? pitch'd with stone upon the plankes.  Horse and foot people go over the bridge.  Carts wagons & coaches goe through the water by ye bridge out of wiltshier to Kempford in Glocester shire.  On Wiltshier side are 2 planks for footvoak to pass in time of floods before they come to the Arches.  Tis about 3 miles from Highworth Town.  Sanders Alehouse is in Wilts hard by the bridge.

[ Baskervile always counts the bridge approaches in the width he gives. I suppose that the banks may have been less well defined and marshy so this made sense. All the same - 120 yards for this smallest of bridges so far! ] 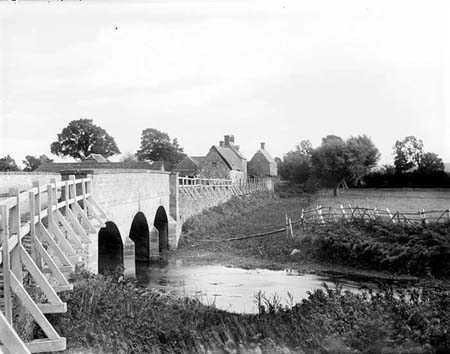 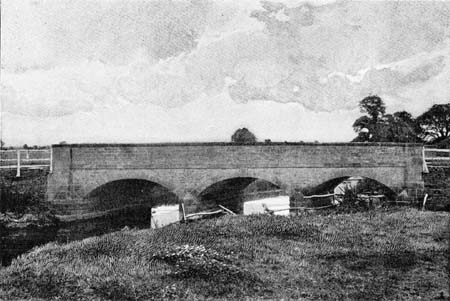 The present bridge is excessively awkward to get through:  a skewwise structure of three brick arches, with a swift stream beneath it.

Hannington Bridge. The present bridge, replacing one of timber and stone, was erected about 1841. It consists of three small segmental skew arches of stone, very difficult to negotiate even by canoes, as the stream is swift and shallow here. There is a causeway either side with flood arches. Serves local traffic needs. The river from here to Lechlade is navigable for rowing boats.

The river runs swiftly through its three narrow stone arches, with the date of rebuilding (1941) cut in the central keystone.  There is a definite dip in the river-bed at this point, and the water swirls down at a speed of something like six knots.  The depth under the bridge is meagre, and there are loose rocks;  a skiff could be dragged up only with considerable difficulty, not to say danger to her hull.

2001: I had difficulty punting through Hannington Bridge.  I had to use what punters call a half shove.  (Which means inserting the pole at 45º rather than from the vertical. It is the punting equivalent of bottom gear!) There was plenty of water to float my punt and to spare.
It is said that there are sometimes rapids below Hannington Bridge - but not the three or four times I have punted there.
Above the bridge is a substantial post, possibly used for roping boats through the bridge?  Coming downstream with the swift current it is difficult to avoid this post.  Reeds sometimes make what is almost a natural weir just above the bridge.

from Alastor by Percy Bysshe Shelley -

Now on the polished stones
It danced; like childhood laughing as it went;
Then through the plain in tranquil wandering crept
Reflecting every herb and drooping bud
That overhung its quietness.

Immediately above the bridge the shallow twists and turns were clogged with weed and even for a shallow punt it was a question of forcing a way through (in June)
1896: 'A Tale of the Thames' by Joseph Ashby-Sterry - [coming downstream in a canoe]

About half a mile below Kempsford the stream divides and joins again below Hannington Bridge, and they go pleasantly along, sometimes drifting, sometimes sailing, finding nothing especially noteworthy ...

That last comment about the stream dividing has decided me - that is an island on the left bank at Hannington Bridge and above. I was uncertain because the maps describe the left bank water as "drain".