The nearest village, that of Inglesham, has a very ancient church, small and rude in character, and strangely isolated in position, being at a considerable distance from any cluster of houses. It consists of a simple nave and chancel, a bell-tower crowning the roof, somewhat similar to that we have already pictured at Castle Eaton.

Beside the porch there is inserted in the wall the very curious piece of sculpture we here engrave. It represents the Virgin seated, and holding in her lap the Infant Saviour, who rests his left hand upon a book, while his right is extended, giving the benediction, as still practised in the Latin church. A similar benediction is given by a hand above, which is evidently intended for that of the first person of the Trinity. It is surprising how this sculpture (which may be a work of the thirteenth century, or earlier) has escaped the destruction to which so many monuments of early faith have been subjected; but it is worthy of observation that these old villages on the Thames banks retain many vestiges of a past age still unmolested: thus the steps and shaft of an old stone cross stand close to the porch at Inglesham, and we have already noted several such relics of the Romish faith in the earlier part of our tour.

Inglesham church is quite close above, on the LEFT bank.
William Morris was enthusiastic about it: "a lovely little building," he thought; "like Kelmscot for size and style, but handsomer and with more old things left in it.
"It is a tiny place, only forty-nine feet by thirty-six, and sadly needs repair; though not "restoration"; looking as though it had never been touched since the end of the twelfth century, when it was built and given by John to his favourite abbey at Beaulieu.
An archaic bas-relief of the Blessed Virgin and Child is built into the outer south wall, with a Hand pointing downwards to Him, as in a fragment at Latton by Cricklade; the whole surmounted with MARIA.
They say it was once in the priory chapel by St. John's Bridge.
In the churchyard is a fine cross fifteen feet high, unusually perfect.

About a quarter of a mile above the Canal junction.
1850: Wood's Oarsman''s Guide -

Inglesham Weir is immoveable, consequently the River is no longer navigable to Cricklade.

Inglesham Weir is immoveable, the head of the navigation on the Thames.

1868: Order for the removal of Inglesham Weir. It was removed.
1868: Squire Campbell of Buscot complained the same month of its removal, and threatened to rebuild it.  If this were objected to he said he would claim on the Conservancy for loss of water.
1909: Fred Thacker -

Do not attempt to force the Thames above Inglesham, in dry seasons, with a heavy laden double sculler!
I tried it once, with the intrepidity of egregious inexperience; and after the third shallow contemplating a fourth I desisted, grateful enough to the god of the stream that after incredible efforts I managed successfully to force my craft back over the scours to Lechlade.
It is better at such times, and with such a craft on your hands, to tramp the rest of the journey.
...
A very little way upstream the River is often, as I have just said, impracticable for anything heavier than a canoe travelling very light and easy to float over the shallows, which are frequent and shew in places but an inch or two of water rippling over the white chalk pebbles for fifty yards together.
And there are stretches of clotted reed that sullenly clog the whole width of the course for a quarter of a mile at a time.
These scours recall what must often have been the state of the River even far lower in olden days.
Dr. Plot wrote: "In dry times barges do sometimes lie aground three weeks or a month or more, as we have had sad experience in past summers."
"Flashing" was often resorted to as a relief to navigation.
Stanches were placed above the shallows to dam the River, and when suddenly removed the barges were floated down by the sudden rush of water.
These were the old "locks," or "whirlpools", of which I wrote at Osney.

There was formerly a weir here, about quarter of a mile above the Round House.  Perhaps because the navigation above this point was so neglected, none of the eighteenth century surveyors noticed it. There is a distinct weir pool and neck;  but I could find no stones or stakes.  A man told me at Godstow in the summer of 1912 that he could remember seeing craft hauled over here with a winch.

1999: Fred Thacker may not have been able to find stones in 1920, but Fred Thacker was in a skiff.  When I punted down the Thames in 1999, I slept in that pool on the punt and I distinctly remember feeling squared stones with my pole as I manoeuvred around.  I thought at the time that maybe an old wharf had collapsed into the river.  Now I know it was a weir.
The pool was so full of fish that they kept me awake all night, jumping and blowing bubbles and coming up to the punt and slapping the side with their tails (or so it seemed to me in my sleeping bag!). But I got my revenge next day - I stopped at The Trout Inn at Tadpole Bridge - and had a very satisfactory meal of Trout. 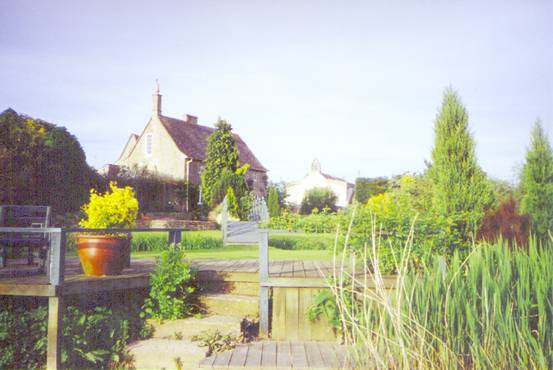 Inglesham Church and Farm looked lovely in the sunshine.

Inglesham, with its little rustic chapel and neglected churchyard, and the quiet beauty of the neighbourhood, will tempt him to linger for a few minutes.

At Inglesham there are the remains of an old weir, long the highest on the river; but there are now no more locks or weirs to be passed, though the ruins of the latter are pretty numerous. The stream by this time has narrowed to about forty feet, and often becomes very shallow.
Passing the church of Inglesham which has a curious bell-tower, and an ancient piece of carving of the Virgin and Child in the wall.
The river runs uninterruptedly on, past the junction of the Colne, past the remains of another weir, till we reach Ham Weir, just below Hannington Bridge

1896: 'A Tale of the Thames' by Joseph Ashby-Sterry - [coming downstream by canoe]

... they presently pass on their left the few houses that constitute Inglesham, with the ancient tiny church of St John the Baptist with its quaint bell-tower.
[ Which is all the more remarkable because last time I was there Inglesham was on the other bank (the left bank going upstream) ] ...
They were mightily pleased with the simplicity of the interior. Those who have the care of it have, up to the present time, had the common sense and the good taste to leave it alone. The ancient pews, the carved woodwork, and the primitive beauty of the old building are untouched, and, thank goodness, the hand of the modern restorer - who has probably done even more damage than ever was wrought by the iconoclastic soldiery of a sanctimonious regicide - with his abominable and uncomfortable pale oak benches, his flashy brasswork, his staring coloured tiles, and his garish stained-glass windows, is nowhere visible.
There was an indescribably soothful feeling about the place as they sat there and listened to the querulous clang from the quaint bell-tower overhead, and caught glimpses of the blue sky and bright green leaves, the brilliant sunshine and the pleasant fields through the narrow windows from time to time.

There are no churches in these surroundings more interesting than the humble little building at Inglesham, one mile from Lechlade, in an almost solitary situation. It is quite a rustic church, chiefly in that best period of gothic architecture, Early English, and it is so far removed from restoration, or even adequate care, that it is almost falling to pieces. Damp and neglect have wrought much havoc here, and the zealous concern of the Society for the Preservation of Ancient Buildings, by preventing any large scheme of repair, seems not unlikely to result, at no distant date, in the entire dissolution of the structure.

Around here the first signs may become apparent that we are on an uncontrolled river - that is we are above the influence of a weir.  Look for the marks of the last flood level.  When I was there it was at least two feet above the summer level.  Not much further on it was a scary five feet above summer level.

We'e'r got
Down the Isis into Red Pool,
So here we'el stop a while and cool,
Ffor Boats do oft come hither to lade
Malt, Barly, other goods to trade,
Down to Oxford, and Abingdon,
And thence in barges to London.
Ffor wharffingers, a house provides,
To keep goods dry, on Wiltshire side.

After much inquiry I gather that Redpool is at that decided elbow the River makes from an easterly to an almost northerly course about three quarters of a mile above Inglesham church.  The Left bank is in Inglesham parish;  and the spot would be, I suppose, its wharf. 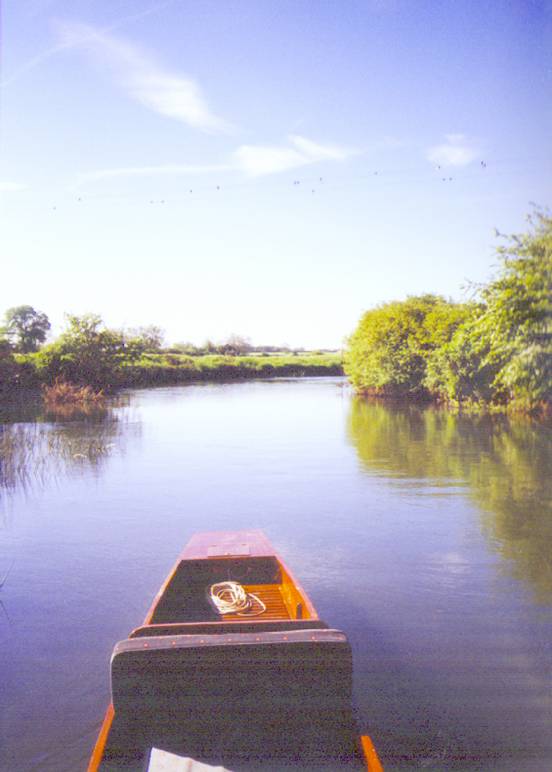 The first section above Inglesham is wide enough and generally deep enough for small launches. But the high standard of bank and tree management maintained on the main section does not apply and care will be needed on bends to avoid shallow water, submerged logs etc. 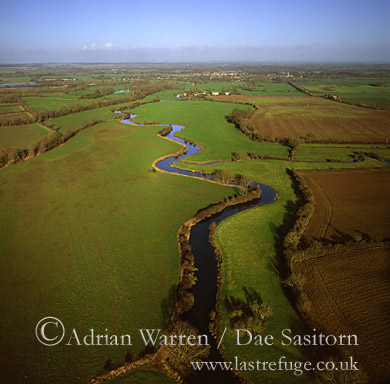