1909: This section in The Stripling Thames by Fred Thacker
1910: Thames Valley Villages, 1910, by Charles G Harper 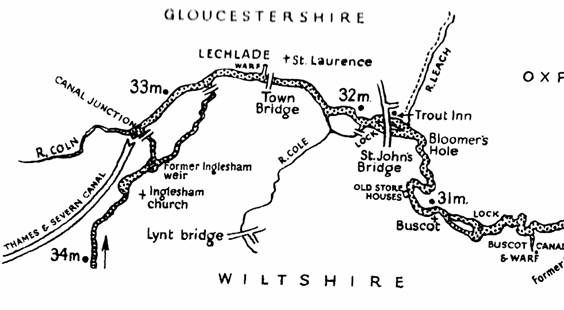 1775: a weir is shown on Bowen's map.
1790: St John's pound lock was built.
1792: the completion of the new navigation works to link up with the Thames & Severn Canal.
1830: The first lock house (on the Right bank of the lock, between weir and lock) was built.
1854: Old Father Thames statue was commissioned from Rafaelle Monti for the Crystal Palace.
Skip to 'Old father Thames at St John's Lock - the next page.
1857:  The lock was in a frightful state of delapidation;  missing gates being replaced with hurdles and straw! 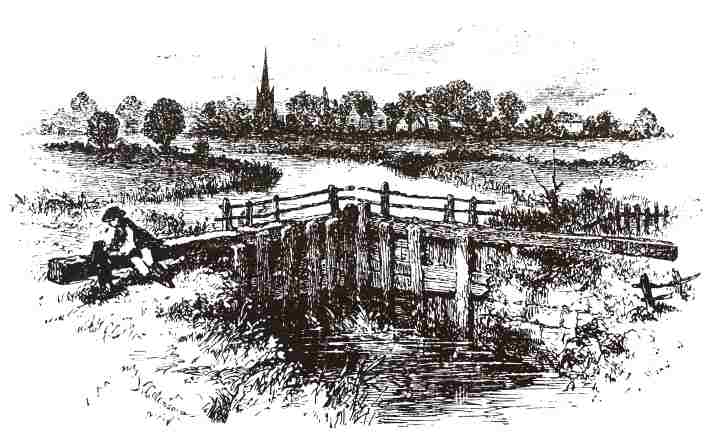 It is here we first meet a point of greater interest — The first lock on the river Thames, It is rude enough to be picturesque. This lock occurs, however, in a back-water, or rather an artificial cut, the main branch of the river flowing through the arches of St. John's Bridge, 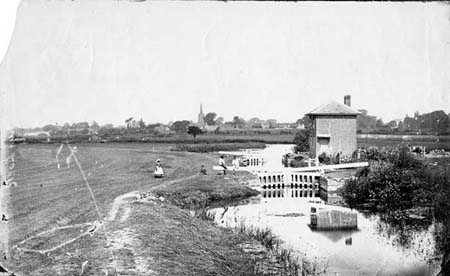 There are a lock house and garden to rest in, Thames Conservancy notices to be read, and ancient lock-keeping folk to talk with.
It is a very old lock. In the natural order of things it cannot last much longer, and at no distant date, no doubt, it will give place to one of the more useful, but infinitely more prosaic, affairs of iron, with modern improvements in the machinery, which the Conservancy supplies when it is necessary to replace the original structures.
The partly-decayed boards, the hand-rail rising from their outer edge, the lock gates patched many a time, and thinned in regard to their outer casing by many a winter flood, have done their work, and stand in weather-worn picturesqueness, all awry, doing their remaining duty as best they may. 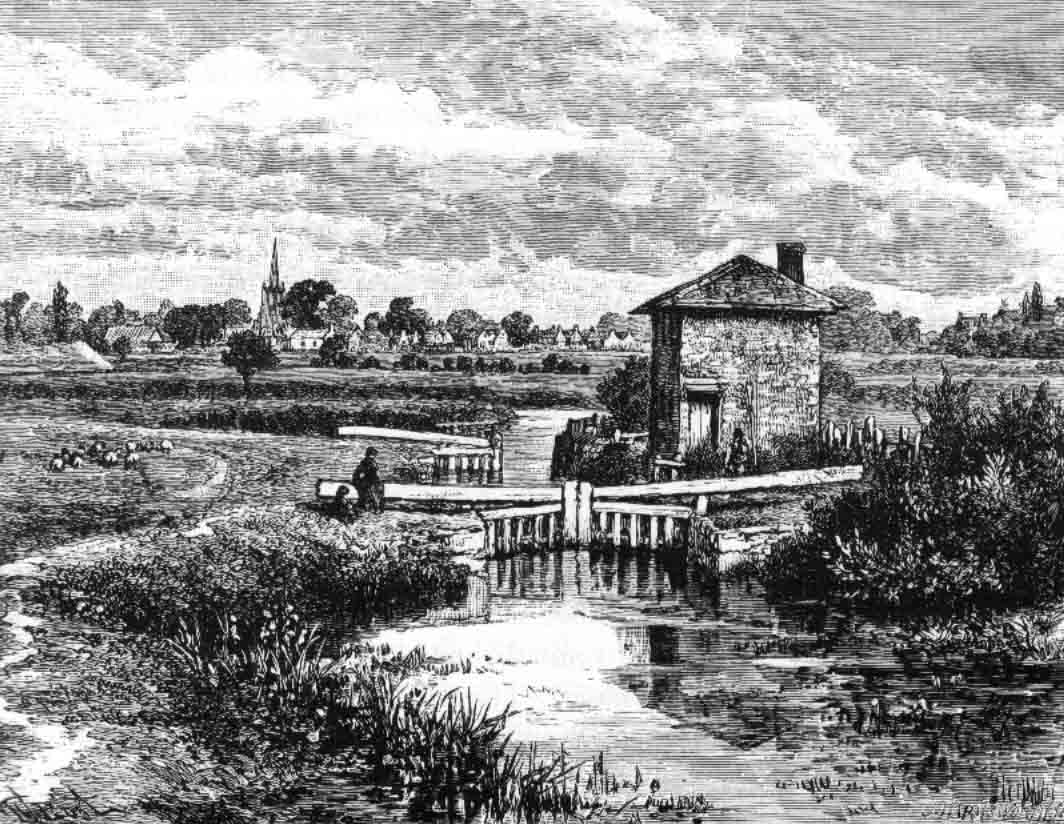 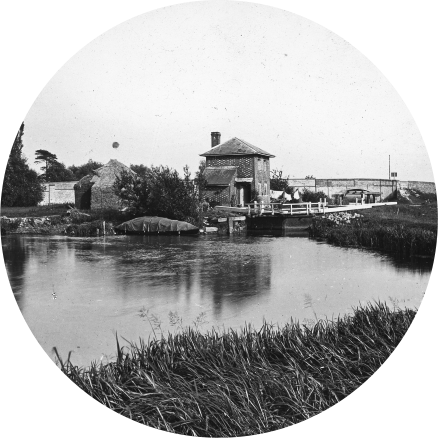 1905:  Lock rebuilt.  A new lock house was built on the current site on the Left bank, a picturesque new bungalow   (Fred Thacker adds dryly "one hears regrets for the original shanty".)
1923: Walter Higgins printed this in his book "Father Thames", however it looks to me as if the print must be earlier than 1905 because there is no sign of the new bungalow - 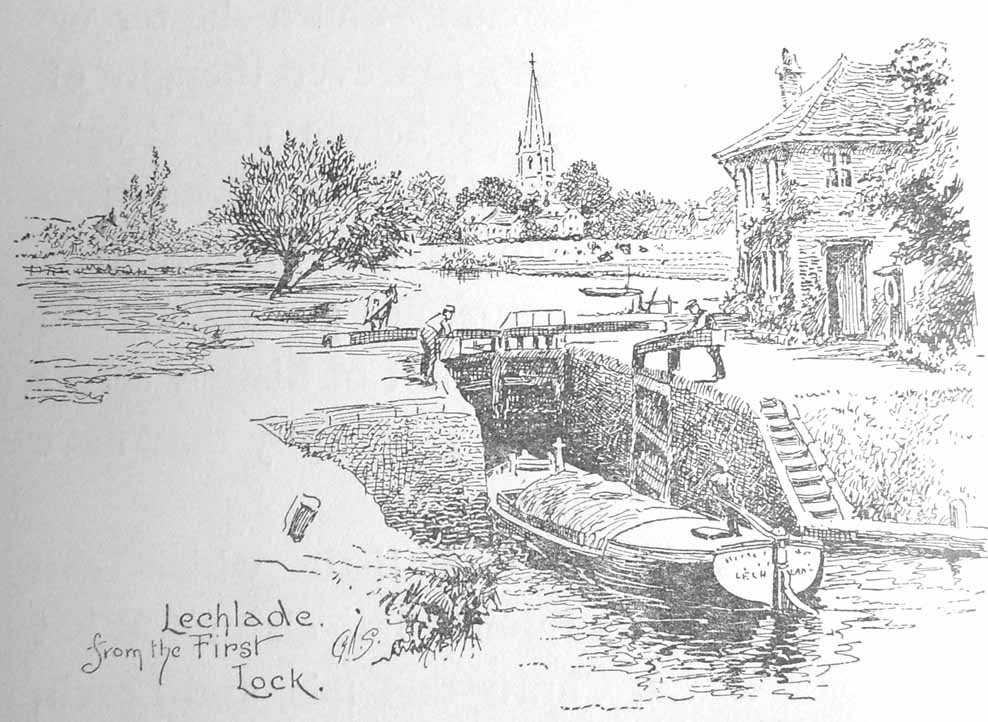 With its house and appurtenances, the lock makes a garish blot on the prevailing softness of colour: it is all startingly new; the red brick and white paint have to be greatly toned down by time and weather before they can take their proper place in the landscape. But it will take years to accomplish, and one cannot but sigh for the picturesqueness of the old lock; with its weather-worn boards, patched gates, and its pretty cottage, it took its place comfortably in the scene.
The new building is aggressive; it suggests"hustle and bustle", and seems out of place on the quiet banks of the soft flowing river. But it is in accordance with the tendency of the times - a tendency to haste and utility, at the sacrifice of beauty and leisure.
It is the day of the motor, and the river, almost as much as the roads, has been affected thereby. These upper reaches, with the advent of the motor boat, have become easy of access to the tourist whose desire it is to see all that is to be seen in the shortest possible time with the least expenditure of trouble.
Hence the capture of the river by the motorist. But it must be said that the water motorist is less unpleasant - save in his trail of petrol odour - than he of the car. He makes no noise save the rhythmical beat of the screw, and it must be acknowledged that there is even something fascinating in the smooth gliding of his boat.
We doubt, however, if the charm of the oar-propelled boat will be one whit lessened to the real lovers of the river by the easier methods offered by the motor. The delightful sense of healthy fatigue induced by a day's rowing is part of the pleasure of the river-man; it accords fittingly with the closing in of the day, when, the destination reached, oars are unshipped, the camp prepared, and the quietude of the summer night settles down upon the scene, and the river with its gentle murmur provides a pleasant lullaby. 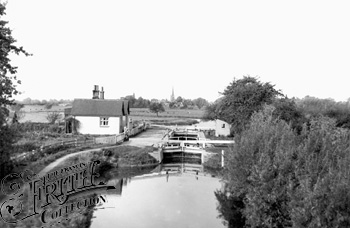 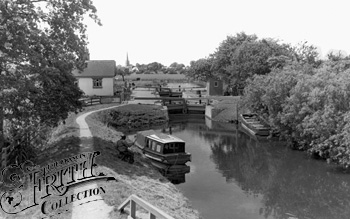 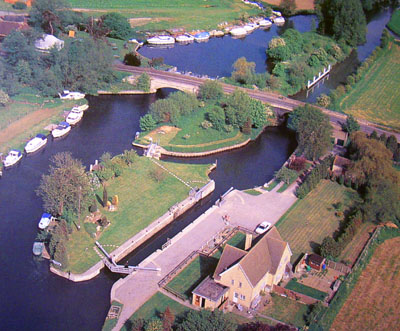 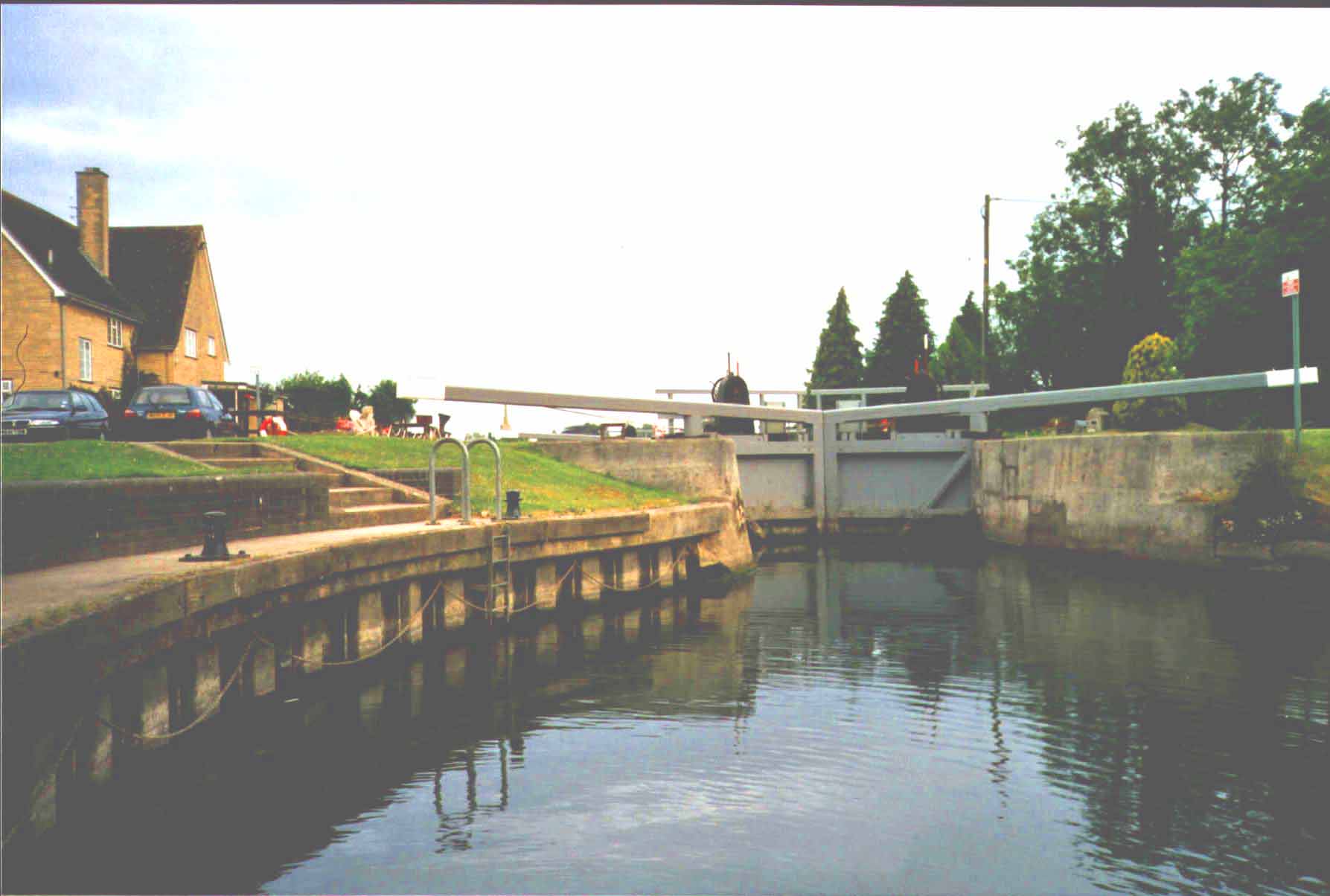 St John's Lock is the first on the Thames and still has its manual, wheel operated, paddles.  If you have to do it yourself it is a delight in comparison with the average canal lock.
The weir here is often the first to trigger the adjustment of all the weirs down the river. When the lock keeper sees a change in level he responds appropriately and then telephones the next lock down - so that a movement here can cause a ripple effect all the way down.
Above the lock there are a few more tentative meanders.  Father Thames was just practising for the full grown article below the lock.  So we zigzag across the field, past the school to Lechlade Reach which is usually lined with temporarily moored boats on the field side and on the other a tree lined bank and glimpses of Lechlade town and church.

The river is very modest hereabouts; at its widest part, in the near neighbourhood of the lock, it is not more than twenty yards across from bank to bank - a silver ribbon in the green meadows with which it is bordered on either side.
The scene is a peculiarly English one ... the red-tiled village, the grey church and bridge, framed in the rich green foliage; the verdant meadow lands surrounded again with trees, form a picture which is ever pleasing. 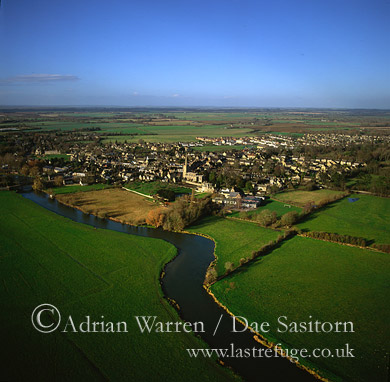 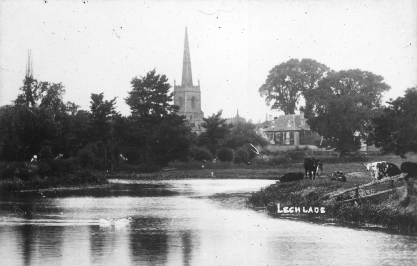 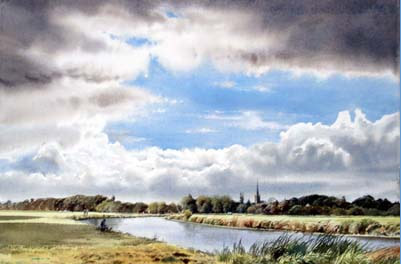