1909: This section in The Stripling Thames by Fred Thacker
1910: Thames Valley Villages, by Charles G Harper

The lock cut is unusual in that it is below the lock, and though some attempt has been made to create some current in it by a side weir just below the lock, nevertheless it silts badly.  (But maybe only us punters know that: It is the most difficult silt punting between Cricklade and Teddington. Fortunately only for fifty yards.)  The cut goes under the road and the downstream lay-by for the lock is before the bridge.
1885: The Royal River -

The river runs parallel with the lock channel under St John's Bridge, a comparatively new and good looking structure of one arch.

The early history of the bridge is inseparable from that of the Hospital of St John the Baptist, Lechlade. The lock cut bridge is of course no earlier than 1790 - much of what follows refers to the medieval bridge above the weir.
1229: medieval bridge built by monks.
1234: St John's Bridge Fair started  (five days)

The first record discovered was, a licence on the Charter Rolls in the 12th year of Henry the Third, permitting Peter Fitzherbert to build a gate at the foot of the Bridge.
Peter Fitzherbert was the second husband of Isabella Ferrers ... heiress of the manor of Lechlade, and founded during the lifetime of her first husband, Roger Mortimer, or during her widowhood, a religious house at the foot of the Bridge, which she granted to the Brothers of the hospital of Saint John at Lechlade,
"together with the Bridge of Lechlade of her the same Isabel."
This grant was confirmed in 1245 by Henry the Third.

1252: the manor of Lechlade was granted to Richard earl of Cornwall, who thus became the patron of the hospital.
1275 -

It appears by the Hundred Rolls of the 4th Edward I. (1275) that the Prior at that early date possessed a tenement in the tything of Buscot in Berkshire, in which tything one end of the Bridge abuts, and this tenement was doubtless the gift of some patriotic individual for the purpose of assisting in the repairs of the Bridge, as appears by the ensuing Records. [See 1529-]

... 12th Edward the Third (1338) when the King gave the prior of the religious house a grant of Pontage or right of taking toll for three years in aid of the repairs of the Bridge, which had become ruinous;

at the end of which period, the Bridge not having been amended, a similar grant was given by the King to the Prior;

In the 21st, 22d, 26th, and 36th years of Henry VIII. (1529 to 1544) are entries on the Court Rolls of the manor of Shrivenham in Berkshire for the tything of Buscot, that the Prior of St. John's was fined for not repairing the Bridge of Lechlade, and this liability could only have been in respect of the Prior's tenement at Buscot, as the Hospital possessed no other property within that manor or tything, and could only have become liable in respect of property within such jurisdiction.

On the suppression of Monasteries by Henry VIII. the Commissioners certified that the College of Wallingford (to which the Hospital of St. John at Lechlade then belonged,) was liable for £3 . 6s . 8d for reparations of St. John's Bridge. (Certificate in Augmentation Office.)

In the Reign of Edward VI. the Bridge had become so ruinous that the King sent a Commission down to inquire who ought to repair it, and the Commissioners having examined numerous very aged persons, certified that the Prior of St. John's (being then Dean of Wallingford) did repair the Bridge, that he had been fined at Shrivenham Court for not repairing it, and that Jacket's tenement at Buscot was liable to the repairs.

From 1579 to 1629 are constant entries on the Court Rolls of Shrivenham manor, of individuals, who were owners of property at Buscot, being fined for not repairing the Bridge, as they ought to do by tenure of those lands.

[St John's Bridge] about 140 yards in length thwarting the River between Glocester shire and Berks, it has 11 arches to vent water in time of floods but 2 of these arches are great, built over the Mainstream where loaden boats go through.
St John Bridge Fair is kept on the 29 August  in the Meadow below ye bridge on the Glocester shire side, to which Oxford boats & others resort to sell Ale, Beef & Carrots, & to carry goods from this fair down stream it is a great fair for Cattle and Cheese, and here you meet with brave sage cheese no place elsewhere in England shews the like, much diversified in figures, green and white, as to round chees, and some in shape of Dolphins and Mermaids, as Country Carvers display them in Cheesfats.

The fair is done, each maid is kist
So I crave leave to be dismist,
Away they ride, trot run and go
As fast as in the morn they flo
So overbridge I'le gallop after
And search about for other water

And here I find a stream divides
Sweet Berkshier from ye Wiltshire side
Which makes an Ile or watry ham
Between Buscot and Inglesham.

St John's and adjoining bridge, across the New Cut Near Lechlade, Samuel Ireland

Ireland sketches the scene (in 1790) from below the bridge. He shows no weir tackle; but has a vessel on the weir stream being towed downstream by men on the Trout meadow bank.

[ This seems to me to have been typical of the building of the pound locks - the barges generally seem to have continued to use the old means of ascending and descending the flash locks possibly for many years ]
It is interesting to note once again how many less trees there were in the past!

The county of Gloucester in the year 1831 indicted George Milward, Esq. the lord of the manor, the Honourable William Frederick Spencer Ponsonby, M. P., Pryce Pryce, Esq. M.P., and others, for not repairing this Bridge, which it was asserted they were bound to do, as owners of the lands formerly belonging to the priory of Saint John at Lechlade; and, to rebut this assertion, it became necessary to search the public records, in order to ascertain the history of the Bridge, and [much of the above was researched then].
The trial of the Indictment took place at Hereford, when, after two days' investigation, the jury not being able to agree were discharged, having previously suffered themselves to be locked up all night.
A second indictment had an exactly similar trial and result, so that the county failed in their attempt.
It is said that the expenditure on these two trials would have much more than rebuilt the Bridge.

A mile from the town — much less to the pedestrian — and another and much older bridge is reached — St. John's Bridge, beside which is "The Angler's Inn"
[ now The Trout Inn with campsite and slipway ]
and here "a hop, step, and jump" will lead from Gloucester into Berkshire, and from Berkshire into Oxfordshire. But bridges are now becoming numerous.

See a Taunt photograph 1870s? showing (I think) the Trout Weir pool and maybe a bridge being reconstructed?

St John's Bridge carries the Lechlade - Faringdon Road. It was originally built by the local prior in 1229, and it was probably reconstructed in the fourteenth century, according to old records. In 1795 the new bridge was built over the pound tail cut. The main bridge was rebuilt in 1820 and the lock cut bridge rebuilt in 1879: these last two comprise the existing satisfactory structure, all in stone, with one segmental arch over the main stream and weir and one similar arch over the lock cut.
There is an unsightly corrugated-iron boathouse by the bridge and inn. 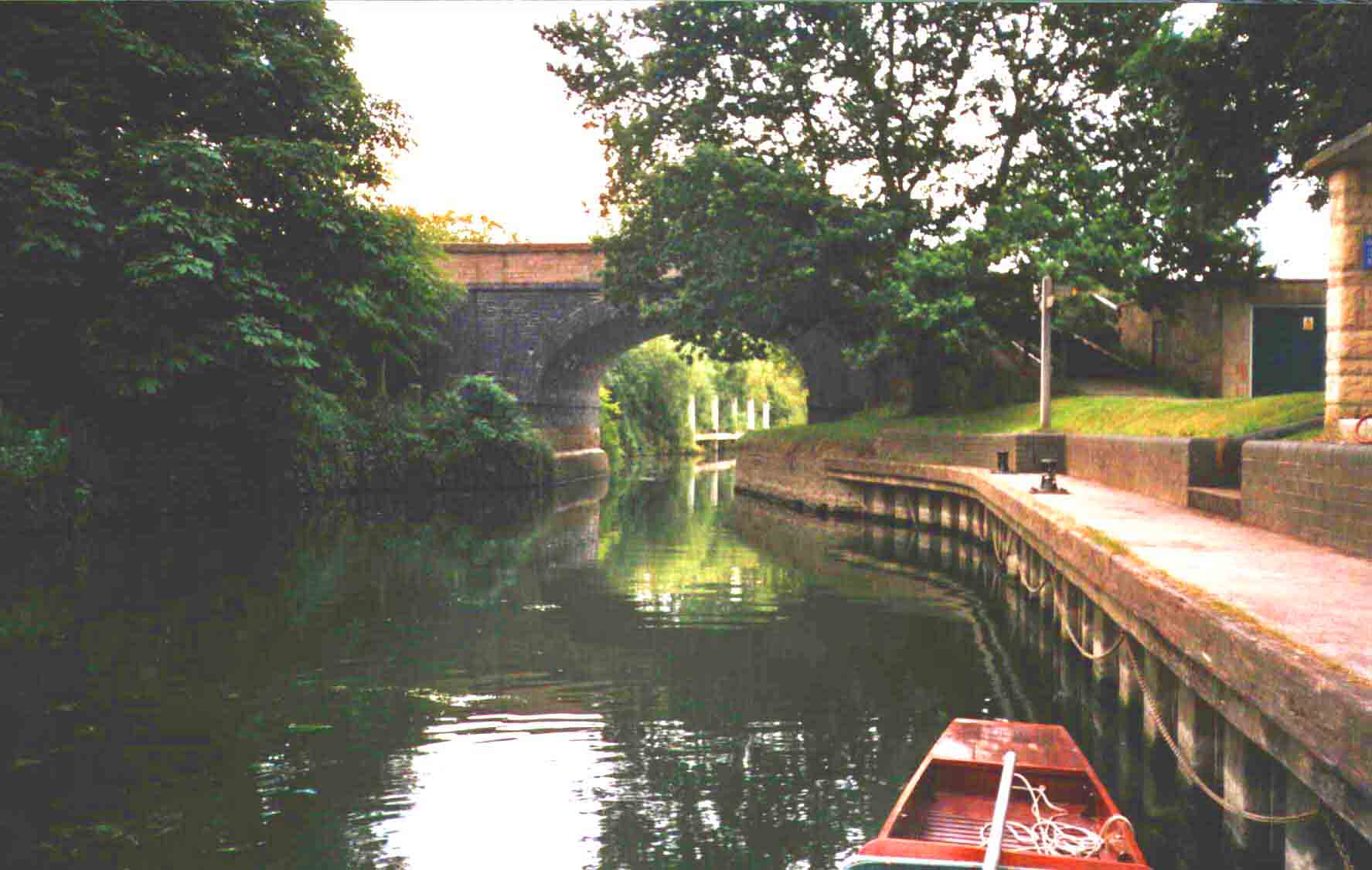 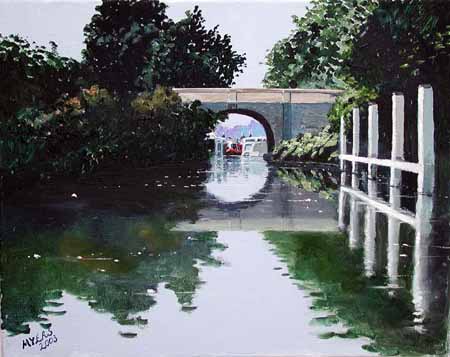