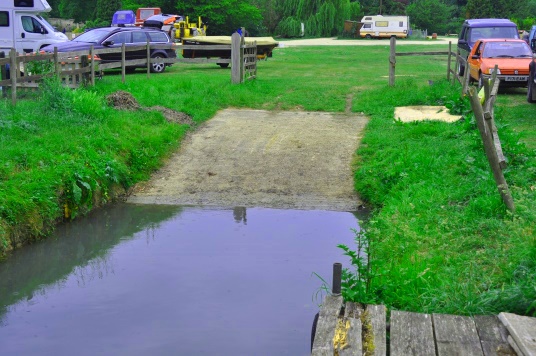 A417, Right bank of Thames east of St John's Bridge on weir stream above cut to lock

Right bank of Thames into weir stream above cut to lock

A yard or two up the River Leach.  A concrete slipway in the camping field.

Penny Warren has been proprietor of the Trout Inn, our proper pub in Lechlade for over 25 years, and her aim has always been to maintain the Trout Inn as a traditional English inn.
We have a riverside garden and during the summer we have a large marquee available for shelter. This, along with the Creel bar, which is a garden bar separate from the main building, can be booked for your party or business function. During the winter months we have a roaring log fire in the main bar, which has ancient wooden beams and some stone floors.
We are not a fast food or gastro pub, just a family run proper country inn with a good range of real ales, ciders wines and spirits, all kept in a fine condition by Scott and a kitchen run with great panache by Penny.
Our traditional pub food is home cooked to order by Penny and her team in the kitchen and all our meat is produced locally and is fully traceable. Our vegetables and salads are supplied by a local company and are always freshly prepared. We aim to offer a varied selection of dishes and always have special boards as well as our main menu. We are allergy aware, and are fully compliant with the new regulations which means we can provide you with the ingredients of any of our dishes. We offer gluten free choices and can cater to most dietary requirements. We offer a seniors' choice of two course lunch menus from Monday to Friday (excluding Bank Holidays) and we also have a children’s menu available.

A medieval foundation, first a hospital then a priory, and later a workhouse.  Known as St John the Baptist's Head until 1704 and now one of the great Thames Inns. It has moorings for visitors.

Here is hard by the bridge a very good inn for entertainment, and they have commonly strong march beer in bottles to sell, and pretty good wine, for as I remember in Leachlad there is no tavern.

Maybe the taverns in Lechlade were such that he had no memory of them the following morning?  Or perhaps he only counted inns at which gentlemen might stay? I can't see how else to explain this.

... St. John's Bridge, beside which is "The Angler's Inn"
[ now of course The Trout Inn with campsite and slipway ]
and here "a hop, step, and jump" will lead from Gloucester into Berkshire, and from Berkshire into Oxfordshire 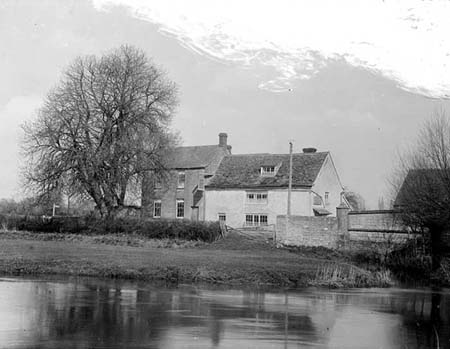 .. the old fashioned Trout Inn, still maintaining all the homely characteristics of the English countryside inn. A great sycamore overshadows it; there is an old-fashioned garden at the rear, and its little orchard, with a noble walnut-tree in the centre, offers a pathway to the pool.
There is something in the semblance of a weir at St John's Bridge, though it is of the most rudimentary kind, having fallen naturally into decay, and even into desuetude. Still the small sluices are occasionally lifted, and serviceable streams are formed to keep the pool in motion, and prevent the patriarchal trout from giving notice to quit.
At the end of St John's Bridge tradition placed the Priory of Black Canons, but of this there is no more substantial record than that of ink and paper. 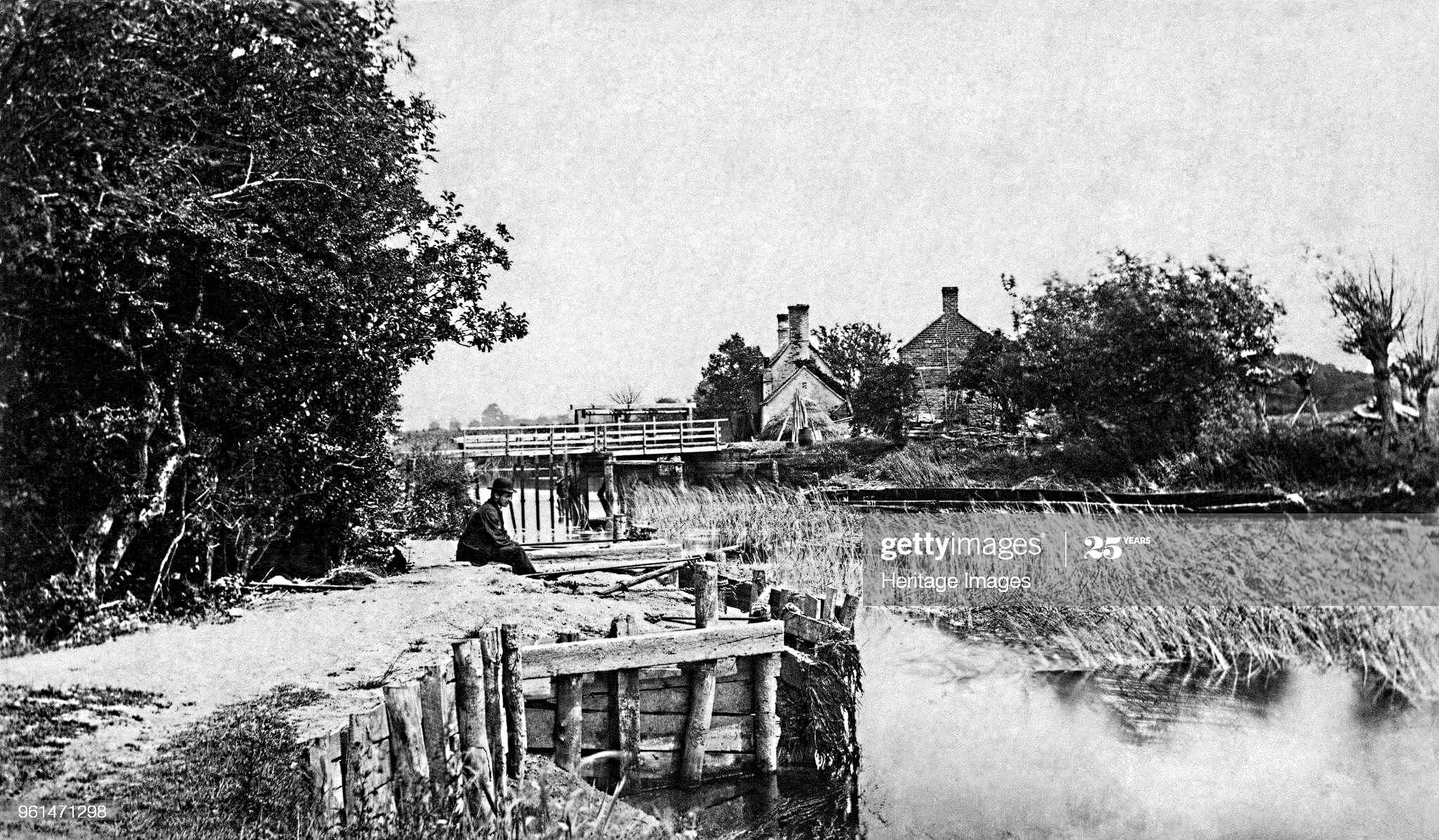 1889: A S Krausse, A Pictorial History of the Thames, the Bridge above the weir -

Hard by St John's Bridge stood in former days the Priory and Hospital of Black Canons, dedicated to St John the Baptist, from which the bridge takes its name.
The land, a meadown on the RIGHT bank, was given by Lady Isabel de Ferrers in 1245, and the priory founded through her munificence, though Richard Earl of Cornwall and his wife Senchia, are frequently given the credit of having been the founders.
Lady Isabel is also said to have founded a nunnery in the immediate neighbourhood, but of this no traces remain.
The Priory was suppressed in 1473, and the revenues devoted to the endowing of a perpetual charity for three priests in the parish of St Mary, Lechlade.
Speaking of this place, Leland wrote:
"As I rode over Isis, at the very end of St John's Bridge, on the right hand I saw a Chapelle in a meadow and great enclosure of stone waulles. Here was in hominum memoria [in living memory], a priory of blake Chanons.
When this priory was suppressed there were three cantuaries erected in the church of Lechlade, and these remained; until of late days on Underwood,dean of Wallingford, found means that two should be removed to Wallingford College."
Some of the foundation stones of the priory were unearthed in the beginning of the present century [1800-]. One of these stones is now in the possession of the Lord of the Manor, and was found when digging close to the Trout Inn.

Krausse shows what appears to be a church - perhaps the "Chapelle in a meadow" in his illustration - was he guessing - or did he have evidence of that? 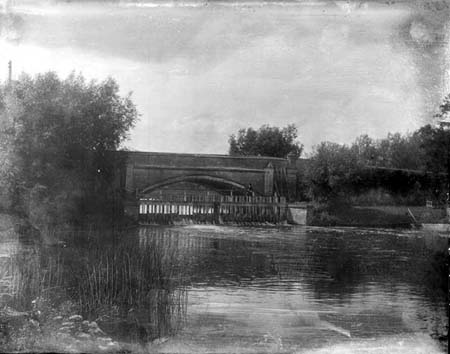 1909: The Stripling Thames by Fred Thacker -

... No doubt the Trout inn had its old name of the St. John Baptist Head from the priory; which, with the manor, formed part of the dowry of Katherine of Aragon. ... 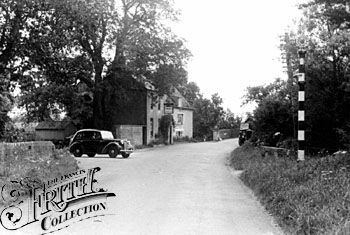 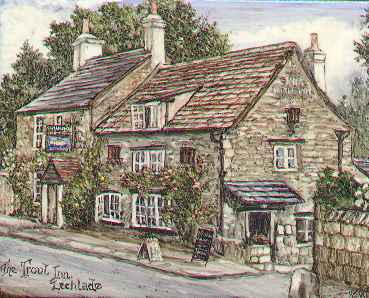 A Painting of the Trout Inn.