The only evidence being that there is is a house: Ferry Cottage

Eaton Hastings church is a mile and a half from the [Buscot] weir. It consists of a plain nave and chancel, without a tower, and is situated on a slight eminence. The scenery around is picturesque, and most perfectly pastoral. At Buscot [going downstream] "the river quits the open meads for a more secluded progress, and, having been from Inglesham a boundary of Berkshire, it now leaves for ever its native Gloucestershire, and begins to mark the limits of the county of Oxford."

After Hart's Weir [going downstream] the Thames settles down to an interval of insignificance. There is an indescribably soothing influence exercised by a river in the soft mood which characterizes the Thames throughout. How pleasant it is to be simply moving with the current, which does so much and is heard so little. Loud, even, by comparison with the murmur of the waters, is the sighing of the breezes amongst the shock heads of the willows, and the silver shiver of the poplars.
Under the spell of this influence the prosaic features of a reach like that between Hart's Weir [now Eaton footbridge] and Radcot serve as a foil for the more lovely objects. Besides, occasional descents from the higher platforms of admiration, to which special points of interest are apt to summon you, give time for reflection and observation.
Thus you will not be long in discovering that in these veritably upper reaches of the Thames what of animal life is still left may be seen without let or hindrance. The birds here are in no danger from the cockney fowler's gun. Amongst the water-fowl the most frequent appearing is the common moor-hen, which breeds as freely as ever, and still maintains it character as among the tamest of our wild birds.
The coot is less often seen, but the heron will be often disturbed from its busy occupation on the shallows. Even in much-frequented reaches of the Thames the heron may still be descried at a distance, shy, watchful, and wary. On both of the days occupied by my journey from Lechlade to Oxford I saw herons. They may have travelled twenty miles from the heronry for their nightly or early-morning forage, but you rarely can approach them within gunshot. The bird is most artful and shy at all times; but I have always fancied that the herons of the Thames Valley are most wideawake of all. They hear the thump, thump of the rowlocks half a mile off, rise from their depradations, and wing their way slowly into the centre of a field; or perchance you may see one doing sentry on the upper boughs of a tall tree.

[ I have become fascinated by the way in which wild life differentiates between my punt and the usual launch. The punt has become rare whilst the launches are relatively frequent - and as a result the wildlife is startled by the punt in a way that does not apply with launches. In particular the sudden rising of the pole has an effect on various ducks which makes me think they are wary of a thrown net. However herons with their superior sight look down on my punt and seem to realize that I am harmless. I seem to get much closer to herons than D S MacColl did, writing this section of The Royal River in 1885. ] 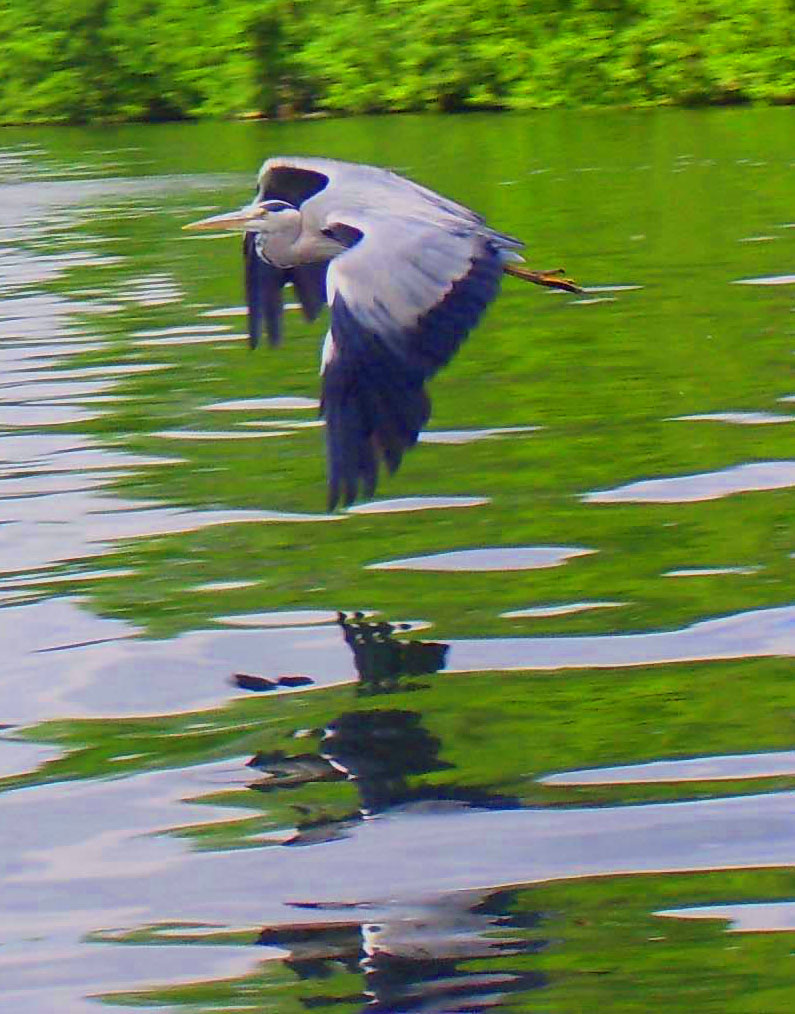 Once through [Grafton] Lock [going upstream] the River becomes very beautiful, particularly the Berkshire bank, with many charming little bends and willowed shores. The stream itself is deep and clear and strong, and here and there surprisingly broad.

In and out the "stripling Thames" winds its way, clear as crystal as it slips past green meadows and little copses. ... There is very little to note ...
Owing to the clay bed, not a town of any sort finds a place in or near the banks. Such villages as there are stand few and far between.

1842: In October the Rev. Richard Rice obtained permission to remove an island in the River opposite his land.  The Vicarage was presumably one of the houses near the church.
I think it might be possible to land from a boat to see the church - but only by asking permission, and this might be difficult. (I visited by car)

The Church of St Michael & All Angels, Eaton Hastings

The church is a mile and a half [below] the [Eaton Hastings] weir [now footbridge].
It consists of a plain nave and chancel, without a tower, and is situated on a slight eminence.  The scenery around is picturesque, and most perfectly pastoral.

Indeed so perfectly pastoral that by road it may be difficult to find! 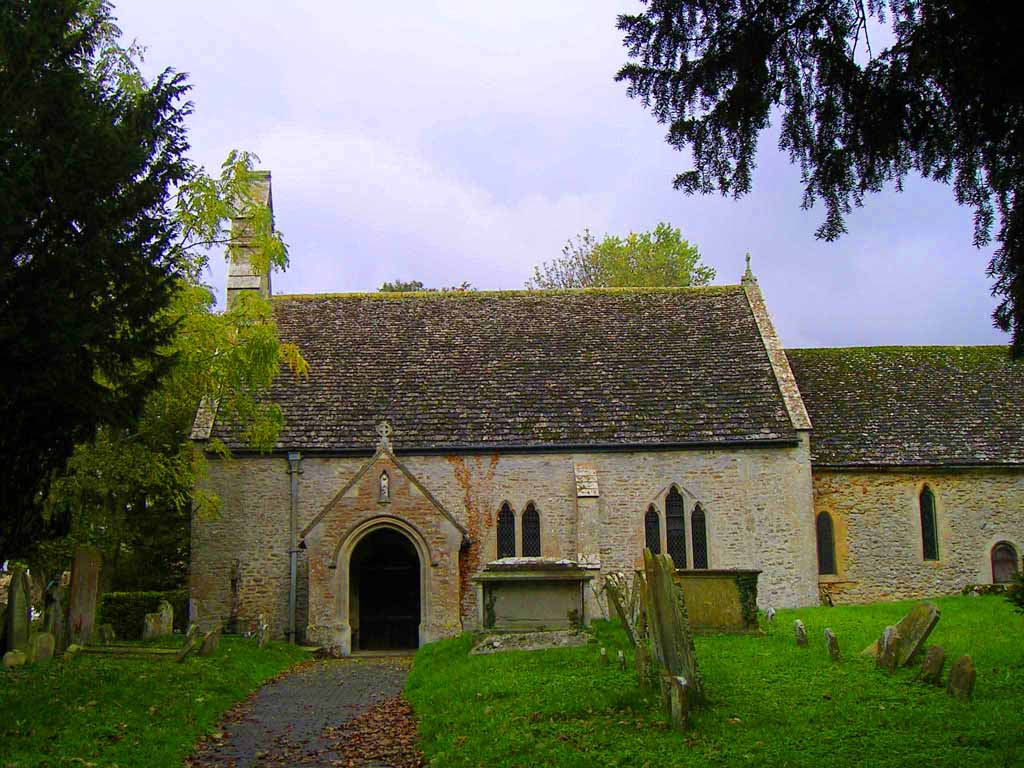 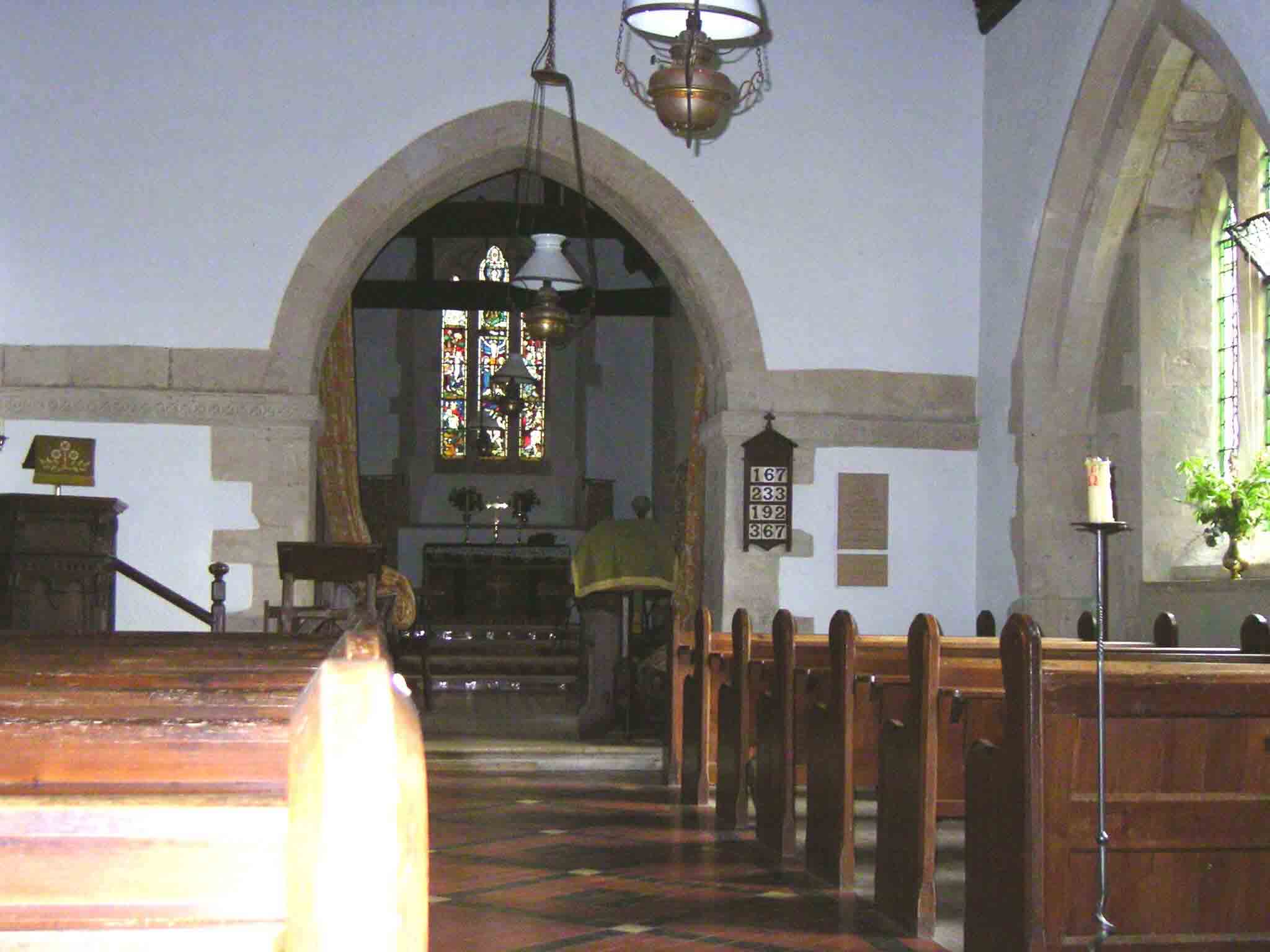 ...the little solitary church of Eaton Hastings looks down from its grassy hillock close beside the stream. Its name in Domesday is "Etona". It was built when the Pointed was blending with the Norman, and is dedicated, being upon a knoll of sorts, to St Michael and All Angels. Its east window is said to be by William Morris. It endured restoration in 1874, and contains nothing that leaps very suddenly to the eye, unless perhaps its ancient font with the enormously massive plinth [said in 2000 to be on a modern base, see below] and an old carved pulpit like the one at Great Coxwell.
I call it solitary; for though there are one or two farm buildings near, what village there is lies a long mile away inland. Someone seems to have called Eaton Hastings "the capital of the Eaton district"; it is a greater compliment to the village than to its dependencies. A capital should be more handsomely equipped, for example, than with a mere baking powder box in which to post one's letters.
But that notwithstanding, it is a lovely walk I shall not forget, up the rising meadow road from the River, faced by the hanging Eaton woods, with Lechlade spire soaring skyward in the purple valley in the west. 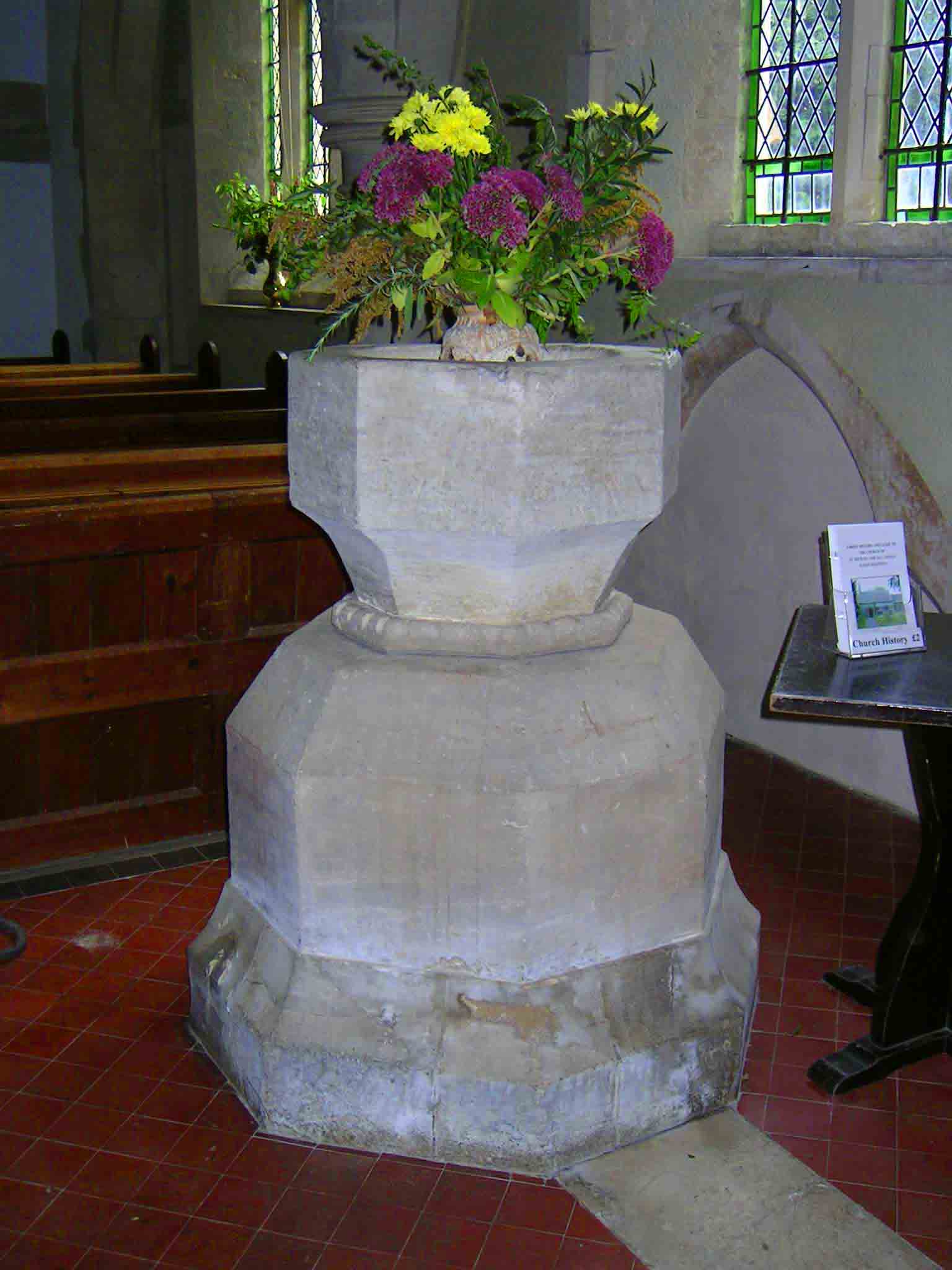 The base  of this ancient font is modern.
The west window is of 1935, by Morris and Co, to designs of the 1860s.  William Morris himself designed the Archangels Raphael and Gabriel, and Ford Maddox Brown, the patronal saint, the Archangel Michael in the Centre. 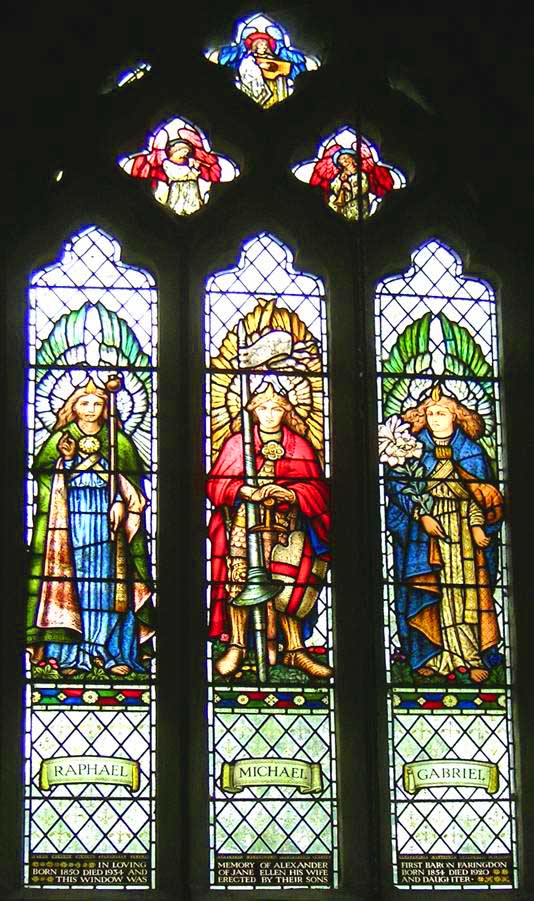 On the north side of the nave in St Michael & All Angels, Eaton Hastings, is this lovely St Matthew by Burne Jones in 1872-4 installed by Morris & Co. 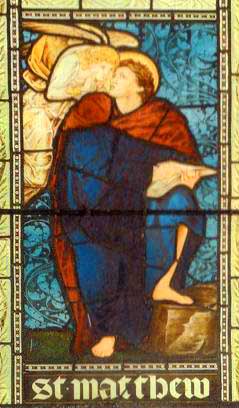 St Matthew, Burne Jones
I think the angel may be whispering: "Go on, you can write a better Gospel!"

There is another Burne Jones design on the north side of the chancel.
Parts of the church are 11th century.
The chancel is mainly 13th century.
The Victorian restoration was by Champion, 1870-1873.
In 1977 the roof was restored.
A new vestry was added in 1981.