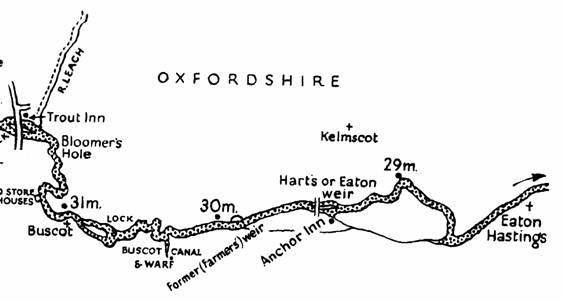 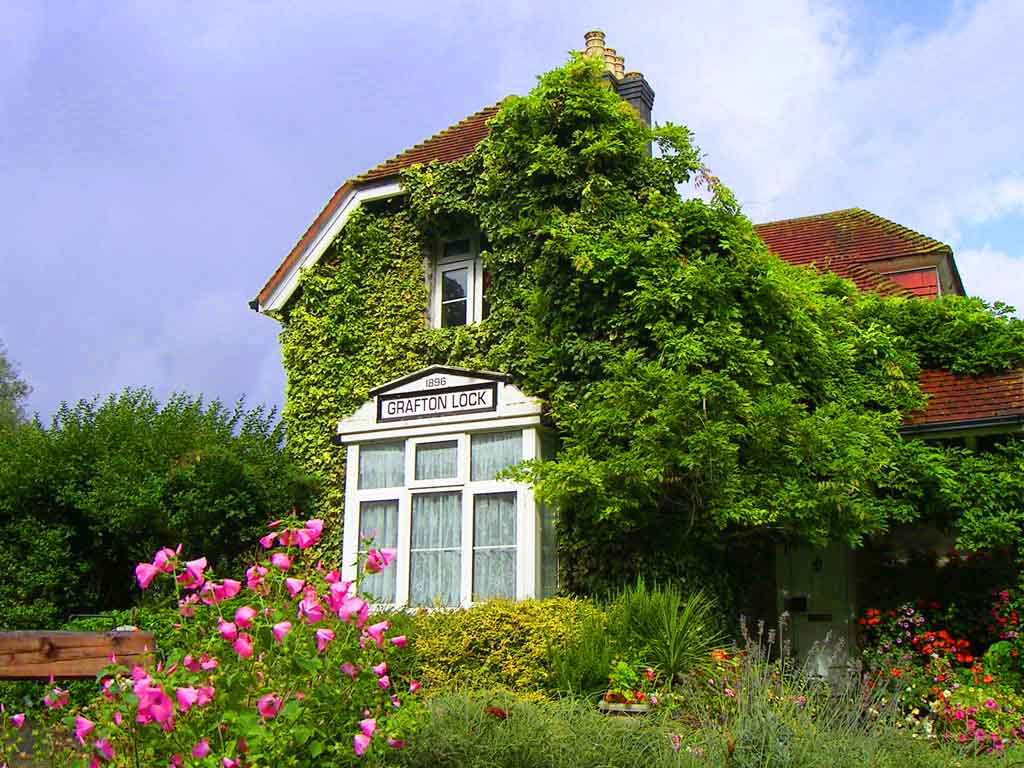 The wide water above [Grafton Lock] was originally the old weir pool [of Days Weir] and some stones are still embedded in the Right bank at the narrow neck, easy to discern as you scull thereby, which may have formed part of the flashlock.

At Mrs Hart's Lower Wear (formerly called Day's, otherwise New Lock Wear) there is no pound lock, but I would recommend one, the distance being a mile and three quarters from the last.

The site of the lock seemed in 1910 particularly lonely and inacessible except by water. Radcot Bridge, a mile and a half downstream, was the keeper's nearest contact with supplies. Faringdon would deliver so far for him; and down to the bridge he must trudge, or shove a punt, for his coal and other necessities. For milk, with which in such a country you might fancy the very ditches would overflow, he had to walk three miles every morning, an adjacent farm finding it too troublesome to save him a supply from its London despatches. For a doctor, a priest, or a crack with a neighbour, he might as well be in the proverbial backwoods.

... I descry three "herns" [herons] in one meadow that had been .. disturbed by our gliding boat. As they stand motionless and lank in the fields, on a fence, or in the tree-tops, only a practised eye can identify them.
In summer time, though rarely, you put up a couple of wild ducks from the main river.
The boating man, as may be supposed, meets with less bird life than the pedestrian, who, stealthily walking on the grass, will often obtain a passing flash of a kingfisher, or witness the alarmed flight of rarer birds.
My [D S MacColl in 1885] July voyage brings me into constant companionship with troops of the wanton lapwing, in glorious plumage and full of noisy life; rooks, as a matter of course, busy, self-satisfied, and radiant in their blue-black vesture; swallows, swifts, sand martins, and reed warblers. The common sandpiper is about upon the shallows where the streams run swiftly, and the elegant water wagtails abound.
At intervals throughout the day, near shrubby undergrowths and open meadows, the music of skylarks, thrush or blackbird charms the ear, though the eye seeks in vain the whereabouts of the performers.
Foor footed creatures are few. The merry vole is an exception, and in some of the woods the cautious searcher may find squirrels in active play.
The otter, seldom seen by the human eye in broad daylight, is plentiful enough in the earlier stages of the Thames, and of them, as of other wild creatures, it may be generally said that they are not so harried and wantonly destroyed as in the middle and lower parts of the river.

[ For wildlife see also the next, Eaton Hastings, section. ]

On a Fisherman and the Quest for Peace
In that part of the Thames where the river begins to feel its life before it knows its name the counties play with it upon either side. It is not yet a boundary. The parishes upon the northern bank are sometimes as truly Wiltshire as those to the south. The men upon the farms that look at each other over the water are close neighbours; they use the same words and the way they build their houses is the same. Between them runs the beginning of the Thames.
From the surface of the water the whole prospect is sky, bounded by reeds; but sitting up in one's canoe one sees between the reeds distant hills to the southward, or, on the north, trees in groups, and now and then the roofs of a village; more often the lonely group of a steading with a church close by.
Floating down this stream quite silently, but rather swiftly upon a summer's day ...

This is an area of unimproved neutral grassland on damp alluvial soils, adjacent to the Thames and subject to regular floods in winter. Unlike most of the pasture land of this area, Grafton Lock Meadow has not been improved with modern inorganic fertilisers and has long been managed traditionally for hay and autumn pasture. This management has produced a wide and diverse range of wild flowers characteristic of old hay meadows such as meadow-rue Thalictrum flavum, yellow rattle Rhinanthus minor, meadowsweet Filipendula ulmaria, pepper saxifrage Silaum silaus, cowslip Primula veris, adder's tongue Ophioglossum vulgatum and at least eighteen species of wild grasses dominated by meadow barley Hordeum secalinum and Yorkshire Fog Holcus lanatus. Especially notable is a population of the rare and declining snake's-head fritillary Fritillaria meleagris which produces between 50 and 200 flower heads annually in two separate areas. The water table of the meadow varies from the wet sedge-dominated sward at the southern side to the relatively dry western side. Moderately calcicolous species such as quaking grass Briza media, goat's-beard Tragopogon pratensis and lady's bedstraw Galium verum are frequent, especially in the drier parts of the meadow. Further variety is provided by the river bank vegetation, an old hedge along the southern boundary and lines of crack willow trees.

Otters have recently returned to the river near here.