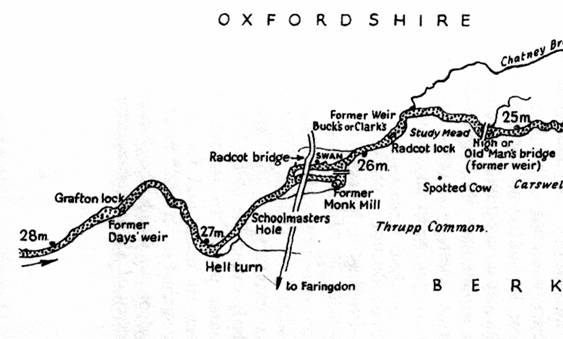 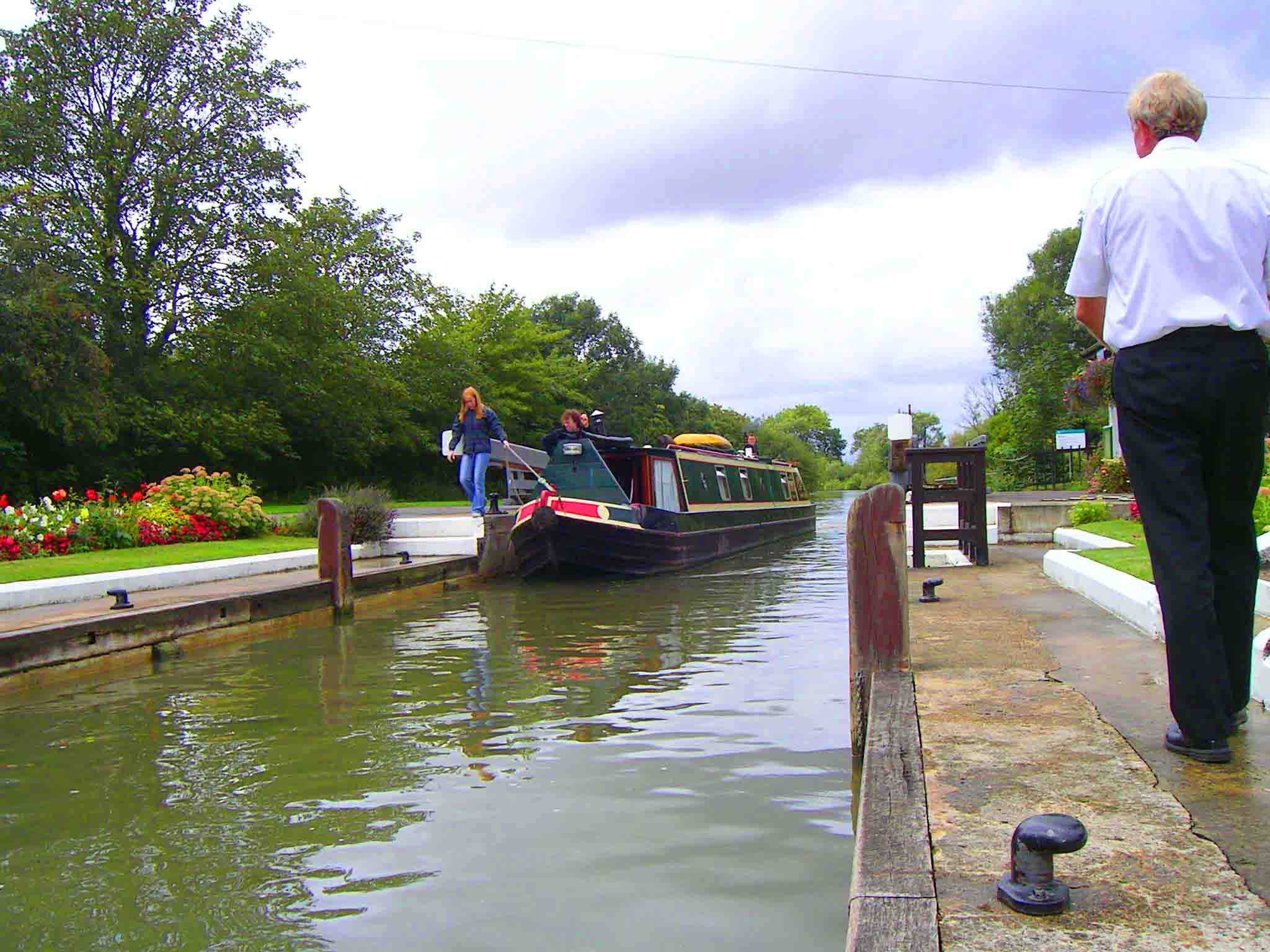 A rude railing stretches across the stream from a group of willows on one side, to a bank with two thatched habitations on the other:  of singular form and peculiar neatness.  The inhabitants employ their industry in two elements:  to till the earth, and to fish the water.

found it all open, the usual practice. It belongs to Major Gorges, whose tonnage has been raised from £30 to £50 a year, while all remains in the same neglected state.

1811: Radcot Weir in The Thames, or Graphic illustrations of seats, villas ... 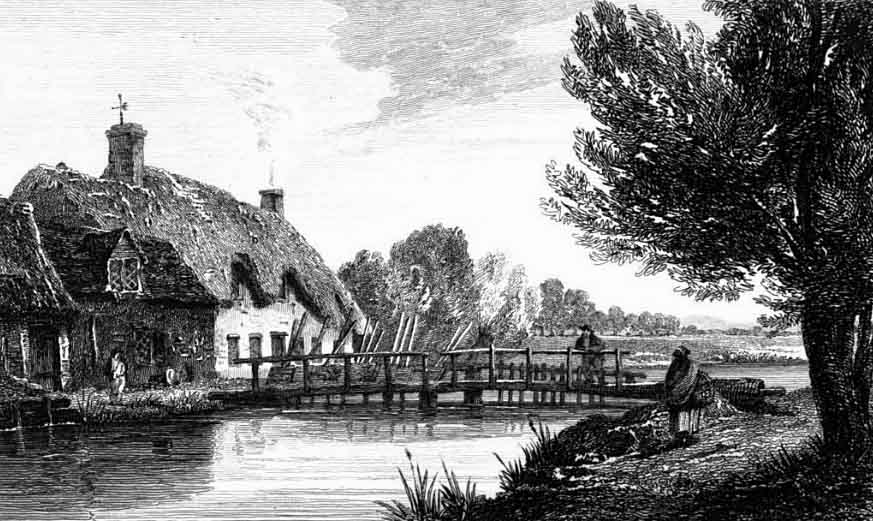 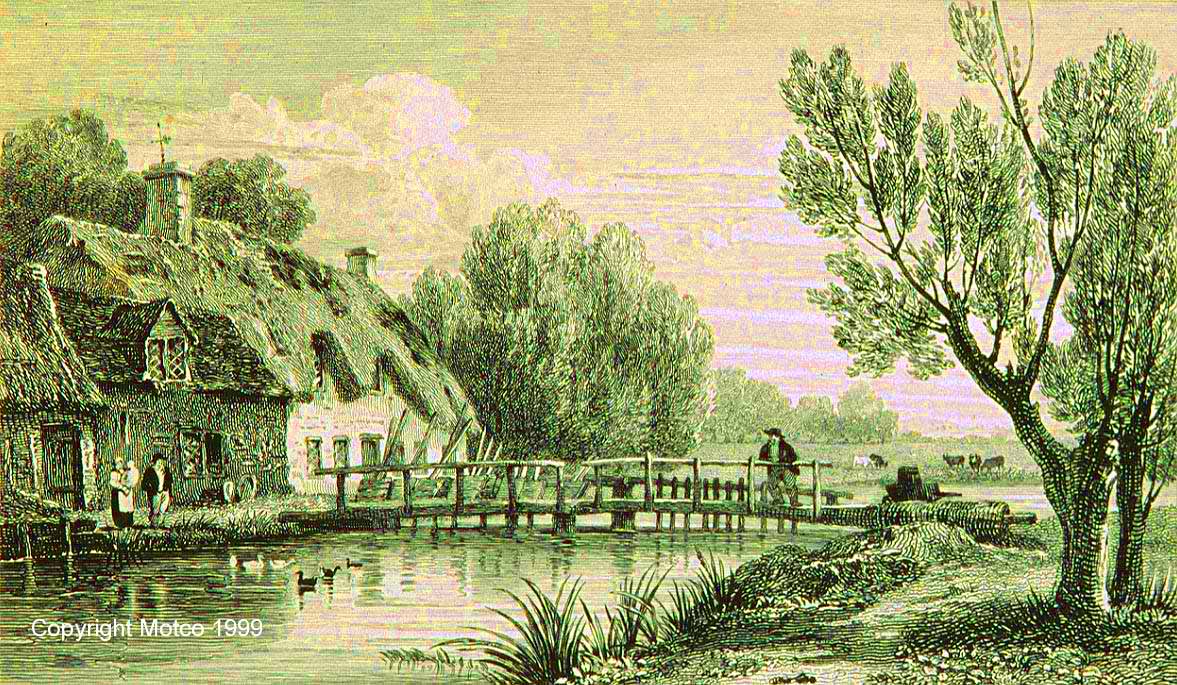 RADCOT WEIR.
This spot, which is at some distance below Radcot bridge, near Faringdon, in the county of Berks, displays a charming little picture of rustic scenery. These weirs, which are very frequent in the upper part of the Thames, and give a very pleasing variety to it, are artificial dams, or banks, carried across the river, in order to pen up the water to a certain height, for the services of the mill, the fishery, and the navigation.
A large range of frame-work, which resembles the railing of a bridge, rises from the bank below, and supports a number of small flood gates, sliding in grooves, and connected with a sill in the bottom. When these are drawn up, the whole body of the stream, being collected into a narrow space, rushes through with great rapidity, and gives a temporary depth to the shallows, or, by the power of the current, forces the barges over them.
This machinery never fails, in a greater or less degree, to attract attention: in its most simple state, it affords variety to the view, breaks the line of the river, produces some kind of waterfall, and gives activity and eddy to the current.
But these weirs are generally connected with various accessory and diversifying circumstances; the mill, the fisherman's hut, or the cottage of the person who collects the toll, sometimes embowered in trees, but always connected with them, heighten and vary the character and humble beauties of the scene.
When the river is high, the overfall of the water forms a large cascade; but at all times the upper stream forces its way; in some parts, spouting through the apertures of the flood gates; in others, fretting through the moss-grown timbers, or rushing over the aquatic plants that cling to the frame-work; and thus, broken into a thousand various rills, falls into the lower water, and continues, - as it enlivens the course of the river.
Radcot Weir is a very picturesque example of these necessary appendages to the upper division of the Thames navigation, and possesses a full proportion of the landscape effect which has just been described: it is a scene where the eye, satiated with the glare of extensive prospect, may delight to repose.

Half a mile upstream [from Old Man's Footbridge] is Radcot weir, known also as Buck's or Beck's. Its lock garden is always a gay parterre of flowers in their season; the fine old keeper told me in 1906 with great satisfaction that he had taken the Coservancy prize for the prettiest show between Oxford and Lechlade; and he had it again in following summers.

1951: Edward Ardizzone, from Sketches from A holiday Afloat -

Decide that there is a sinister quality about locks that we don't get used too.