Rushey Lock has a complete paddle and Rymer weir. 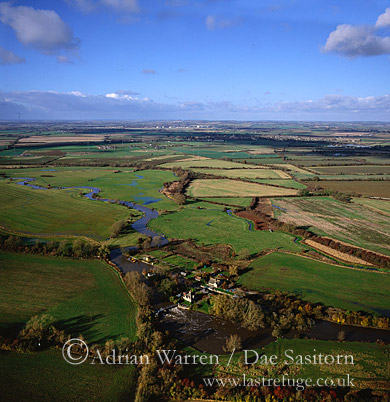 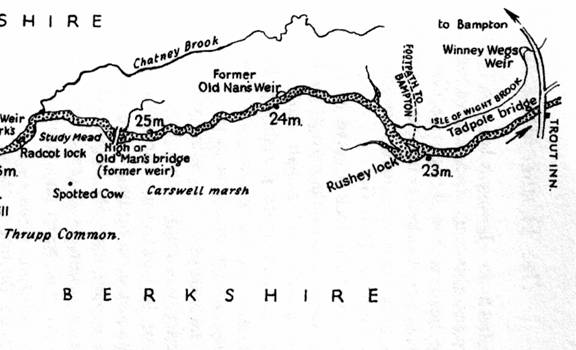 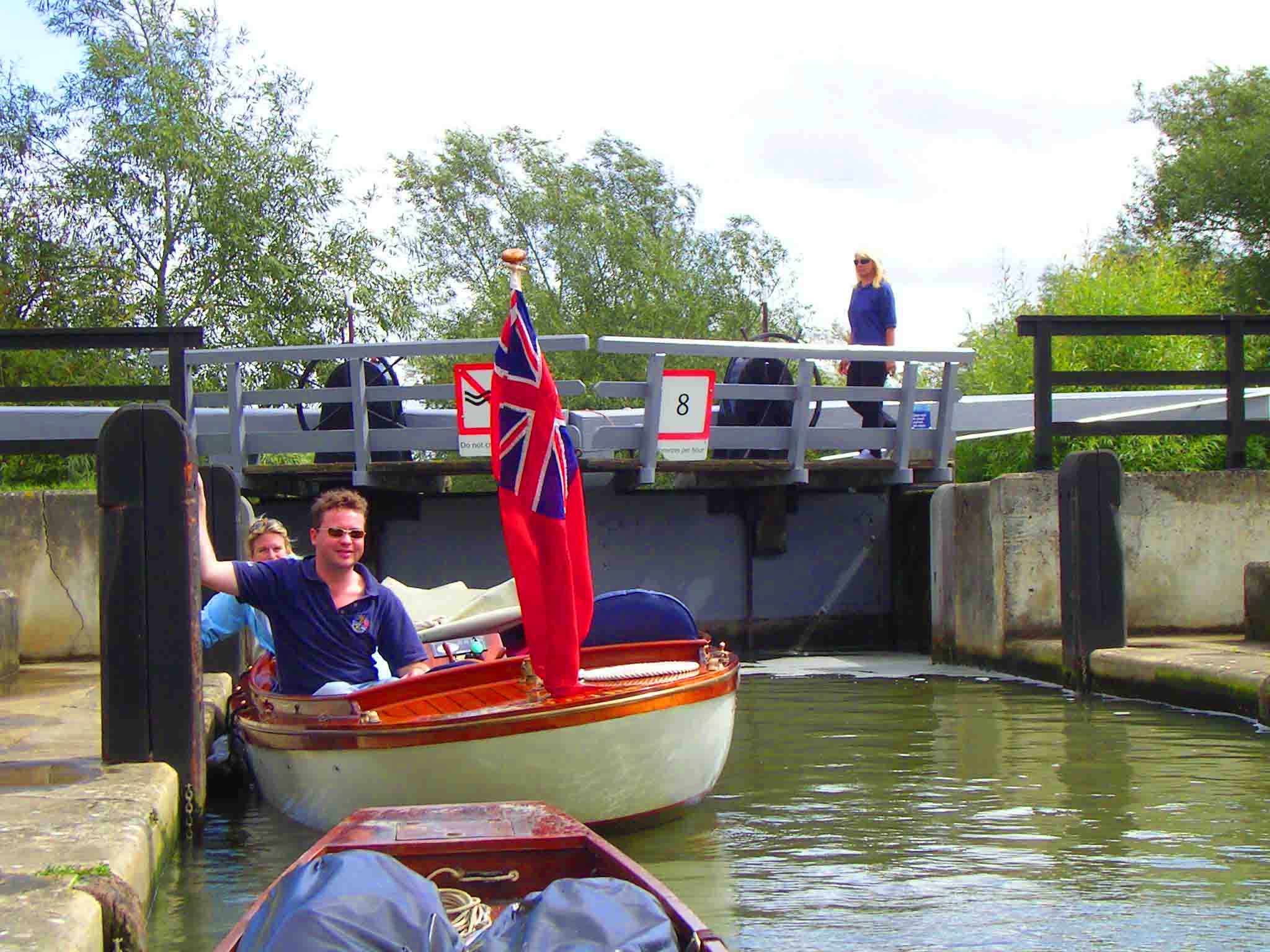 In a most frightful state of dilapidation.  It only had two gates out of four, and it was stuffed up with hurdles, and straw, and that sort of thing, to keep the water up to a certain height. 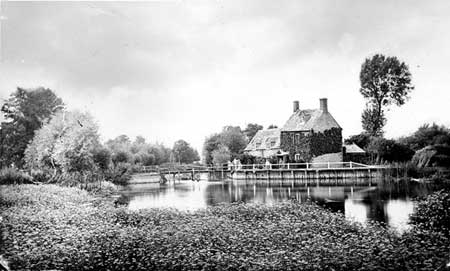 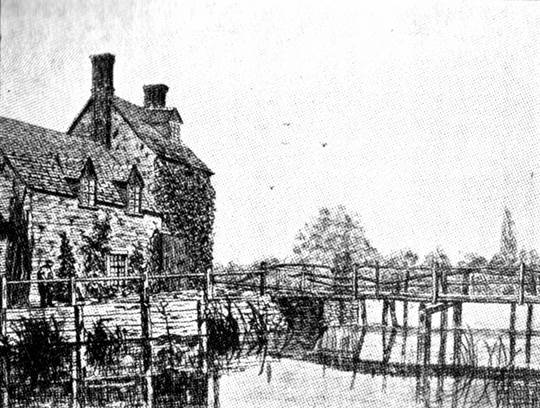 The country immediately bordering on the river is sparsely populated, and the world must revolve somewhat slowly for those who live here.  Some indication of this may be gathered from the fact that at Rushy(sic) Lock, where there is a fine weir and pool, we had the pleasure of being our own lock keeper, opening the heavy gates, letting in the water, and releasing ourselves.  The labour accomplished, a small urchin of six years of age was sharp enough to put in an appearance in time to take the toll;  it was evident, however that traffic was so unexpected that he alone had been left in charge.

Within sight from the crown of [Tadpole Bridge] lies well loved Rushey Lock, where Tom Weal serves the Conservancy: "it takes him in the knees" says he. Big slow Tom is a character I remember with affection. Many a talk I have had with him on his white-railed lock in the cool of the evening, watching Bampton spire piercing the lemon clearness above the trees; while Buckland woods darkened into ever deeper purple.
The extortions of some of the River inns, his son's trophies and adventures in South Africa, local drownings, his eeltraps, the winter floods, the former crazy lockhouse and weir, his own little commerce in rushes and produce: on these he will talk by the hour with many a bit of humour his impeded speech does nothing to diminish.
He was born at Perivale; and when the Brent flooded the churchyard and washed away the earth he used with other boys to p-p-poke the coffins with a stick and get the b-b-bones out! He is only "the b-b-boy" to his capable wife and pretty daughter, who are usually busy in the summer with holiday visitors.
My boat lies cosily in a tiny bay in his weir stream beneath the willows; and it has always been with real regret and many a backward look that I have let her float downstream, around around the bend and out of sight of this little haven of remoter Thames.
The lock is thickly embowered in trees, one a dainty symetrical little chestnut; and its white fences, and old barn usually decorated with the head of a pike, cling closely in the memory. 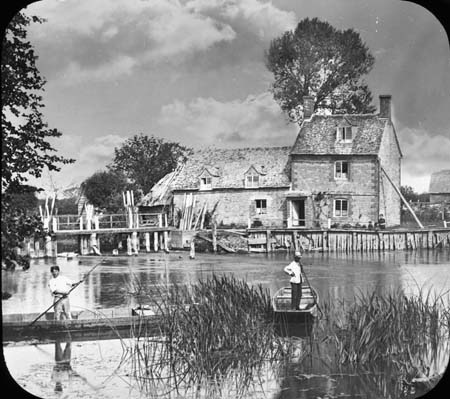 Site of Winney Weg's Weir may be just above  Rushey Lock or above Tadpole Bridge. One of Fred Thacker's maps seems to imply it was on the Isle of Wight Brook north of Tadpole Bridge.

Site of Old Nan's Weir a mile above Rushey Lock.
The next old weir site is Old Man's Weir. The similarity between the two names is striking - were they the same? Or was it just that there was some delight in the repetition?
1790: Mylne advised against a pound lock here.
1791:-

totally blown up; the water runs under the sill, and leaves only ten inches of water on the sill;  the whole obstructs the navigation in such a manner, that it is impossible to make any pen;  even the Navigation Shallop, after being lightened, was obliged to be lifted over with Leavers.

A Long swing bridge Over the Barge Canal as is nockt down by the Boats and all to pieces and lies in a daingerous Situation a Litle above Rushy pound Lock.  Built by the order of Mr. Clews placed in a Rappid Stream and a Daingerous place.

all open and no tackle in whatever;  to the detriment of the floating depth all the way up to the next sound pen.  No keeper in attendance, nor shelter for one of any sort, except an old willow.

At the end of a mile [above Rushey Lock] by the first white footbridge on the Berkshire shore, you pass the site of Old Nan's weir, "a small weir with merely a hut" wrote Fearnside about 1830.
A little further upstream on the Oxfordshire side, along a green ridge between high hedges, stands a gate hung upon two stone pillars which according to Tom Weal are the sole relics of Burroway Castle. He said they carry some carving or other, but all I could distinguish was an "A" upon one of them. He is my only authority for this scrap of topography, though the name is genuine enough; I already knew the Burroway Brook from some River map or other; it is an outfall leaving Thames on theRIGHT bank just below Old Man's Bridge. [And rejoining 400 yards above Rushey Lock]