A stone's throw from the river, a small cluster of houses, scarcely to be called a village, points out the site of ancient Siford, or Shefford; yet, on this lonely and isolated spot, now apparently far removed from human intercourse, the great Alfred held one of his earliest parliaments.

There sate, at Siford, many thanes, many bishops,
and many learned men, proud earls and awful knights.
There was Earl Alfric, very learned in the law,
and Alfred, England's herdsman — England's darling.
He was king in England:
he began to teach them, as we may hear
( i.e. as we shall hear in what follows ),
how they should live."

*The poem, of which this is the commencement, has been printed in the "Reliquae Antiqua" vol.I. p.170.
What a dream might have been enjoyed, resting under a hayrick the mowers had raised in a corner of the meadow in which this memorable event is said to have taken place !

1909: Shifford Lock in The Stripling Thames by Fred Thacker

[Shifford Lock] can present a picture of the bleakest misery in the cold rain and blustering wind of an unseasonable August. The Southwest always seems to rage down between the tall reeds that line the narrow course, as though the wind had a perpetual appointment here with the devil ...
What a long chase I once had after an absurd panama, elusive, half sunken, my craft almost unmanageable under the rioting gale.

The present [Shifford] Lock is the newest foundation on the river; it was not even discussed before April 1896.  The lock cut was engineered in part from an old side channel.  The weirs at its head and against the lock are both entirely modern.

Towards the end of 1896 the Ecclesiastical Commissioners, in view of the approaching completion of the lock, interceded on behalf of certain of their tenants at Chimney, who had been in the habit of going to church by water:  I presume at Shifford.  The Conservancy granted free lock passes for the purpose. 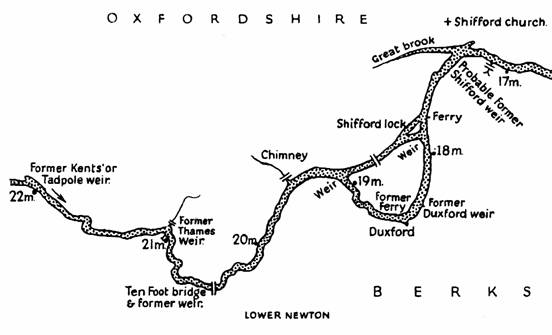